A sign is posted "COVID-19 testing in NOT available at this location," on the doors of a CVS pharmacy in Los Angeles Wednesday, Feb. 3, 2021. California's rollout has been bumpy and chaotic, marked by differing county rules and too little vaccine. The Biden administration has pledged to ramp up delivery, and on Tuesday, Feb. 2, CVS pharmacies announced it would start inoculating people in some California stores next week.

NPR/Marist poll: Biden gets high marks on COVID-19. It’s not the case on immigration

Two-thirds of Americans approve of the job that Biden is doing with the pandemic. That includes almost a third of Republicans.

(Washington) — Americans say President Biden is faring well when it comes to his handling of the coronavirus pandemic and, to a lesser extent, the economy, a new NPR/Marist poll finds. But immigration looks like it will continue to be a thorn in the president’s side.

The survey out Tuesday also finds that an increasing number of Americans now say they will get a COVID-19 vaccine when one becomes available to them — bringing the U.S. closer to the range that scientists say is needed to reach a safe level of immunity that will stem new outbreaks of the coronavirus. But there are clear disparities by race on who has already gotten the vaccine.

Two-thirds of Americans approve of the job that Biden is doing with the pandemic. That includes almost a third of Republicans. Overall, the president’s approval rating is up to 52%, and his handling of the economy has now reached 51%. 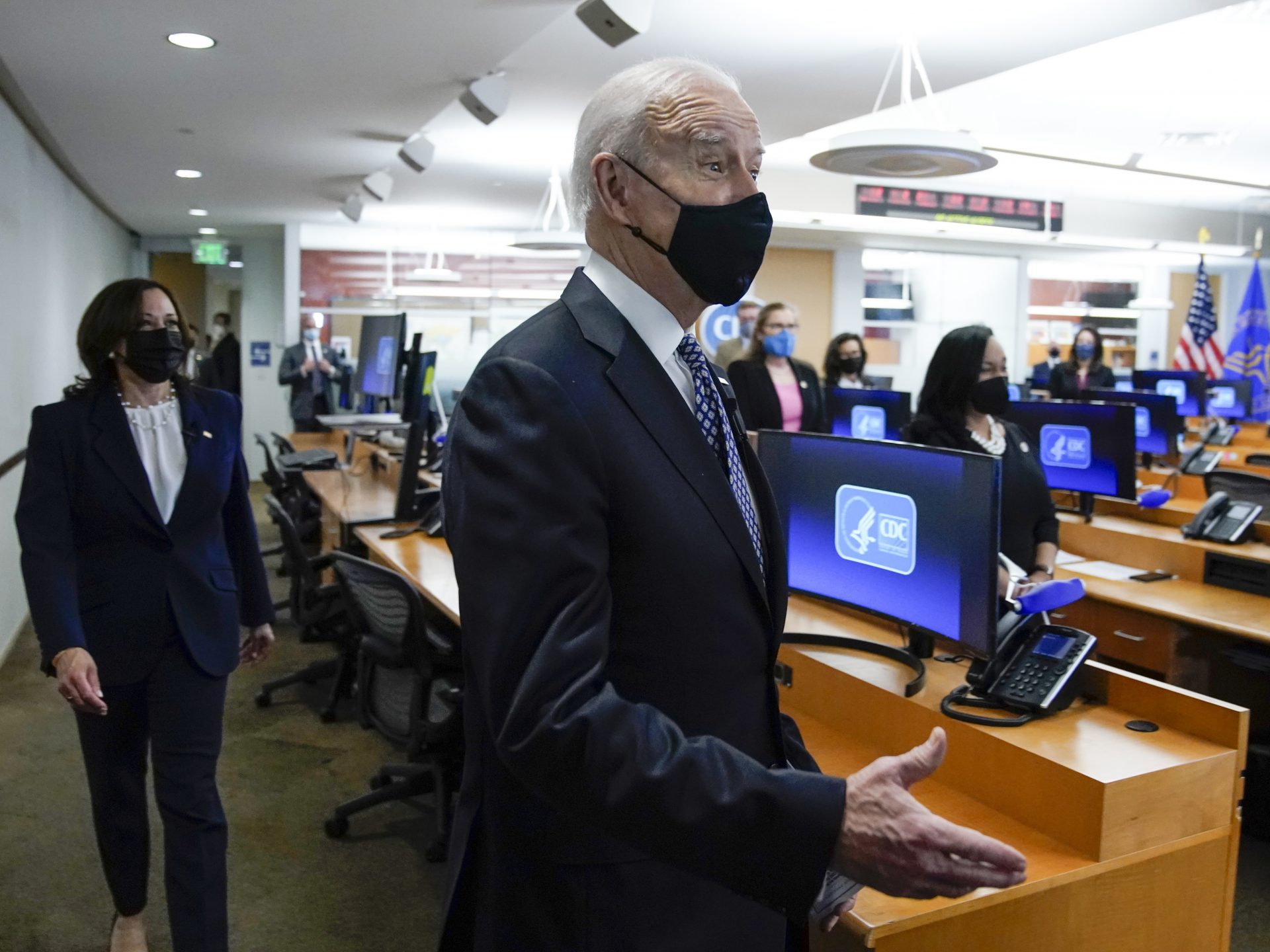 President Joe Biden and Vice President Kamala Harris arrive for a COVID-19 briefing at the headquarters for the Centers for Disease Control and Prevention, Friday, March 19, 2021, in Atlanta. (AP Photo/Patrick Semansky)

All three are improvements from a poll conducted earlier this month.

But just 34% of Americans approve of Biden’s handling of immigration, while 53% disapprove. A majority of independents and even a quarter of Democrats disapprove of the job he’s doing on the issue.

The findings are a warning sign for the Biden administration as it grapples with a surge in migrants at the southern U.S. border, many of them unaccompanied minors.

Biden has blamed the Trump administration for what he calls immoral practices and for dialing back capacity to hold people who cross the border. Republicans say that Biden has reversed Trump-era policies that worked and that his softer tone on immigration has been a magnet for those fleeing difficult conditions in Central America.

The survey of 1,309 adults, who were contacted on cellphones and landlines by live callers, was conducted March 22 to 25. The poll has a margin of error of plus or minus 3.4 percentage points. In other words, results could be 3.4 percentage points lower or higher than the shown result. The margins of error are bigger for political subgroups.

When it comes to COVID-19 vaccinations, 70% of American adults now say they either have gotten at least one shot of the vaccine already (36%) or will get it when one becomes available to them (34%).

That’s a steady increase from 62% in February and then from 67% earlier this month. 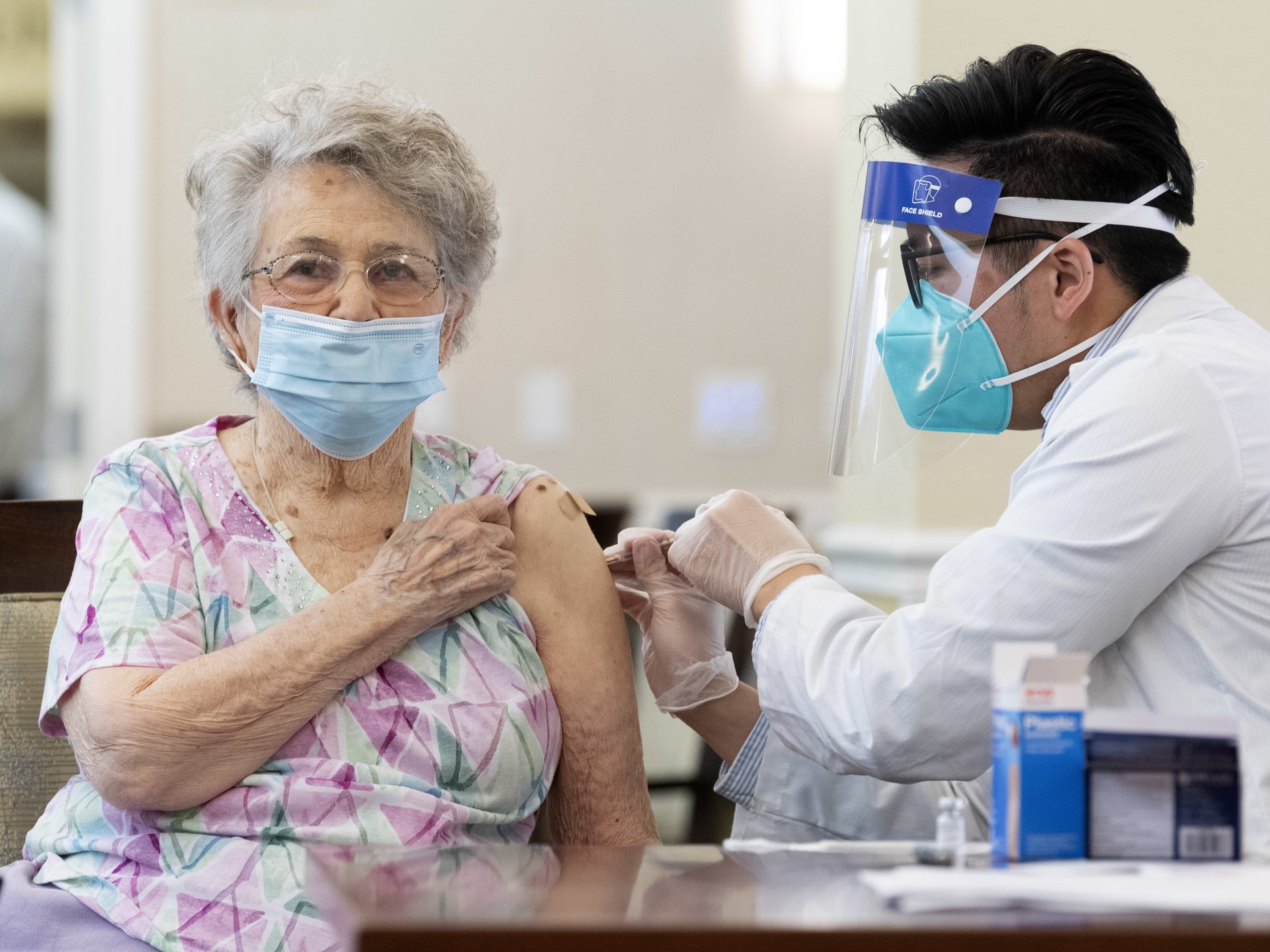 ANAHEIM, CA – JANUARY 08: A CVS pharmacist gives the Pfizer/BioNTech COVID-19 vaccine to a resident at the Emerald Court senior living community in Anaheim, CA on Friday, January 8, 2021. The vaccine was optional for staff and residents.

The change, according to the newest poll, is largely because of Republicans becoming less hesitant. Supporters of former President Donald Trump and Republicans are still the least likely to get the vaccine, but they are marginally less likely to say they won’t get it now, as compared with earlier this month.

The new survey found little to no difference when it comes to vaccine reluctance by race — about a quarter each of whites, Blacks and Latinos said they would not get it if one comes available.

But more whites are getting vaccinated than Blacks or Latinos. Forty percent of white respondents said they’ve gotten a shot, compared with 34% of Blacks and just 28% of Latinos.

The survey comes a day after Biden warned about rising numbers of coronavirus cases.

“We’re in the life-and-death race with a virus that is spreading quickly, with cases rising again,” Biden said at the White House on Monday afternoon. He added, “We’re giving up hard-fought, hard-won gains. And as much as we’re doing, America, it’s time to do even more.”