Landlord Stephanie Graves walks to the main office at one of her properties in Houston with a resident. She's going door to door offering to help residents apply for rental assistance money approved by Congress that's just starting to flow to landlords and tenants.

Currently, there's an order from the Centers for Disease Control and Prevention aimed at stopping evictions. But it has loopholes and it expires in two weeks. 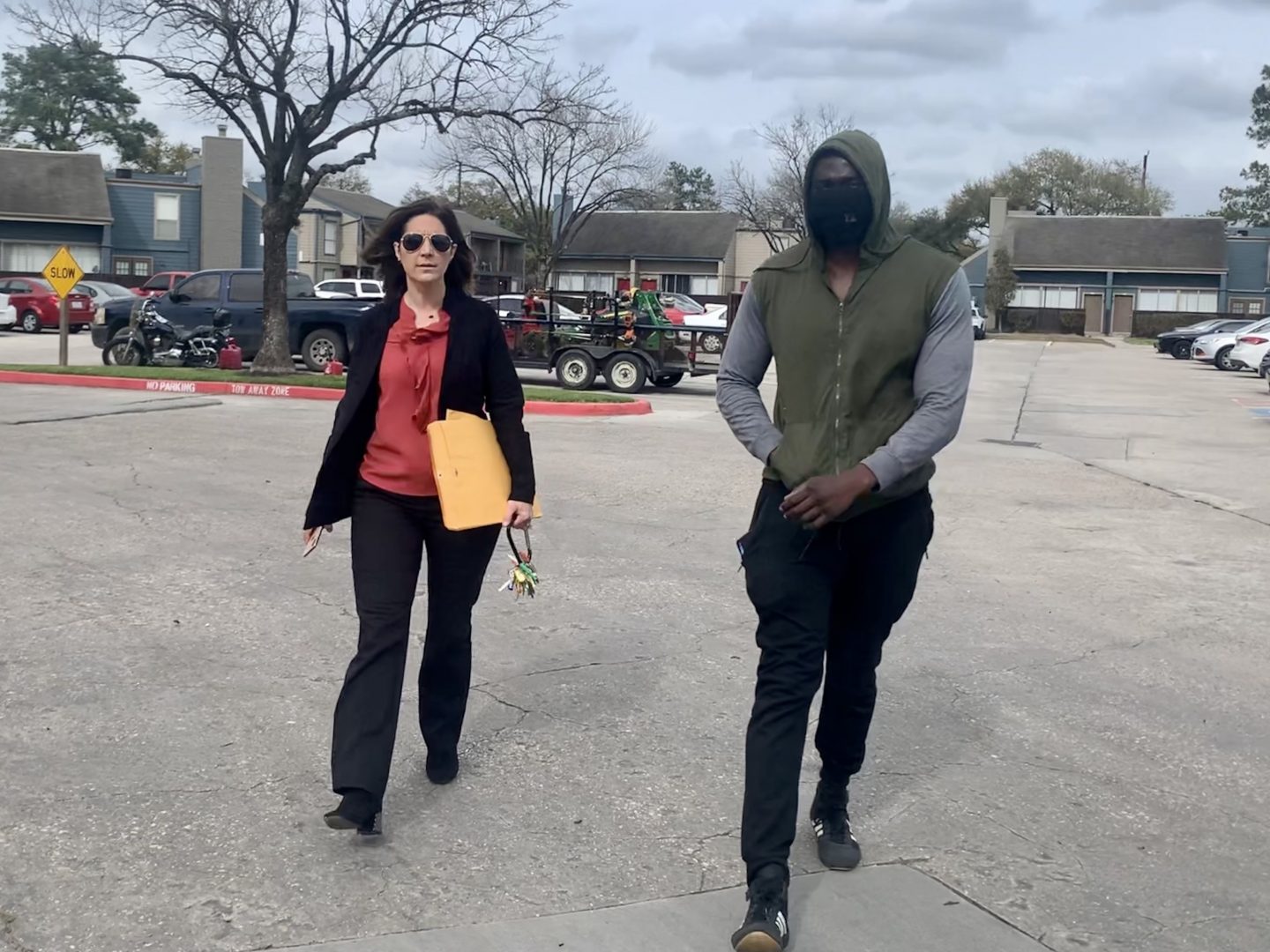 Landlord Stephanie Graves walks to the main office at one of her properties in Houston with a resident. She's going door to door offering to help residents apply for rental assistance money approved by Congress that's just starting to flow to landlords and tenants.

(Washington) — Nearly 10 million Americans are behind on their rent payments, according to the U.S. Census Bureau. And Stephanie Graves is seeing that play out first hand. She’s a landlord in the Houston area and says tenants in most of her buildings are struggling.

Graves says she isn’t evicting any tenants who try to pay what they can and stay in touch with her. But that means she’s losing money — the rents coming in don’t cover her mortgage payments and paying the staff.

“Then we had the freeze in Houston and the hot water heater gave out.” Graves says that meant a $22,000 investment with no income. “I worry, how am I going to pay that loan if this goes on for much longer?”

Graves says a bigger property she manages for another owner is hundreds of thousands of dollars behind on revenue with all the unpaid rent and COVID-19 related costs. “It’s scary,” she says. “It’s a scary situation”.

Graves says many of her properties have cut services. If a security gate breaks, she says she doesn’t have the $5,000 to fix it. The pools and fitness rooms at some of her properties are closed — she can’t afford the extra cleaning and staff related to COVID-19. Then she says people who are paying rent get upset about that and take it out on her property managers.

“People are stressed out, people are angry,” Graves says. “People are home more.”

Graves really wants her tenants to be able to get help. Between the last two COVID-19 relief measures, Congress has approved upwards of $50 billion in rental assistance money. And that is just now starting to become available.

Graves is going door to door telling tenants to come to the main offices at her properties, where she’s set up computers to help people get the documents together that they need and to apply.

Other landlords are doing that too.

“February looked really scary for us,” says Kelle Senyé, who oversees about 400 affordable housing units around Albuquerque, N.M. She says more than a quarter of those were behind on rent payments last month. And she’s just found out that residents can now apply for the federal money approved by Congress.

“It was like this mad rush yesterday,” she says. “Lets make sure that all of our residents know that this assistance is available.”

Senyé says she’s not evicting anybody for non-payment of rent during the pandemic.

But many other landlords have not been so understanding. Some have been aggressive about evicting people who’ve lost work and fallen behind on rent. And so housing groups say protections are needed as this money gets flowing.

“Every one of these eviction cases carries serious consequences,” says Peter Hepburn, an assistant professor at Rutgers University and a researcher at Princeton University’s Eviction Lab, which is tracking evictions during the pandemic.

Currently, there’s an order from the Centers for Disease Control and Prevention aimed at stopping evictions. But it has loopholes and it expires in two weeks.

“What we’re worried about is that if those protections are allowed to lapse,” Hepburn says. “We could see a million eviction cases filed in very short order across the country.”

That is, a million people and families getting an eviction on their record. Hepburn says that hurts their ability to find other housing and hurts their credit. And research has shown that evictions spread COVID-19 because people double up with other families and live in more crowded situations.

The $50 billion worth of money for rental assistance, which includes back rent, has been approved by Congress. But Hepburn says it hasn’t reached the vast majority of people yet.

“That’s making its way through the system,” he says. “There’s a lot of damage that could be avoided if we took the time and we allowed that money to work.”

He says the CDC order should be extended and strengthened, with evictions on pause because it’s likely to take months for the rental assistance money to reach the people who need it.