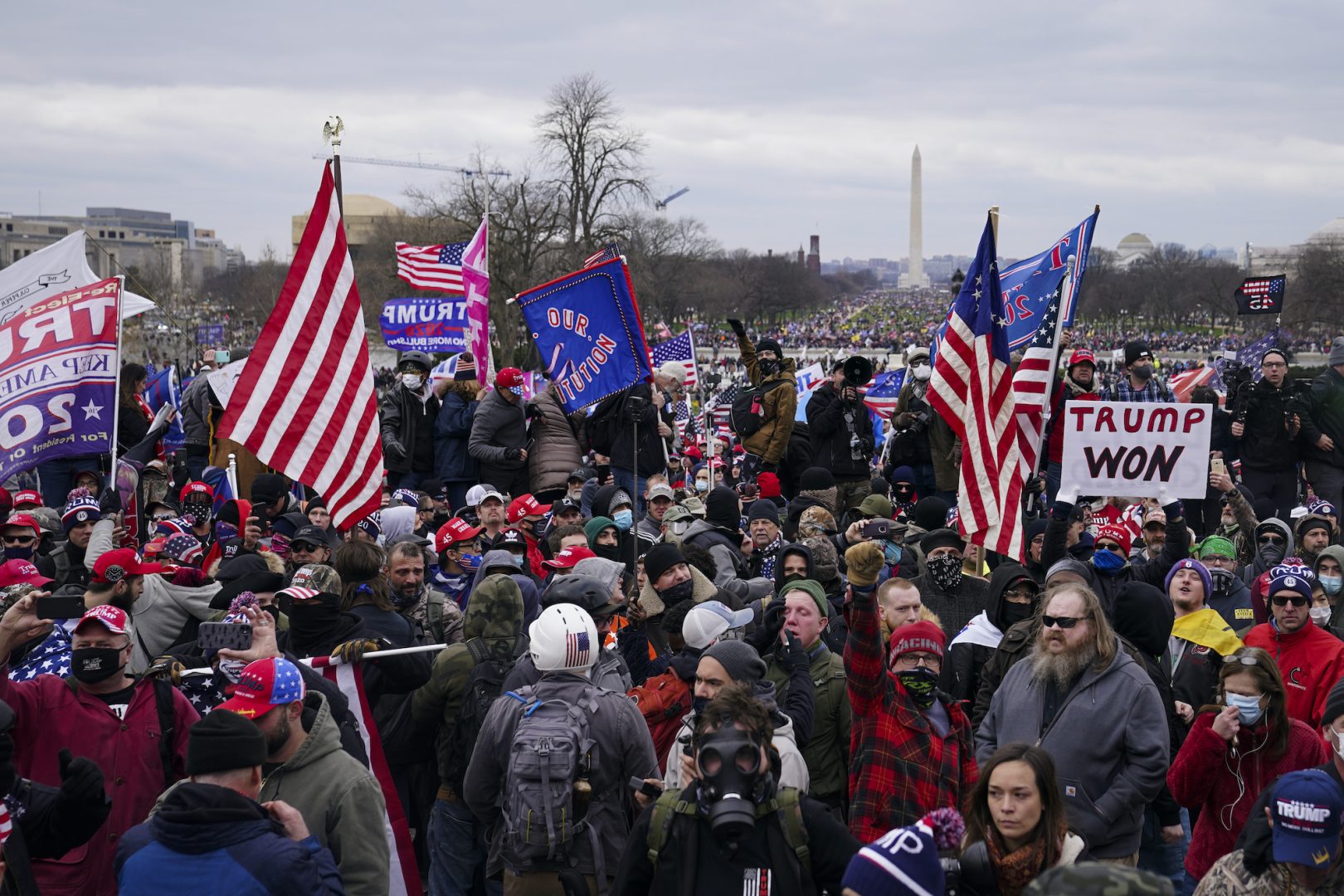 (Philadelphia) — A New Jersey native who until recently operated a smoothie franchise near Penn State is facing multiple federal felony charges for an alleged assault that preceded the death of a Capitol Police Officer Brian Sicknick in the aftermath of a Jan. 6 Trump rally that ended with the storming of Congress.

Julian Khater, who was linked to State College, Pa. in charging documents, and George Tanios, of West Virginia, were both arrested Sunday and face multiple felony charges for allegedly “working together to assault law enforcement officers,” including Sicknick, after the rally.

The pair grew up together in New Jersey but left the area to operate fast-food franchise locations in university towns: Tanios ran a deli in West Virginia while Khater opened and managed a smoothie shop in State College.

The pair reunited to attend the Jan. 6 “Save America” rally, along with thousands of other Trump supporters in an effort to overturn the results of the 2020 General Election.

According to charging documents, the duo are visible on surveillance footage and online videos of the day’s events approaching a police barricade. Khater is audible on a video indicating that he had been pepper sprayed by police and appears to retrieve a canister of bear mace or a similar chemical repellant from Tanios’ backpack to retaliate. 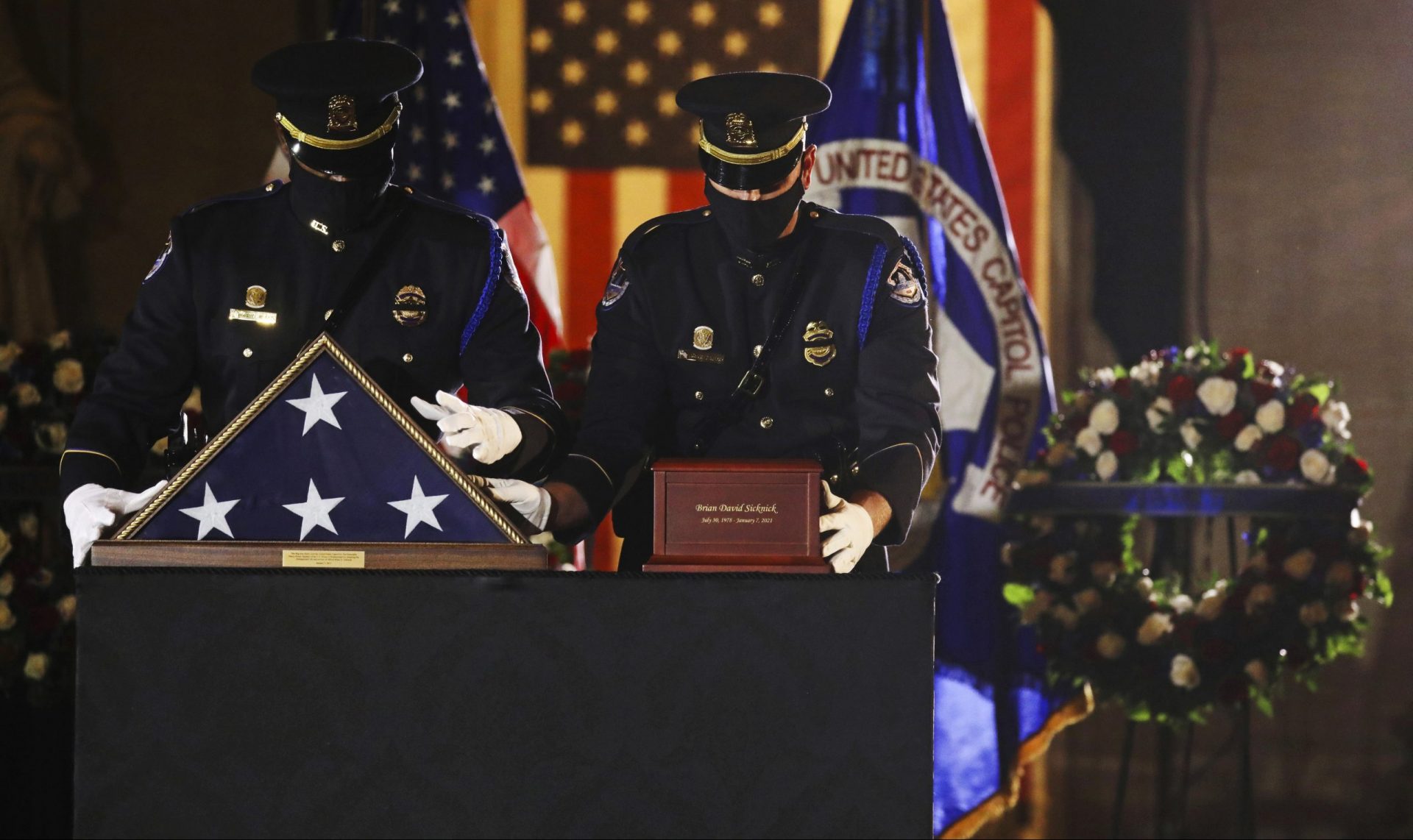 An honor guard places an urn with the cremated remains of U.S. Capitol Police officer Brian Sicknick and folded flag on a black-draped table at center of the Capitol Rotunda to lie in honor Tuesday, Feb. 2, 2021, in Washington.

Sicknick and two other police officers were also standing near the barricade. One of the officer’s body-worn cameras captures Khater aiming the canister at the trio of officers and firing, hitting all three with a chemical substance and temporarily blinding them. The officers retreated from the barricade to flush their eyes.

Khater continued discharging the canister until another police officer noticed the activity and fired pepper spray in return, forcing the man to disperse.

Sicknick was maced again later in the day and eventually collapsed. He was hospitalized, suffered a stroke and a blood clot before being placed on a ventilator. Sicknick died the day after the rally from a cause that remains unknown.

Khater and Tanios were arrested after a former smoothie shop coworker recognized Khater and notified federal authorities. Another tipster recognized Tanios and investigators eventually traced a hoodie that read “Sandwich University” back to Tanios’ deli.

In October of last year,  Tanios reported that his sandwich shop had been targeted in a “hate crime” because of a Trump 2020 sign in the window, according to The Voice of Morgantown, a newspaper in the West Virginia town where he opened his business.

“My son’s godfather actually hates Trump with a passion, but we’re still friends,” Tanios told the newspaper. “To come bash my window, threaten my business and go on Google and leave these reviews that can’t be taken down, calling us racist is just completely absurd.”

Khater was active on LinkedIn, where he described himself as an “experienced general manager looking for new and exciting opportunities.”  He listed himself as having previously owned franchises of the smoothie shop Frutta Bowls in State College, Pa. and Chapel Hill, NC. He indicates roots in Somerset and lists a bachelor’s degree in business administration and management from Fairleigh Dickinson University.

He also frequently liked posts on LinkedIn, including one from the eve of the 2020 election, featuring a picture of a smiling couple beside yard signs for Donald Trump and President Joe Biden.

It told readers, “despite tomorrow’s results, to [love] each other. Don’t let politics make you forget about PEOPLE. That’s why this is supposed to be so important.” 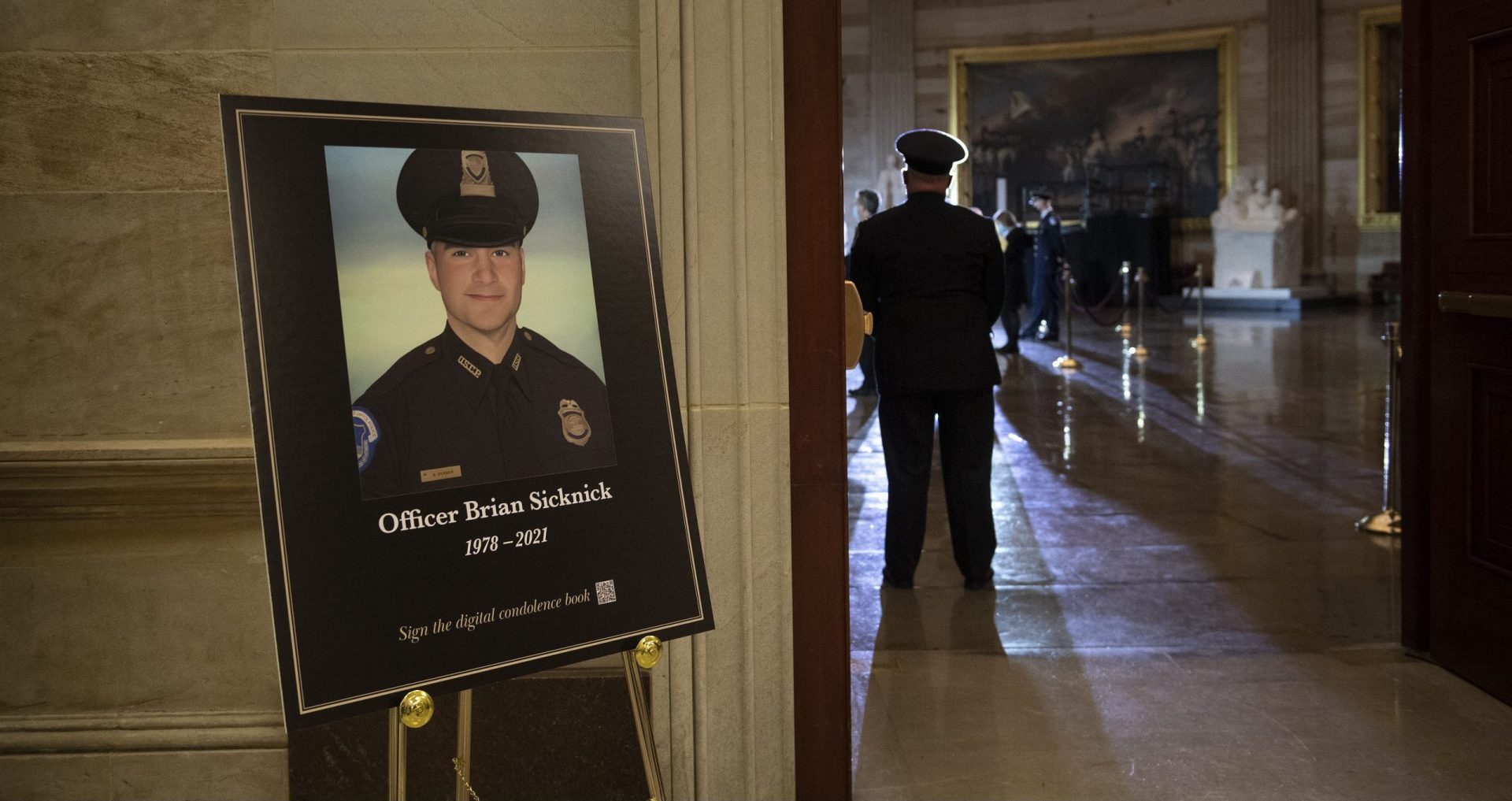 In this Feb. 2, 2021, file photo a placard is displayed with an image of the late U.S. Capitol Police officer Brian Sicknick on it as people wait for an urn with his cremated remains to be carried into the U.S. Capitol to lie in honor in the Capitol Rotunda in Washington. Federal investigators probing the death Sicknick, a U.S. Capitol Police officer killed in the Jan. 6 riot, have zeroed in on a suspect seen on video appearing to spray a chemical substance on the officer before he later collapsed and died, two people familiar with the matter told The Associated Press.

The circumstances surrounding Sicknick’s death remain unclear, and a final cause of death has not been determined. Capitol Police have said he died after he was injured “while physically engaging with protesters” and the agency’s acting chief said officials consider it a line-of-duty death.

The Justice Department opened a federal murder investigation into his death, but prosecutors are still evaluating what other specific charges could be brought in the case and the probe continues, officials have said.

The FBI has already released about 250 photos of people being sought for assaulting federal law enforcement officers during the riot. Some have already been arrested, and the Justice Department said about 300 people have been charged with federal offenses related to the riot.