As the coal mining industry contracted, Greene County, Pa. faced an uncertain future. Then came the natural gas boom. So why is the county nearly broke roughly 10 years later?

Commissioners, led by Republicans, raised taxes amid a pandemic and for the first time since 2010, despite the county having received more than $37 million in gas impact fees. 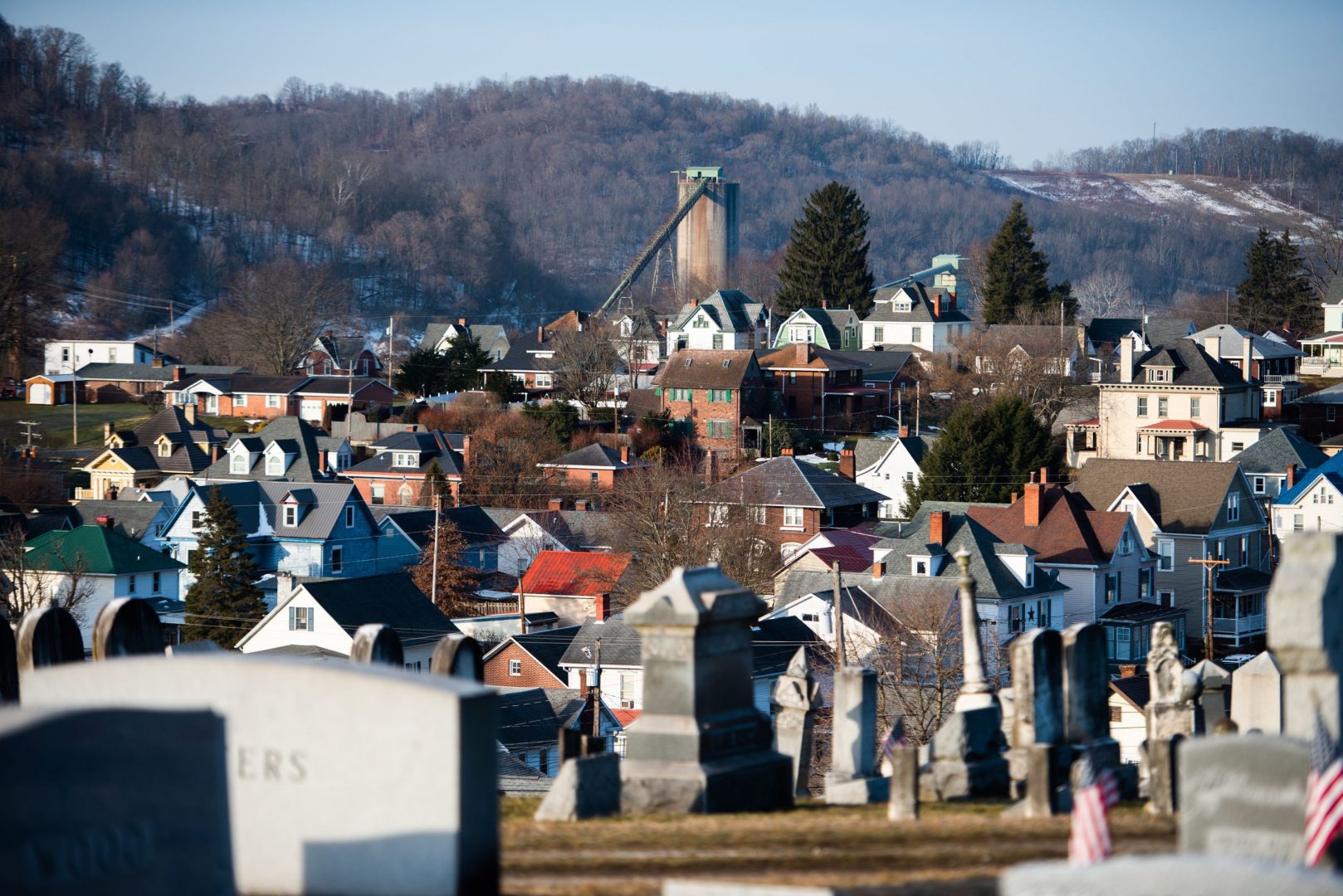 As the coal mining industry contracted, Greene County, Pa. faced an uncertain future. Then came the natural gas boom. So why is the county nearly broke roughly 10 years later?

Despite receiving millions in payouts from the natural gas industry to compensate counties like Greene that host natural gas wells, it is struggling to balance its more than $40 million budget. This year, amid a pandemic, commissioners raised property taxes for the first time since 2010.

Without major changes, county budget office projections show that Greene may not have the revenue or reserves to cover its costs by 2023.

It’s a financial predicament that seemed all but guaranteed as the coal mining industry here has nearly disappeared, hollowing out the backbone of the local economy. That was, until the natural gas boom — and a massive influx of money that came with it — offered a different path.

The windfall seemed to buy Greene County time to figure out how it would survive without coal. 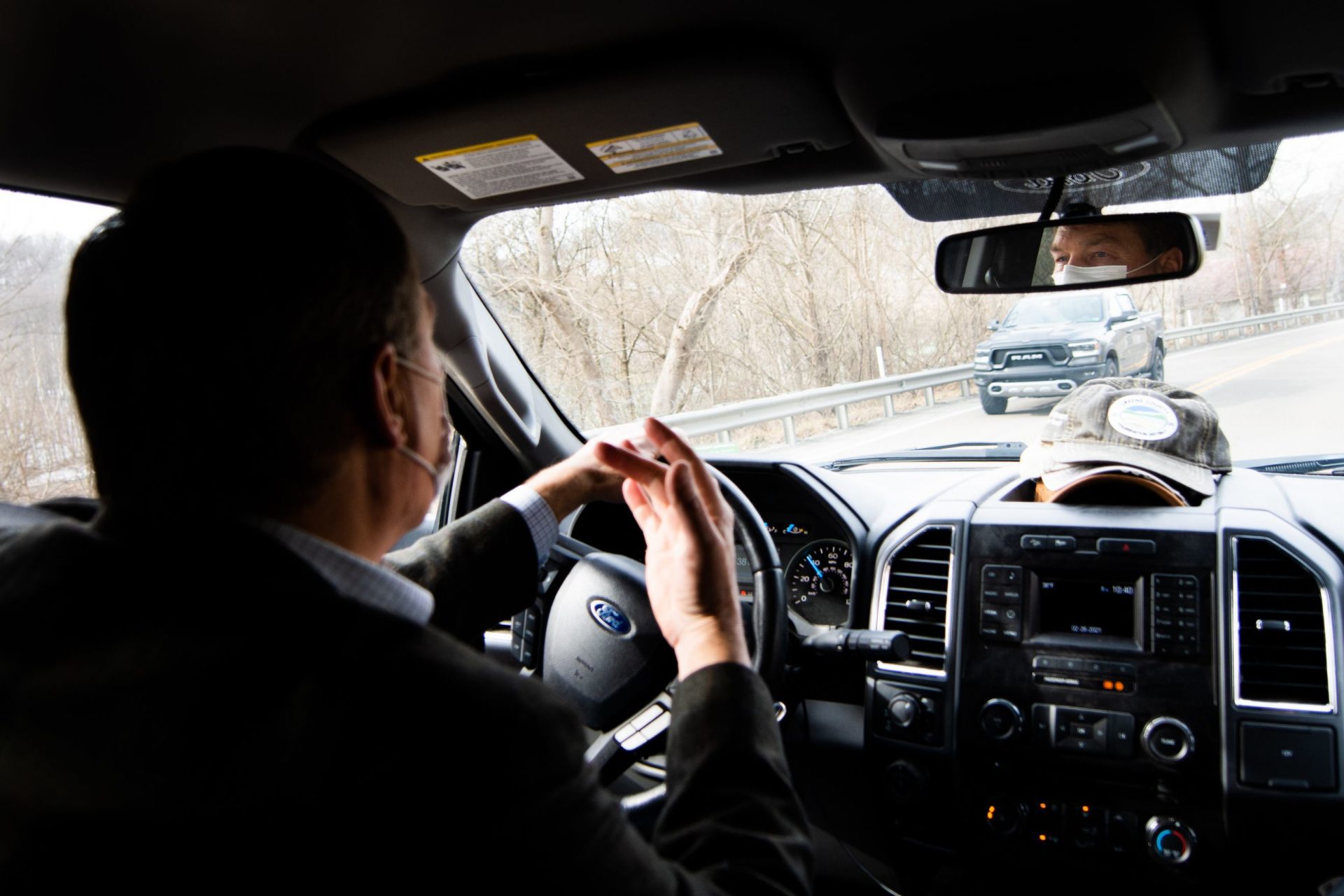 Greene County Commissioner Mike Belding gives a tour of Greene County, which is nearly broke after years of what he calls poor financial management.

But nearly 10 years and more than 1,000 natural gas wells later, the county appears to be no better off financially than where it started, having spent through $37.2 million in impact fees without setting aside money to plan for the day the work would inevitably slow.

“I quickly came to realize there was no fiscal planning,” said Mike Belding, one of two new county commissioners on the three-seat governing body. “They were just spending money as it came in.”

Greene, home to 36,000 residents, is one of 31 counties statewide receiving “impact fee” payouts through a state program initiated in 2012, called Act 13. The funds are distributed yearly, and payouts are based on factors like the number of wells in an area and population.

Only three other counties — Bradford, Susquehanna, and Washington — have received more money than Greene from the impact fees over the lifetime of the program, according to reports filed with the Pennsylvania Public Utility Commission.

But unlike others that set the money aside and saved it for future investments, budget reports show Greene has used about $17.5 million to balance its budget since 2015. The other half went to projects that the newest commissioners say were shortsighted and wasteful, like commissioning a $400,000 comprehensive plan that was never used and a $550,000 business loan program that yielded no returns for the county.

Belding and the other new county commissioner, Betsy McClure, both Republicans, have promised to stop using the impact fees to balance the budget each year. So far, they have set aside about $4.5 million to use for future projects like repaving roads, developing recreation areas, and expanding broadband internet.

That didn’t come easy, Belding said. Not relying on the impact fees meant finding other ways to fill a $5 million hole in the 2021 budget.

“We tried every other opportunity we could, slashing all those expenses,” Belding said. “We just couldn’t get there. So we made the hard decision to increase taxes.”

The decline of the coal industry here is inescapable. Just outside Waynesburg, the center of county government, the Emerald Mine looms idle. It is one of nine that were operating in 2011, state Department of Environmental Protection records show.

But by 2015, Emerald Mine shuttered its 38-year-old business, citing depleted reserves, a slowing market, and a challenging regulatory environment. About 300 people lost their jobs, and the mine’s green towers and endless rails stand as a constant reminder.

By 2019, the number of active mining sites dropped from nine to four, and the county population shrank by about 2,500 residents.

“We’re playing catch-up from decades ago,” said Commissioner Blair Zimmerman, a Democrat who has served on the board since 2012 and worked on the surface at the Cumberland Mine for more than 40 years. He previously served as mayor of Waynesburg. 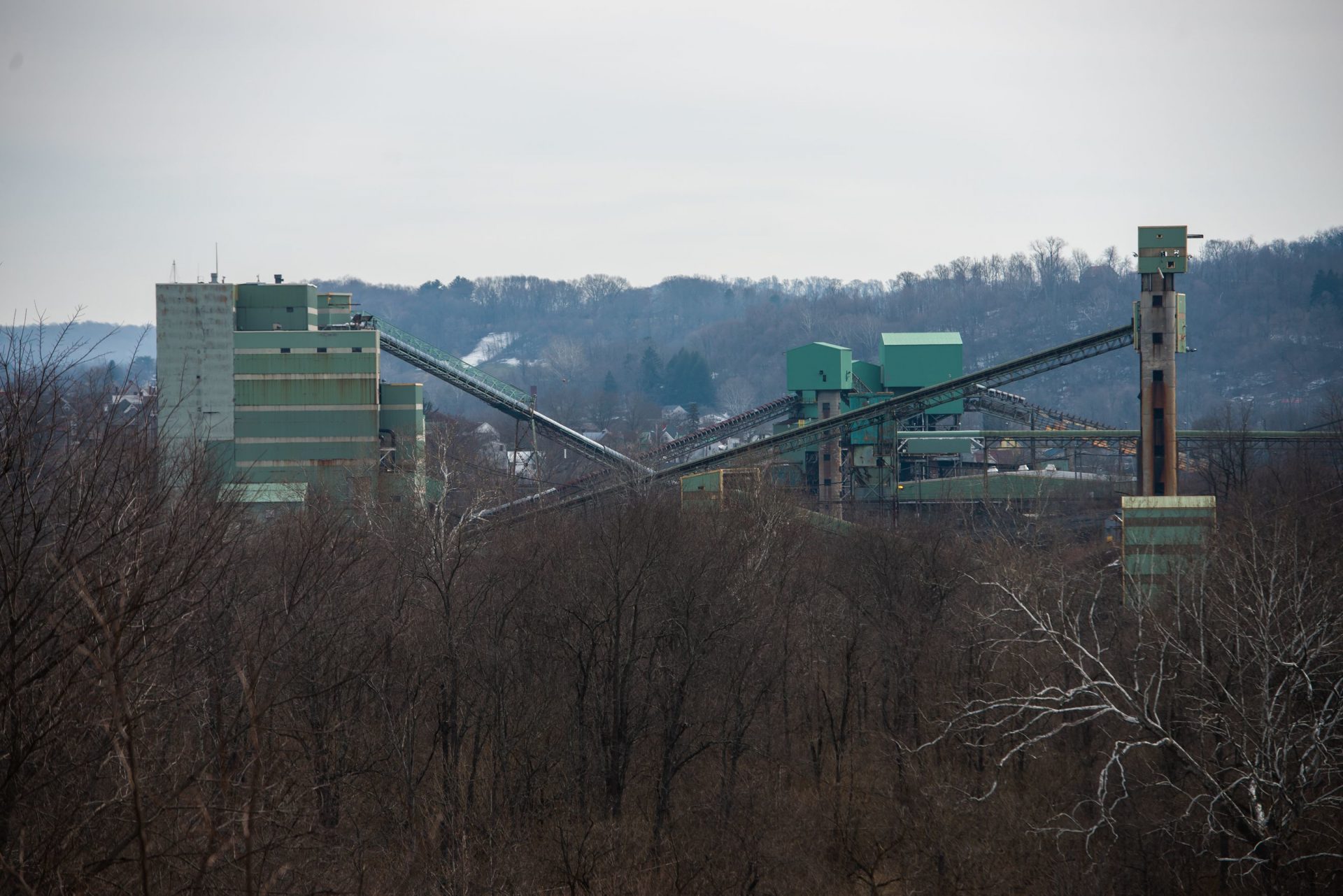 Towering remnants of the abandoned coal mine known as Emerald Mine are seen on the outskirts of Waynesburg in Greene County.

He and the other two commissioners said the county should have started planning for how to transition from relying on coal long ago, and now, it is paying the price for that inaction.

In the first year of the program, Greene County was compensated $3 million. At the same time, temporary workers hired by gas companies to construct hundreds of new wells drove up demand for rental properties, Belding said. Properties that rented for about $500 to $600 per month went for more than $1,200, and new hotels were built to accommodate the workforce.

Local businesses and restaurants were boosted, and about 10 years ago, a Walmart joined the ranks of fast-food restaurants and gas station chains just off the interstate.

The county was home to 1,257 natural gas wells and collected an average of $4.1 million in impact fee payments annually as of 2019, the most recent year for which data is available.

“It’s a windfall,” Belding said. “It’s like winning a little bit of the lottery. Getting an influx of money from something that’s unexpected.”

As the gas industry started to slow, however, so did the number of workers from out of town who were spending on hotels and the local economy. Energy companies are drilling fewer new natural gas wells, so Act 13 payouts are expected to decrease as well.

The county also expects at least two more mining operations to wind down in the next two years.

Other rural counties in Pennsylvania are dealing with similar challenges, said Lisa Schaefer, executive director of the County Commissioners Association of Pennsylvania, which supports county governments throughout the state. 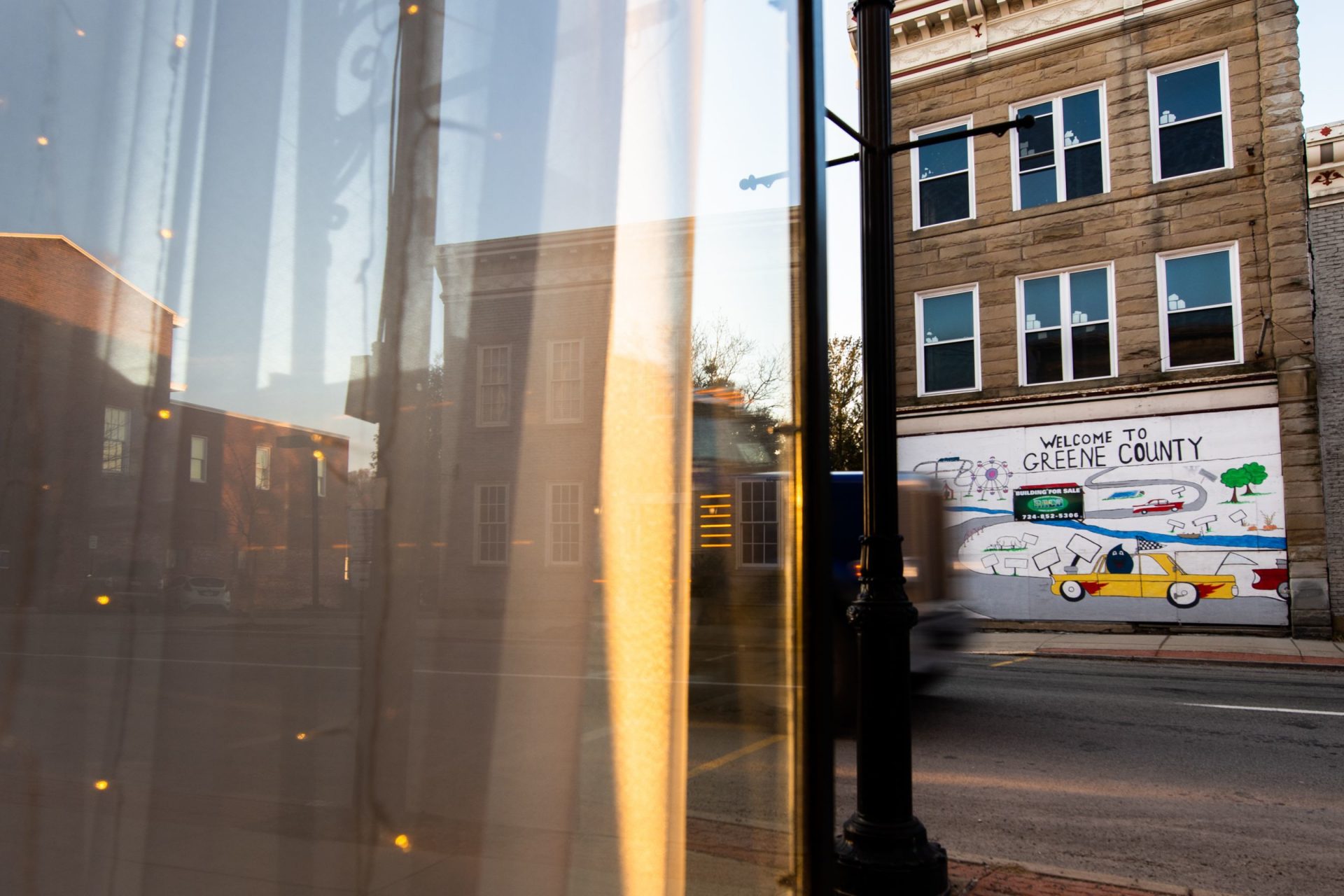 Of the 13 new businesses that held ribbon-cutting ceremonies with Greene County in 2019, 12 replaced previously filled storefronts.

Many have small commercial tax bases but large areas of protected state land like game areas, parks, and forests, which are not taxed. Shrinking populations mean there are fewer people left to share the property tax burden. Those who are left tend to be older residents who are already out of the workforce.

Counties need to make money so that they can provide services like mental health support, drug and alcohol programs, and children and youth services — programs that have seen tens of millions of dollars in cuts at the state and federal levels in recent years.

“So if support from those levels keeps declining too, it makes it harder and harder for counties to make up the difference, particularly when they only have property tax to turn to,” Schaefer said.

Counties have broad discretion in how they spend impact fees, but they are required to report the details to the Pennsylvania Public Utility Commission, and those reports are public online.

Records show that Greene allocated millions to categories like public infrastructure construction, social services, and public safety, but they don’t show exactly how it was disseminated. And in the past nine years, none was spent on planning initiatives, tax reductions, water preservation, or career and technical centers.

By contrast, Bradford County reported having deposited about $23.8 million of its Act 13 payments in its capital reserve fund. Washington, Greene’s more populous neighbor to the north, set aside $37.1 million in reserves, records show. But Greene County only set aside about $1.2 million for capital reserve.

“For years before, it has been hard to have county leadership that is just pretending coal is going to keep advancing at the same pace that it was,” said Veronica Coptis, a Greene County native and executive director of the Center for Coalfield Justice, a nonprofit based in Washington County that advocates for communities where fossil fuel extraction takes place.

She’s been working on issues related to economic development in the region for the past seven years.

“It is definitely a turning point to see elected officials acknowledge the reality of our economic crisis,” Coptis said.

Residents often tell her their communities need investment in basic infrastructure. That includes tackling issues like blight, or repaving roads and sidewalks, she said.

“They need to be able to trust their water,” she added. “Their schools need to be good.”

Bob Morris, 58, opened Burgers and More — a walkup sandwich shop serving beef off his own farm — on State Route 21 in Waynesburg about a year and a half ago.

He expected most of his customers to be truckers hauling fuel and equipment for local drilling operations. Instead, the majority are local residents looking for alternatives to fast food chains — the only businesses that seem to be able to survive, Morris said.

His niece, Kelli Bosworth, helps run the kitchen. Even on a chilly Friday in late winter, there’s a steady lunch rush, and Bosworth juggles answering the phone and taking walkup orders. 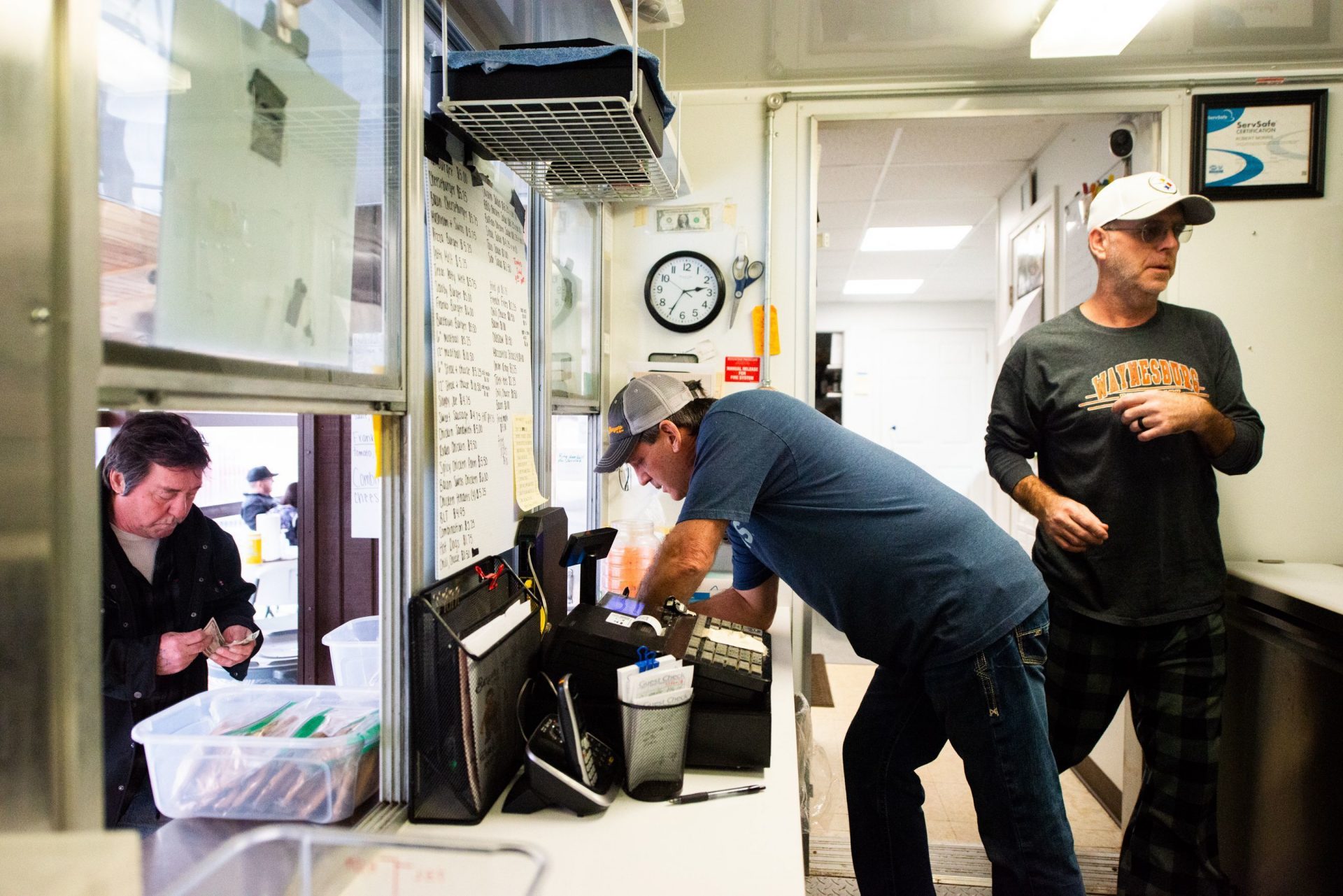 Bob Morris, center, owner of Burgers & More, takes a customer order while working with his brother, Scott Morris, right, at the family burger business in Waynesburg. Morris said he has plans to expand his shop in the summer to also serve ice cream for locals.

As a 34-year-old mother of four, Bosworth said she’d like to see more opportunities for her kids — safe places like parks or pools where they can play, access to the internet, and education.

About 20% of households in the county had internet access in 2018, census data shows. Last spring, about 40% of the county’s 4,652 elementary and high school students did not have access to online coursework when schools closed at the start of the pandemic, according to county estimates.

It’s an improvement that longtime Greene business owner Johnny Humble said is critical if the county is going to attract — and keep — new businesses and residents. Of the 13 new businesses that held ribbon-cutting ceremonies with the county in 2019, 12 replaced previously filled storefronts, Belding said.

Humble has run his business for 47 years, first with his father, then on his own as Humble Carpet and Decorating Center for the past 25 years. He still lays flooring with his son every day.

Though many of his clients are local, having a website and social media presence was critical to helping his business survive and grow, even before the coronavirus pandemic hit and he was forced to limit in-person meetings with potential customers, Humble said.

Life along the Delaware: Giving city communities a chance to know the waterways all around us