“It’s the still biggest event that has ever happened in the history of sports."

(Feasterville) — Smokin’ Joe Frazier stood fearsome in bronze, his frozen left hook on the brink of connecting with Muhammad Ali, much as the power punch did 50 years ago in the Fight of the Century.

Linked forever by a trilogy of bouts, it’s the first meeting — won by Frazier when he slugged his way to the heavyweight title on March 8, 1971 by becoming the first boxer to defeat Ali — that defined Frazier’s career and helped his legacy live on in his adopted hometown of Philadelphia nearly 10 years after his death.

“It’s the still biggest event that has ever happened in the history of sports,” Joe Frazier Jr. said on Monday.

Frazier, naturally, has good reason to believe a fight that transcended boxing and touched on political and social themes of the day — oh, and left both fighters hospitalized — could stand as the greatest.

He’s not alone in that opinion.

The 15-round spectacle between undefeated, Olympic champions is at least on the short list of the 20th century’s most enduring sporting events.

His fans — new and old — family and friends in Philadelphia are determined not to let anyone forget his legacy.

Frazier was feted throughout the area on Monday on the anniversary of his decision victory with both a 9-foot-tall, 1,600-pound statue — earmarked for a planned Pennsylvania sports museum — and a mural in North Philly.

His statue was unveiled at a new gym owned by Joe Hand Promotions, whose founder formed a group called Cloverlay and helped bankroll Frazier early in his career. Hand and his family, who long had a vested interest in Frazier, spoke of the champ who “had the biggest heart” at the gym in lower Bucks County, just north of Philadelphia.

Two of Frazier’s sons and one daughter were among the family members that attended the unveiling of the statue that stands inside the gym’s window and is visible from the street. 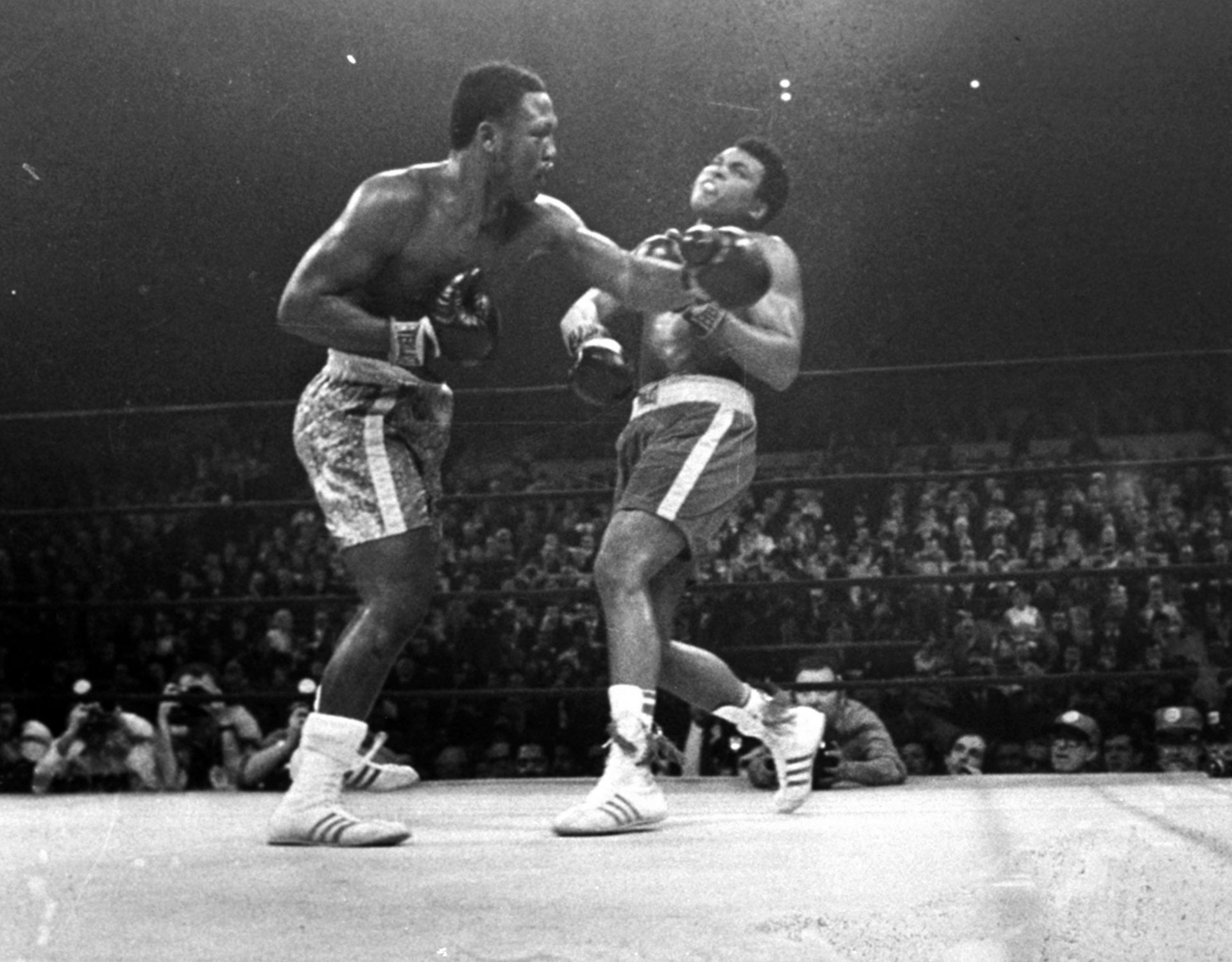 Patricia Hand, who worked for a law firm that represented Frazier, typed the contract for the fight and recalled mingling with the A-list celebrities and politicians who all wanted a seat that night at Madison Square Garden.

“I can’t believe 50 years later it has this interest,” she said.

She was the only woman allowed at a lunch at famed New York sports watering-hole Toot’s Shor after the contract signing and sat next to Frank Gifford. Hand even recalled one hiccup when Ali hugged Frazier after they signed the deal.

“Frazier stood with his hands to his side and the back of his jacket split,” she said. “He took great care in how he looked that day and they had to send somebody from Madison Square Garden out to get him a jacket.”

His win over Ali was played on a loop at Joe Hand Gym, and one of the few remaining original promotional banners — its corners frayed by time — was raised at a ceremony where Frazier seemed Smokin’ one more time.

“It just means so much just to see the accolades, the admiration, how much people revere not just Ali, but my father,” Frazier Jr. said. “They both have a story. We loved Ali just as much as we love Frazier. At the end of the day, this was the one my father was victorious in.”

The mural is emblazoned with one of Frazier’s favorite sayings: “There is no right way to do wrong and there is no wrong way to do right.”

Frazier already has a statue at an entertainment complex near Philadelphia’s three sports stadiums near the now-demolished Spectrum, an arena where he fought. Frazier, who died Nov. 7, 2011 after a brief battle with liver cancer at the age of 67, spent much of his life in his adopted hometown fighting until the end to earn respect as one of the city’s sports greats.

“He just represents what Philadelphia is all about,” Frazier Jr. said. “Work hard. It’s not all about talking with your mouth. It’s speaking with your action. That’s what it’s about.”

Emails: FBI was looking for gold at Pennsylvania dig site