Shown is a sign outside a Rite-Aid pharmacy in Steelton, Pa., that is administering COVID-19 vaccinations, Friday, March 5, 2021.

Governor Tom Wolf: ‘Light at the end of the tunnel’ in virus fight

"At this point, though, we have something we didn't have a year ago and that is hope."

(Harrisburg) —One year after the pandemic hit Pennsylvania, Gov. Tom Wolf on Friday acknowledged the severe toll that COVID-19 has taken on his state but said that he sees “light at the end of the tunnel” with the growing availability of vaccines.

“I’m not sure there isn’t anybody in Pennsylvania who isn’t frustrated, sad, maybe even grieving for a loved one who has been lost,” Wolf said Friday at a news conference outside a Rite Aid pharmacy in Steelton, where people with appointments were waiting to be vaccinated.

“There’s a lot of sadness,” he said. “But at this point, though, we have something we didn’t have a year ago and that is hope. There is a light at the end of the tunnel.” 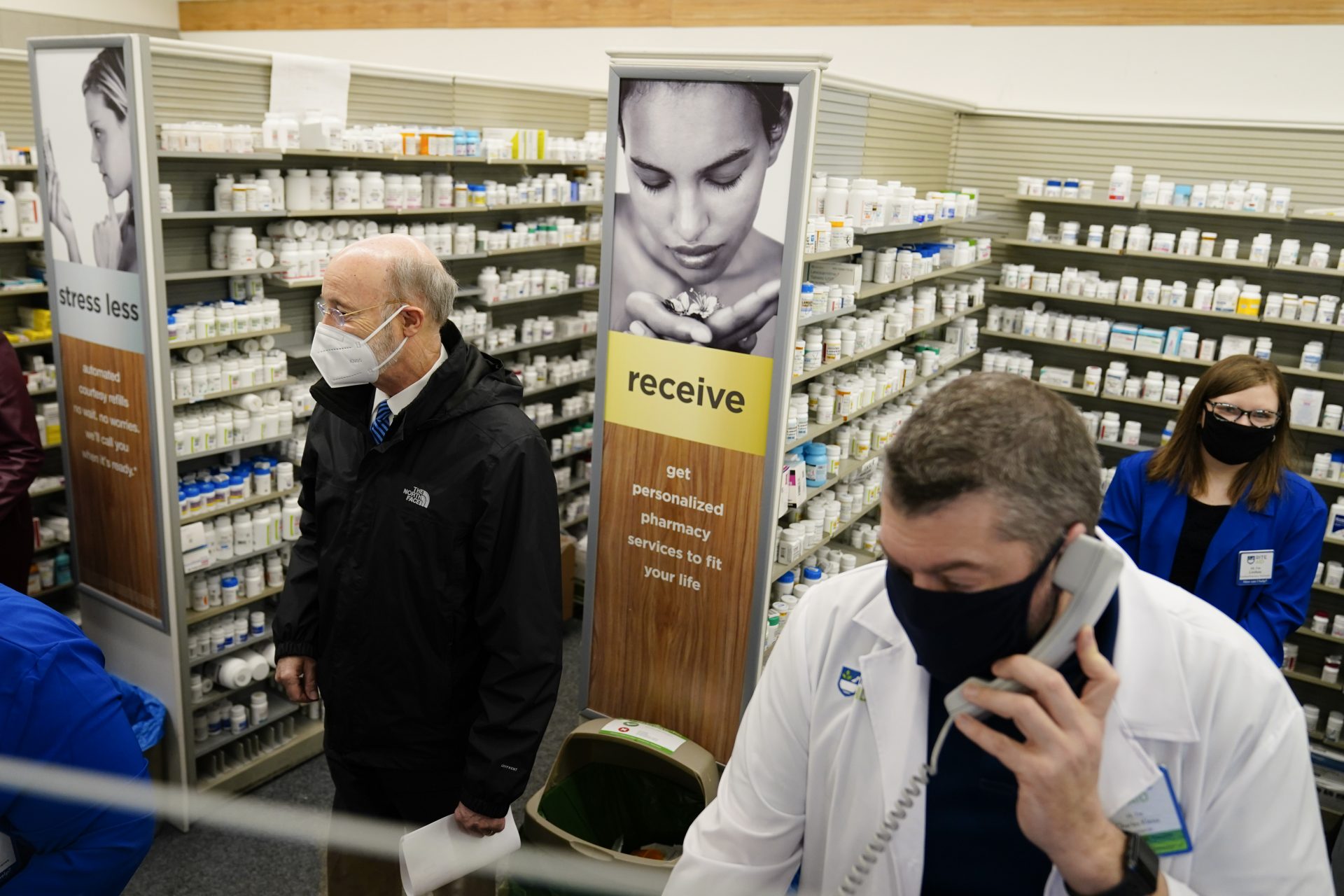 Cases, hospitalizations and deaths have been trending down for weeks after a January peak. More than 868,000 people have been fully vaccinated in Pennsylvania, according to the state Department of Health, and Wolf asserts the state’s vaccine rollout is showing signs of improvement after early stumbles.

Inside the Rite Aid, Robert Morris took his 83-year-old-old mother, Darlene Morris, to get her first shot. Morris had spent weeks looking for appointments for his mother and three other older family members before finding availability at the drugstore.

“We’ve been trying to keep her as safe as possible throughout this whole thing, and I know she gets antsy because she can’t go anywhere,” Morris said.

Now, he said, “she’s raring to go. It should hopefully make things easier for everybody. Less stress.”

Few could’ve imagine what the virus had in store for Pennsylvania after those first cases a year ago. Within weeks, Wolf had shuttered school buildings, closed thousands of businesses and ordered millions of people to stay at home — steps he said were necessary to contain the spread of COVID-19.

The virus still swept through with frightening speed and deadly effect. It took an especially dreadful toll on the state’s nursing homes, killing more than 12,600 residents.

COVID-19, and the state’s efforts to combat it, also did severe economic damage. Unemployment temporarily spiked, companies went out of business and the state’s unemployment compensation system struggled to keep up with a record-shattering number of new claims.

Republican lawmakers, some business owners and others pushed back against Wolf’s pandemic restrictions, but courts upheld his emergency authority.

Now, with cases on the decline, the Democratic governor has eased up. This week, Wolf said bigger crowds would be allowed at indoor and outdoor events. He also did away with a quarantine requirement for out-of-state travelers. 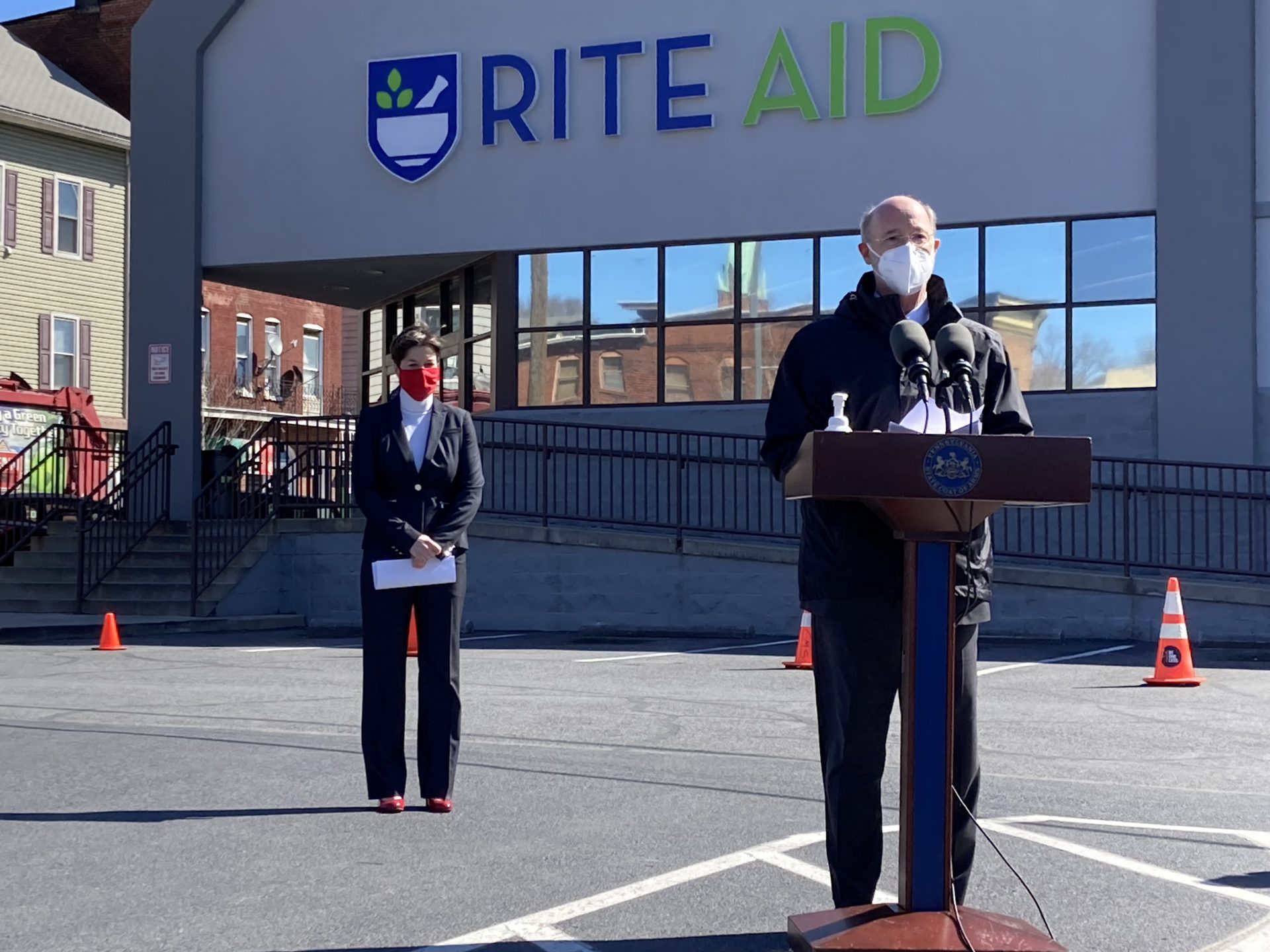 Gov. Tom Wolf speaks outside Rite Aid in Steelton one year after first cases of COVID-19 were confirmed in Pa.

Masks are still required in public, and restaurants and bars continue to labor under strict occupancy limits, including a ban on bar seating and an 11 p.m. lid on alcohol sales. Industry officials say the Wolf administration has told them not to expect relief before April, at least, amid concerns over a possible spring resurgence.

While there is cause for optimism, outbreaks are still happening. About 350 inmates at the Camp Hill state prison were found to be infected in recent days after some 1,600 were tested, the Department of Corrections said. Most were asymptomatic.

That prompted the Pennsylvania State Corrections Officers Association to renew its call to vaccinate guards who are working in what union officials called “super-spreader prisons.” Other unions, including those representing grocery store workers and state police troopers, are also pressing for their members to be prioritized for the shots.

Earlier this week, the Wolf administration announced that it would give Pennsylvania’s initial allotment of 120,000 doses of the newly approved, one-shot Johnson & Johnson vaccine to teachers, other school staff and child care workers.

The move to prioritize teachers reflected a bipartisan desire to get students back to the classroom — in some cases, for the first time in nearly a year.