Teachers gather outside Samuel Gompers School in Philadelphia on Feb. 8, 2021, to protest the district's plan to reopen classrooms for 9,000 pre-K to second grade students.

State officials expect a first shipment of 94,000 doses of the Johnson & Johnson vaccine to arrive this week.

(Harrisburg) — With growing emphasis on getting students back in schools during the pandemic, teachers and school staff will receive the first doses delivered to Pennsylvania of the newly approved one-shot Johnson & Johnson vaccine, under Gov. Tom Wolf’s plan released Wednesday.

State officials expect a first shipment of 94,000 doses of the Johnson & Johnson vaccine to arrive this week as school districts face pressure to bring students back to classrooms. Vaccination at more than two dozen sites around Pennsylvania could begin as early as next Wednesday, the governor’s office said.

Giving the vaccine to teachers and other school staff “will help protect our communities, it’s going to take burdens off our parents and families, it’s going to make our schools get back to the business of teaching our kids,” Wolf said at a news conference.

The vaccines, combined with updated state guidelines to school districts issued Wednesday, step up efforts by Wolf’s administration to get districts to expand in-person instruction.

For instance, the new guidelines now recommend only a blended learning model — both in-person and remote — but not remote learning for elementary grades in counties where the virus’ rate of spread is highest.

Wolf’s announcement comes a day after President Joe Biden said the U.S. should have enough coronavirus vaccine for all adults by the end of May and that states should make it a priority to vaccinate teachers to hasten school reopenings. 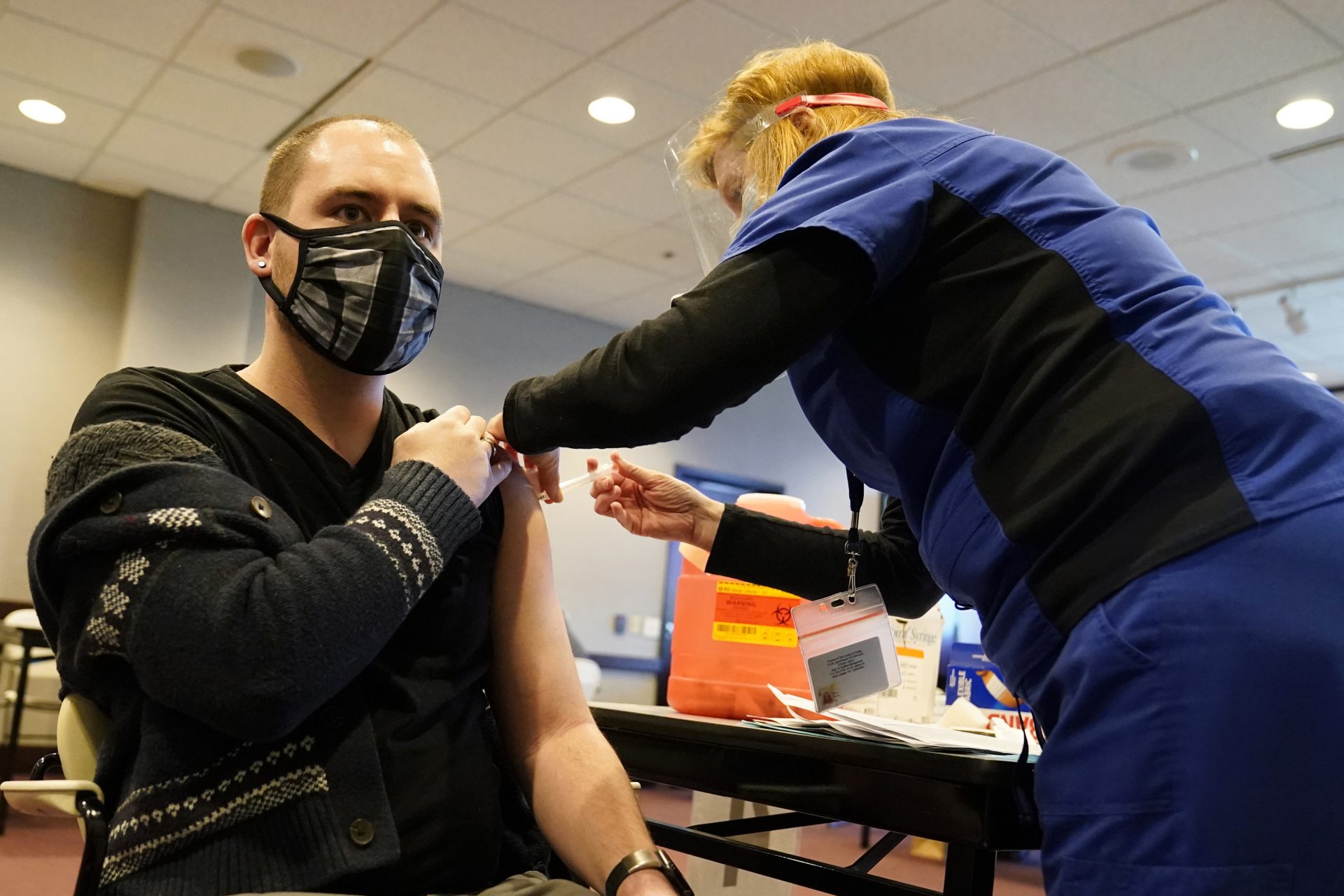 In Pennsylvania, the goal is to offer a shot to every public and private school employee, including teachers, bus drivers and administrators, with an initial focus on early-childhood and elementary-school staff, Wolf said.

Taking the vaccine is supposed to be voluntary, but there is a clear expectation that vaccinated school employees go back to school buildings promptly.

“I think what we’re saying is, ‘If you’ve been offered the vaccine, you really ought to come back to school and be willing to work in the classroom,’” Wolf said.

With more doses of the Johnson & Johnson vaccine due to states at the end of March, Wolf said the bulk of educators should be able to go back to work by the end of the month.

Education groups have asked Wolf to prioritize school staff for the COVID-19 vaccine, calling it an “absolutely essential” step toward reopening schools and keeping them open.

The state is still in Phase 1A of its vaccine plan, offering the two-dose Moderna and Pfizer vaccines to health care workers, people 65 and over and younger people with high-risk medical conditions — a population estimated at around 4 million. Many have not even received a first shot, with criticism of its rollout as haphazard and confusing.

Teachers currently are grouped in Phase 1B, along with child care workers, police, firefighters, grocery store workers and others considered to be essential workers.

Rich Askey, president of the Pennsylvania State Education Association, the state’s largest school employees union, said he believes a lot of the union’s 150,000 active members will feel comfortable getting the vaccine and safely returning to the classroom.

State data shows about 121,000 public school and charter school teachers, plus another 100,000 full- and part-time support staff, as of last year. 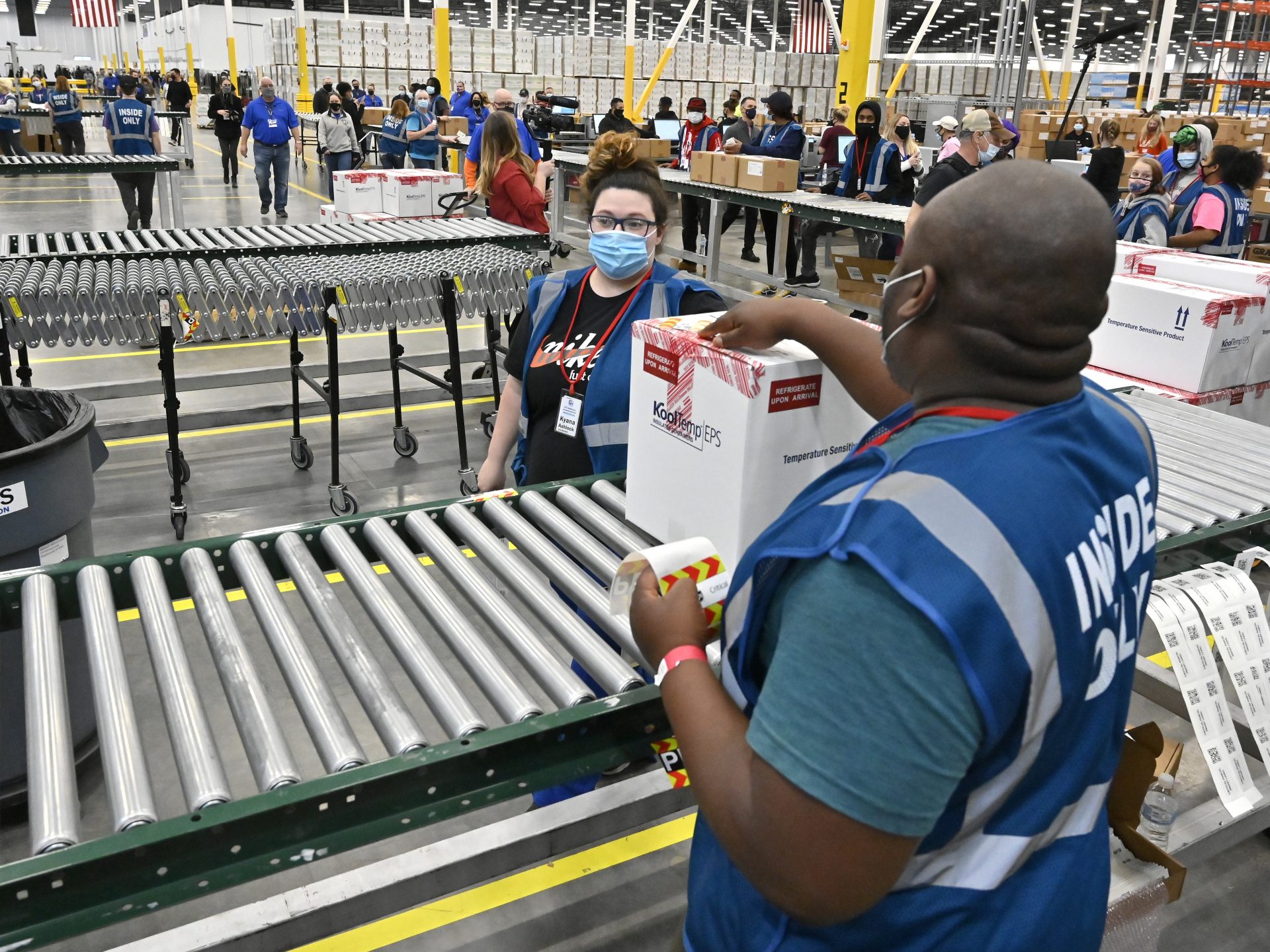 The first box of the Johnson & Johnson COVID vaccine departs from the McKesson facility in Shepherdsville, Kentucky on Monday. The company is set to distribute its first 3.9 million doses across the country this week.

Wolf said his administration’s rough estimate is that 200,000 doses will be needed to cover all school employees, considering that some may already be vaccinated or refuse the vaccine.

In Philadelphia, which gets vaccine shipments directly from the federal government, city officials expect to receive 13,000 doses of the Johnson & Johnson vaccine this week, with no additional doses for at least three weeks after.

The city plans to give the one-shot vaccine to providers that can administer them to people who are hard to reach or have a hard time returning for a second dose, such as the homebound or homeless.

To deploy the vaccine, state agencies are working through Pennsylvania’s 28 regional intermediate units to set up vaccine sites, the governor’s office said.

Each intermediate unit region will have at least one vaccination location, with most starting between next Wednesday, March 10, and March 13, it said.

Wolf’s administration, meanwhile, said it is working to make 30,000 doses of the Johnson & Johnson vaccine allocated separately to a federal pharmacy partnership with Rite Aid, Topco and Walmart available to early childhood education workers, including those at child care centers, who are not affiliated with an intermediate unit.

Essential workers are 55% more likely to get COVID-19, study of Philly-area residents finds