When the school district in Pima, Ariz., got its first round of federal pandemic relief last summer, Superintendent Sean Rickert put it toward the expenses incurred while suddenly shifting classes online at the start of the pandemic.

Now, as some Republicans in Congress question why COVID-19 aid for schools has not yet been spent, Rickert is just learning how much his district will get from a second relief bill approved in December.

“I have a list of things of things that we need in order to be able to provide better social distancing, more safety for teachers, more safety for students,” Rickert said. “I’ve been talking to my admin team all year about these things.”

Pima Unified School District, serving about 1,000 students in K-12, has been open nearly full time since the fall and Rickert says they’ve been “blessed” not to have any serious outbreaks, but the setup isn’t perfect.

“What we’ve been able to do with the money we have is a lot of tables,” Rickert explained. “So we have a lot of kids sitting across a table from each other, which isn’t terribly safe.”

His message to critics who point to unspent funds and say schools don’t need more: It isn’t a light switch. The money doesn’t get approved one day and spent the next.

One of the biggest flashpoints in the debate over President Biden’s $1.9 trillion coronavirus relief package is whether it’s too generous. It’s the third round of relief, and Republicans have questioned why all of it is needed, given that not all of the earlier relief funds have been spent.

A widely cited Congressional Budget Office estimate says “most of those funds remain to be spent.” But school leaders say the money is spoken for and they need more.

So, why does it look like there are piles of cash sitting around? Education officials from the local level all the way up to the U.S. Department of Education say it comes down to the quirks of public education finance. States reimburse school districts for qualified expenses, districts draw down funds over the course of the school year, and all of it takes time to get reported back into the federal tracking system.

The two rounds of funding for K-12 schools passed by Congress last year add up to nearly $68 billion. The deadline to fully spend funds approved last spring is Fall 2022. Funds approved in December don’t have to be obligated until Fall 2023. 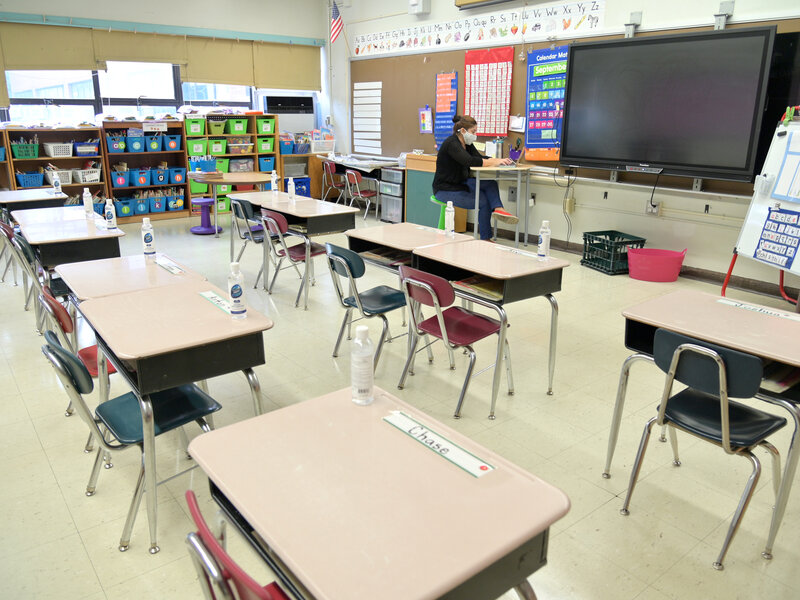 In eastern Pennsylvania, Palisades School District Superintendent Bridget O’Connell had to hire extra teachers to reduce class sizes and invest in technology to offer online classes. “It is a staff-intensive endeavor to educate kids in the pandemic,” O’Connell said in an interview with NPR.

Staff aren’t paid all at once, which means the funds aren’t spent all at once either.

School districts are also looking at hiring tutors and instructors for summer school, and planning ahead for fall, when they face the prospect of trying to help students catch up after a year where some were in school and some were at home. There’s a lot of damage to repair, said Matthew Blomstedt, education commissioner for the state of Nebraska.

“You are going to need additional adults in the system,” said Blomstedt, the president of the Council of Chief State School Officers, who has been talking with other school leaders around the country.

Those needs will be ongoing, which is an argument the White House has begun making as it tries to explain why Congress should give another $130 billion to K-12 schools, to be spent over coming years.

“The challenge here is: How do they plan ahead?” said White House Press Secretary Jen Psaki.

The question of unspent funds also hangs over the debate regarding $350 billion in additional support for state and local governments.

“Congress already appropriated $150 billion in the CARES Act for state and local governments, and not all this money’s been spent,” said James Comer, a Republican congressman from Kentucky, at a recent hearing about the relief.

The implication is that the money isn’t really needed. That’s the assessment of Arkansas Gov. Asa Hutchinson, a Republican who was part of a bipartisan group that met with Biden earlier this month.

“That’s too high,” Hutchinson said of the $350 request for state and local governments. “Needs to be lower. Needs to be compromise reached so we can bring bipartisan support.”

Hutchinson, vice chair of the National Governors Association, said his state has already patched its pandemic budget gap, its economy is booming and Arkansas doesn’t need the additional help that Biden’s rescue plan would offer.

But other governors and the mayors at the meeting had a very different assessment of the need, reflecting the uneven impacts of the pandemic and accompanying recession.

An analysis by J.P. Morgan found that nationwide, state government revenues fell only slightly — 0.12% — in 2020 compared to the year before the pandemic.

“On average, state revenue has mostly recovered. And the key reason for that is that income has mostly recovered,” said Marc Goldwein of the Committee for a Responsible Federal Budget. “The economy is doing much better right now than we thought it was going to be doing early in the pandemic.”

That’s especially true for upper-income workers, who pay the lion’s share of state taxes and who have generally managed to keep working during the pandemic, said Goldwein. But there is a lot of variation around the country. States that are heavily dependent on tourism or oil drilling suffered a much bigger blow to their budgets.

“States like Nevada and Hawaii and Alaska and Texas are not doing very well,” said Goldwein. “States like California have a $25 billion surplus. Idaho has had the fastest revenue growth it’s seen in years. So there really are big differences between the states.”

Idaho’s tax revenues jumped almost 11% last year, according to the J.P. Morgan analysis. Vermont’s rose nearly 13%. But if state coffers fared better on balance than many people expected early in the pandemic, backers of the president’s plan say that’s not the whole story.

“Even though the situation has improved, there are still revenue shortfalls and major new costs,” said Michael Leachman of the Center on Budget and Policy Priorities.

City and state governments have already cut 1.3 million jobs since the pandemic started. Leachman says that’s nearly twice as many government jobs as were lost in the last recession.

“After the last recession, we made a big mistake. The federal government provided some aid to states and localities but it was far too little and it ended much too soon,” said Leachman. “And the effect of that was to really slow the economy’s recovery. We’d be much better off to make sure that we’re not making the same mistake again.”

In many cases, the problem isn’t so much revenue as it is expenses brought on by the pandemic. And local governments are bearing the brunt of that, spending more to help residents who are struggling with the economic downturn with food and vaccines.

“We’re not like the federal government. We have to balance the budget,” said Dayton, Ohio mayor Nan Whaley, a Democrat.

While states and cities with more than 500,000 residents got direct assistance in the CARES Act passed last spring, most cities and towns, including Dayton had to wait for it to trickle down through their states and counties. The deadline to spend it isn’t until the end of this year, so some are trying to make it last as they manage strapped budgets.

For months now, Whaley has been part of a bipartisan group of mayors pushing for more help. In December, when Congress approved additional aid, state and local governments were left out.

Dayton’s budget has been slammed by the pandemic, so much so that Whaley isn’t sure they will be able to train police officers or firefighters needed to replace front line workers who retire. They are recruiting for classes that would start in April, but if federal funding doesn’t come through on time, there will be fewer people on the beat.

In Arlington, Texas, providing support for local vaccination efforts is costing the city $400,000 a week and Mayor Jeff Williams, a Republican, says he is preparing for a likely drop in property taxes.

“Appraisals are going on right now and many of our commercial businesses, the values have really gone down,” said Williams. “So we’re bracing for another 10% hit. And then: we don’t know.”

'We were counting on plans that never materialized:' PennDOT details funding problems and possible fixes