Embalmer and funeral director Kristy Oliver (left) and funeral attendant Sam Deras load the casket of a person who died after contracting COVID-19 into a hearse in El Cajon, Calif. People who work in hospitals and in funeral homes are witnesses to the loss that many Americans can avoid.

There are signs that we may be beating back the virus. But a brighter future won't bring back precious lives lost.

This week President Biden is asking Americans to mark the 500,000 deaths with a moment of silence at sunset Monday. He’s also ordered flags on all federal buildings lowered to half-staff for five days.

The disease has killed at least 100,000 people in the past five weeks and was the leading cause of death in the country in January, ahead of heart disease, cancer and other ailments, according to an analysis by the Kaiser Family Foundation.

Losing half a million lives to this disease was unimaginable when the first few people died of COVID-19 in the U.S last February. The disease soon began to ravage nursing homes and the five boroughs of New York City, frequently striking those left most vulnerable because of age, poor health, job requirements or crowded living conditions.

Now, around 2,000 people die from the disease every day on average, according to data from Johns Hopkins University, down from a high of over 3,000 a day on average in mid-January.

“The massive number and the loss of those people from our society has not been acknowledged,” says Dr. Camara Phyllis Jones, an epidemiologist and past president of the American Public Health Association. “We cannot think these people are disposable and dispensable and that we can just get along very well without them. It’s those kinds of blinders that sap the strength of the whole society.” 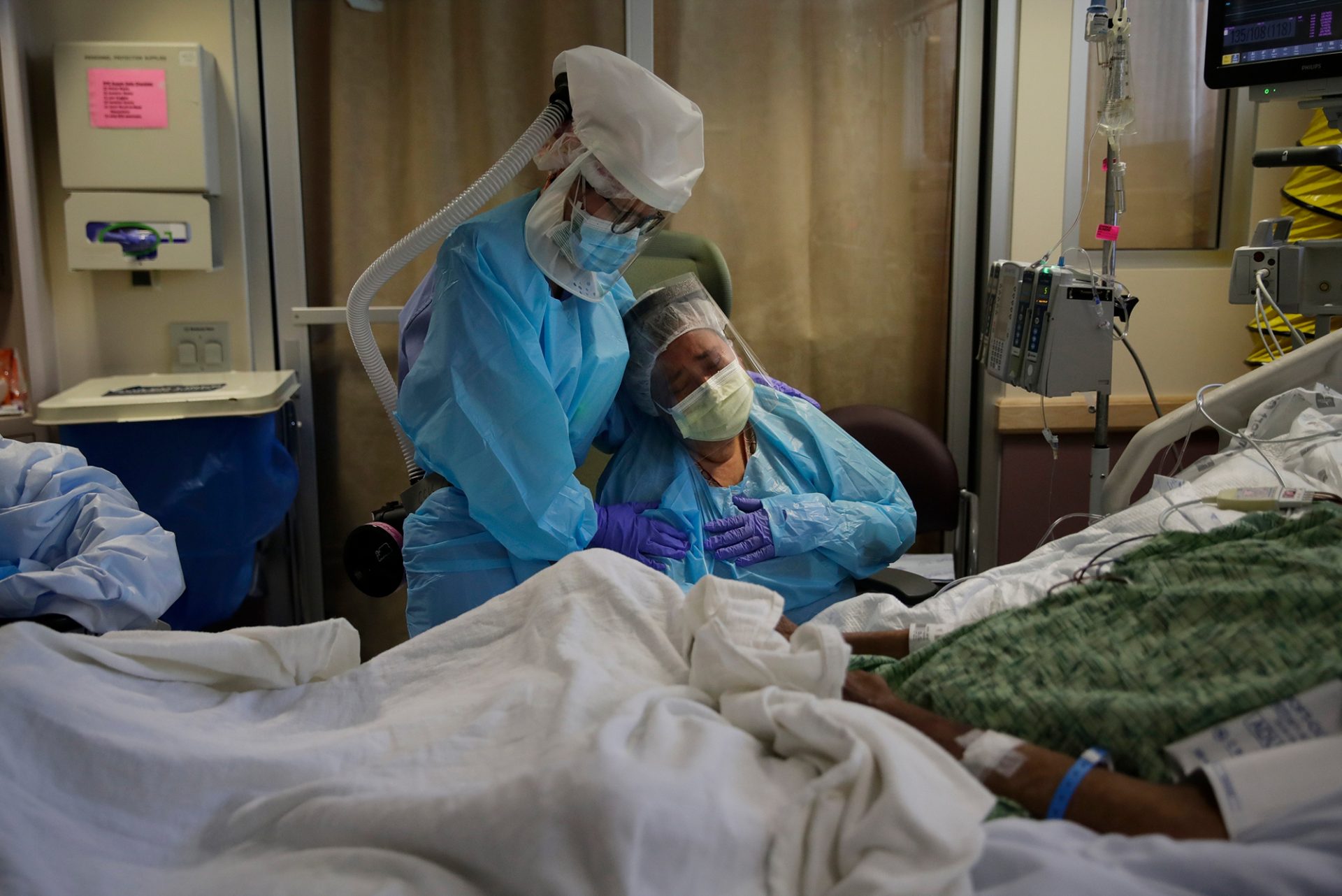 FILE PHOTO: In this July 31, 2020, file photo, Romelia Navarro, right, is comforted by nurse Michele Younkin, left, as she weeps while sitting at the bedside of her dying husband, Antonio Navarro, in St. Jude Medical Center’s COVID-19 unit in Fullerton, Calif. Antonio was Younkin’s first COVID-19 patient to pass on her watch.

How we got here

The death count in the U.S. far exceeds that of other countries — a fact that health experts attribute to the scattered, patchwork pandemic response from the Trump administration.

“From the very beginning, we had the luxury of time,” says Dr. Richina Bicette, an emergency medical physician and associate medical director at the Baylor College of Medicine. “We saw what happened in China. We saw COVID ravaging through Europe. We could have prepared better. We could have hunkered down.”

She and other experts cite the shortages of personal protective equipment, testing supplies and contact tracing capacity as some of the missing pieces that could have saved lives.

“If we had put the public health measures in place for the past year, we wouldn’t be in this position,” says Jones. “We have not paid people to make it feasible for most people to safely shelter in place. We have not ensured that workplaces for those who really have to go to work are safe. We have not equipped workers who must go to work with adequate personal protective equipment.”

The politicization of public health messaging, on topics such as masking and the severity of the disease in comparison with flu, also confused and endangered the public, Bicette says. 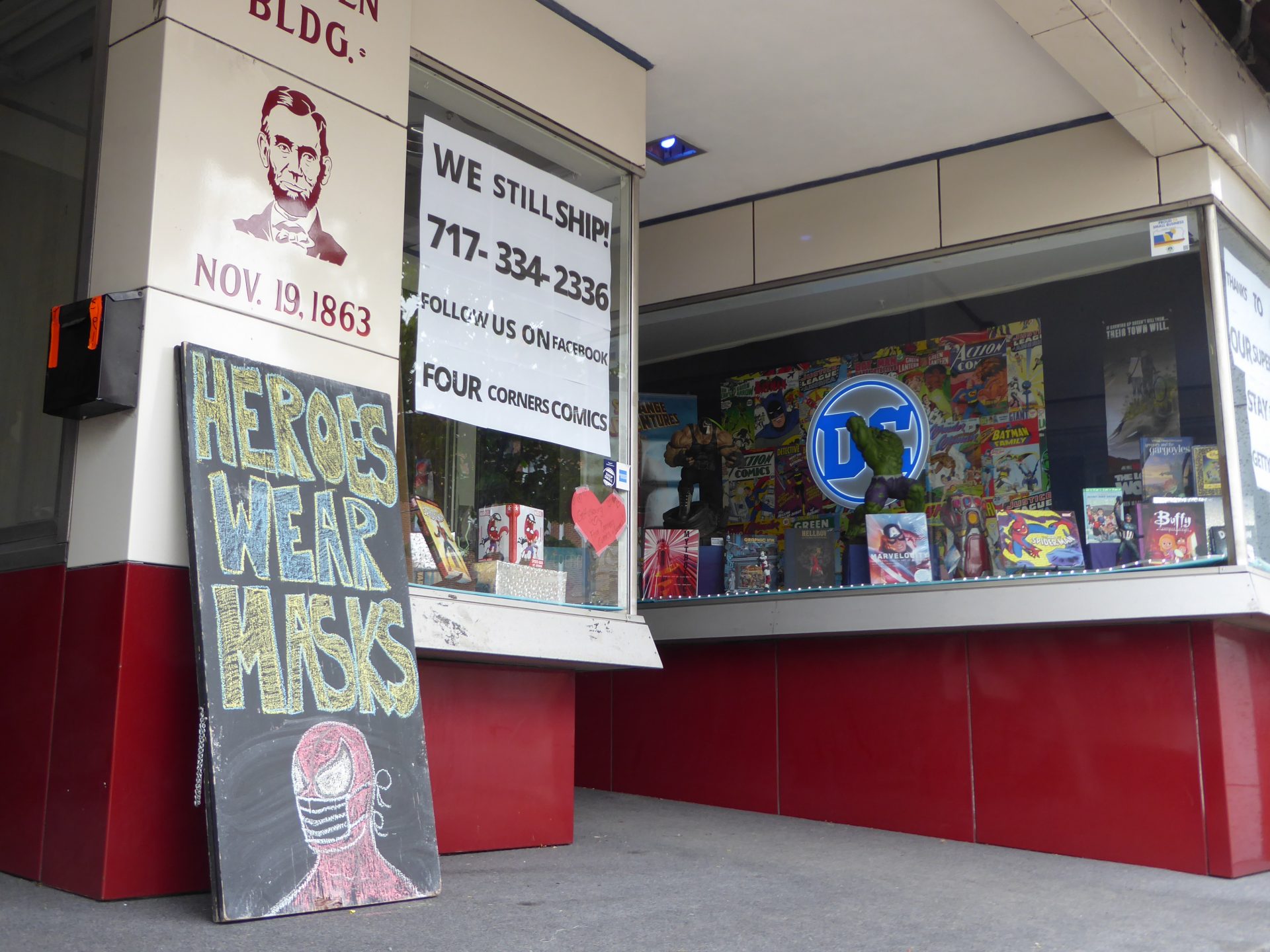 FILE PHOTO: A sign at Fourcorners Comics & Games in Gettysburg salutes those who are wearing masks in an attempt to limit the spread of coronavirus, Monday, April 20, 2020.

Perhaps the most heartbreaking fact about reaching half a million U.S. deaths, is that the toll is still rising. Though new infections and hospitalizations are slowing after a midwinter peak, the country has a long way to go to end the pandemic.

“That decline is really fragile and could change at any time,” says Ali Mokdad, professor of health metrics sciences at the Institute for Health Metrics and Evaluation.

He describes the present situation as a race between the vaccine and new, more transmissible variants, saying that even with the vaccine rollout, Americans will need to stick to safe behavior to keep the virus from surging badly again.

“We don’t want people to drop their guard and think that now is the time to throw their masks away and to start gathering, because that’s going to erase all the progress that we’ve recently made,” Bicette says. “We do still have to continue to employ the mitigation strategies that we’ve been discussing since the beginning of the pandemic because people are still dying.”

Still many experts speak with measured optimism about the future.

“I’m quite hopeful that we are starting our way down the path to normalcy,” says Jennifer Nuzzo, an epidemiologist and senior scholar at the Johns Hopkins Center for Health Security.

“[Daily deaths] are starting to tick down, and we’re now several months into vaccinating,” she says, adding that residents and staff at nursing homes, which had some of the highest death rates for COVID-19, were among the first to get vaccinated. 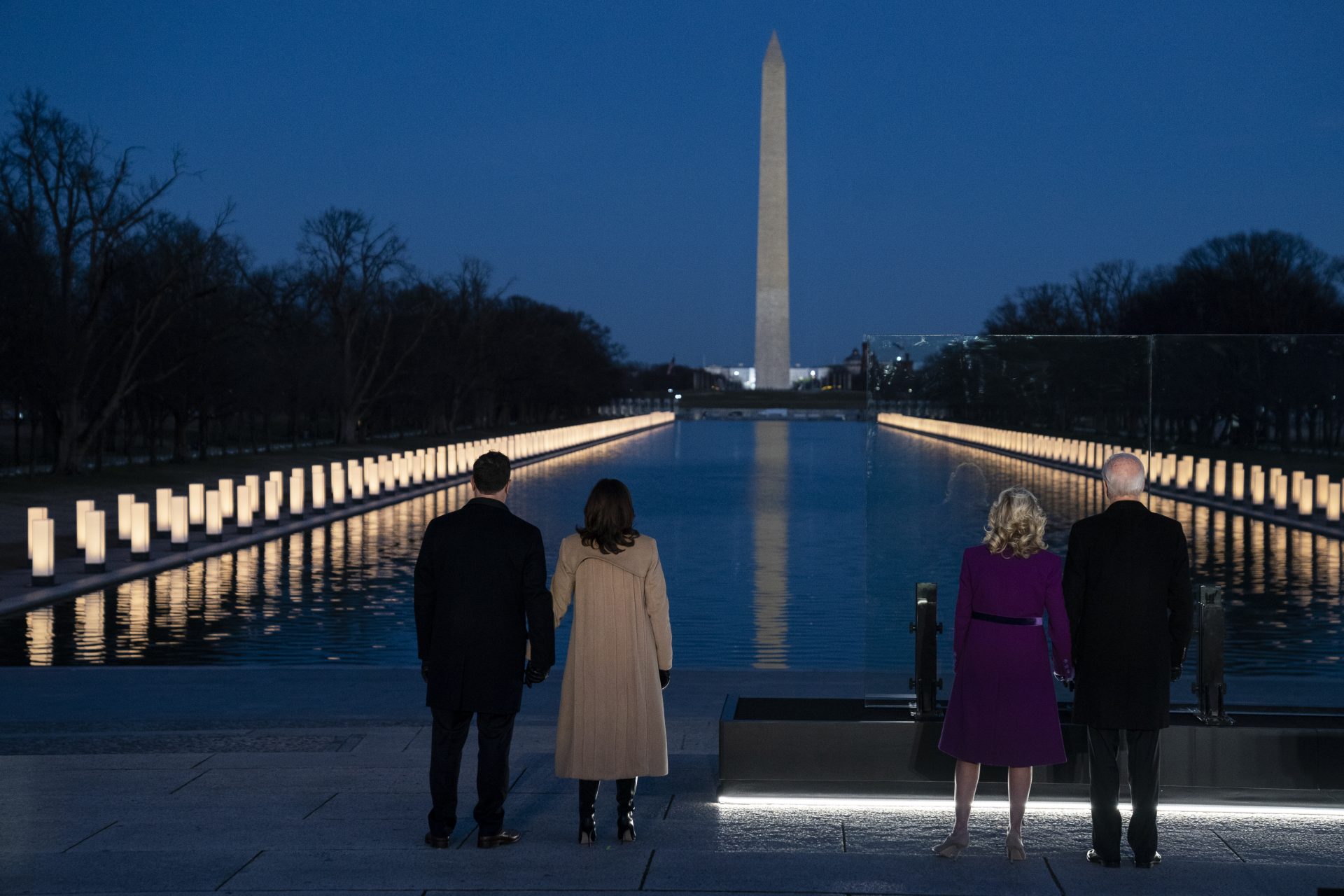 FILE PHOTO: President-elect Joe Biden and his wife Jill Biden are joined by Vice President-elect Kamala Harris and her husband Doug Emhoff to participate in a COVID-19 memorial event at the Lincoln Memorial Reflecting Pool, Tuesday, Jan. 19, 2021, in Washington.

Signs of hope ahead do not soften the tragedy of each life lost to the illness.

Lives like that of Xavier Gaines, a 26-year-old security guard with underlying conditions and without health insurance, who died in an ambulance on the way to the hospital on Dec. 2.

And Claudette White, 49, a member of the Quechuan Tribal Council who performed a traditional song to kick off a Biden-Harris inauguration welcome event last month. She died on Feb. 6, shortly after getting COVID-19, which is killing Native American, Black and Latinx people at disproportionately high rates in the U.S.

The losses include children, like Braden Wilson, 15, from Simi Valley, Calif., who was so cautious about COVID-19 that he refused to get his school picture taken. He caught coronavirus at the emergency room when he went for an unrelated issue, says his mother Amanda Wilson.

On Jan. 5, less than a week after he tested positive, he succumbed to multisystem inflammatory syndrome in children (MIS-C), a rare and dangerous complication from COVID-19 that has struck around 2,000 kids in America. “It was too fast, and too hard, and I was not ready for my boy to be gone,” says Wilson, “He had too much life ahead.”

And then there was Regina Angeles Yumang, a 62-year-old ICU nurse in New York and her husband, Dennis Yumang, who each died from the disease a month apart, leaving behind a college-age son. Regina is one of more than 3,400 health care workers in the U.S. who have died from COVID-19, according to numbers from The Guardian and KHN.

Lorraine Enger, 93, died on Jan. 6 at her assisted-living facility in Michigan, four days after testing positive for COVID-19 — and two days before vaccinations started there. “[The facility] had managed for 10 months to keep [the coronavirus] out,” says her daughter Julie Enger. “The hard part that every family member goes through when they’re faced with this is that their loved one was alone.”

It’s hard to fathom hundreds of thousands of lives in the U.S., and some 2 million more around the world, cut short by the pandemic.

“We as a nation have not coped with this. It’s almost as if these are individual losses to individual families, but that they are not seen as a loss to the whole society,” says Jones.

She notes that the COVID-19 memorial tribute last month, on the eve of President Biden’s inauguration, in which lights were placed around the Lincoln Memorial reflecting pool, was the first formal acknowledgement of the pandemic’s death toll in the U.S. by the executive branch of the federal government.

For most of the past year the burden of processing the grief has fallen on health care and funeral home workers.

Cheri Bentley, a hospice nurse with Bluegrass Care Navigators in Kentucky, has witnessed nine of the 500,000 deaths. “The hardest part is watching loved ones who want to be with a patient, and patients who want to be with their families — and cannot be [due to COVID-19 restrictions],” she says. Bentley says the nonverbal parts of saying end-of-life goodbyes — holding the hand of a loved one, stroking their face or sitting beside them for hours — are lost.

Her work helping families say goodbye remotely has raised her own risk of COVID-19 exposure. Yet, in these cases, “I do it anyway,” she says, describing video calls between patients and their families: “I’m inches from their face, and they’re coughing and they can’t breathe and they’re struggling. And I’m trying to convey what the patient is saying to the family.”

The toll of witnessing these deaths has largely fallen on frontline health care workers.