The decision to exclude Pennsylvania State Police comes after a year dominated by police brutality protests and a harder look within law enforcement agencies across the country at how they interact with Black and brown communities.

The decision comes after a year dominated by police brutality protests, and amid concerns about illegal vehicle searches and alleged racial profiling of Latinos by troopers.

(Harrisburg) —  One of the nation’s largest statewide police forces, the Pennsylvania State Police, will not be subject to annual budget hearings, shielding the department from lawmakers who have used the forum in the past to question officials and hold them accountable.

The decision to exclude the department comes after a year dominated by police brutality protests and a harder look within law enforcement agencies across the country at how they interact with Black and brown communities.

The State Police only recently resumed collecting racial data on traffic stops after Spotlight PA revealed it had abandoned the practice, and the department is being sued for allegedly profiling Latino drivers. A separate investigation found troopers looking for drugs along one of the state’s major highway corridors often used minor traffic stops and shoddy affidavits to search drivers illegally. The Office of the Inspector General is now reviewing the legality of the stops.

And with a $1.4 billion budget, the agency is also facing chronic funding issues exacerbated in recent years by the dissolution of small, municipal departments.

“To not have them come before us during this critical time in our country and state is a missed opportunity,” said state Rep. Donna Bullock (D., Philadelphia), who sits on the House Appropriations Committee and is chair of the Pennsylvania Legislative Black Caucus.

Spokespersons for the House and Senate Appropriations committees said the decision wasn’t political, but rather an effort to whittle down a marathon of hearings for the state’s dozens of departments from a month to three weeks long. 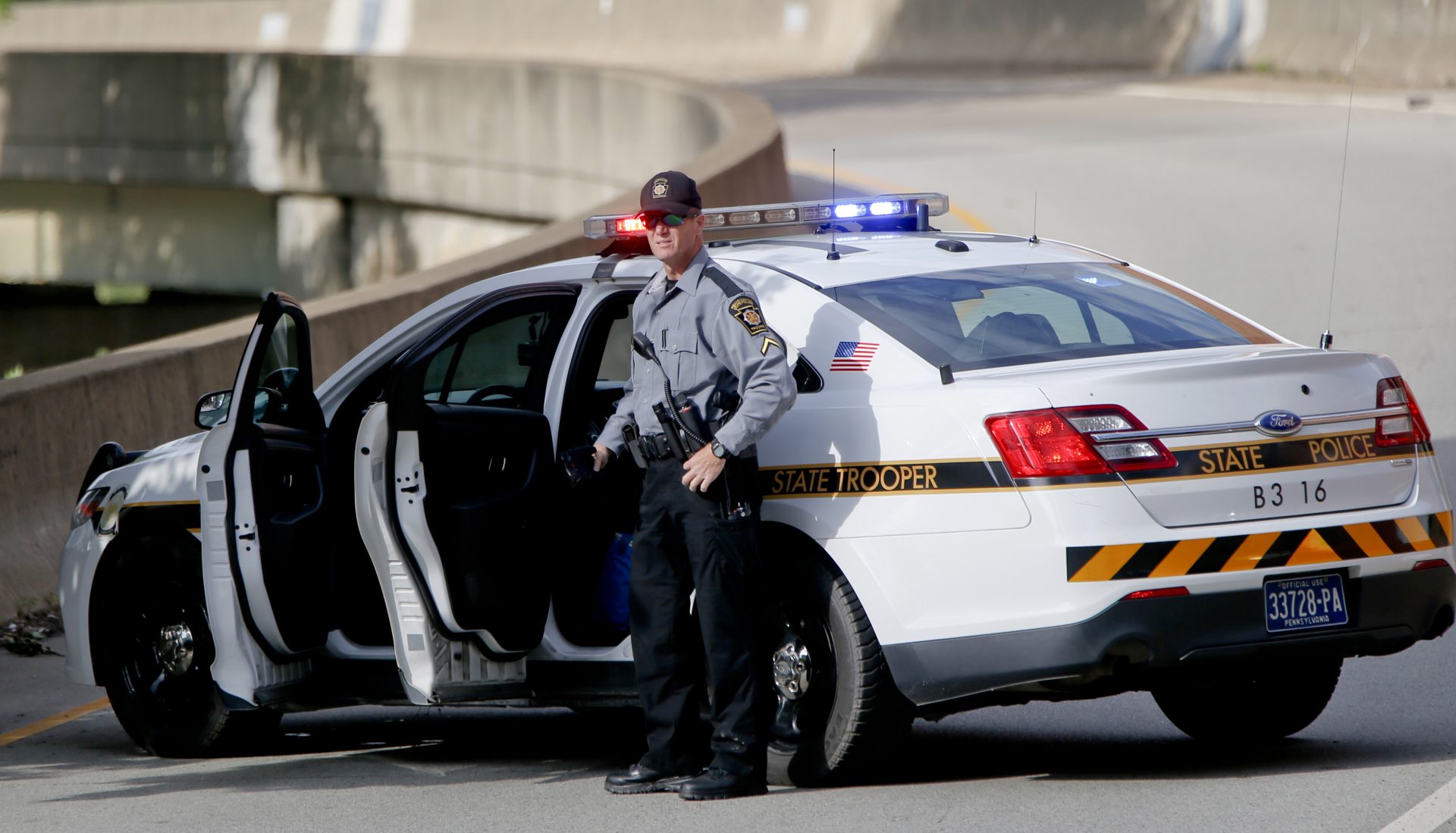 FILE PHOTO: A Pennsylvania State Trooper stands beside his vehicle parked on the entrance ramp to Interstate 376 out of Pittsburgh as protesters block an intersection in downtown Pittsburgh, on Tuesday, June 26, 2018.

The Pennsylvania Emergency Management Agency, for example, had a budget hearing last year, but did not go in front of lawmakers in 2019 and will not do so this year.

“We’re not the only committee in town,” said Neal Lesher, spokesperson for the House Appropriations Committee. He conceded that lawmakers use the hearings to raise issues unrelated to a department’s finances, but “we are focused on [this year’s] budget.”

Lesher added that the State Police budget is “straightforward.”

“There’s nothing really new in there,” he said. “I think as we were looking at which agencies where there is nothing new that would take a two-hour hearing, there wasn’t a need.”

But the budget is far from uncomplicated.

State Police heavily rely on the Motor License Fund to cover costs and salaries. But in 2017, the legislature capped how much money lawmakers can take from the fund — meant to repair roads and highways — putting increased pressure on them to come up with a dedicated revenue stream.

Once again, Gov. Tom Wolf is proposing to charge a fee for State Police coverage in municipalities without their own force to raise an estimated $168 million. But Republicans, as they have in the past, are expected to reject that proposal, arguing it shifts the burden to taxpayers.

“There are police reform bills that went out last year,” Bullock said. “I’m not clear on what investments they made to implement the bills we passed.”