In this image from video, House impeachment manager Rep. David Cicilline, D-R.I., speaks during the second impeachment trial of former President Donald Trump in the Senate at the U.S. Capitol in Washington, Tuesday, Feb. 9, 2021.

It was the most bipartisan impeachment vote in U.S. history.

(Washington) — A majority of senators voted Saturday to convict former President Donald Trump on an impeachment charge of inciting an insurrection at the U.S Capitol.

But the Democrats’ side needed 17 Republicans to join them in order to reach the two-thirds threshold needed to convict.

Seven GOP senators voted with Democrats — the most bipartisan impeachment vote in U.S. history — but well short of the 17 needed to convict the former president.

Of those seven Republicans, two are retiring and only one — Alaska’s Lisa Murkowski — faces her state’s voters in the next election cycle, 2022.

Here’s a closer look at the seven GOP senators who broke ranks with their party and some of the political calculations they face back home. 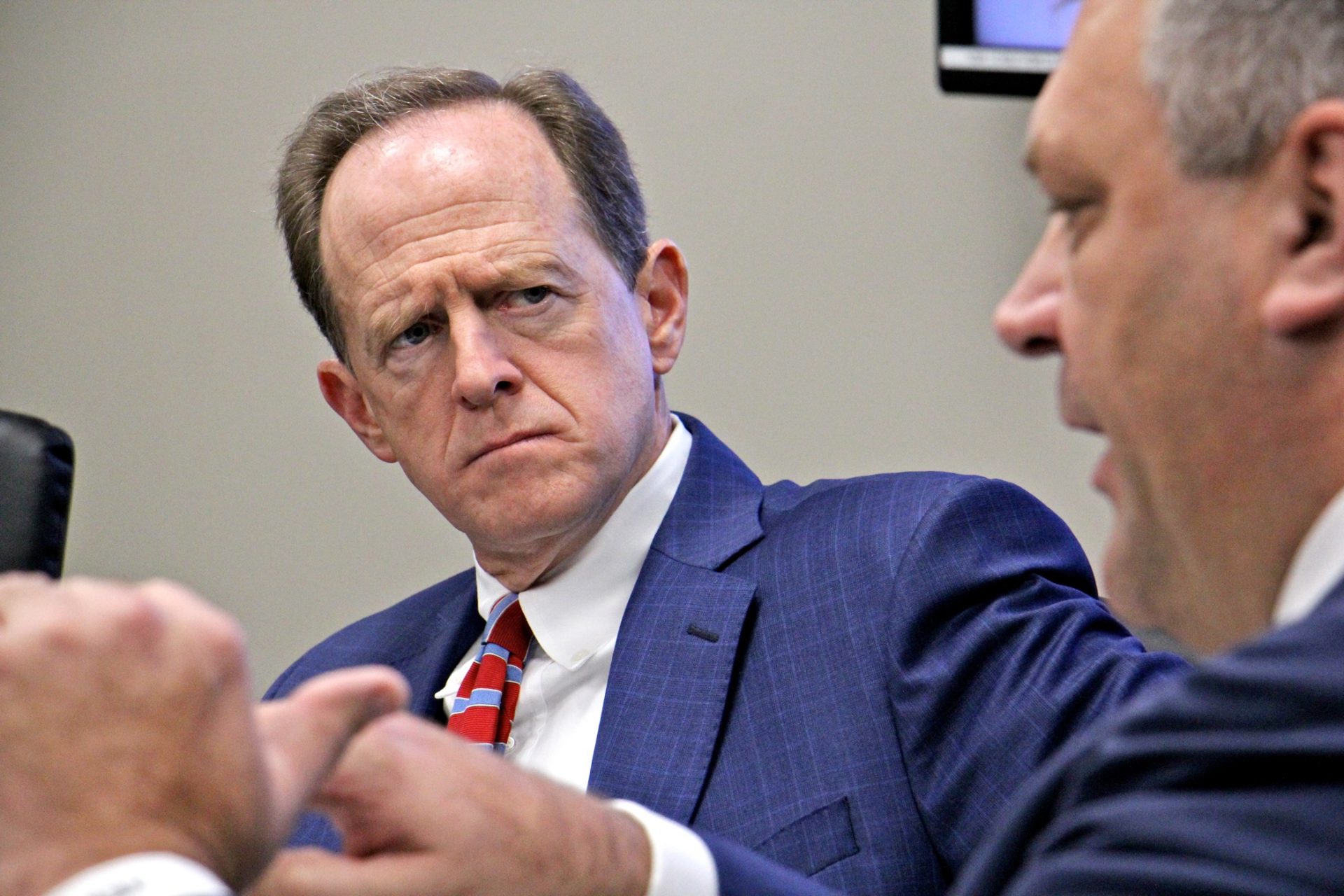 U.S. Sen. Pat Toomey listens as Monroe Energy CEO Jeff Warmann explains the hardship of complying with the RINs program which requires the use of renewable fuels like ethanol.

Vote explanation: In a statement, Toomey said he voted for Trump but the former president’s behavior after the election “betrayed the confidence millions of us placed in him.”

“As a result of President Trump’s actions, for the first time in American history, the transfer of presidential power was not peaceful,” he said. “A lawless attempt to retain power by a president was one of the founders’ greatest fears motivating the inclusion of the impeachment authorities in the U.S. Constitution.”

Political situation: Toomey — who like Maine’s Collins represents a state Trump lost in the presidential election — announced in October that he would not seek reelection in 2022.

Pennsylvania GOP Chair Lawrence Tabas told the Philadelphia Inquirer he shared the “disappointment of many of our grassroots leaders and volunteers” over Toomey’s vote. 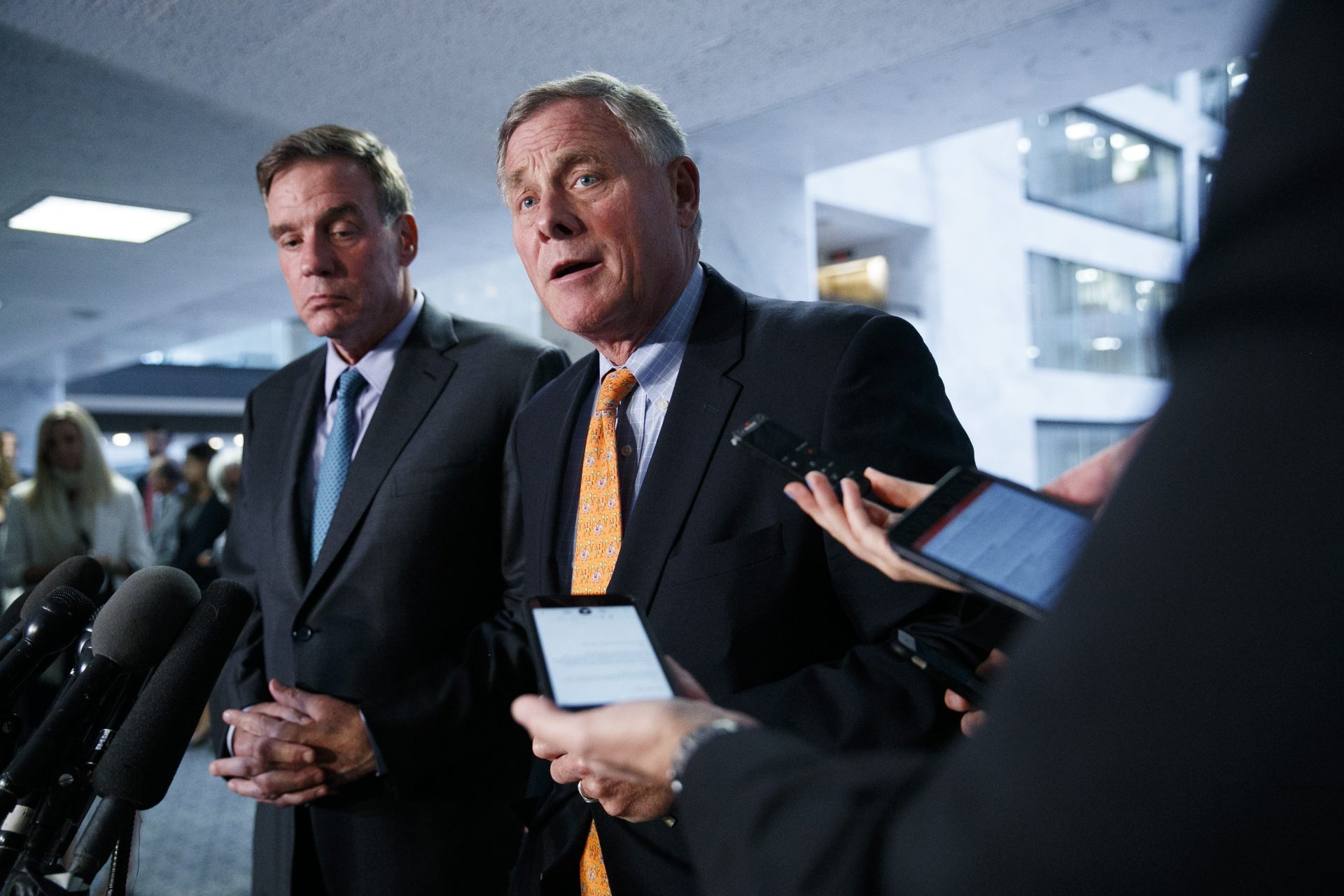 Vote explanation: Burr’s vote to convict was largely unexpected. According to Capitol Hill reporters in the chamber during the vote, there were audible “wows” and rumblings from senators when he cast his vote. He had previously voted to dismiss the trial on the basis of constitutionality.

In a statement, Burr said he did “not make this decision lightly, but I believe it is necessary.”

“When this process started, I believed that it was unconstitutional to impeach a president who was no longer in office,” he said. “I still believe that to be the case. However, the Senate is an institution based on precedent, and given that the majority in the Senate voted to proceed with this trial, the question of constitutionality is now established precedent.”

He said he listened to the arguments from both sides and the “facts are clear.”

“The evidence is compelling that President Trump is guilty of inciting an insurrection against a coequal branch of government and that the charge rises to the level of high Crimes and Misdemeanors.”

Political situation: Burr, who’s served in the Senate since 2005, announced years ago that this term would be his last.

Michael Whatley, the chairman of the North Carolina Republican Party, released a statement on Saturday blasting Burr for his vote.

“North Carolina Republicans sent Sen. Burr to the United States Senate to uphold the Constitution and his vote today to convict in a trial that he declared unconstitutional is shocking and disappointing,” he said.

Meanwhile, former Congressman Mark Walker, who is running for the retiring Burr’s seat in the 2022 election, immediately tweeted “wrong vote.”

“I am running to replace Richard Burr because North Carolina needs a true conservative champion as their next senator,” he wrote. 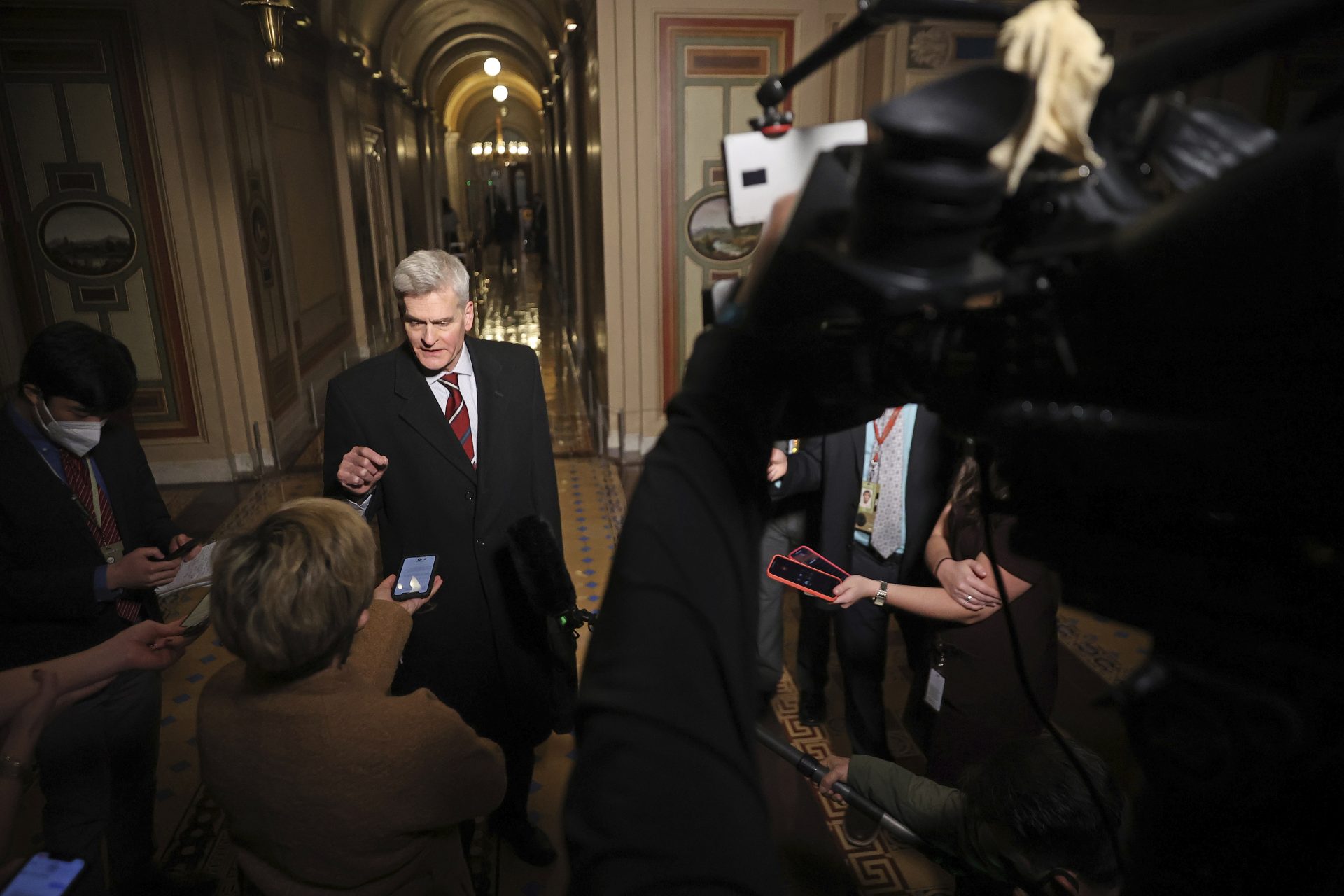 Sen. Bill Cassidy, R-La., talks with reporters as he leaves the U.S. Capitol after the first day of Trump’s second impeachment trial in the Senate, Tuesday, Feb. 9, 2021, in Washington.

Vote explanation: Cassidy posted a video to Twitter after the trial, saying: “Our Constitution and our country is more important than any one person. I voted to convict President Trump because he is guilty.”

On ABC on Sunday he added that “it was clear that [Trump] wished that lawmakers be intimidated” while they counted electoral votes, and that he didn’t act quickly to dissuade the violent mob.

Political situation: The backlash to Cassidy’s vote to convict was swift. The state GOP voted unanimously to censure him, releasing a statement saying it condemns Cassidy’s action.

“Fortunately, clearer heads prevailed and President Trump has been acquitted of the impeachment charge filed against him,” the Republican Party of Louisiana statement read.

Cassidy just won reelection a few months ago, by 40 percentage points, and won’t face voters again until 2026. Additionally, Louisiana has an open primary system, which could insulate him some from a Republican challenge. 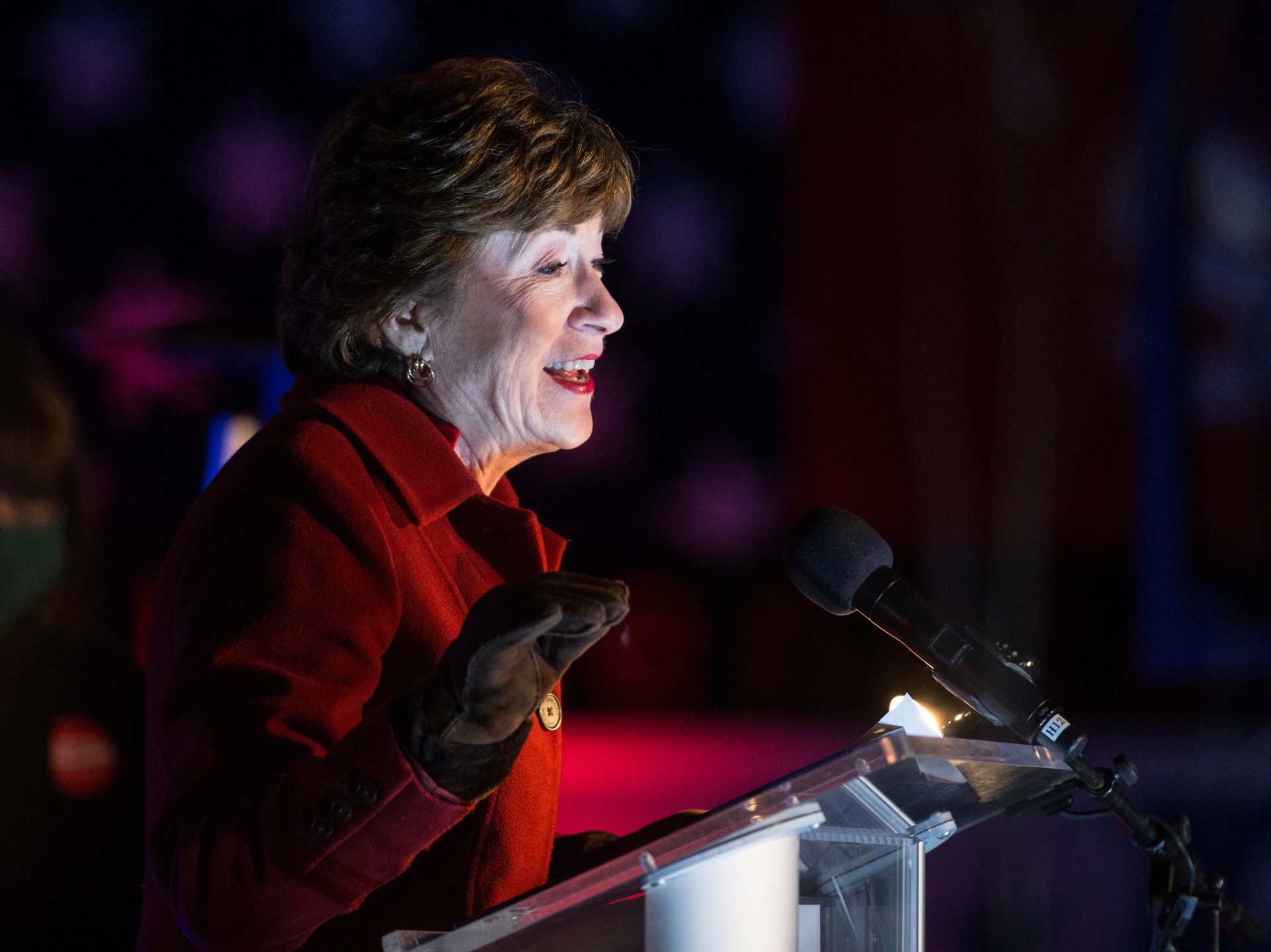 Vote explanation: After Trump was acquitted, Collins delivered a 16-minute address from the Senate floor about her decision to vote to convict.

“This impeachment trial is not about any single word uttered by President Trump on Jan. 6, 2021,” she said. “It is instead about President Trump’s failure to obey the oath he swore on January 20, 2017. His actions to interfere with the peaceful transition of power – the hallmark of our Constitution and our American democracy – were an abuse of power and constitute grounds for conviction.”

She added: “My vote in this trial stems from my own oath and duty to defend the Constitution of the United States. The abuse of power and betrayal of his oath by President Trump meet the constitutional standard of ‘high crimes and misdemeanors,’ and for those reasons I voted to convict Donald J. Trump.”

Political situation: Collins’ next election is in 2026. Like Cassidy, Collins just won reelection in 2020, though her race was much closer in a state Trump lost (he won one electoral vote in the state for winning its 2nd congressional district).

She won her fifth term after a contest in which much of her opposition cited her support of Brett Kavanaugh’s nomination to the Supreme Court and her vote to acquit Trump during his first impeachment trial.

Maine has ranked-choice voting, and many thought it could play a deciding role in her race last year, but Collins won an outright majority of Senate votes. 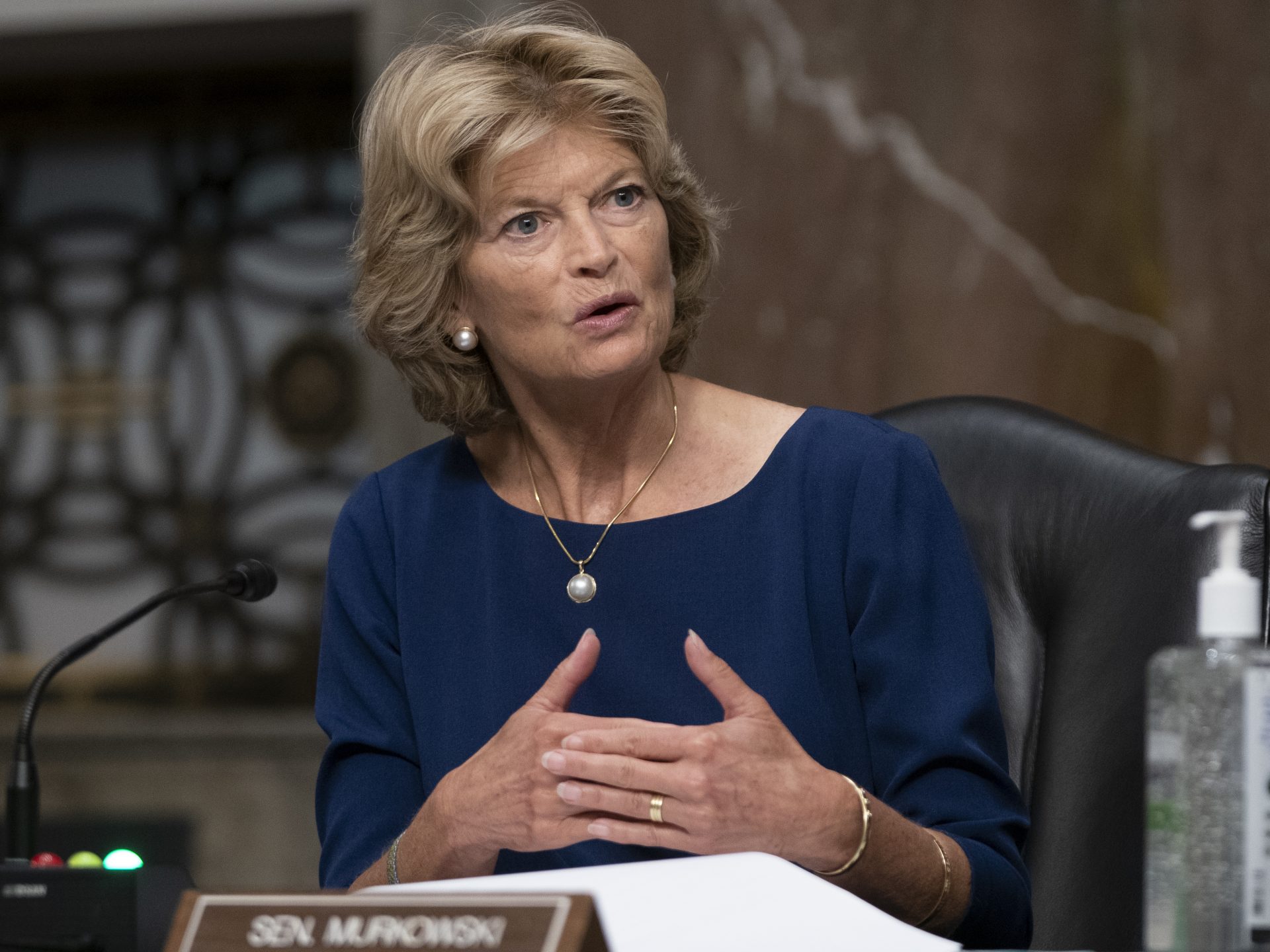 WASHINGTON, DC – SEPTEMBER 23: U.S. Sen. Lisa Murkowski (R-AK) asks a question at a hearing of the Senate Health, Education, Labor and Pensions Committee on September 23, 2020 in Washington, DC. The committee is examining the federal response to the coronavirus pandemic. (Photo by Alex Edelman-Pool/Getty Images)

Vote explanation: In a statement after the vote, Murkowski said she had upheld her oath as a senator to listen to both Trump’s defense team and impeachment managers impartially, but that the facts were clear to her that Trump was responsible for the violence at the Capitol.

“The evidence presented at the trial was clear: President Trump was watching events unfold live, just as the entire country was,” her statement reads. “Even after the violence had started, as protestors chanted ‘Hang Mike Pence’ inside the Capitol, President Trump, aware of what was happening, tweeted that the Vice President had failed the country.”

She said Trump “set the stage for months” that the presidential election was rigged and that after he lost, he “did everything in his power to stay in power.”

Political situation: Murkowski, a senator since 2002, is up for reelection next year, but as Alaska Public Media recently reported, her state’s new election rules likely mean she’ll be in less danger of losing her primary.

Alaska has an open primary and ranked-choice voting, which means all contenders for the seat will be on the same ballot for all primary voters. The top four will advance to the general election and then voters will rank them in order of preference.

Murkowski herself told Alaska Public Media that she thinks the new system puts her in a better position. 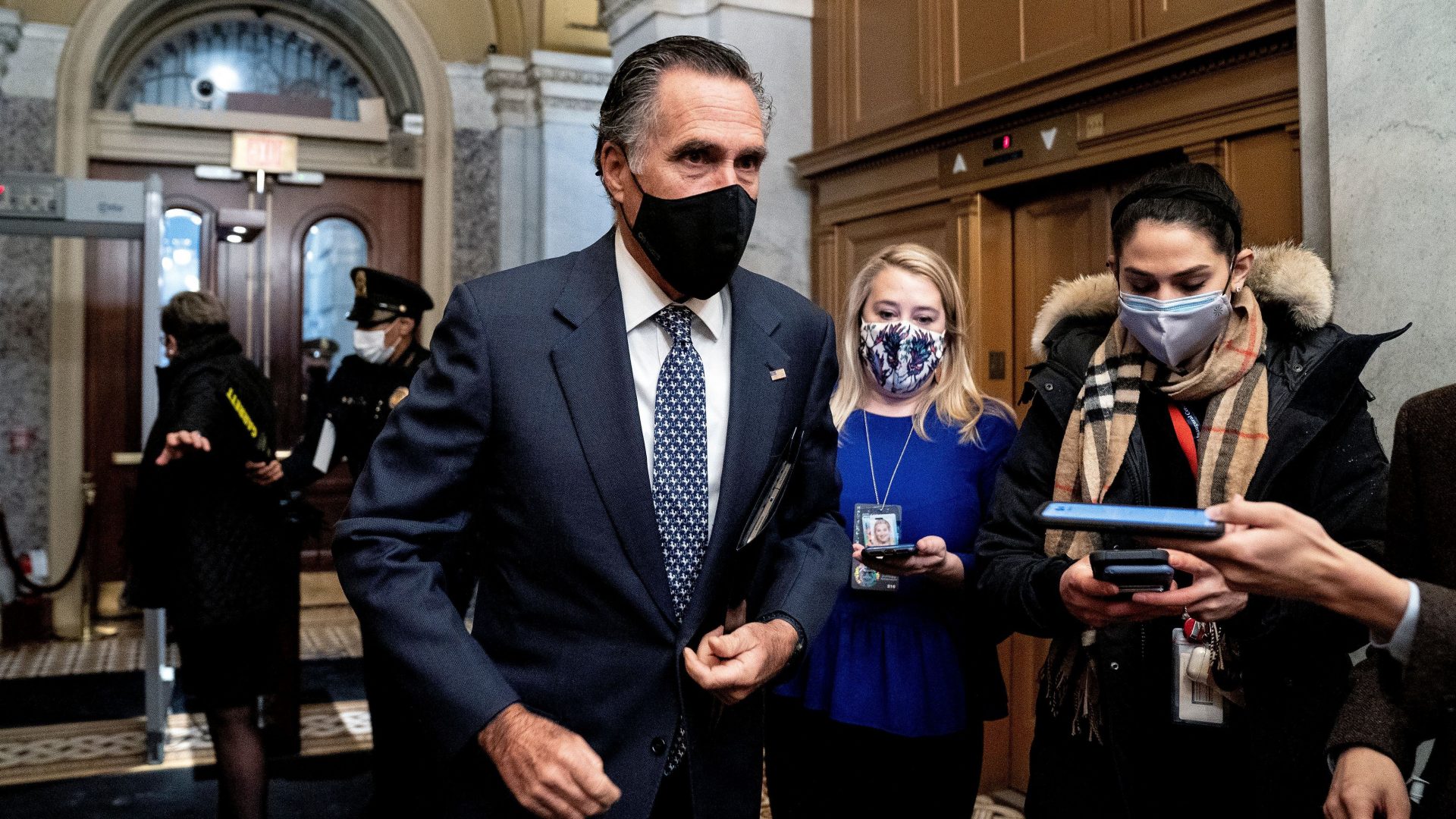 Republican US Senator Mitt Romney arrives at the US Capitol for the fifth day of the second impeachment trial of former US President Donald Trump, on February 13, 2021, in Washington, DC. – The US Senate voted 55-45 on Saturday to allow witnesses in the Trump impeachment trial. Five Republicans voted with Democrats in the evenly split Senate. (Photo by Stefani Reynolds / POOL / AFP) (Photo by STEFANI REYNOLDS/POOL/AFP via Getty Images)

Vote explanation: In a statement after the vote, Romney said Trump’s actions leading up to and on Jan. 6 were a violation of his oath of office.

“President Trump attempted to corrupt the election by pressuring the Secretary of State of Georgia to falsify the election results in his state,” the statement reads. “President Trump incited the insurrection against Congress by using the power of his office to summon his supporters to Washington on January 6th and urging them to march on the Capitol during the counting of electoral votes. He did this despite the obvious and well known threats of violence that day. President Trump also violated his oath of office by failing to protect the Capitol, the Vice President, and others in the Capitol. Each and every one of these conclusions compels me to support conviction.”

Political situation: This wasn’t Romney’s first time harshly criticizing Trump or breaking ranks with his party. He was the only Republican to vote to convict Trump on one article during the former president’s first impeachment trial in 2020, and in recent weeks was called “a joke” and a “traitor” by Trump supporters while traveling from Utah to Washington, D.C.

The former governor of Massachusetts and 2012 GOP presidential nominee was elected to the U.S. Senate from Utah in 2018. He won with nearly 63% of the vote. 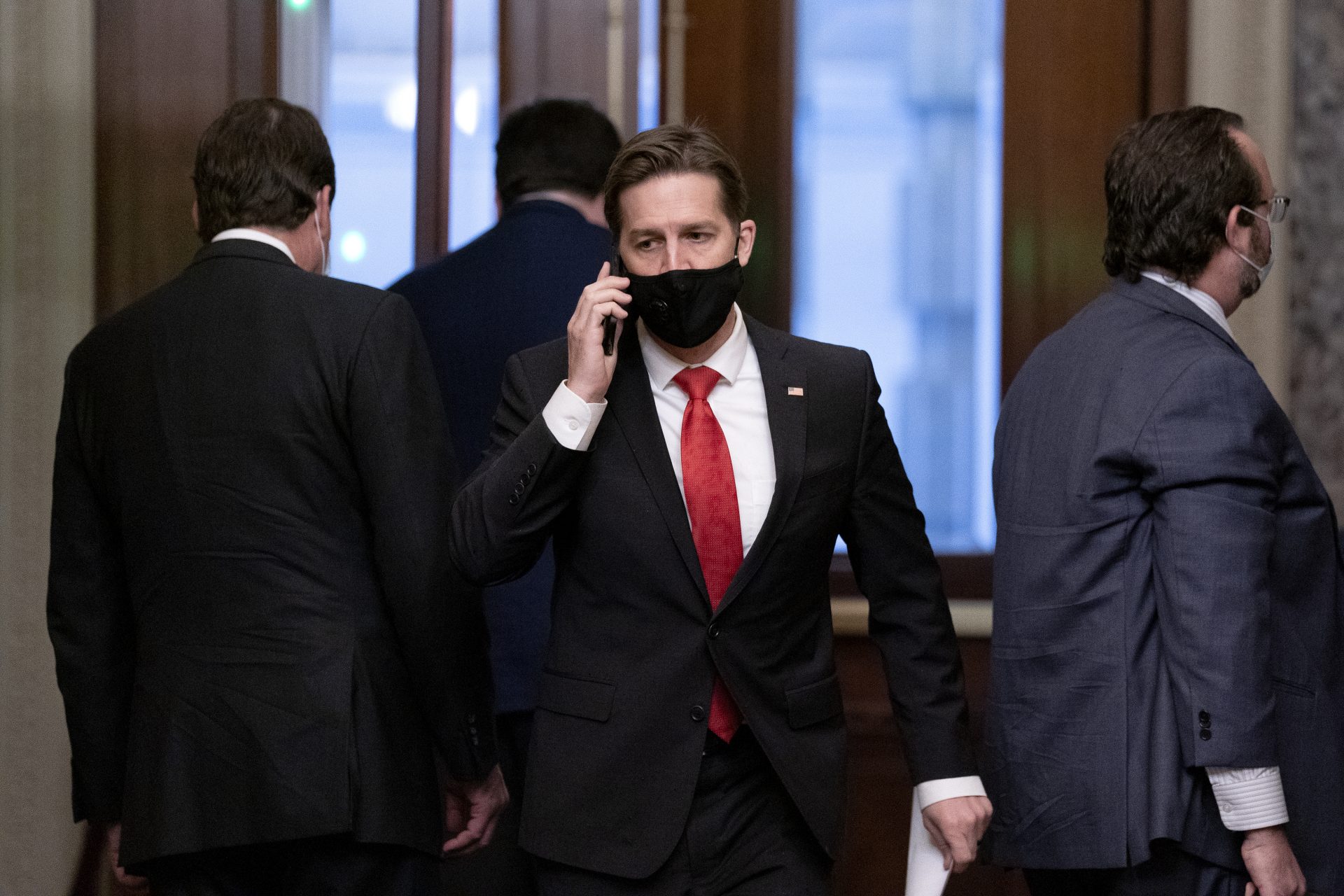 Sen. Ben Sasse, R-Neb., center, walks on Capitol Hill on the fifth day of the second impeachment trial of former President Donald Trump, Saturday, Feb. 13, 2021 at the Capitol in Washington.

Vote explanation: Sasse labeled his vote to convict a vote of “conscience” in a statement Saturday.

“In my first speech here in the Senate in November 2015, I promised to speak out when a president – even of my own party – exceeds his or her powers,” he said. “I cannot go back on my word, and Congress cannot lower our standards on such a grave matter, simply because it is politically convenient. I must vote to convict.”

He cited Trump’s repeated baseless claims that the election had been rigged against him.

“Those lies had consequences, endangering the life of the vice president and bringing us dangerously close to a bloody constitutional crisis. Each of these actions are violations of a president’s oath of office,” Sasse said.

Political situation: Sasse has spoken out against Trump in strong ways in recent months. In a call with constituents in October, Sasse worried out loud that Trump would bring down the Republican-controlled Senate in November.

And after blasting Trump’s election fraud claims, Sasse preempted a potential censure vote by the Nebraska GOP State Central Committee by releasing a video in which he maintained that “politics isn’t about the weird worship of one dude.”

Sasse handily won reelection in 2020 — getting almost 27,000 more votes than Trump in the Republican state — and won’t have to campaign again until 2026.

Wintry conditions are expected for large swaths of U.S. early into the week