ATLANTA, GA - NOVEMBER 03: Poll workers help voters get ready to cast their ballots at The Metropolitan Library on November 3, 2020 in Atlanta, Georgia. After a record-breaking early voting turnout, Americans head to the polls on the last day to cast their vote for incumbent U.S. President Donald Trump or Democratic nominee Joe Biden in the 2020 presidential election. (Photo by Megan Varner/Getty Images)

The proposals come in the aftermath of the unprecedented onslaught of disinformation about the conduct of the 2020 election by former President Trump and some of his GOP allies.

(Washington) — After an election that saw record voter turnout, with many of those voters casting their ballots early and by mail, some GOP state lawmakers are proposing a wave of new voting laws that would effectively make it more difficult to vote in future elections.

The proposals come in the aftermath of the unprecedented onslaught of disinformation about the conduct of the 2020 election by former President Trump and some of his allies in the Republican Party.

“Some folks bring these proposals forward and say, ‘well we just need to address confidence in our election systems,’ when it’s some of those very same people, or at least their allies and enablers, which have denigrated our election system by either telling lies or at least leveraging or relying on other people’s lies to justify some of these policies,” said Steve Simon, Minnesota’s Democratic secretary of state, at a meeting of state election officials last week.

A recent analysis by the Brennan Center for Justice found 106 bills had been filed by Republican lawmakers in 28 states that would restrict voting (the group also found 406 bills in 35 states that would expand voting access). Many of the bills would limit voting by mail, add new voter ID requirements, make it more difficult to register voters and would give states greater leeway to purge voter files if voters don’t consistently cast ballots in every election. 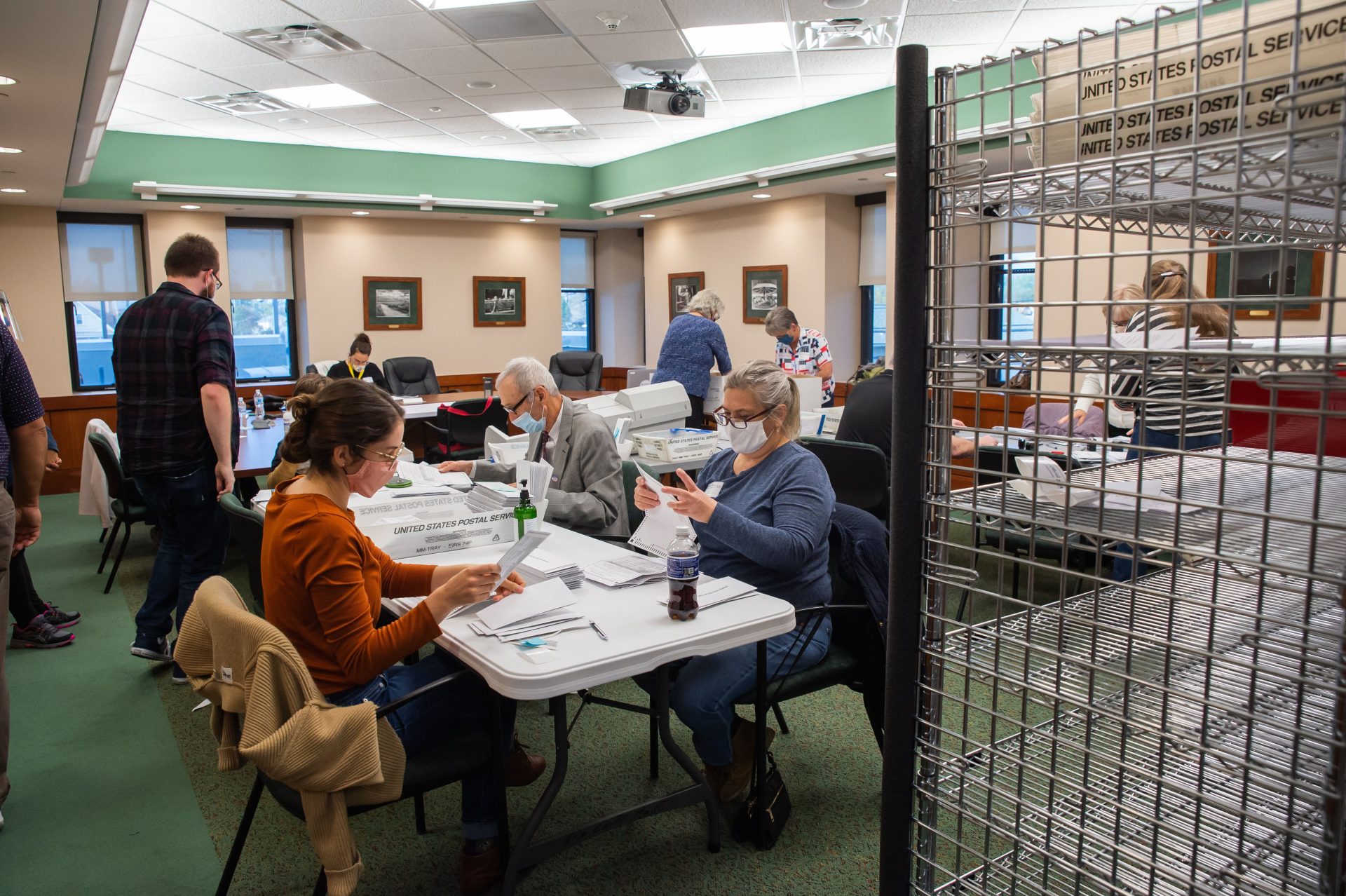 “Some of them are for show, some of them have to be taken more seriously,” said Trey Grayson, a former Republican Secretary of State in Kentucky at the same meeting of state election officials.

Some of the most sweeping proposals come in Arizona and Georgia, where President Biden won narrowly but Republicans control all levers of the state government.

If all of the proposals announced by state Senate Republicans last week became law, future elections in the rapidly-changing state would look dramatically different.

If enacted, only a small subset of Georgians currently able to vote absentee by mail would be eligible to do so, and those who qualify would have to submit some sort of photo ID with their application either online or on paper. They would not be allowed to get an application from outside groups, and could only return ballots through the mail or deliver in person to the county elections office. If someone moves to Georgia, or moves within the state, they would have to remember to opt in to having the Department of Driver Services update their voter registration. If they relocate to Georgia after a November general election they could not participate in the runoff.

Some of the lawmakers proposing the bills spent the past few months making baseless claims of voter fraud with Georgia’s elections.

Democrats and their allies have denounced the proposed bills.

“This unhinged set of voter suppression bills from a radical Senate Republican leadership appears intended to appease conspiracy theorists like those who stormed the Capitol last month,” voting rights group Fair Fight spokesman Seth Bringman said. “The bills are unnecessary by Republicans’ own assessments of the 2020 election, and designed to limit access and help Republicans stop losing elections in Georgia. Republicans wrote Georgia’s election laws, but they were humiliated on Nov. 3 and Jan. 5, so they are seeking to silence Georgians, particularly communities of color, who exercised their power to change Georgia.” 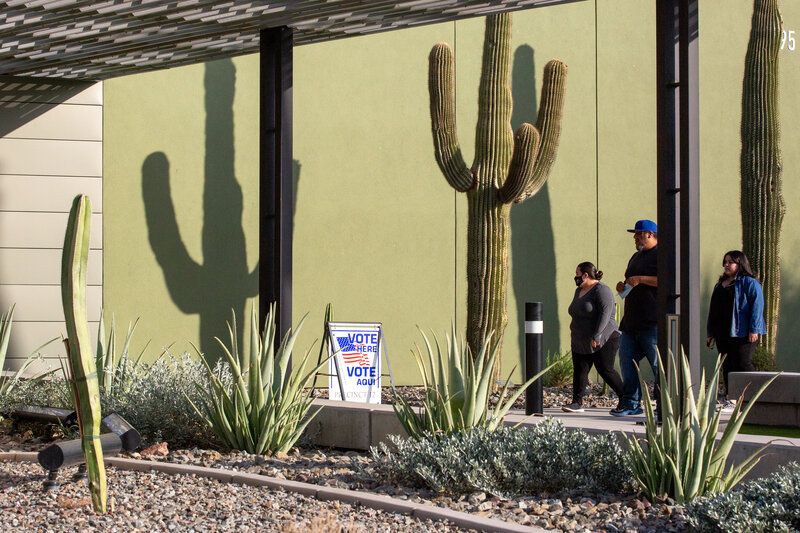 Voters at a polling location on Nov. 3, 2020 in Eloy, Ariz. Arizona lawmakers are considering a number of measures, including one that would allow the state legislature to ignore voters’ wishes and award the state’s electoral votes itself. Courtney Pedroza/Getty Images

In Arizona, where a record number of voters cast ballots last fall, primarily by mail, Republicans legislators have used the backdrop of misinformation and doubt to propose dozens of bills critics warn would make it harder to vote in the future and easier to challenge the election results.

Those include direct attacks on Arizona’s ballot-by-mail system. Most Arizonans opt to receive an early ballot in the mail, then have the option to mail it back or hand deliver it to collection sites, county election headquarters or polling places. One bill would abolish the state’s permanent early voting list, though the sponsor walked it back within hours. He is still pushing legislation that would require early ballot envelopes to be notarized.

Another bill would allow voters to receive ballots by mail, but would bar them from mailing the ballot back and any ballots returned by mail would no longer be counted.

Beyond bills that impact how Arizonans vote, other legislation would directly impact the results of the presidential election.

By law, Arizona’s 11 Electoral College votes are awarded to the winner of the popular vote statewide. One bill pushed by a GOP lawmaker would divide up electors by the state’s nine congressional districts, similar to how electors are awarded in Maine and Nebraska. But instead of awarding two at-large electors to the winner of the popular vote, the Republican-controlled legislature would assign those electors to its preferred candidate.

Another separate proposal by GOP Rep. Shawnna Bolick would allow the legislature to simply override the will of the voters by allowing legislators to overturn the certification of presidential electors by a simple majority vote at any time before inauguration.

The bill was introduced on the heels of calls by some legislative Republicans to appoint electors for former President Trump, despite the state’s voters choosing President Biden. In a statement, Bolick defended the bill as a “democratic check and balance.”

“The mainstream media is using this elections bill as click bait to generate misleading headlines. This bill would give the Arizona Legislature back the power it delegated to certify the electors,” she said. 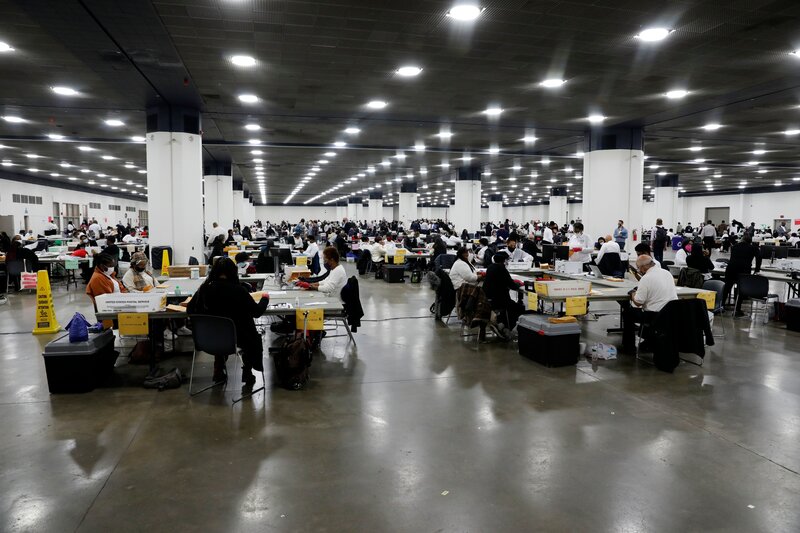 Election workers work on counting absentee ballots for the 2020 general election at TCF Center on Nov. 4, 2020 in Detroit. Jeff Kowalsky/AFP via Getty Images

In Michigan, another swing state that Biden won amid record voter turnout, Republican lawmakers have held more than 26 hours of oversight hearings about the administration of the 2020 elections.

In a recent hearing, Ingham County Clerk Barb Byrum urged lawmakers to, “acknowledge that the Big Lie was just that, a lie” adding, “I would ask that you announce to the public what you know to be true of all of these hearings: that the November 3, 2020 election was fair and free of fraud. Repeating the false claims that have been disproven time and time again will do nothing but continue to weaken the faith in our elections.”

Yet key Republicans, including state Rep. Matt Hall, who hosted a hearing with Trump’s personal lawyer Rudy Giuliani, continue to argue, “The trust in our elections process has been shaken and it must be restored.”

As far as reforms go — there is widespread agreement that the state was unprepared for the massive increase in absentee voting that was driven by the pandemic and new state voting laws. But Democrats and Republicans disagree on what needs to happen next.

Democratic Secretary of State Jocelyn Benson announced in early February that she’d like to mail absentee ballot applications to all registered voters in advance of federal elections, allow early processing of absentee ballots, and ban open-carry firearms within 100 feet of polling places.

But it’s unlikely that Republicans will be eager to pass any of Benson’s reforms. Republican Rep. Ann Bollin, chair of the state House Elections and Ethics committee said, “If her goal is truly to work together in a bipartisan manner, I can’t imagine why she would continue to bring up emotionally charged policy proposals that have already been struck down by the courts.”

While Benson’s decision to mail absentee ballot applications in 2020 was repeatedly labeled as illegal by party operatives and targeted by the president, two lower courts ruled in Benson’s favor saying she acted legally sending applications. However, it’s unlikely Republicans like Bollin who control the legislature would enshrine that process in law. Possible areas of common ground in election reforms include more training for poll challengers and election workers, and early processing of absentee ballots.