In this Tuesday, Jan. 5, 2021, file photo, Speaker of the House Bryan Cutler, R-Lancaster, left, talks with incoming House Minority Leader Joanna McClinton, D-Philadelphia, on the House floor before the Pennsylvania House of Representatives are sworn-in at the state Capitol in Harrisburg, Pa. After only their first few weeks of work, tensions already are high among lawmakers meeting in-person at some state Capitols — not because of testy debates over taxes, guns or abortion, but because of a disregard for coronavirus precautions.

Coronavirus outbreaks stoke tensions in some state capitols like Pennsylvania

At least five Pennsylvania lawmakers also have become ill with the coronavirus this year, in addition to a dozen who had it last year. 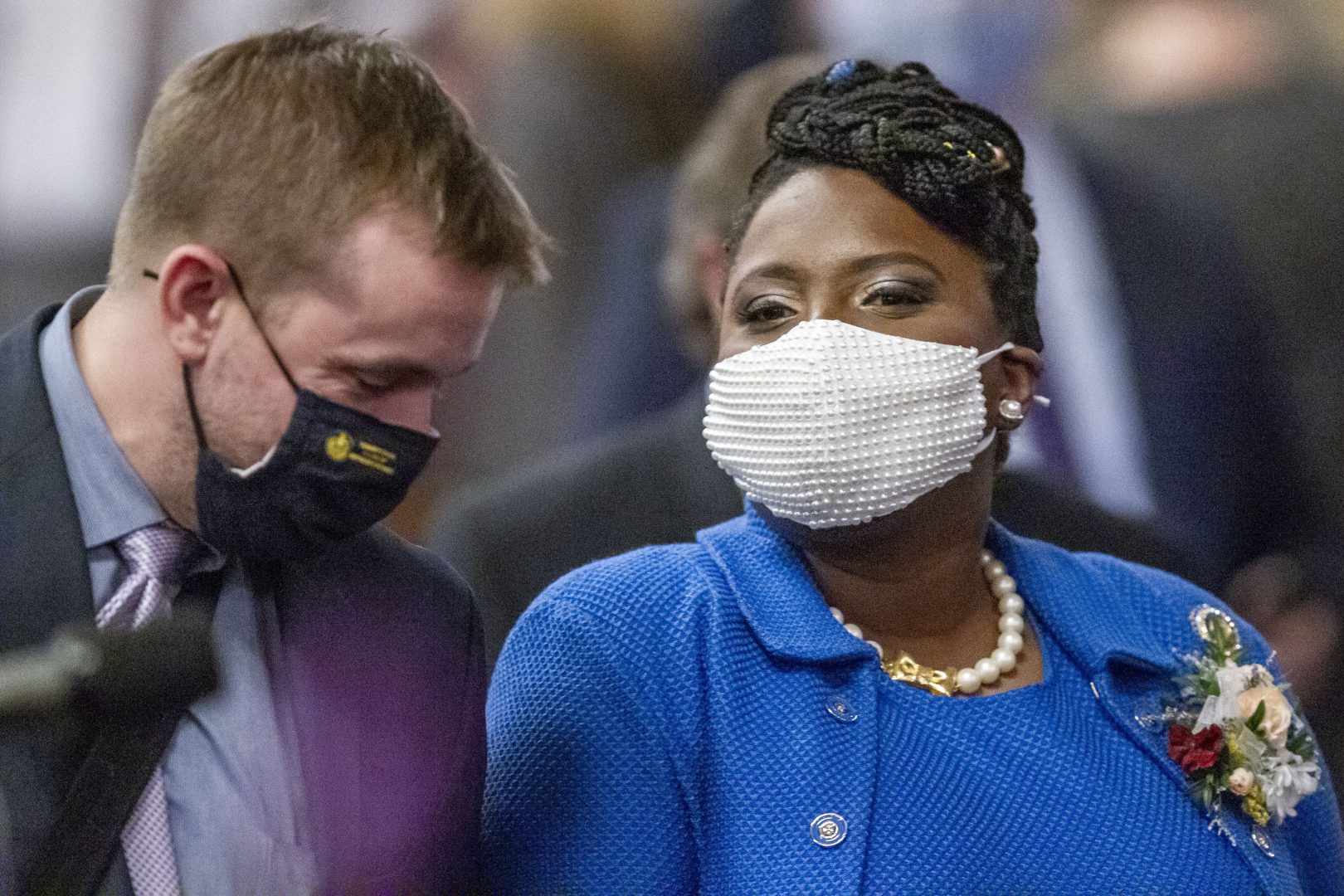 In this Tuesday, Jan. 5, 2021, file photo, Speaker of the House Bryan Cutler, R-Lancaster, left, talks with incoming House Minority Leader Joanna McClinton, D-Philadelphia, on the House floor before the Pennsylvania House of Representatives are sworn-in at the state Capitol in Harrisburg, Pa. After only their first few weeks of work, tensions already are high among lawmakers meeting in-person at some state Capitols — not because of testy debates over taxes, guns or abortion, but because of a disregard for coronavirus precautions.

(Jefferson City, Mo.) — After only their first few weeks of work, tensions already are high among lawmakers meeting in-person at some state capitols — not because of testy debates over taxes, guns or abortion, but because of a disregard for coronavirus precautions.

In Georgia, a Republican lawmaker recently was booted from the House floor for refusing to get tested for the coronavirus. In Iowa, a Democratic House member boldly violated a no-jeans rule to protest the chamber’s lack of a mask rule.

And in Missouri, numerous lawmakers and staff — some fearing for their health after a COVID-19 outbreak in the Capitol — scrambled to get vaccinated at a pop-up clinic before legislative leaders warned that the shots weren’t actually meant for them. GOP Gov. Mike Parson denounced the lawmakers as line-jumpers.

House Democratic leader Crystal Quade, who got the shot, blamed the lax policies of the Republican-led Legislature for fostering angst. 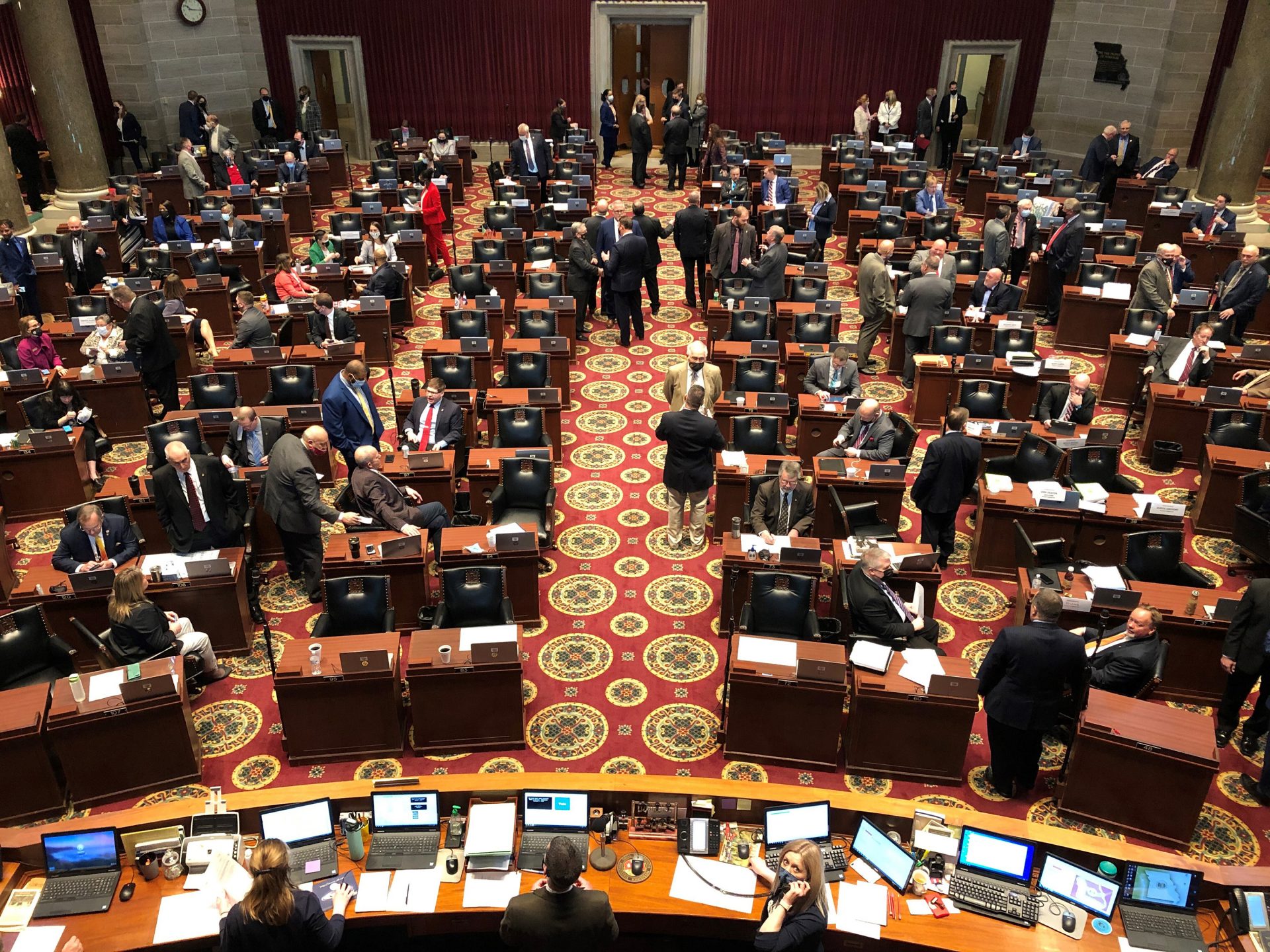 Members of the Missouri House gather in the chamber before the beginning of session on Wednesday, Feb. 3, 2021, in Jefferson City, Mo. The House chamber has no mask mandate and has not modified its seating during the coronavirus pandemic. The House canceled all work for a full week in January after a COVID-19 outbreak.

“We are essentially a super-spreader just waiting to happen,” she said.

Since the start of this year, more than 50 state lawmakers in roughly one-third of the states already have fallen ill with the virus, according to an Associated Press tally. More than 350 state legislators have gotten COVID-19 since the pandemic began, including seven who died after contracting it. Republican lawmakers have had a disproportionate share of the cases, according to the AP’s data.

The U.S. Capitol also experienced a spike in COVID-19 cases — and tensions — after some Republican lawmakers refused to wear masks while sheltering with others during the Jan. 6 siege by supporters of former President Donald Trump.

The Missouri Capitol has had one of the largest outbreaks so far this year, with at least 10 cases among lawmakers. That number might be higher, but it’s hard to know because some lawmakers have refused to say whether they contracted the virus and aren’t required to tell legislative administrators.

Missouri’s legislature has no mask requirement, no formal contact tracing and no ability for lawmakers to vote remotely. Social distancing also is difficult, especially in the 163-member House chamber where desks are packed tightly together.

After being in session for barely a week, the Missouri House canceled all work for a full week “due to the rising number of COVID-19 cases in the building.” House Majority Leader Dean Plocher declined to estimate how many were sick, saying lawmakers had a right to privacy.

In Iowa, Democratic Rep. Amy Nielsen tested positive last weekend. She said she likely was infected at the Capitol, where Republican leaders have refused to require people to wear masks or disclose positive cases.

Iowa House rules require men to wear ties and jackets and prohibit jeans, but Republican House Speaker Pat Grassley said he cannot force members to wear masks and is unwilling to make them leave if they don’t. On Tuesday, Democratic Rep. Beth Wessel-Kroeschell wore jeans on the House floor to make a point and refused a request to change clothes. Grassley then prevented her from speaking during debate.

“Jeans aren’t hurting anybody, but all the people wandering around without masks on, they are,” Wessel-Kroeschell said Wednesday.

Ohio Sen. Cecil Thomas, a Democrat, walked out of a committee hearing Wednesday because many members of the public weren’t wearing masks. In Ohio’s Republican-controlled House on Wednesday, GOP lawmakers — many without masks —rejected Democratic motions to require statehouse staff to wear masks and to allow virtual testimony on bills, including by lawmakers.

For my own safety I tend to avoid the Capitol building. Even though the governor’s order requires following public health guidelines — MANY lawmakers simply ignore them. Today I masked up, kept my distance and made an exception. Here’s one question I asked lawmakers. Story soon. pic.twitter.com/m72jzLaPag

In other states, Republican leaders have run into resistance from their own members while trying to enforce coronavirus precautions.

“I don’t know about you all, but I’ve been to too many funerals,” Ralston told colleagues after having Clark removed.

Clark eventually got tested and returned to the House a couple days later.

In Mississippi, where nearly 50 lawmakers tested positive for COVID-19 last summer, at least five more have come down with the virus since the session began in early January.

At least five Pennsylvania lawmakers also have become ill with the coronavirus this year, in addition to a dozen who had it last year. Conflicts about mask-wearing have been common, with a few dozen Republican lawmakers regularly going maskless on the House floor and during committee hearings.

Last week, House Minority Leader Joanna McClinton rose to make a point: “Masks are supposed to be worn on the floor of the House, and I’ve counted over 30 members that currently are unmasked,” she told the Republican House speaker.

Speaker Bryan Cutler summoned McClinton to the front of the chamber for a private talk after she disputed his response that some lawmakers of both parties were maskless. Cutler eventually encouraged everyone to abide by the chamber’s mask rules. 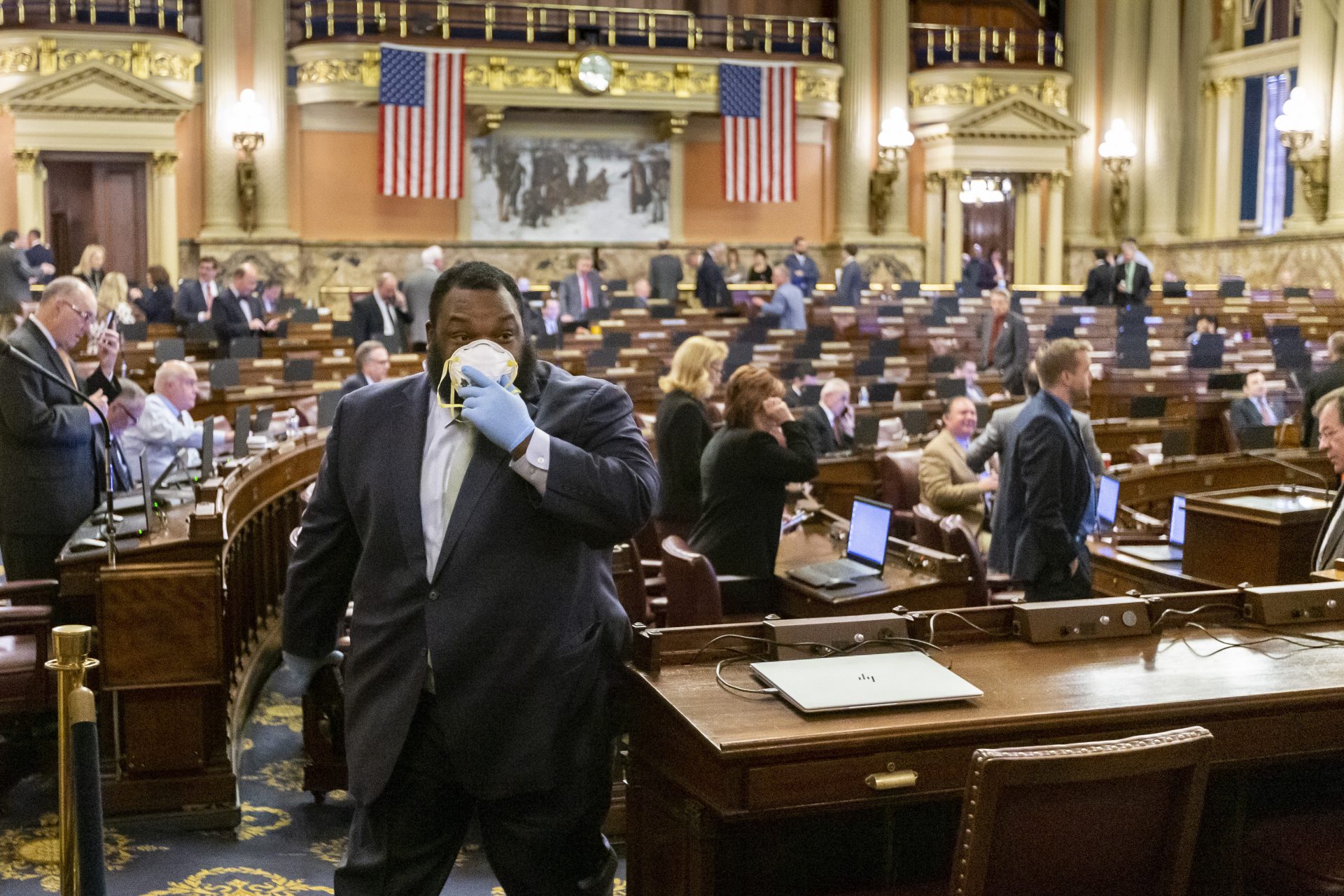 House Minority Whip Jordan Harris, D-Philadelphia, leaves the House floor wearing gloves and a mask after the morning legislative session, Tuesday, March 24, 2020, at the Capitol in Harrisburg, Pa. The House session will be the first in state history where members can vote remotely die to the coronavirus outbreak.

“What I have observed is that certain members of the Republican Party do not adhere to COVID practices in any meaningful way,” Egolf said.

“The new rules are unconstitutional in that they define ‘present’ as not present, the ‘seat of government’ as something other than where the legislature meets, and require members to participate via computers and headphones,” the Republican lawsuit states.

Coronavirus tensions were evident Monday during the opening of Oklahoma’s legislative session. About 20 lawmakers — mainly majority Republicans — didn’t wear masks as they gathered for the governor’s state of the state address. That frustrated House Democratic leader Emily Virgin, whose parents both were hospitalized last year after contracting COVID-19.

“It’s misguided. It’s dangerous. It sets a horrible example,” Virgin said during a news conference outside of an Oklahoma City hospital.

In the Wisconsin Assembly, majority Republicans aren’t allowing lawmakers to attend committee hearings or floor debate remotely. Democratic Rep. Lee Snodgrass tweeted that they were being forced to choose “between their health … or being in person for floor session.”

New Hampshire Rep. Al Baldasaro, a Republican, drew criticism for leading a lengthy committee hearing — much of it without his face covered — after returning from a trip to Florida. The state’s travel rules require anyone leaving New England to quarantine for 10 days upon returning, and Statehouse rules forbid entry to those who recently made such trips.

The House speaker’s office said Baldasaro was allowed to attend the hearing because the state health department considers lawmakers “critical infrastructure staff.” Baldasaro said he eventually put on a face shield to satisfy anyone “whining and complaining.”

“The people elected me to do a job and I will not be showing a sign of weakness by hiding in a basement or my computer because of COVID,” Baldasaro said in an email to the AP.