Holly Neimi, an ESL teacher at Baldwin High School, teaches an English as a second language class this semester.

The Reading School District stands to gain about $95 million — more than $5,000 per student.

(Harrisburg) — The budget proposal Pennsylvania Gov. Tom Wolf unveiled this week would significantly alter how state education funding is distributed, prioritizing the neediest schools based on the most up-to-date data.

That may sound intuitive, but it means largely abandoning a 30-year-old policy known as ‘hold harmless,’ which bars the state from funding school districts at levels lower than the prior year. That policy has largely benefitted districts where enrollment has dropped precipitously at the expense of urban districts where poverty rates are high.

Instead, Wolf would route the majority of the state’s basic education funding through the 2016 funding formula that more closely ties dollars to student need. Currently, only 11% of Pennsylvania’s $6.8 billion basic education subsidy is distributed via that formula.

“Putting all this funding through the fair funding formula means that struggling schools will finally get the resources they need without taking away from schools already being adequately funded,” Wolf said Wednesday.

The governor is also calling for a $1.35 billion increase to the state’s main pot of education cash, which would prevent any districts from seeing a budget cut based on his redistribution proposal. 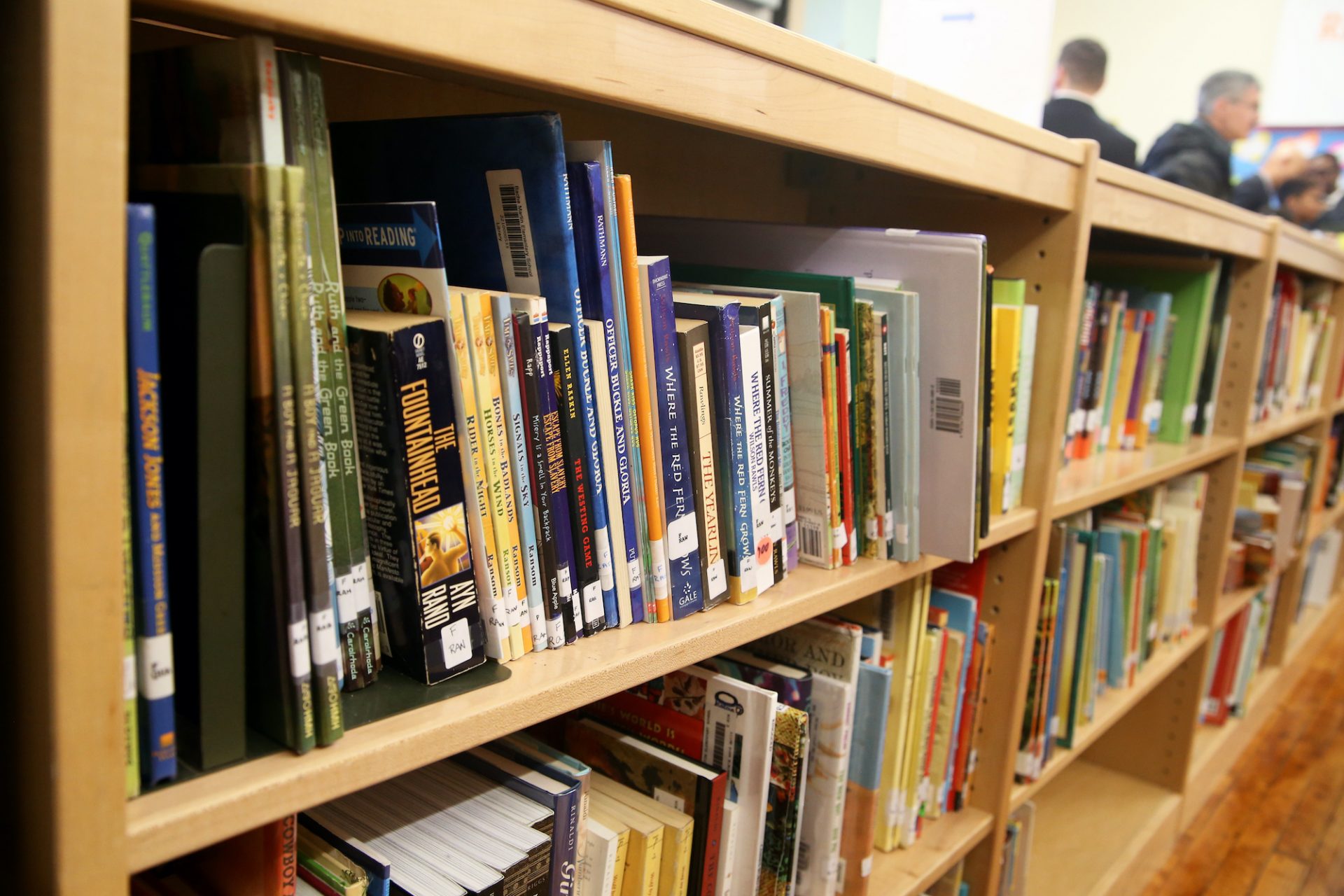 In this Jan. 14, 2019 file photo, books are pictured at the Bache Martin School Library in Philadelphia.

The plan relies on a proposed increase in the personal income tax from 3.07% to 4.49%. Wolf says he’d add exemptions so that only the wealthiest third of Pennsylvania’s residents would see their tax bills increase. Republican leaders have already flatly rejected the idea as “dead on arrival.”

If Wolf’s proposals did pass, they would be transformative for many of Pennsylvania’s most cash-strapped school districts.

The biggest winners in terms of per-pupil funding would be school districts in areas including York City, Allentown, Reading, Johnstown, Pottstown, Scranton, Harrisburg, Aliquippa, and Norristown: all districts with high rates of families in poverty.

The proposed funding change felt like a “shot in the arm” Wednesday for Greater Johnstown School District Superintendent Amy Arcurio. Her district would gain about $13 million under Wolf’s plan — about a quarter of its total current revenue.

Arcurio said her first priority would be replacing a leaky roof on one of the district’s elementary schools.

“We are constantly trying to patch it so that we don’t have pools of water on the floor in our school,” she said. “It’s that profound and simple: We would buy a roof.”

While the Greater Johnstown School District has lost students since the early 1990s, many of the districts that stand to gain the most have grown over the years.

Enrollment in the Norristown Area School District has jumped by more than one-third since 1991. Superintendent Christopher Dormer says that the state’s failure to reflect that in its funding has forced his district to lean harder on local property taxes — they’ve gone up five times in the last five years.

“We are literally driving people to make choices of selling their home [because they can’t afford taxes],” Dormer said. “It breaks our heart. But at the same time we have a responsibility to make sure we have the staffing and the resources to provide what we feel is the best education for our students.” Wolf’s plan would give the district an additional $18 million. 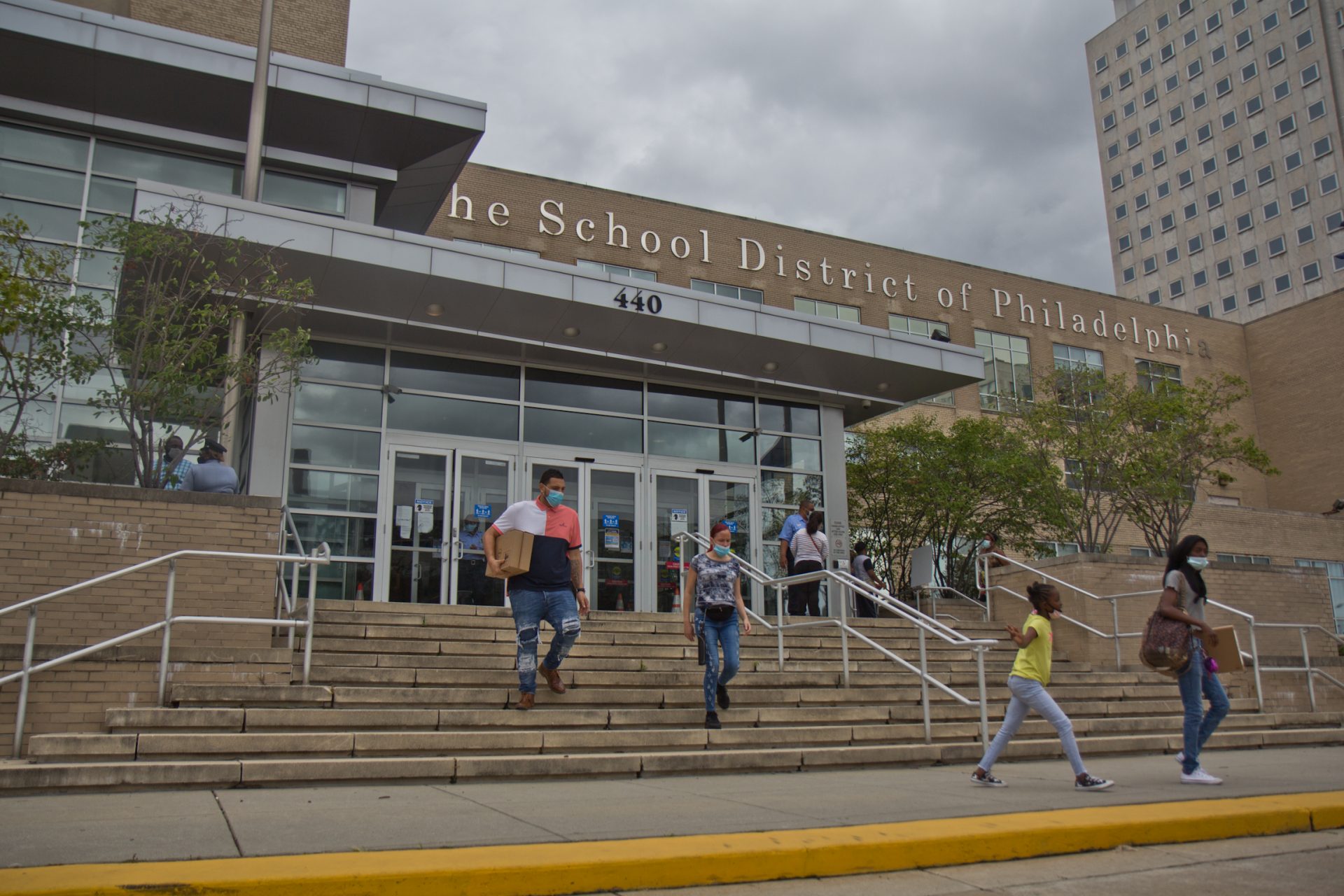 Families stand in line at Philadelphia School District headquarters to pick up Chrome books ahead of the start of the school year Wednesday. (Kimberly Paynter/WHYY)

The Reading School District stands to gain about $95 million — more than $5,000 per student. The district, which considers 94.7% of its students to be economically disadvantaged, is the most underfunded in the state, according to a recent analysis. One-quarter of its students are English-language learners.

“I am elated at the possibility,” said Reading Superintendent Khalid Mumin.

Philadelphia, by far Pennsylvania’s largest school district, stands to gain the most money under Wolf’s proposal. It would see a $260 million increase in basic education funding — about $1,300 dollars per student.

“I applaud Governor Wolf on a bold education budget proposal,” said School District of Philadelphia Superintendent William Hite in a statement Wednesday. “His proposals would have a significant impact on the recurring revenues needed by the District to invest more in classrooms and support the educational success of our students.”

The school districts that would see the smallest per-pupil increase under Wolf’s changes include some of the state’s wealthiest.

The governor’s proposal sets aside $1.15 million to ensure no district would lose funding due to the changes. In whole, the plan would take a large step towards rectifying the deep inequities in Pennsylvania school funding without diminishing state aid for any students

“There would be a lot more wins than losses for education in the state of Pennsylvania,” said Edward Albert, executive director of the Pennsylvania Association of Small and Rural Schools. “I don’t know anybody in education who is not jumping up and down in appreciation.”

Philadelphia begins giving vaccine boosters to the 6,900 people who got first doses through Philly Fighting COVID