What the exit of Pa.’s top election official means for the future of voting

Secretary Kathy Boockvar’s resignation has emboldened her fiercest GOP critics, even though it was not related to her handling of the closely watched vote in a battleground state. 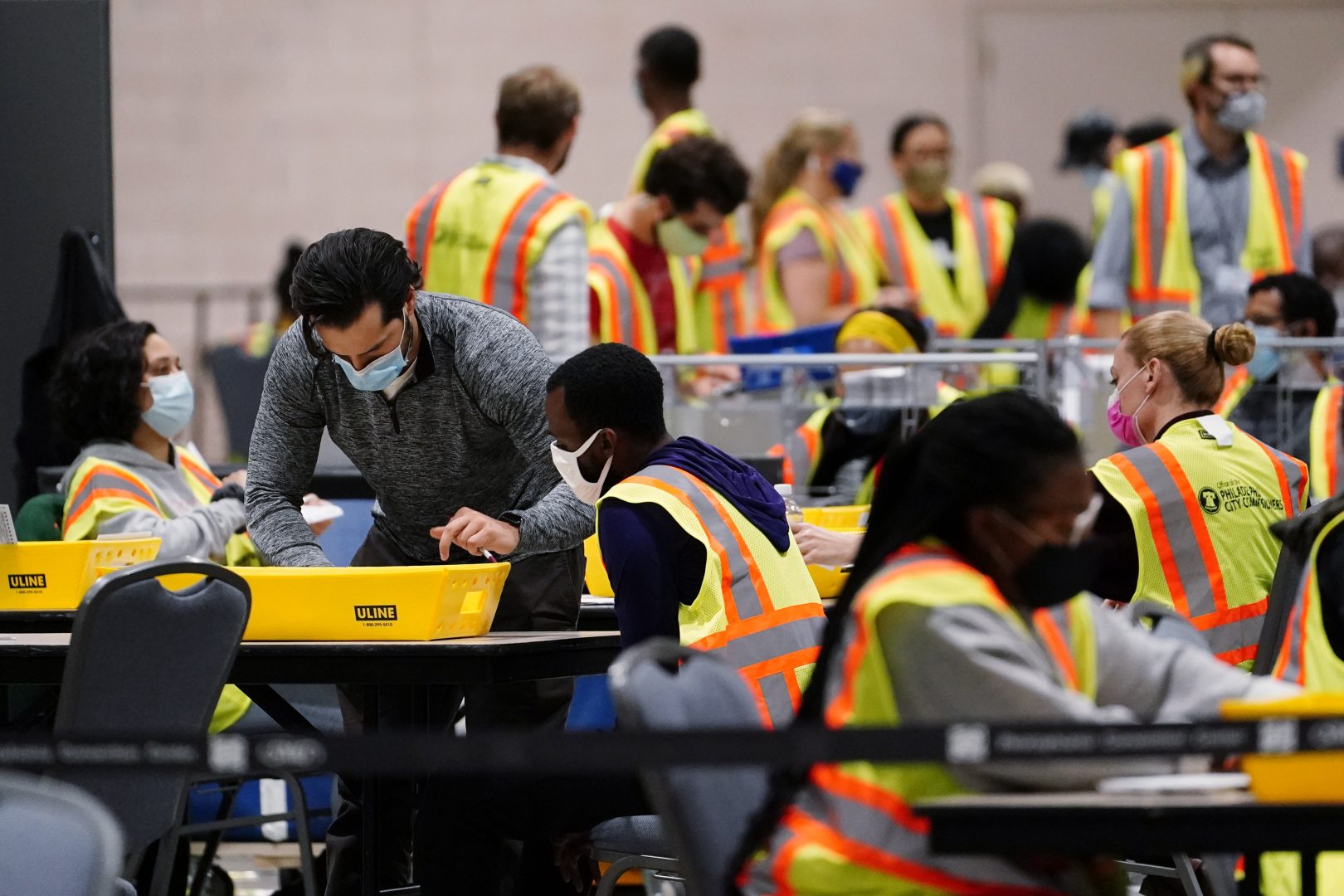 (Harrisburg) — The impending departure of Pennsylvania’s top election official won’t stop House Republicans from continuing a series of hearings about the 2020 presidential contest she administered.

In fact, Secretary Kathy Boockvar’s resignation has emboldened her fiercest GOP critics, even though it was not related to her handling of the closely watched vote in a battleground state.

Boockvar this week announced she would step down after it was revealed the Department of State failed to advertise a constitutional amendment to create a two-year window so adult survivors of childhood sexual abuse can sue the perpetrators and institutions that covered it up.

As a result, voters will have to wait until at least 2023 to see the question on a ballot, unless the legislature steps in.

Republicans, who have been highly critical of Boockvar and her role in the 2020 election, said the mistake was further proof that she was incompetent. Now, they could use her agency’s error to further fuel rhetoric that under Boockvar’s leadership, the election was unlawful, despite judges and federal officials saying otherwise.

“I have been saying for a long time that Secretary of State Kathy Boockvar’s ineptness has been detrimental to Pennsylvania,” Senate Pro Tempore Jake Corman (R., Centre) said in a statement. 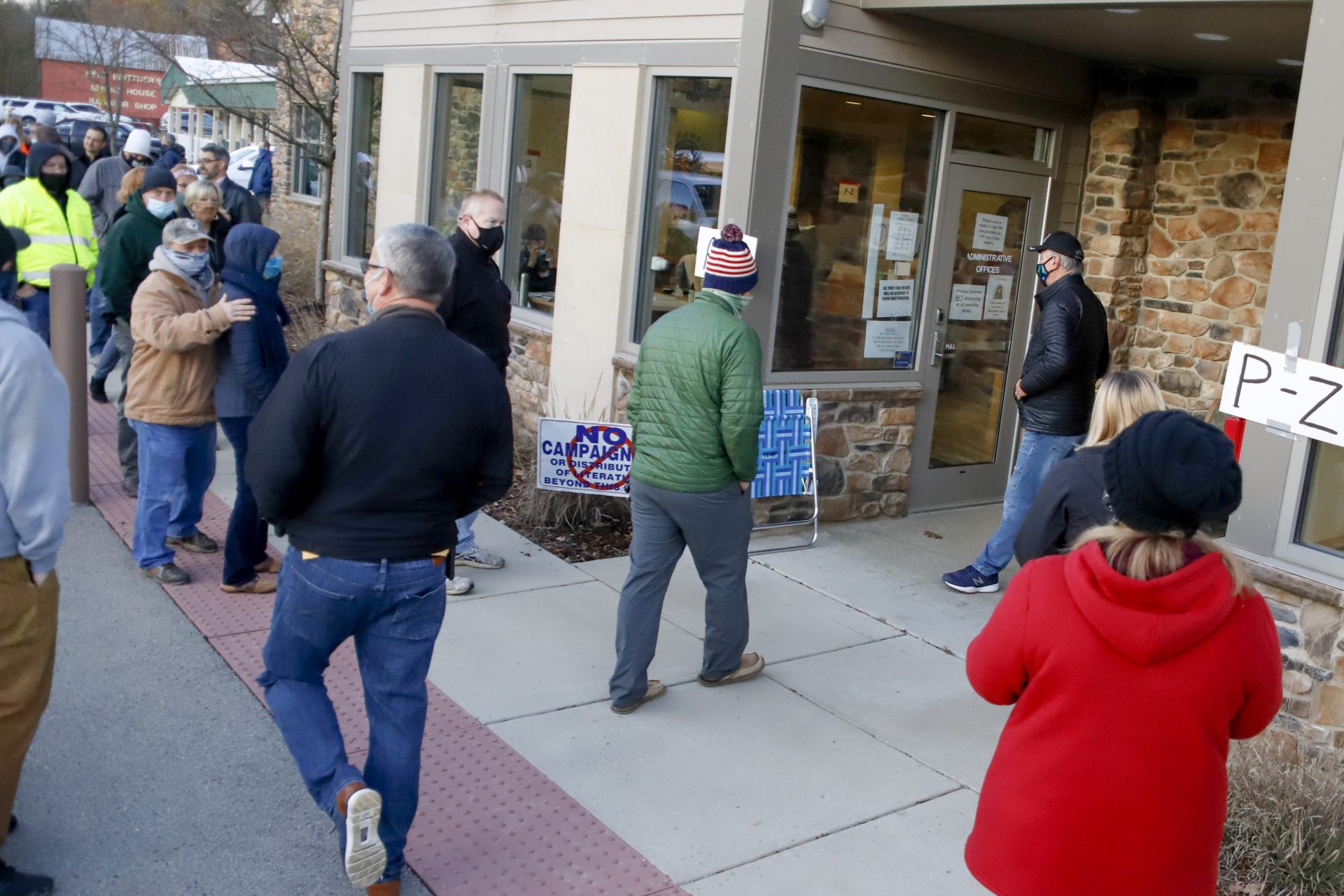 Corman was among the Republicans who called for Boockvar’s resignation months ago, saying she overstepped her authority and “fundamentally altered the manner in which Pennsylvania’s election is being conducted.” In reality, Boockvar issued advice to county election officials unsure of how to apply the state’s new mail-voting law — advice that courts said was valid.

“It plays into their narrative that she was incompetent, that there’s errors in the department,” said Dan Mallinson, a politics professor at Penn State Harrisburg. “I can imagine Republicans in the General Assembly just balking at working with anybody in the secretary of state’s office for the next two years.”

Rep. Seth Grove (R, York), chair of the House State Government Committee, said in a statement his panel’s election-related hearings will continue without Boockvar, who was scheduled to testify as early as next week on post-election audits.

The Department of State’s office did not respond to a request for comment on who would be taking Boockvar’s place at those hearings, although Deputy Elections Director Jonathan Marks also answered questions at the first two hearings.

Grove and other Republicans on the committee grilled Boockvar for hours during the first hearing last month, demanding she explain how she came up with guidance to county election officials.

During the hearing, Boockvar said the guidance — which addressed issues like drop boxes, late-arriving mail ballots, and ballot envelopes with missing information — was issued in response to questions from county officials, who couldn’t find the answers in the state code.

But Republicans said counties interpreted the guidance differently, which confused voters and led them to distrust the election results.

Charlie Gerow, a Republican consultant based in Harrisburg who runs a strategic communications firm, said he was sure Grove and his committee would have a lot of questions for the Department of State at future hearings. 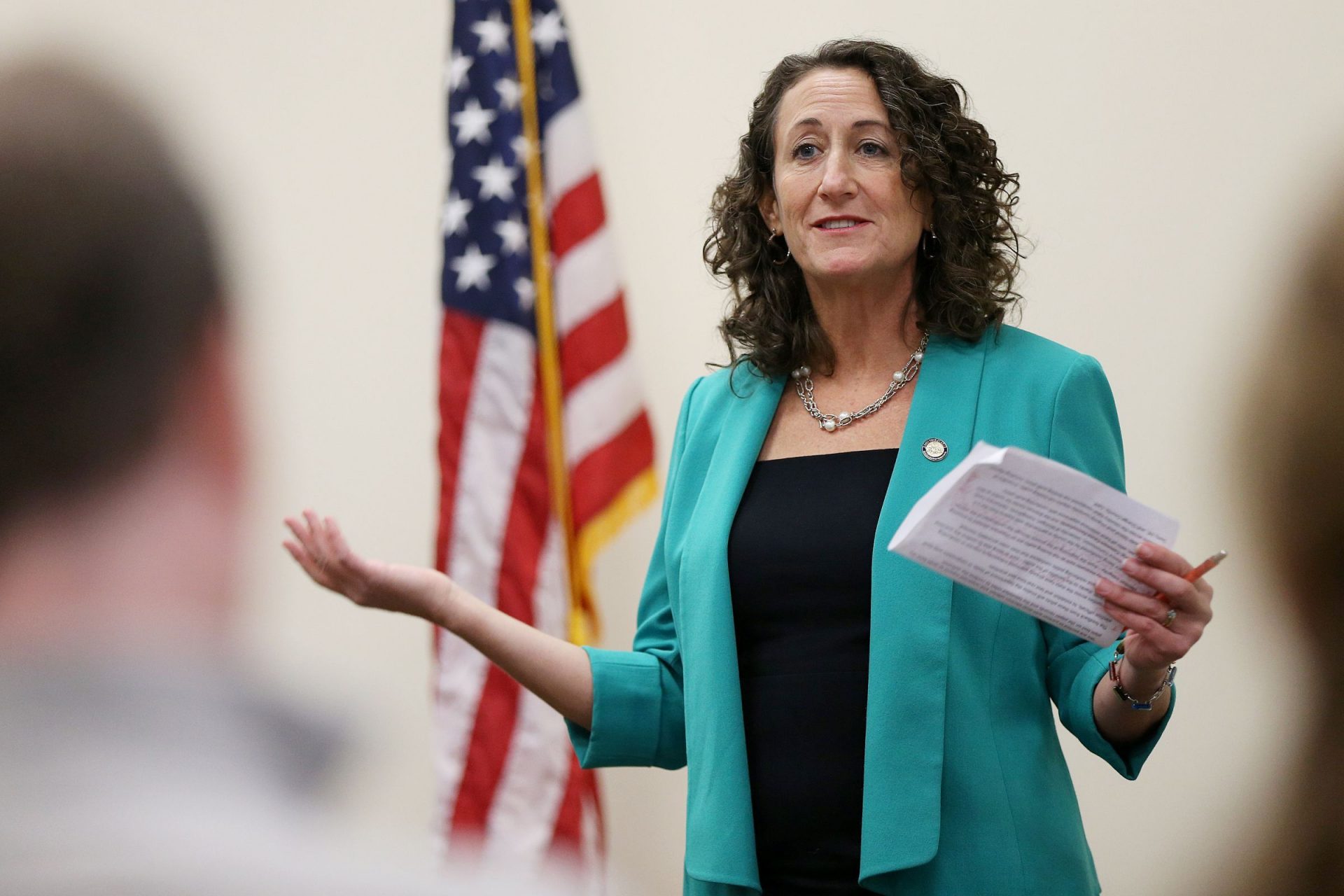 “This certainly makes an already rocky road even more bumpy,” Gerow said. “It’s tragic that Ms. Boockvar was spending her time moving the goalposts for the election process last year when she should’ve been doing her job. This is awful.”

Still, some Republicans, including Senate Majority Leader Kim Ward, kept their thoughts on Boockvar’s role in the election out of their statements about her resignation Monday, instead calling for legislative committees to investigate how the department failed to follow the procedures on the constitutional amendment.

The Department of State said “human error” was behind the failure to advertise the amendment as required. The agency has so far declined to release additional information.

Boockvar’s supporters — including Gov. Tom Wolf, who nominated her to the position in 2019 — were quick to defend the secretary’s role as chief election official even as they commended her for resigning.

“This change at the Department of State has nothing to do with the administration of the 2020 election, which was fair and accurate,” Wolf said in a statement Monday that included a bullet-point list of her accomplishments. “It is through her commitment to helping the counties administer a fair election that we can all have confidence in the accuracy and integrity of the recent election results.”

Adam Bonin, a Democratic lawyer in Philadelphia, said Boockvar’s resignation reflects how seriously she took her obligations as the top official responsible for administering elections.

“It’s unfortunate,” Bonin said. “In an ideal world, she should’ve been able to go out on her own terms.”

Boockvar spent the past several months defending the guidance she issued to county election offices about mail-voting procedures when the law seemed unclear.

“If anything, what this election highlighted is that the secretary of the commonwealth needs more authority, not less, to administer elections,” Bonin said.

Kevin Greenberg, a Democratic election attorney in Pennsylvania, said Boockvar’s resignation will have no impact on any election-related changes she was advocating for, such as giving election officials extra time to pre-canvass mail ballots, which counties were asking for before the November election.

“The same factors apply now as they did before the November election. The common-sense reforms need to pass and they should pass regardless of whether Secretary Boockvar, Rep. Mike Turzai or Sen. Joseph Scarnati are in office,” he said, referring to two top Republicans in the General Assembly who resigned or retired last year.

“The Department is bigger than any one person,” Greenberg said. “Secretary Boockvar built a tremendous team. I’m confident that they will be able to execute what needs to happen over the next several months.” 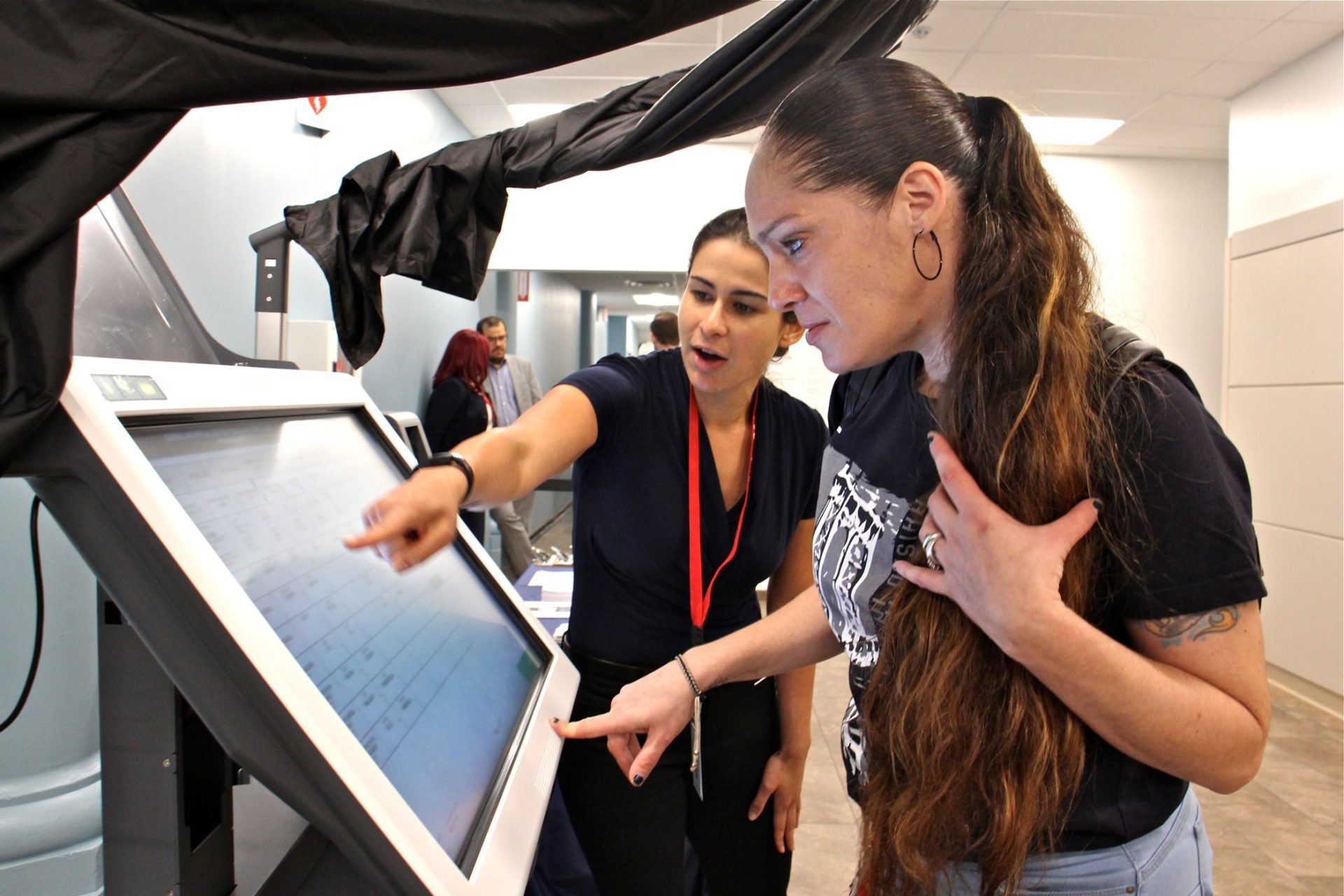 Diane Duffin learns how to use a voting machine with the help of Michelle Montalvo of the City Commissioners Office. Duffin registered to vote for the first time after learning that a conviction did not prevent her from voting in Pennsylvania.

Several county election officials contacted by Votebeat and Spotlight PA said they rarely worked directly with Boockvar, and her resignation wouldn’t affect their daily work. They said they were more likely to work with deputy director Jonathan Marks or Veronica Degraffenreid, who served as special advisor on election modernization and was named acting secretary of the commonwealth Monday.

“As an elections director, it doesn’t really make that big of a change,” Thad Hall, Mercer County’s election director, said of Boockvar’s resignation.

Others pointed out that Boockvar joins a growing list of Pennsylvania election officials that have quit or retired recently. Marks, the deputy elections director for the Department of State, said at a recent House State Government meeting that number is up to at least two dozen since Jan. 1, 2020.

Al Schmidt, the lone Republican on Philadelphia’s three-member board that oversees elections, said Boockvar was committed to ensuring every eligible voter was registered and able to vote.

Thank you @KathyBoockvar for your commitment to public service. Your leadership at @PAStateDept helped counties in Pennsylvania run a free and fair election during an incredibly challenging time.

Schmidt, who will add his name to the list of departing election officials in 2023, said he hoped Boockvar’s critics wouldn’t associate her error over the constitutional requirement with her handling of the 2020 election.

“It’s really lousy that some are trying to take that approach because as far as I’m aware, the one thing has nothing to do with the other,” he said.