“I had nothing to do with the error that happened, but the buck stops with me. I head the agency.”

(Harrisburg) — Pennsylvania’s top election official spent the past year in the hot seat as she oversaw the vote in a swing state where the margin between presidential candidates would end up being barely 80,000 votes out of nearly 7 million cast.

Secretary of State Kathy Boockvar helped implement a complicated 2019 vote-by-mail law, as well as an update rushed through to address the pandemic’s challenges. Many counties were using new paper-record voting machines for the first time. The primary had to be delayed.

And there was a relentless series of lawsuits and legislative hearings launched by Republicans, including a major case brought by then-President Donald Trump’s campaign in which Boockvar was the defendant.

But after navigating the sea of challenges in 2020, Boockvar is leaving her job in Democratic Gov. Tom Wolf’s Cabinet on Friday under a cloud that has nothing to do with last year’s election.

Boockvar’s agency did not advertise a proposed constitutional amendment that would give victims of childhood sexual abuse the ability to file civil claims that were otherwise undated. That failure means a two-year delay until the measure can go to voters for a final approval.

“It’s horrible,” Boockvar told The Associated Press in a phone interview Tuesday. “I had nothing to do with the error that happened, but the buck stops with me. I head the agency.”

Neither Boockvar nor Wolf’s press secretary would say whether the governor asked for or demanded her resignation.

“We agreed this was the best course of action,” she said.

Boockvar declined to say whether any Department of State employees faced consequences for the mistake, which the administration has described as a “simple human error.”

“I’m 100% sure it was an administrative error and nothing more, that they did not track that constitutional amendment. But that’s got significant consequences,” she said. 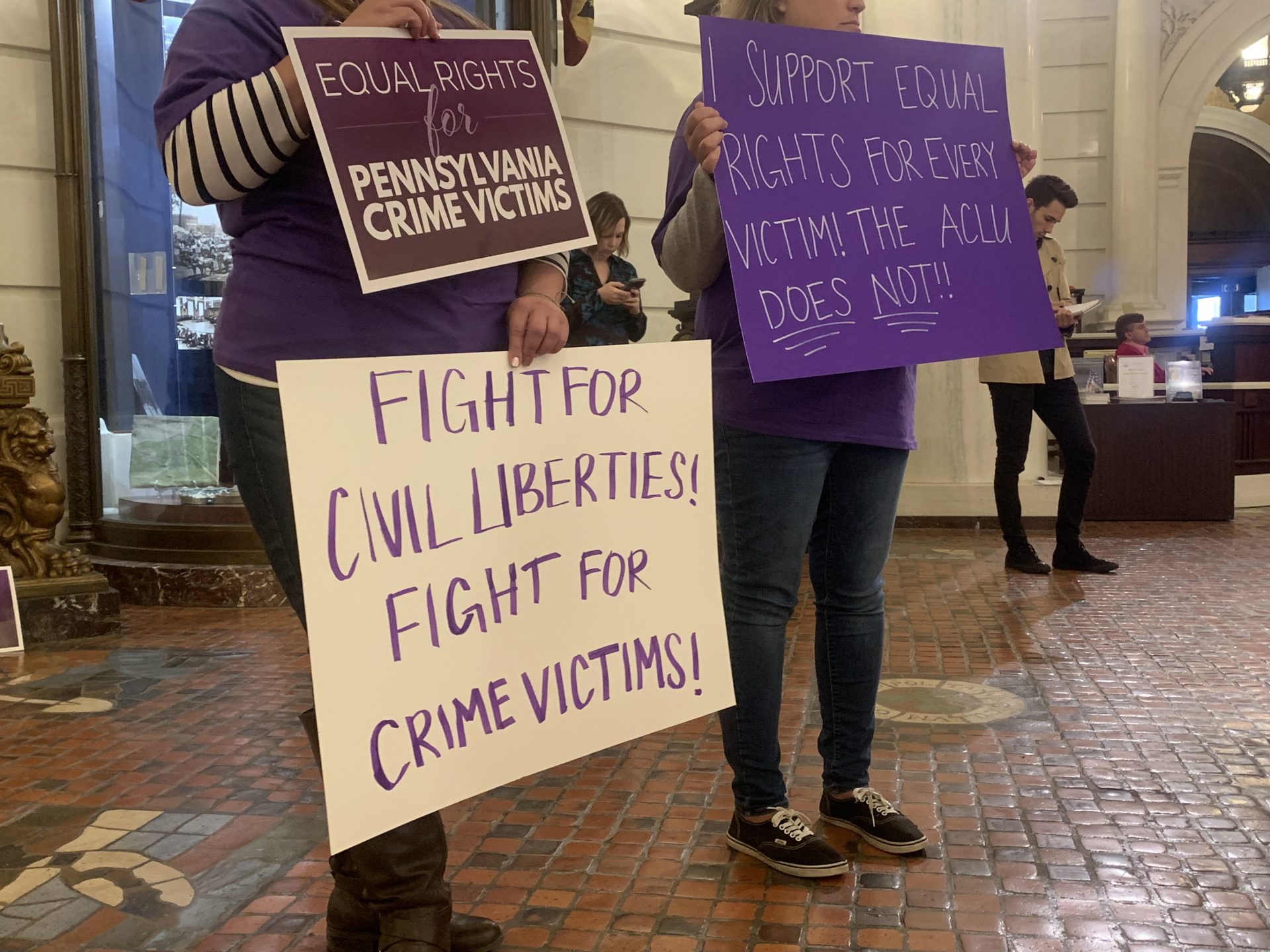 FILE PHOTO: Supporters of Marsy’s Law hold signs in protest during an ACLU press conference announcing its lawsuit at the Pennsylvania Capitol in October 2019.

Boockvar, who lives in Washington Crossing, is a lawyer whose career has included work as a staff attorney in voting rights for the Advancement Project, as a deputy auditor general and for a women’s health care organization in the Philadelphia suburbs. She also launched unsuccessful campaigns for Congress and Commonwealth Court.

She was a senior advisor to Wolf on election modernization before the governor elevated her to be secretary of state in January 2019. At that point, Boockvar said, she figured her biggest challenge would be leading a project that got all 67 counties to upgrade their voting machines.

Then came the November 2019 deal in which Wolf and fellow Democrats were able to expand mail-in voting to anyone who wanted it, and Republicans got rid of straight-ticket voting they saw as a hindrance to their candidates.

“In a perfect world you would not want to roll out a major change in a presidential year,” Boockvar said. “I couldn’t have that changed — everybody wanted it to take effect right away.”

A few months later the pandemic began, and Wolf and lawmakers passed another elections law to push back the primary and make other changes. Boockvar also found herself at the center of policy disputes regarding how vote-by-mail should work, whether ballot drop boxes were legal and the proper way to handle imperfectly filled-out mail ballots.

There were also lawsuits, including one Boockvar filed herself to get the state Supreme Court to clarify that counties should not reject ballots based on poll workers’ subjective judgments about whether signatures match those on file.

On Election Day, the two highest-ranking Republicans in the state Senate, Joe Scarnati and Jake Corman, put out a news release saying Boockvar should resign over her guidance to counties about how to count ballots that arrived late and how to could contact voters to fix problems with improperly completed mail-in ballots.

“She was just extremely difficult to deal with, and to me, her political background is how she operated as secretary of state,” said Corman, now the Senate’s president pro tempore. “She wasn’t a career person that had knowledge of how the department worked.”

Trump’s campaign sued her that week, trying to prevent the results from being certified because seven Democratic-controlled counties in Pennsylvania, including Philadelphia, let voters make corrections to mail-in ballots that were otherwise going to be disqualified for a technicality, like lacking a secrecy envelope or a signature.

“Whenever I wanted to go to the Supreme Court website or see if anything had happened in any of the cases, you would just look up Kathy’s name, because she was the defendant in every single lawsuit,” said Democratic elections lawyer Adam Bonin.

None of the lawsuits alleging fraud was successful, and Boockvar did certify the results, sending Joe Biden’s electoral votes to Washington.

“She was one of primary voices on TV for those two months, assuring people as to the integrity of the election and answering every question,” Bonin said. “She was exceptional, and she had a public role in this that no prior secretary of state has had to have here.”

Boockvar said she received death threats, and she choked up as she confirmed she required special security. She’s been in contact with elections officials in other states who encountered similar problems.

“It is really devastating and infuriating at the same time that people who are spending their lives and their professional work ensuring that people can exercise their fundamental right to vote, the thanks they get are threats to their life,” she said.

She praised her agency staff and said she has never had a more demanding job.

“This amount of commitment and dedication was around-the-clock and around-the-week, every single day,” she said. “As it was for county election officials.”

Her future plans include continuing to work in the elections field, perhaps to combat misinformation and attacks on democracy.

“I’ve been thinking for months about how I can be working in this sphere in a broader capacity,” Boockvar said.