Wolf and acting Health Secretary Alison Beam — who has taken over for the departing Dr. Rachel Levine — held a press conference Tuesday, and alluded to several of the complaints lawmakers have made. 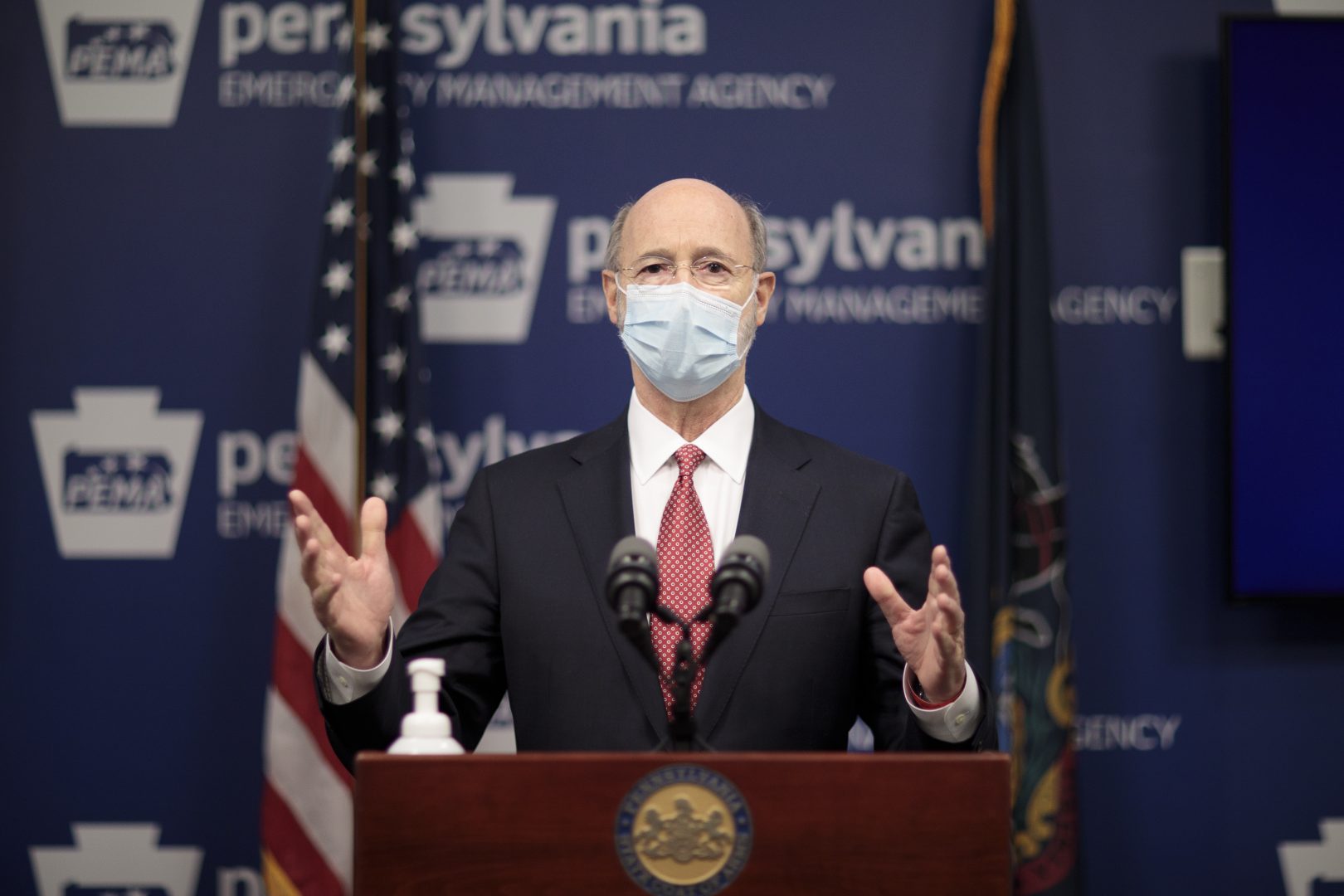 (Philadelphia) — After largely supporting Gov. Tom Wolf’s pandemic response over the past year, some Pennsylvania Democrats are breaking rank to publicly express misgivings about the Wolf administration’s efforts to distribute the COVID-19 vaccine.

One of those critics, State Sen. Katie Muth (D-Montgomery) said behind the scenes, there have been widespread concerns among legislative Democrats that vaccine distribution has been sluggish and confusing.

But she thinks many of her colleagues have been slow to speak out because of a desire to “stay in your lane.”

“I can wholeheartedly say that I vote my values and fight for them, so if a Democrat or a Republican or whoever the hell doesn’t align with them, for me it’s not a hard decision to be outspoken,” Muth said. “If I’m not getting traction or not getting my questions answered, I mean come on. I don’t work for Tom Wolf, I work for the people who elected me.”

Muth and other lawmakers’ concerns primarily center on communication.

The state’s vaccine rollout, they say, has been confounding on several levels. They wish there was better communication about who is eligible, when vaccines will be available, and how to get them — with clearer guides to navigate the commonwealth’s decentralized patchwork of county and private-sector providers. Wolf’s critics in the legislature also believe the state hasn’t done a good job creating realistic expectations for how many doses there currently are to administer.

As evidence, lawmakers point to the hundreds of constituents who call their offices daily seeking help. Donna and Mike Babjak were two of the people who reached out to State Sen. Lindsay Williams (D-Allegheny).

The couple, aged 66 and 68 respectively, are retired and live outside Pittsburgh. They’re eligible for the vaccine and haven’t been able to find appointments, despite waiting for hours in online queues for providers like CVS and Giant Eagle.

“The queue line for Giant Eagle is over an hour,” Mike said. “I just let it run, and when I finally got there it just says there’s no vaccine in your area.”

The Babjaks’ biggest concern isn’t getting their own shots. It’s getting one for their 32-year-old son, Brian, who lives in a special-needs group home.

Brian is legally deaf and blind and has intellectual disabilities, among other health issues. He also has sensory problems that make it near-impossible to wear a mask, and when the Wolf administration announced that younger people who live in long-term care facilities or have severe medical conditions were included in the first phase of the vaccine rollout, his parents were relieved, and assumed he was covered.

But for several weeks, there’s been no movement. Donna says Brian’s caretakers aren’t even sure if he’s eligible.

“It’s frustrating,” she said. “There’s got to be people … who can’t sit on the internet all day waiting for this queue.”

Not knowing what else to try, the Babjaks tapped Williams.

She’d already been involved in internal discussions about problems with the vaccine rollout, and confirmed that many of her fellow Democrats felt the same: communication about available vaccines and where to get them was insufficient.

Several other lawmakers confirmed that these internal frustrations have been brewing for weeks. But they largely stayed quiet, until Williams released a statement last week asking the Wolf administration for a “transparent, clearly communicated, & efficient vaccine distribution plan.”

She said she didn’t intend it as an attack on the administration — just a reflection of the concerns she had heard over and over.

“Understanding that there are a lot of people who have been working very hard … that doesn’t mean we don’t need to make changes,” Williams said.

Muth said she’d also like to have better lines of communication between the administration and legislature, so they have better information for the people in their districts.

“We’ve asked the administration to have a greater role in just having regular communications where it doesn’t take us two weeks to get answers to some of our questions, or someone spewing out talking points they were told instead of just giving answers on a caucus call,” she said.

This week, legislative members had a behind-the-scenes meeting with state health officials. Muth said she came away with many of her questions answered, though she still has misgivings about the state relying so heavily on private health systems and corporations, like pharmacy chains, to distribute vaccines.

But fundamentally, she said, she thinks the process will go more smoothly if Pennsylvanians are given reasonable expectations.

“We need to be more transparent about [the fact that] it’s not an Amazon delivery service. You’re not going to get your vaccine in two days,” she said. “If you sign up, it could be three months. I think even though that’s so frustrating, it’s better than sitting by the phone and worrying.”

Wolf and acting Health Secretary Alison Beam — who has taken over for the departing Dr. Rachel Levine — held a press conference Tuesday, and alluded to several of the complaints lawmakers have made.

Wolf placed much of the blame for the slow rollout on the federal government, noting that Pennsylvania is, so far, only receiving about 143,000 doses of the vaccine per week for its nearly 13 million residents, who will all need two doses in order to be fully vaccinated.

The Trump administration’s rollout was plagued with uneven state-by-state results and had consistently missed major benchmarks. In October, the administration said it expected to distribute 100 million doses by the end of 2020. Officials later lowered the goal to 20 million shots, but the year ended with just three million Americans getting the first dose.

The data the Wolf administration has provided about vaccine disbursement also shows either lags in administering doses on the state level, or lags in reporting. As of last week, more than half of the shots distributed to pharmacies, health clinics and other providers in the commonwealth had not been reported as used.

Becker’s Hospital review, which compiles data on how effectively states are administering the vaccines that they receive, calculated that as of Jan. 25, Pennsylvania had given out just shy of 50% of the vaccines it had in its possession.

The numbers fluctuate often. But that puts the commonwealth in 42nd place, in terms of distribution efficiency. New York, in comparison, is ranked 18th and has distributed about 59% of its vaccines.

“We need to do a better job,” Wolf said — though he and Beam maintained that once vaccine supplies are up, the patchwork of health systems and pharmacies will be sufficient to get doses to the public.

Democrats aren’t the only ones with questions

Wolf and other administration officials have faced criticism at several points in the pandemic. The decision to allow nursing homes to accept patients who had COVID-19 was controversial and widely criticized, as was the governor’s convoluted first round of business closures in the early days of the pandemic.

House GOP spokesman Jason Gottesman said along with communication problems, his caucus is especially frustrated that the administration expanded eligibility for the first phase of vaccine distribution before ever having enough vaccines to cover the initial, smaller group.

Initially, the first vaccine phase only included frontline workers and nursing home residents. A few weeks ago, Wolf expanded it to include people who are pregnant, aged 65 and older, or aged 16-64 with COPD, cancer, sickle cell disease and chronic kidney disease.

“You have the administration seemingly willy-nilly, every week throwing out new guidance and new eligibility for the vaccine,” Gottesman said. “People are confused, and rightly so.”

He pointed to a statement Bucks commissioners had released when Wolf first expanded the initial group of vaccine recipients.

“It is very frustrating that the federal and state governments keep identifying more and more citizens who are priorities for the vaccine without providing the vaccine or even any dates for possible deliveries,” Diane M. Ellis-Marseglia, chair of the Bucks County Commissioners, said at the time.

In his briefing Tuesday, Wolf defended the decision to widen the eligibility window, saying it is a way to get more people in line for a vaccine according to their need.

Donna Babjak, the Allegheny County woman searching for a vaccine for her son, said she doesn’t really care what list he’s on, or where he gets it. She just wants clarity.

“If you could get in a line somewhere, if you could just sign up at Giant Eagle and say, ‘Call me the day that I can get it, and I’ll go,’ I’d be happy,” she said.

Why N95 masks are still in short supply in the U.S.