As the Trump era ends, the school choice movement reckons with its conservative ties

(Philadelphia) — When Philadelphia-area mega-donors Jeff and Janine Yass made headlines recently for their contributions to Republican politicians — some of whom tried to overturn the presidential election — it stirred up a familiar debate in local education circles.

The Yass family has a long history of donating to Republican politicians and conservative causes. They also are among the largest donors to Pennsylvania’s school choice movement.

Therein lies a dilemma that, for some Democrats who support school choice, has caused increasing bouts of self-reflection.

On the ground, many charter school employees and school choice advocates are left-of-center, motivated by a desire to shake up an educational system that they see as not acting urgently enough to help low-income students of color.

But the movement’s growth — and success — has long relied on the political and financial capital of conservatives, who see school choice as a way to inject free-market thinking into the educational bureaucracy.

None of this is new.

What’s new is the reckoning forced by the Trump era, culminating in a violent insurrection that was fomented by Republican lawmakers — carried out with symbols of the Confederacy — who, on other days, could be a charter advocate’s best ally.

“For a period of time, this coalition was able to exist without some of the tensions we’re talking about threatening to rip it apart,” said Mike Wang, a veteran of the Philadelphia education scene who once headed a leading school choice advocacy group that lobbied in Harrisburg.

Will this unusual alliance survive? Can it find new political strength under an administration promising reconciliation and unity? Or will it disintegrate in an era of increasing political polarity?

Those questions loom large now, and the attention now trained on the Yass family shows why.

Not your average donors

Jeff and Janine Yass are not your average education philanthropists in Philadelphia.

Between donations to schools and political candidates, they’ve poured tens of millions into education reform over at least a decade.

A large chunk of that money has gone to Philadelphia School Partnership (PSP), a nonprofit founded in 2010 as a way to pool donations aimed at reforming Philadelphia’s public schools and boosting access to private options.

While PSP is hardly the only funder in this space, its evolution is instructive.

In its early years, PSP brought together a politically diverse group of funders that included the William Penn Foundation, the Lenfest Foundation, the Bill and Melinda Gates Foundation, the Samuel S. Fels Fund, and the Walton Family Foundation, among others. It earned the open, sometimes vociferous, support of Philadelphia mayors, school superintendents, and Republican state officials.

There have always been critiques of the charter and choice movement from the left, especially from those who decry the influence of private money in public education. Opponents say the rise of the sector has further decimated resources for the neighborhood schools on which the most disadvantaged students rely. Others say there’s a lack of transparency for the way charters operate and spend money, and point out that their very presence creates fiscal inefficiency.

Still, the movement has enjoyed historic support from large swaths of the political left at the national, state, and local level. And although PSP’s opponents liked to frame the group as a tool of free-market ideologues, many of its staffers have been idealistic, young, and liberal. Drawn by a sense of outrage over what they saw as the public system’s disregard for schools in low-income neighborhoods, many of these young staffers liked that PSP granted money to charter, Catholic, and public schools in Philadelphia.

“Part of the appeal to me was that it was sector-agnostic,” said Cliff Thomas, a self-described liberal who worked at PSP from 2015 to 2017.

Even before the Trump era began, many staffers felt conflicted between their own personal ideologies and whom the organization courted for money and support.

Multiple former staffers recalled tension over PSP’s decision not to release a statement after the police shootings of Philando Castile and Alton Sterling in the summer of 2016. At the time, the staffers said, PSP senior leadership felt it unwise to comment on a non-education issue, even one that deeply affected the communities of color PSP wanted to serve.

Another former employee, who asked to remain anonymous, recounted similar friction after donor and longtime board member Janine Yass penned an op-edsupporting Donald Trump’s nomination of Betsy DeVos as Secretary of Education.

“That was circulated widely to horror among staff,” the former PSP employee recalled. “This is who we’re affiliated with now? It’s time for me to go.”

Those incidents underscored what some saw as an organizational shift at PSP.

Some on the inside felt PSP drifted further away from sector-agnosticism over time and became more of a cheerleader for charter and private schools. There was also a sense, among some, that right-wing donors like the Yass family were increasingly vital to the organization’s financial viability — which subtly influenced the types of schools receiving support.

(PSP leadership declined to comment for this story. An attempt to reach the Yass family was unsuccessful.)

PSP does not publish how much it receives from individual donors in a given year.

Because public charities like PSP are not required to list their donors on tax forms, it’s possible the Yass family privately contributed similar amounts in the organization’s early years out of sight from public disclosure. But at the very least, that money did not come from the Susquehanna Foundation. Before 2017, the foundation didn’t record giving any money to PSP on its public tax forms.

Big picture, PSP’s evolution — or at least its perceived evolution among some staff — point to larger tensions.

For years, liberal education reformers opted to find common ground with conservative backers,  isolating education issues in order to sustain a political partnership. Now, some wonder if it’s worth preserving that coalition given the increased national focus on structural racism and inequality — a lens that views education inequality as an outgrowth of, and contributor to, economic and social inequality.

Over the summer, for instance, the head of Pennsylvania’s largest charter-school group, a longtime conservative activist, stepped down after she criticized some of the people protesting George Floyd’s killing by a police officer. Her critique inspired backlash among some in the school-choice community and prompted reflections over who the charter movement’s ties itself to.

More recently, an article in the Guardian about the Yass family inspired another round of reckoning. The paper found that Jeff Yass was one of the biggest contributors to the Club for Growth, an influential PAC that’s typically poured millions into Republican campaigns.

That includes the campaigns of Josh Hawley, Ted Cruz, and Lauren Boebert — three leading voices in the effort to overturn Joe Biden’s election victory. The PAC also contributed to Republicans, like Pennsylvania Senator Pat Toomey, who opposed the overturn effort. And Yass reportedly told another journalist that he believes the election was legitimate and couldn’t have known Hawley and Cruz would attempt such an effort when he made the donations.

Regardless of intent, the optics of Yass’s donations revived a set of questions for left-leaning education reformers — questions that have intensified during the Trump era.

Is it ok to form partnerships with a group of people on education issues if they oppose police reform, raising the minimum wage, or increased voter access? If there is a line in the sand, where should it be drawn?

“I don’t have the perfect answer,” said one former PSP staffer who asked to remain anonymous. “I definitely think step one is living your mission and values out loud. And that includes who you decide to partner with. That’s larger than education.” 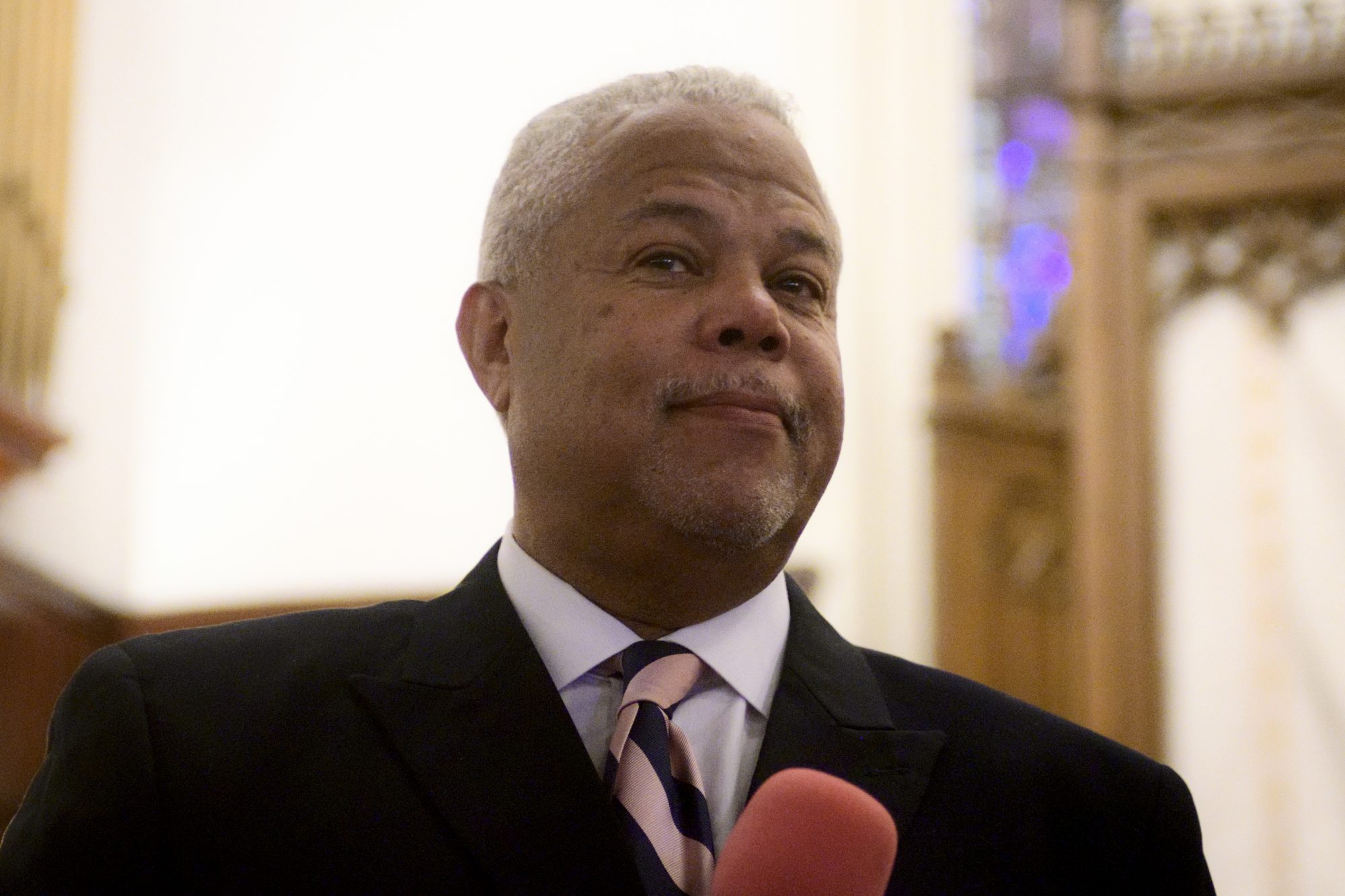 Not everyone, though, is as worried about the conservative politics of certain school-choice supporters.

State Sen. Anthony Hardy Williams (D-Philadelphia) is a longtime friend of the Yass family and a frequent recipient of their largesse. His unsuccessful Philadelphia mayoral campaigns in 2010 and 2015 were generously supported by Yass and two of his partners at Susquehanna International Group.  Williams is unapologetic about partnering with Yass — and one of the few people willing to talk on the record about his connection to the investment titan.

“Jeff is a friend and he’s a good man from all I know,” said Williams. “I think it’s disingenuous for people to run and hide when asked to talk about him.”

Yass’s contributions are “all over the map” politically, said Williams. And he says he isn’t concerned about the optics of taking money from Yass if he can use it to support the kinds of school choices that Black parents — and his constituents — demand.

Williams says applying an ideological litmus test to donors is hypocritical and unproductive.

He points out that many liberal critics are happy to send their kids to disproportionately white magnet schools or move to racially isolated suburbs. Does that not contribute to the same systematic inequality that they decry?

“Why aren’t you looking at yourself in the mirror,” Williams said.

“People ask me, ‘Tony, how could you be associated with [Yass],’” Williams added. “What do you mean? I look past your warts and your faults.”

He’s given heavily over the past two years to Democrats who support school choice. Chief among them is State Representative Jordan Harris (D-Philadelphia), to whom Students First gave a combined $600,000 in 2019 and 2020. Williams received $25,000 in 2020.

Students First has not given directly to any Republican politicians in Pennsylvania over the last two years. But the PAC’s largest contribution — a combined $8 million — was to another PAC called the Commonwealth Children’s Fund. That fund has seeded the campaigns of dozens of Republican candidates.

Yass will likely remain a big player in Pennsylvania politics. He contributed another $9 million to the Students First PAC shortly after the 2020 election, according to campaign finance records.

Privately and publicly, school-choice advocates say preserving the traditional education reform coalition has become increasingly difficult. White progressives — once relatively friendly to the cause — became increasingly skeptical of charter schools and other school-choice initiatives over the course of the Trump presidency, polling shows.

The question now is how to proceed politically and philanthropically.

Though he’s not holding his breath, State Sen. Williams hopes a Biden presidency will cool partisan tensions and create more opportunities for compromise.

“Independent thought has to be part of what we do in this country,” he said.

Mike Wang, who used to work for Philadelphia School Partnership, wants organizations like PSP to do more grassroots organizing work with parents of color. He praised the organization’s overall effectiveness, but believes a closer tie to communities will yield deeper partnerships.

He also thinks education reformers need to change the way they talk about school reform, to frame it as a structural inequality issue instead of simply a quest for greater choice. If that turns off some conservative donors, Wang thinks that’s ok.

“Education reformers have to step back and reframe this issue for what it is,” Wang said. “It’s about removing structural barriers.”