People attend a rally in support of jailed opposition leader Alexei Navalny in Saint Petersburg on January 23, 2021. - Navalny, 44, was detained last Sunday upon returning to Moscow after five months in Germany recovering from a near-fatal poisoning with a nerve agent and later jailed for 30 days while awaiting trial for violating a suspended sentence he was handed in 2014. 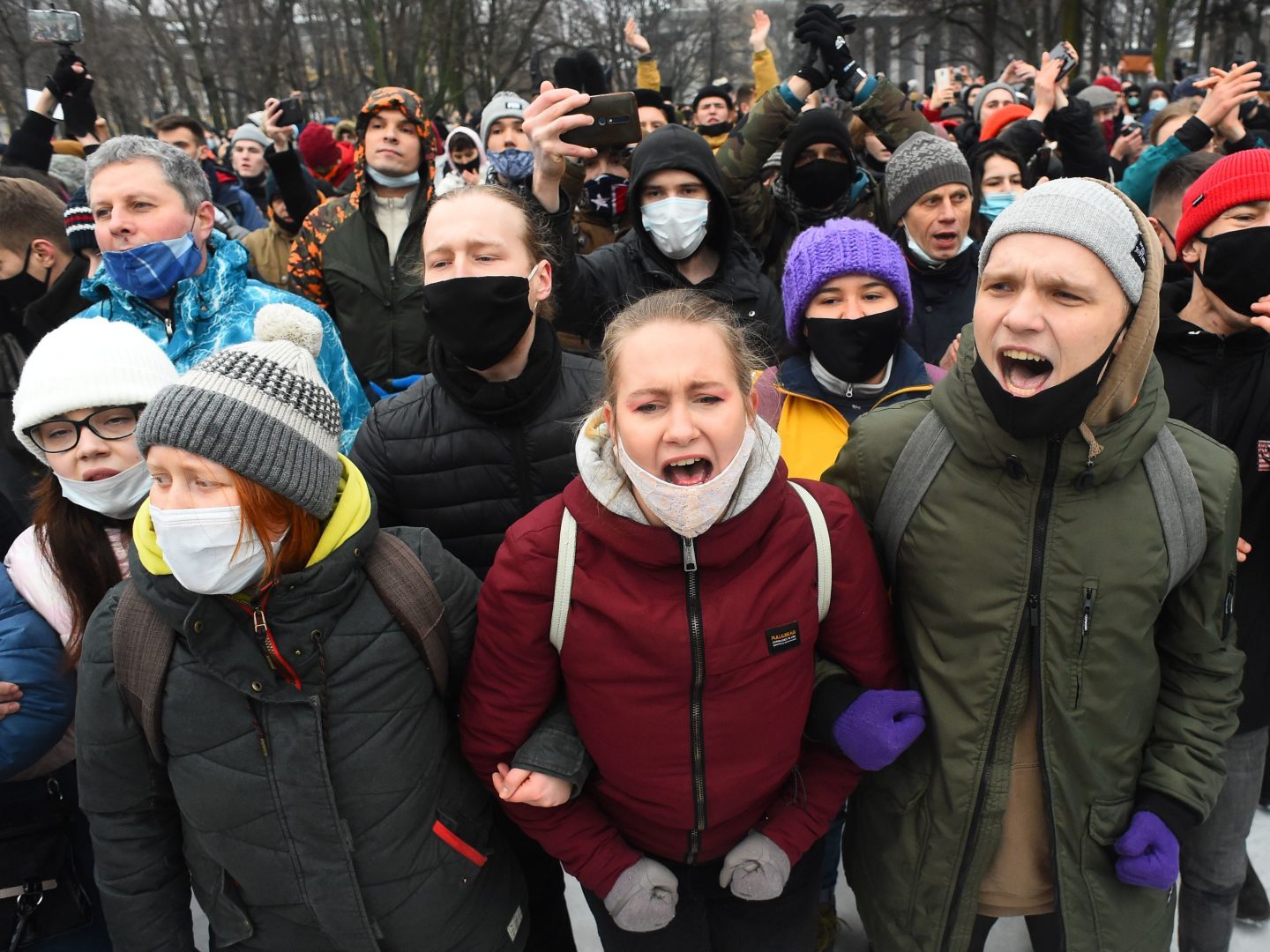 People attend a rally in support of jailed opposition leader Alexei Navalny in Saint Petersburg on January 23, 2021. - Navalny, 44, was detained last Sunday upon returning to Moscow after five months in Germany recovering from a near-fatal poisoning with a nerve agent and later jailed for 30 days while awaiting trial for violating a suspended sentence he was handed in 2014.

(Washington) — Protests exploded across Russia over the weekend, fueled largely by videos posted to social media, despite attempts by the Russian government to censor content across various platforms. The protesters braved extreme cold, police brutality and mass arrests, calling for the release of opposition leader Alexei Navalny, who was detained last week shortly after returning to the country.

Social media helped spark and organize the protests, after Navalny called on his supporters to take to the streets on Saturday. Videos and posts promoting action quickly went viral, particularly on TikTok, YouTube and Instagram. TikTok videos with the hashtags involving “Free Navalny” and “23 January” garnered more than 200 million combined views by Thursday, according to the news site Open Media. 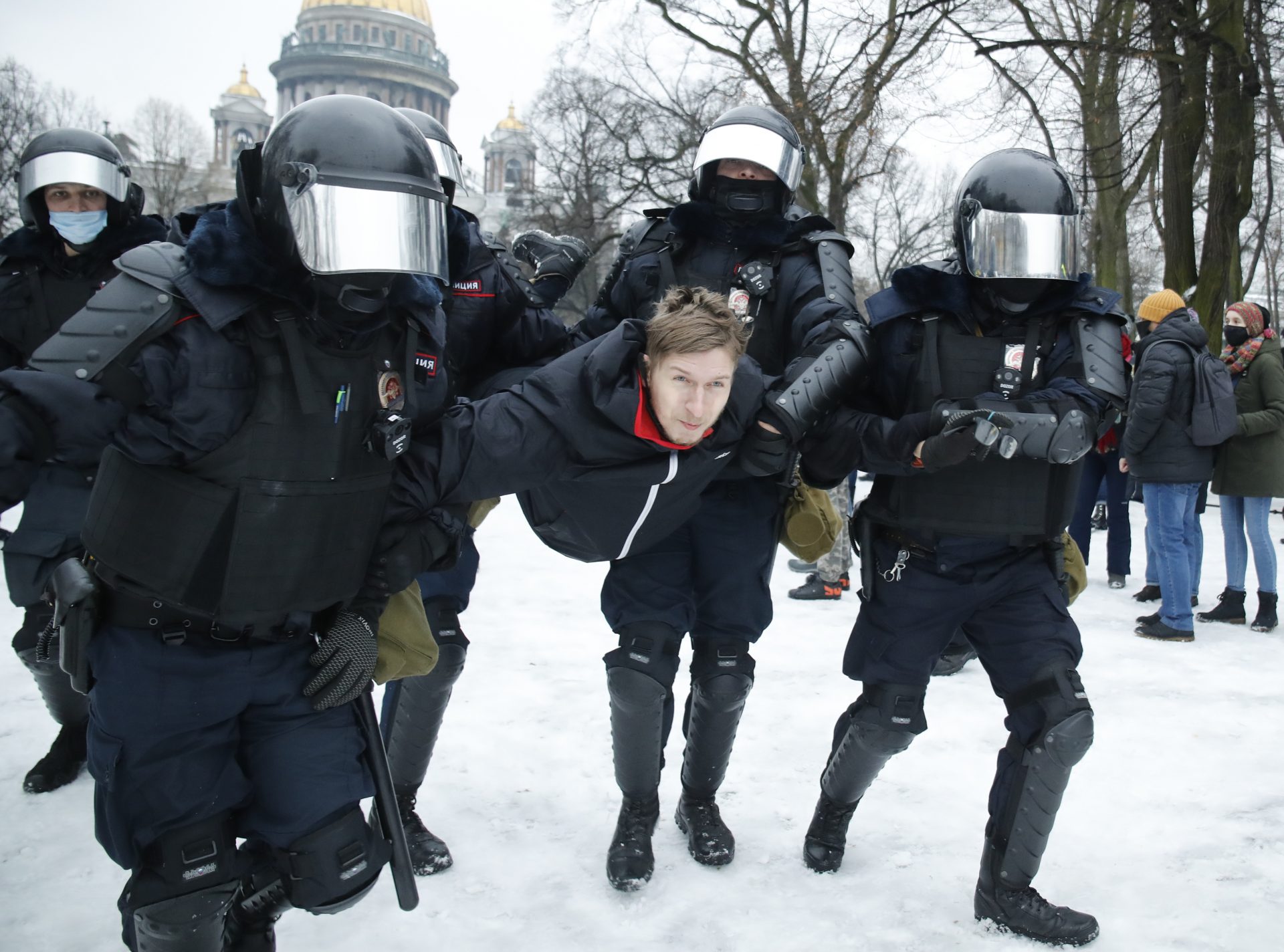 Police detain a man during a protest against the jailing of opposition leader Alexei Navalny in People gather in St.Petersburg, Russia, Saturday, Jan. 23, 2021. Russian police are arresting protesters demanding the release of top Russian opposition leader Alexei Navalny at demonstrations in the country’s east and larger unsanctioned rallies are expected later Saturday in Moscow and other major cities. (AP Photo/Dmitri Lovetsky)

Young people in particular began filming themselves dressing for upcoming rallies, or as The Moscow Times noted, removing Russian President Vladimir Putin’s portrait hanging in classrooms and often replacing it with Navalny’s photo.

But the Russian media regulator Roskomnadzor quickly jumped to pressure social media platforms to remove videos that it said called for minors to participate in protests, warning that it was illegal for them to do so. On Friday, the government claimed that 38% of all offending videos on TikTok, 50% on YouTube and 17% on Instagram had been removed. By Saturday Roskomnadzor said more messages had been deleted on TikTok and Russian social media app Vkontakte. Facebook and Google, the owners of Instagram and YouTube respectively, expressed uncertainty about the accuracy of the numbers, Gizmodo reported.

The attempt at restricting social media communication didn’t stop protesters from showing up in the tens of thousands in dozens of cities across Russia, from the island of Sakhalin, just north of Japan, all the way to Moscow, posting on social media along the way and begging for the world to watch.

In Irkutsk, near the Mongolian boarder, thousands chanted “We will not leave!”

In the northern area of Yakutia, protesters gathered in temperatures around minus 60 degrees Fahrenheit.

@ioannZH shares photo of Navalny protest in Yakutia, where its -50 c pic.twitter.com/MUq0ZEkwXe

Even in areas that usually avoid opposition protests, large crowds came out in support of Navalny.

In Moscow, where protesters streamed through the streets in droves, demonstrators clashed with riot police in tense standoffs.

One video of a police officer grabbing a child while onlookers filmed on smartphones has been viewed hundreds of thousands of times.

And in some places, protesters threw snowballs at government officials and police.

Thousands rally for Navalny across Russia, in temperatures as cold as -60F. Follow our coverage here as the day unfolds: https://t.co/X0ijUZtZ9d

By Sunday, over 3,500 demonstrators across the country had been detained, according to OVD-Info, an activist group that monitors arrests and protests. The group said it had never tracked so many arrests.

“Continued efforts to suppress Russians’ rights to peaceful assembly and freedom of expression, the arrest of opposition figure Aleksey Navalny, and the crackdown on protests that followed are troubling indications of further restrictions on civil society and fundamental freedoms,” said department spokesperson Ned Price in a statement. “We call on Russian authorities to release all those detained for exercising their universal rights and for the immediate and unconditional release of Aleksey Navalny.”

Anton Svetushkov, a business student attending the protests on Saturday night, told NPR it was his first rally ever. Even as arrests were happening around him, he said he was ready to be there.

“There is a certain point where you say, OK, now I have to go beyond my own insecurities and just step up,” Svetushkov said.

House poised to transmit Article of Impeachment against Trump to Senate