The U.S. Capitol is seen behind fences on January 17, 2021 in Washington, DC. After last week's riots at the U.S. Capitol Building, the FBI has warned of additional threats in the nation's capital and in all 50 states. According to reports, as many as 25,000 National Guard soldiers will be guarding the city as preparations are made for the inauguration of Joe Biden as the 46th U.S. President.

President-elect Biden will be sworn in by Chief Justice John Roberts at noon ET on the Capitol's West Front, as is tradition. 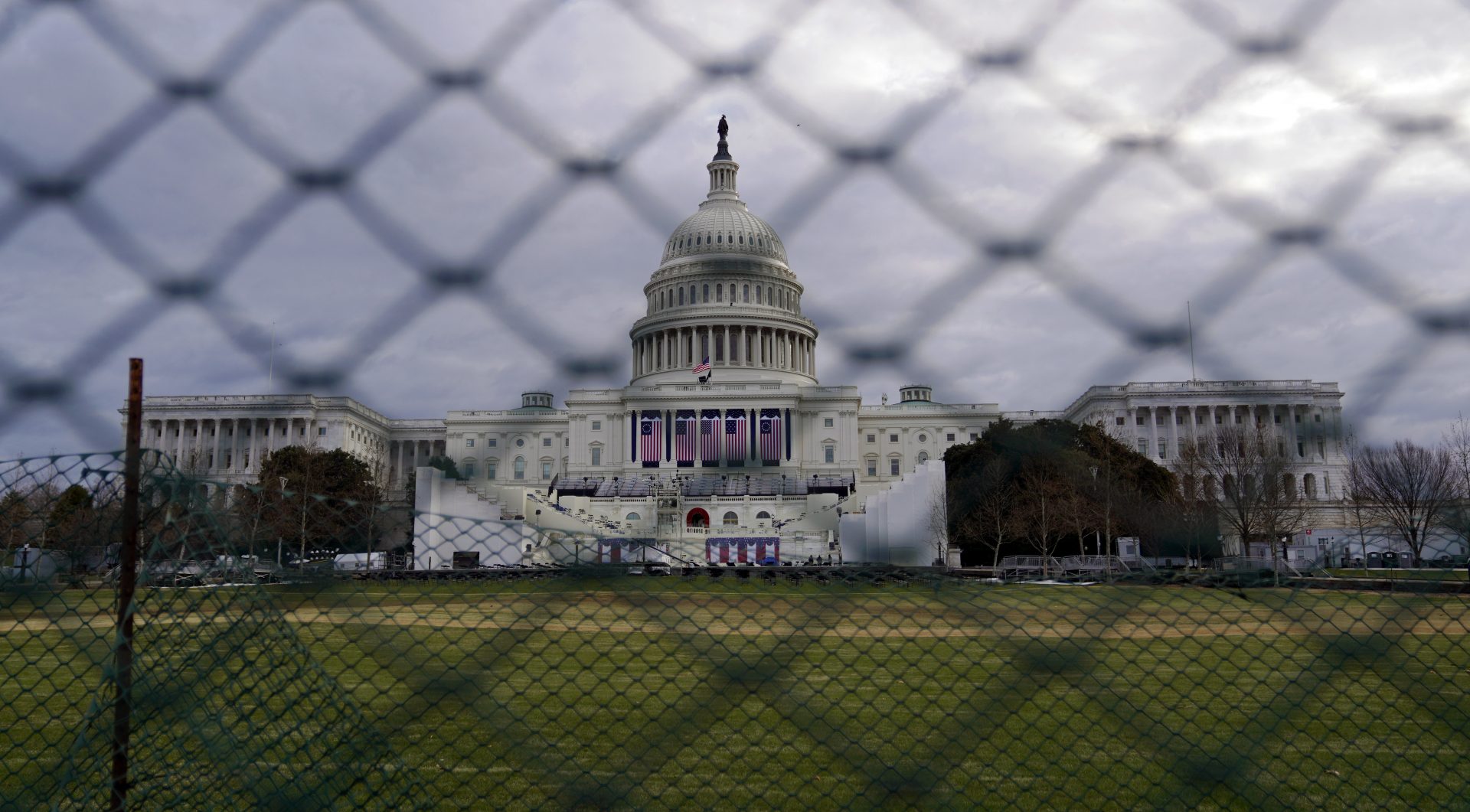 The U.S. Capitol is seen behind fences on January 17, 2021 in Washington, DC. After last week's riots at the U.S. Capitol Building, the FBI has warned of additional threats in the nation's capital and in all 50 states. According to reports, as many as 25,000 National Guard soldiers will be guarding the city as preparations are made for the inauguration of Joe Biden as the 46th U.S. President.

(Washington) — The inauguration of Joe Biden as the 46th president of the United States is going to look vastly different than those of his predecessors, given the ongoing coronavirus pandemic and heightened security concerns after a mob of pro-Trump extremists violently breached the U.S. Capitol two weeks ago.

There will be no throngs of people massed beneath a platform at the Capitol. Also absent will be President Trump, who’s skipping town early.

Here’s what you can expect on Wednesday. 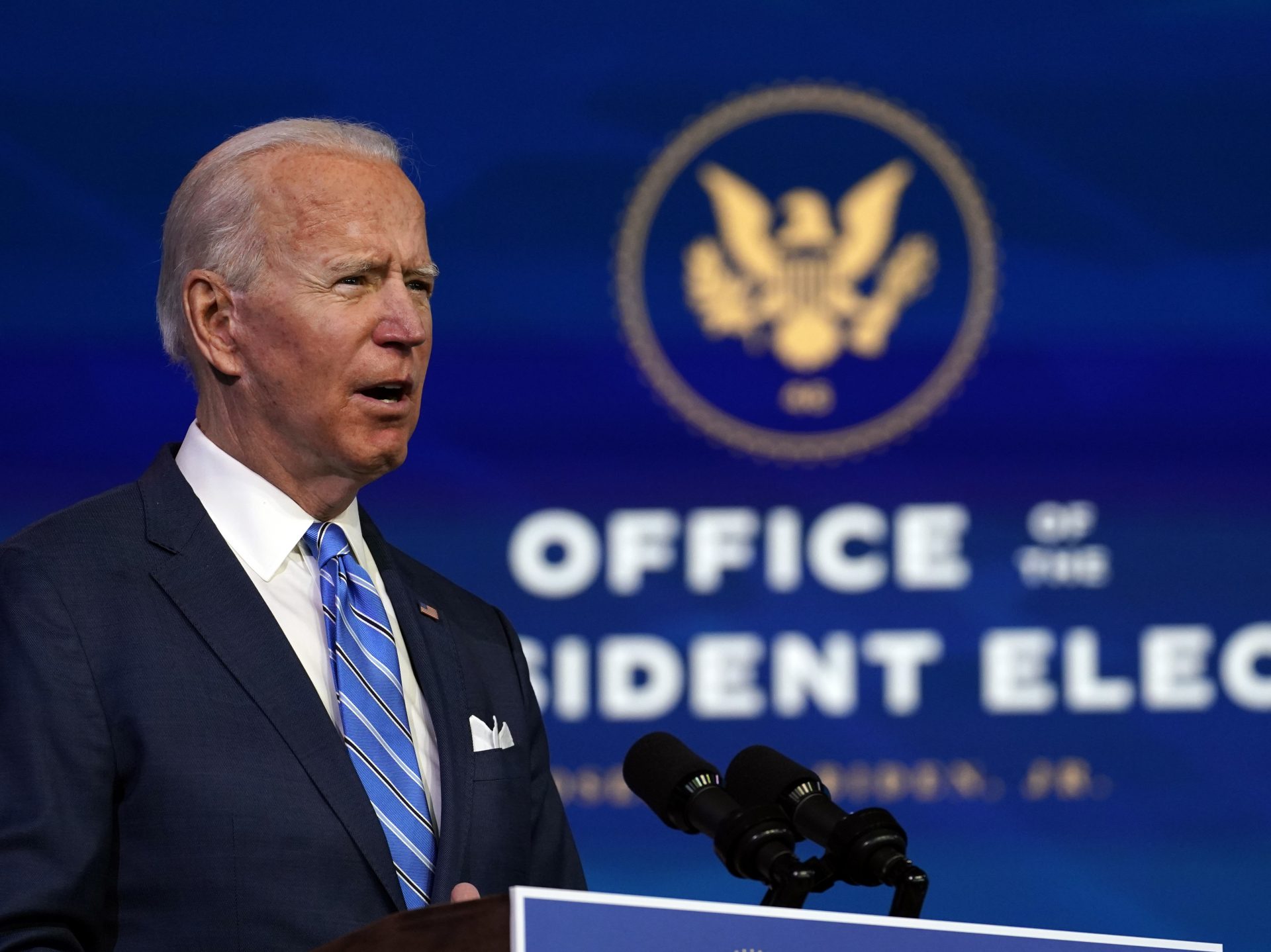 President-elect Joe Biden speaks about the COVID-19 pandemic during an event at The Queen theater, Thursday, Jan. 14, 2021, in Wilmington, Del.

What’s the lineup of events?

The inaugural ceremonies will begin with the national anthem and invocation around 11:30 a.m. ET. Vice President-elect Kamala Harris is expected to be sworn in by Supreme Court Justice Sonia Sotomayor shortly before noon.

President-elect Biden will then be sworn in by Chief Justice John Roberts at noon ET on the Capitol’s West Front, as is tradition.

It is anticipated there will be roughly 1,000 guests in attendance, the majority of whom will be members of Congress and their guests.

After he’s sworn in, Biden will deliver his inaugural address (see more on that below).

Biden will then move to the Capitol’s East Front for what’s known as Pass in Review, a longstanding tradition in which a new president assesses the military troops.

After that, Biden, Harris and former Presidents Barack Obama, George W. Bush and Bill Clinton, along with their spouses, will then travel to Arlington National Cemetery to lay a wreath at the Tomb of the Unknown Soldier.

Biden will then receive a military escort, with every branch of the military represented, from 15th Street to the White House before an evening of virtual activities.

What can we expect from Biden’s address?

The inaugural address gives a new president a chance to lay out an agenda and vision with all Americans (and the world) watching.

Some of the best-known remarks from past presidents have been uttered during such an address, including former President John F. Kennedy’s famous line: “Ask not what your country can do for you, ask what you can do for your country.”

While the details of Biden’s speech are being kept tightly under wraps, his inaugural team said the address will lay out his vision to “defeat the pandemic, build back better, and unify and heal the nation.”

As a presidential candidate, Biden talked at length about the campaign being a “battle for the soul of America.” It’s likely he’ll draw on that theme as he attempts to offer a message of healing to a nation bitterly divided by politics and in the midst of a pandemic that has cost the lives of nearly 400,000 Americans.

In recent days, Biden has detailed a huge legislative package to deal with the pandemic and its economic fallout, and outlined his plans to accelerate vaccinations. His team has also ticked through executive actions he plans to take after he’s sworn in. 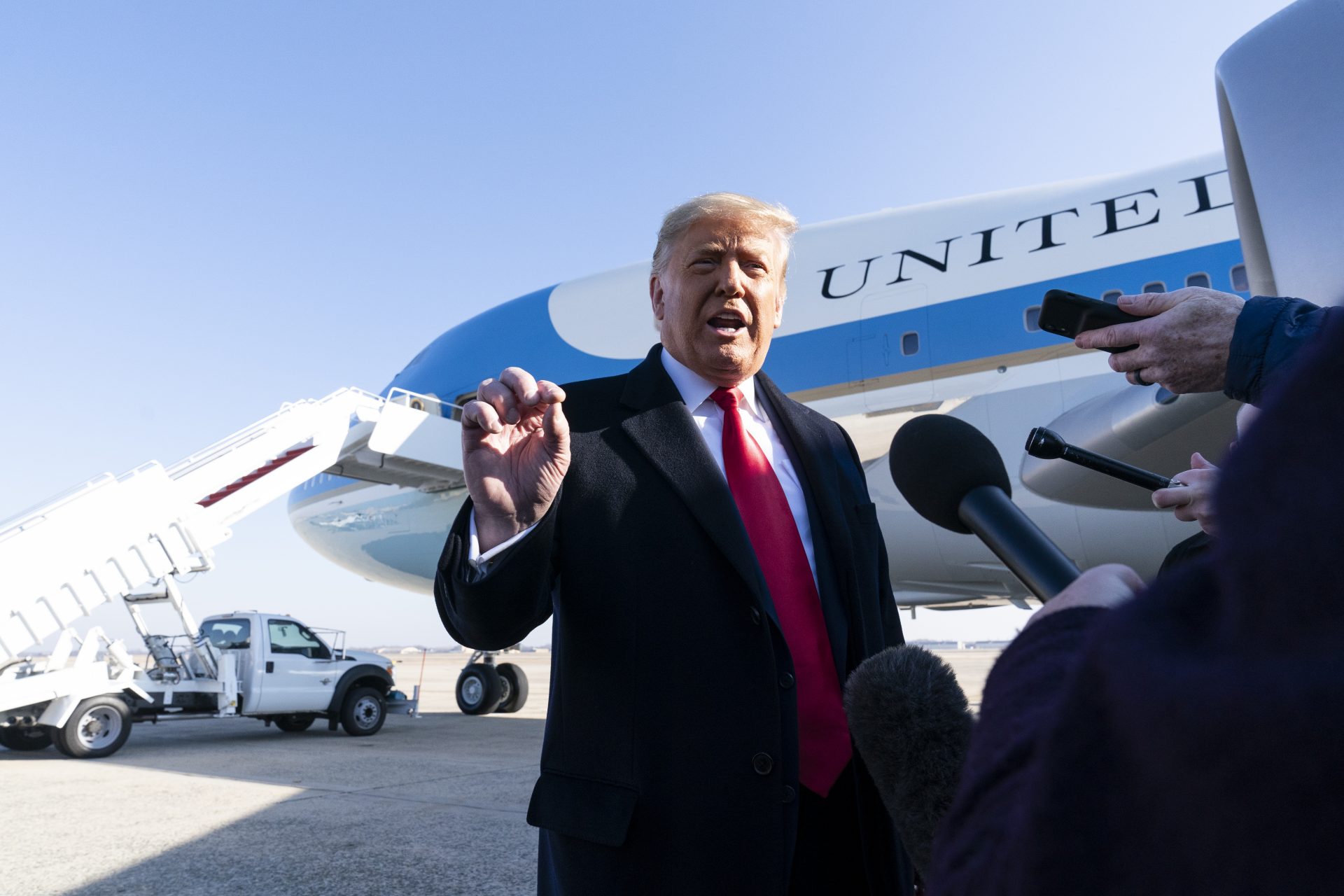 Trump won’t be there?

No. Trump, who was impeached by the House of Representatives last week for inciting his supporters to storm the Capitol while lawmakers worked to certify Biden’s election victory, is breaking with 150 years of tradition by not joining Biden at the event. It’s customary for an outgoing president and other former presidents to sit behind a new president, symbolizing the peaceful transfer of power.

Biden called Trump’s decision not to attend “one of the few things he and I have ever agreed on.”

Trump will leave the White House on Wednesday morning with a departure ceremony at Joint Base Andrews, on his way to his Mar-a-Lago resort in Florida.

Vice President Pence will attend the inauguration, however, as will former presidents Bush, Clinton and Obama.

Jan. 20 comes two weeks to the day after the Capitol was breached and ransacked by a pro-Trump mob, and as such, the events will have the largest security presence of any inauguration in U.S. history.

Up to 25,000 National Guard troops will be in place by Wednesday in response to security concerns. That’s five times the number of U.S. service members currently stationed in Iraq and Afghanistan.

The National Mall is closed to the public and the area surrounding the Capitol has been blocked off. Vast stretches of downtown Washington, D.C., are barricaded and off-limits.

D.C. Mayor Muriel Bowser extended the city’s public emergency following the Jan. 6 incidents through Jan. 21, out of concerns there could be additional riots.

The FBI has also warned there could be violent protests in all 50 states ahead of Biden’s inauguration. Statehouses have erected barricades and fencing and some states have increased law enforcement and activated National Guard troops.

Despite security concerns, Biden and Harris have remained determined to take the oath of office outside, on the West Front.

“I think we cannot yield to those who would try and make us afraid of who we are,” Harris told NPR in an interview last week.

How else will Wednesday differ from past inaugurations?

For one thing, the size. The Joint Congressional Committee on Inaugural Ceremonies would normally offer 200,000 tickets for the ceremonies at the Capitol, along with bundles of tickets for members of Congress to share with constituents.

But because of the coronavirus pandemic, no tickets are being offered to the public and members of Congress are only able to have one guest join them. In fact, the Biden transition team has been urging supporters to stay home.

Instead, the event will be live streamed by the Presidential Inaugural Committee.

For another thing, the pageantry surrounding the inauguration will look a lot different this year, to accommodate public health and security concerns. In essence, the pomp has been stripped down, preserving the simpler elements of the transfer of power.

A member of the Virginia National Guard stands outside the razor wire fencing surrounding the U.S. Capitol on Friday. Up to 25,000 troops are expected by Inauguration Day.

So…does that mean no parade?

That’s right, there won’t be the traditional public parade from the Capitol to the White House this year.

Instead, there will be a virtual parade entitled “Parade Across America,” which the Biden inaugural team says will feature “diverse, dynamic performances in communities across the country” and will pay “homage to America’s heroes on the front lines of the pandemic.”

Democrats have had success recently in reimagining traditional political moments as virtual events. During the summer convention, Democrats unveiled a highly produced nominating roll call that was widely praised for its creativity and inclusion.

Yes, no inaugural balls this year. Instead, there will be a TV special Wednesday night hosted by film star Tom Hanks.

The 90-minute program is called “Celebrating America” and will feature musical acts and remarks from both Biden and Harris.

What about musical guests?

Yes. Pop star Lady Gaga will sing the national anthem, and Jennifer Lopez, who started 2020 performing at the Super Bowl, will also perform a musical number.

Can the Senate try an ex-president?