The state Capitol was on high alert after a report indicated armed groups were planning to gather at state capitols.

(Harrisburg) — Police and Pennsylvania Army National Guard soldiers made their presence known Sunday at the state Capitol, even as protesters did not.

The show of force highlights the tensions of a country on high alert 11 days after insurrectionists, incited by outgoing President Donald Trump, stormed the U.S. Capitol, interrupting the electoral college certification of President-elect Joe Biden’s win.

The law enforcement presence followed a Federal Bureau of Investigation warning indicating that armed groups planned to gather at state capitols ahead of Biden’s Jan. 20 inauguration.

In the days after the Washington, D.C. insurrection that left five dead, police in Harrisburg added orange barriers around the Capitol and increased their visible presence inside. 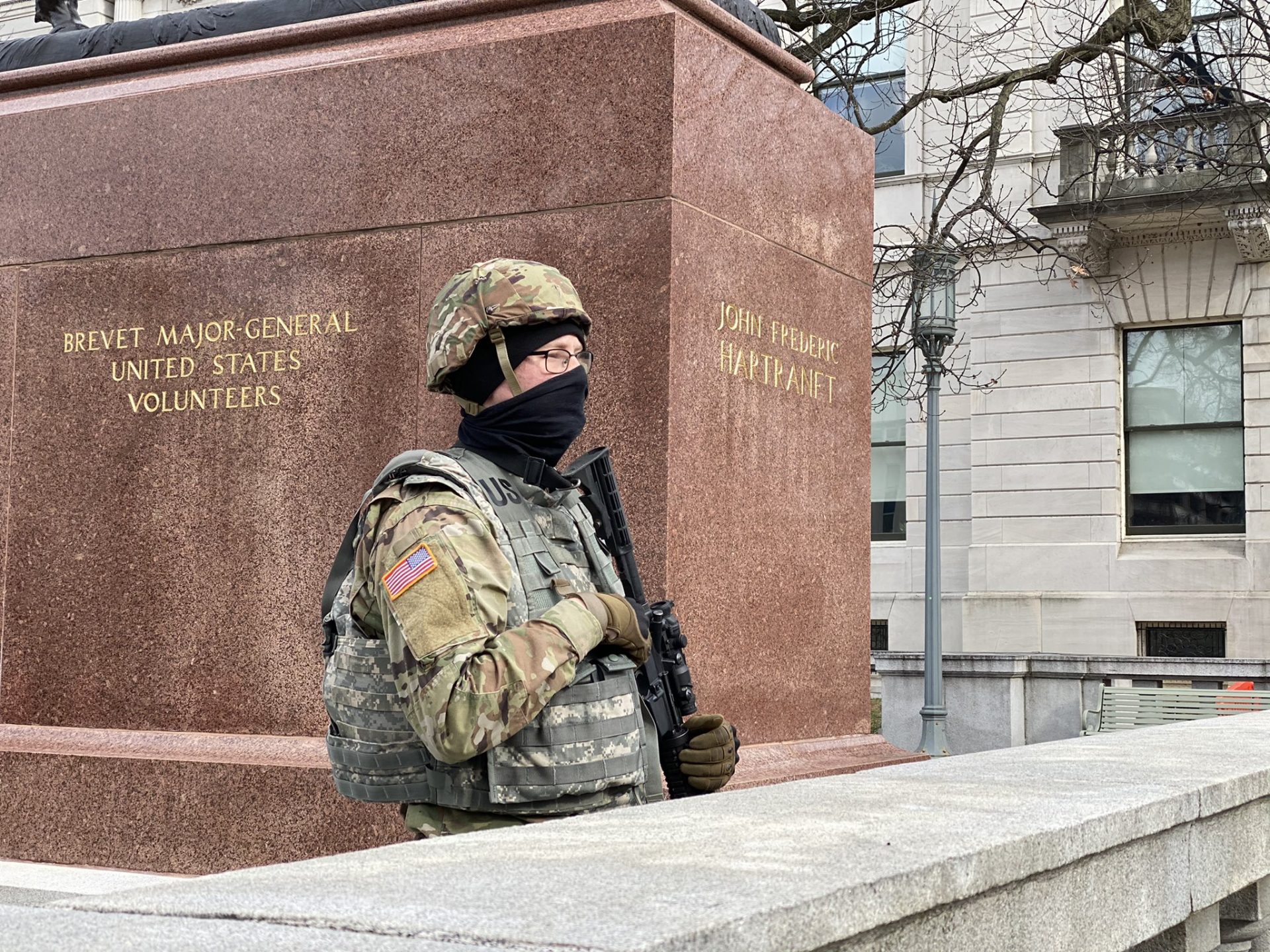 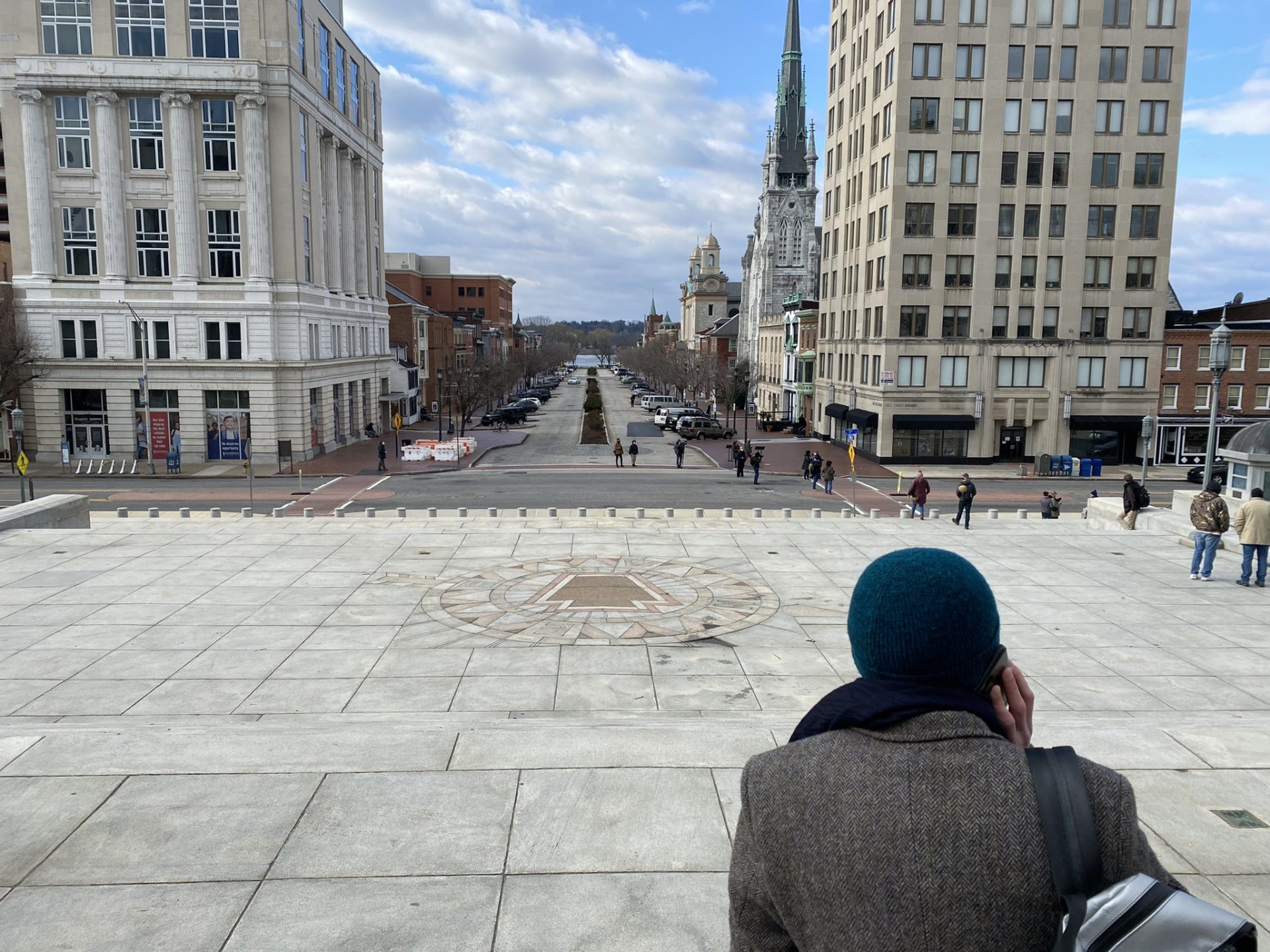 Journalists and police monitor the Pennsylvania State Capitol for possible protests. The scene was quiet as of 11 a.m. Sunday, Jan. 17, 2021. 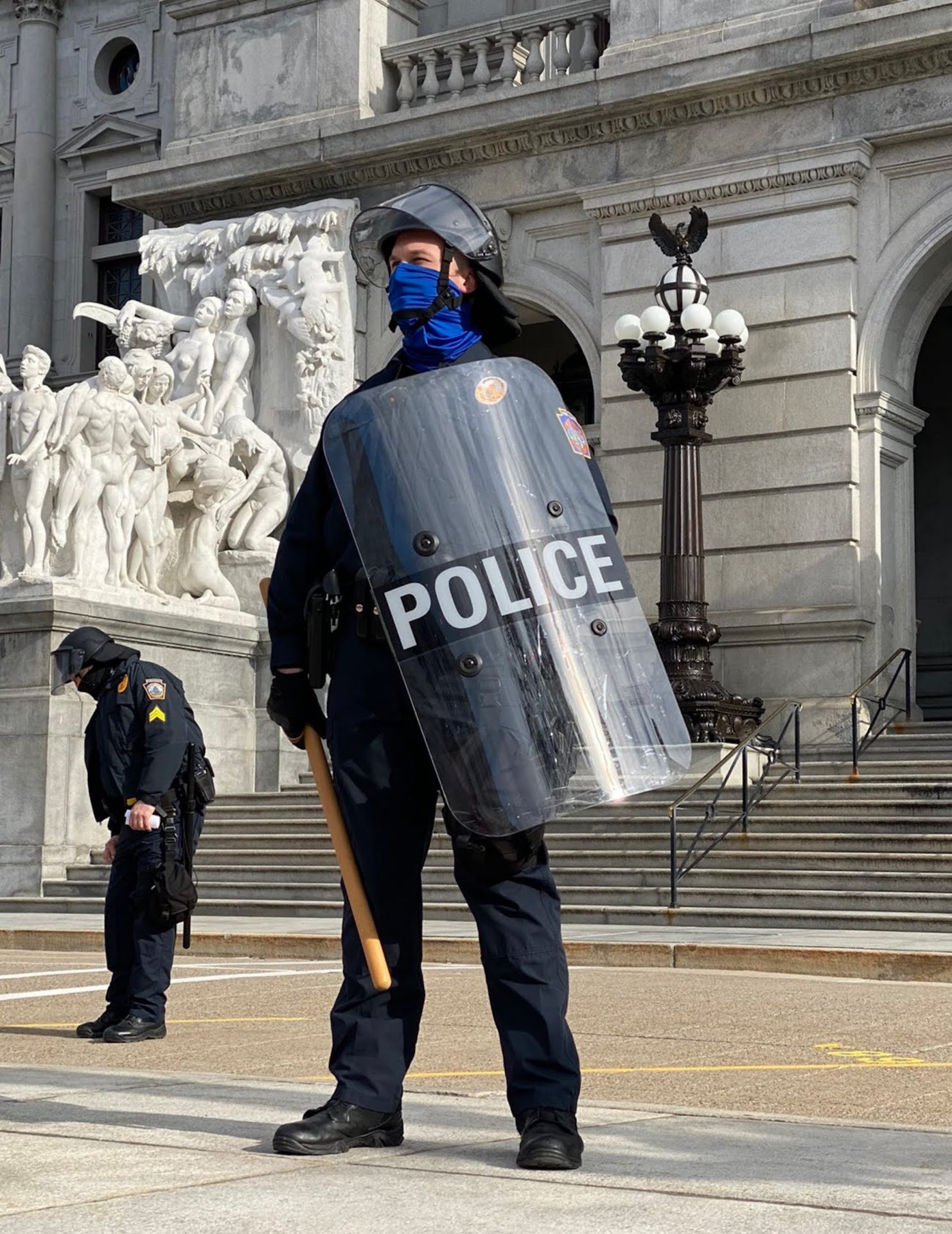 After hearing that an armed gathering was possible Sunday, police made it clear that they were prepared. Officers in riot gear stood in a line at the building’s west entrance. A one-block area around the Capitol was closed off to vehicle traffic, and Pennsylvania State Police rode horses through the streets. Harrisburg Police drove patrol vehicles around the area.

Friday, Pennsylvania Gov. Tom Wolf announced he’d activated 450 Pennsylvania National Guard soldiers to protect the Capitol. Sunday, the Guard used armored humvees to block off streets around the capitol. Soldiers were positioned behind barricaded entrance points, rifles in hands. Soldiers and police patrolled the premises on foot. A police helicopter, as well as a drone, surveilled the crowd.

The crowd was the main thing that was missing.

As of 11 a.m., a single protester wearing an “Election Fraud 2020” shirt stood at the base of the capitol stairs, where he took turns being interviewed by national, international, regional and local journalists looking for someone—anyone—to talk to.

To be clear, his shirt’s slogan referred to something that didn’t happen. County, state and federal judges and public officials of both political parties, and election experts, have concluded the 2020 election was free and fair. However, outgoing President Trump repeatedly lied to his supporters, saying there was election fraud. His 70-minute speech in Washington, D.C. prior to the Capitol insurrection repeated this lie and called on supporters to “fight like hell.”

Alex from Hershey, wearing a ‘Fraud 2020’ shirt, might be the only person I’d classify as a ‘protester’ that I have seen so far. @SamDunklau talked with him. pic.twitter.com/TYe8WGZEPS

A few people critical of Trump showed up as well. When political activist Gene Stilp arrived with a prop that ceremonially tore down a likeness of the outgoing president, he found a full-court press befitting a governor.

The overwhelming law enforcement response has a deterrent effect, said Troy Thompson, spokesman for the department that oversees Capitol Police. He said it’s a reasonable show of force given the violence that happened in Washington, D.C.

“Any time that you have an event that happens on a national level like what happened on January 6th, you understand that you could have that at our own state Capitol,” Thompson said. 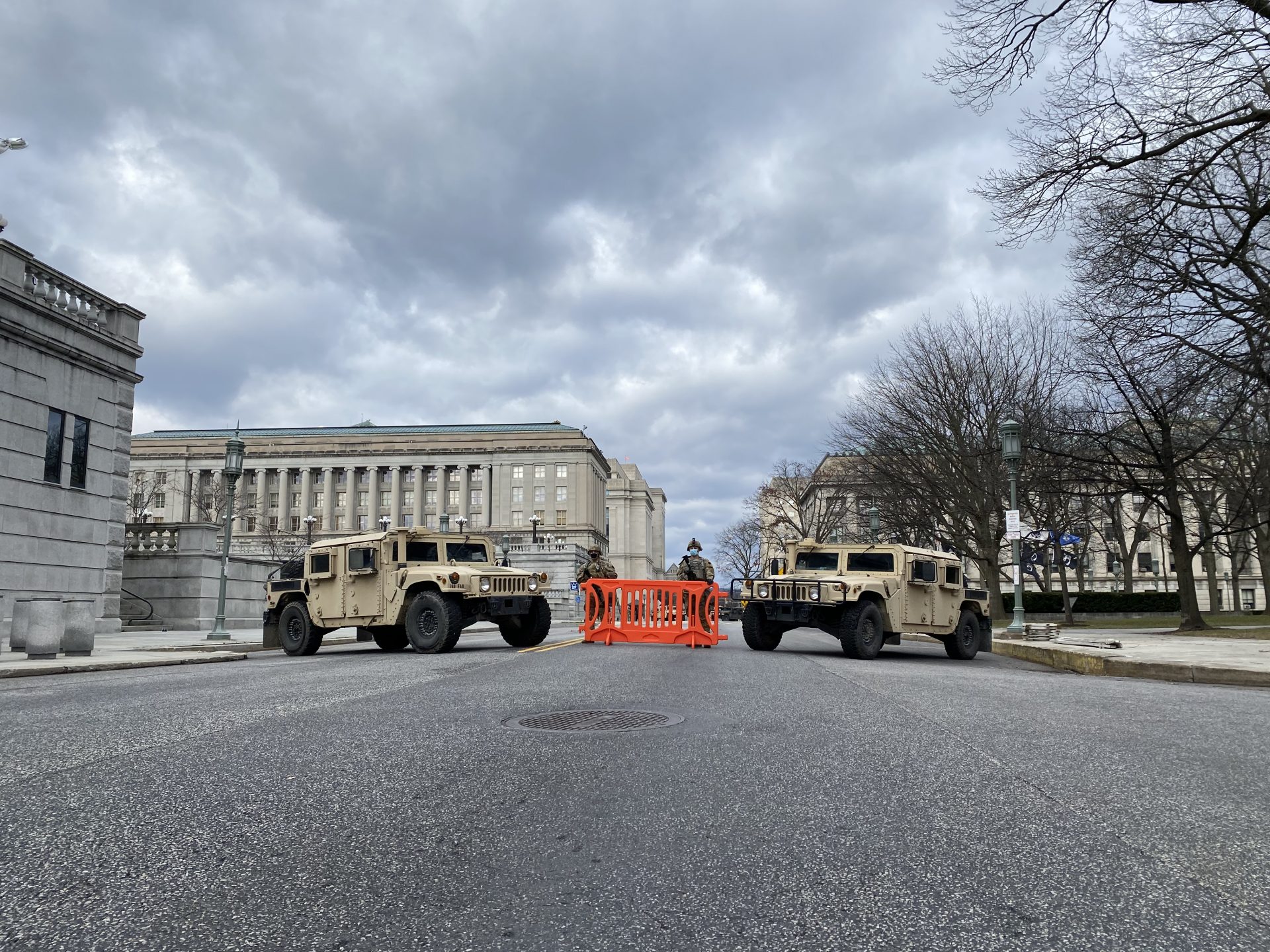 Two armored humvees are parked on a street near the Pa. state Capitol Sunday Jan. 17, 2021.

Law enforcement plans to maintain “increased visibility” over the next several days, Thompson said. He declined to say how many law enforcement officers were at the Capitol, and how many would be there through Wednesday.

“We’ll base it on the intelligence we receive,” Thompson said. “We monitor situations closely.”

Thompson said only “a handful, if that” of protesters showed up Sunday, and no one was arrested.

He declined to estimate how much the security cost the state, saying it will take time to come up with that number. In addition to Capitol Police, Pennsylvania State Police and the Pennsylvania Army National Guard, Harrisburg and Dauphin County police and the state Attorney General’s office also contributed resources.

“We have a visible presence, and then we have a behind-the-scenes presence,” Tarkowski said.

He said some of those troopers, such as security analysts, are already working around the clock and are monitoring the situation.

He said state police will continue to serve in this role as needed.