In this Dec. 18, 2019, file photo, taken from video, Rep. Tom Rice, R-S.C., speaks as the House of Representatives debates the articles of impeachment against President Donald Trump at the Capitol in Washington. Rice was one of only 10 House Republican on Wednesday, Jan. 13, 2021 to join with Democrats in voting to impeach President Trump, a stunning reversal from his position just days earlier.

They don't cut a singular profile and come from a range of districts, from coast to coast, some representing places Trump won handily in 2020.

(Washington) — Ten Republicans crossed President Trump Wednesday and voted to impeach him for “incitement of insurrection.”

It was a historic vote and one that came exactly a week after a pro-Trump mob laid siege to the U.S. Capitol after attending a Trump rally on the Ellipse outside the White House. The Capitol was ransacked and occupied for hours, and, in the end, five Americans died and many others were injured as a result.

The 10 House members who voted to impeach Trump don’t cut a singular profile. They come from a range of districts, from coast to coast, some representing places Trump won handily in 2020, while others are in more moderate seats.

This vote could expose some of them to potential primary challenges from the right, as well as possible safety threats, but for all of them Trump had simply gone too far. Multiple House Republicans said threats toward them and their families were factors weighing on their decisions on whether to impeach this president.

Ten out of 211 Republicans in the House is hardly an overwhelmingly bipartisan vote, and clearly, most Republicans’ sympathies still lie with Trump — and his ardent base of followers. But the 10 represent something significant — the most members of a president’s party to vote for his impeachment in U.S. history.

Here they are in order of the most pro-Trump districts:

1. Rep. Liz Cheney, Wyoming at-large: Trump won Wyoming 70% to 27%, and she’s the third-ranking leader in the House. So for her to not just vote in favor of impeachment but issue a stinging rebuke is quite the step. Cheney was unequivocal in her statement, saying Trump “summoned this mob, assembled the mob, and lit the flame of this attack.” She called what Trump did the “greatest betrayal” of a U.S. president ever. 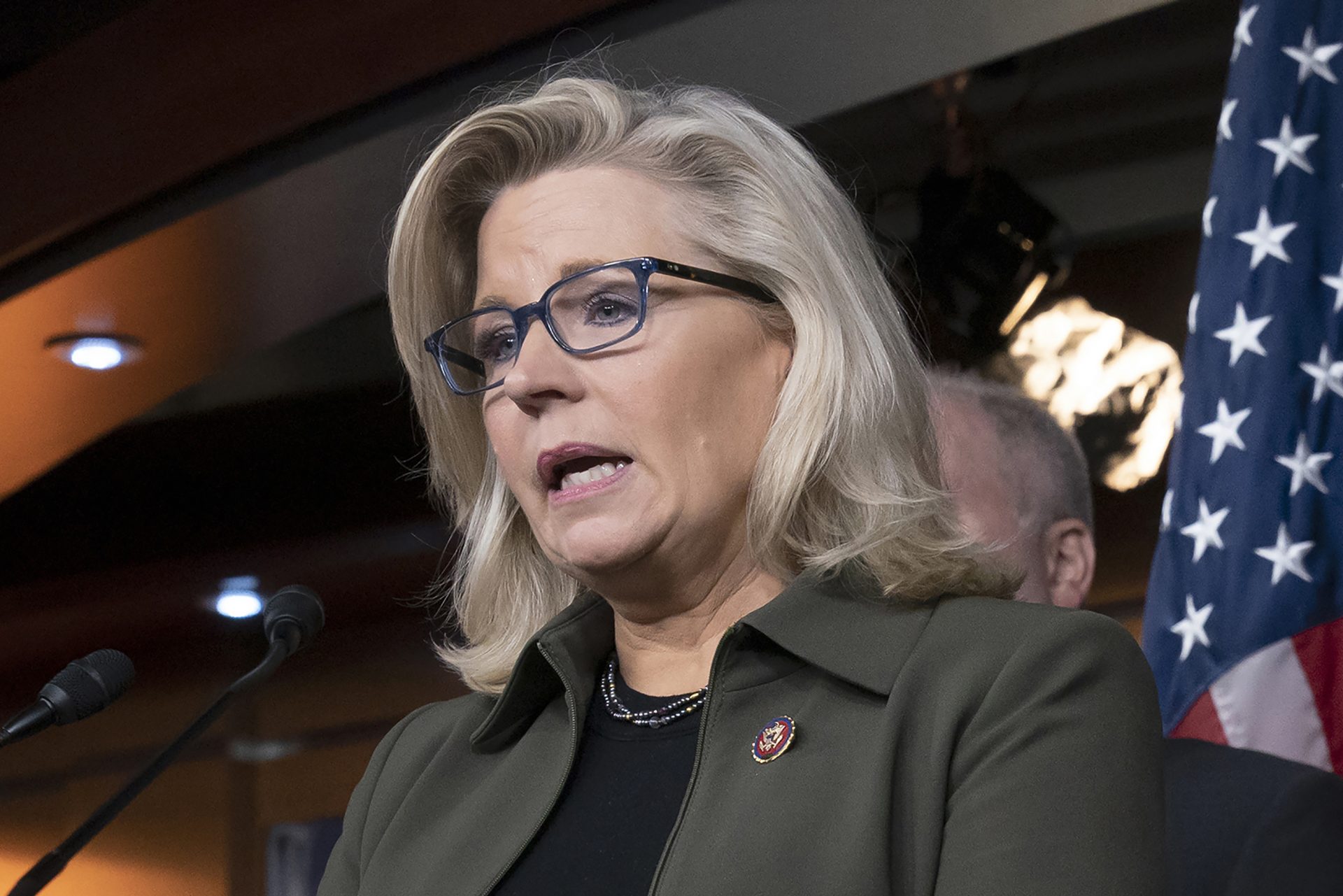 In this Dec. 17, 2019 file photo, Rep. Liz Cheney, R-Wyo., speaks with reporters at the Capitol in Washington.

2. Rep. Tom Rice, South Carolina’s 7th congressional district: This is one no one saw coming. The congressman, who has served since 2013, comes from a pretty pro-Trump district (Trump won it 59% to 40%), and there was no indication that he would do this beforehand. Even during his vote, Twitter was alight with speculation that Rice had cast the wrong vote. Turns out, he cast it exactly as he wanted to. Later Wednesday, Rice explained: “I have backed this President through thick and thin for four years. I campaigned for him and voted for him twice. But, this utter failure is inexcusable.”

I have backed this President through thick and thin for four years. I campaigned for him and voted for him twice. But, this utter failure is inexcusable.https://t.co/SCWylYEER0

3. Rep. Dan Newhouse, Washington’s 4th: Trump won this central Washington state district by a handy margin, 58% to 40%. But for Newhouse, who has served since 2015 and has not been a prominent member, it was clear — “The mob was inflamed by the language and misinformation of the President of the United States. … A vote against impeachment is a vote to validate unacceptable violence” and “to condone President Trump’s inaction.”

4. Rep. Adam Kinzinger, Illinois’ 16th: Kinzinger’s decision was probably the least surprising on this list. Despite coming from a district Trump won 57% to 41%, the Air Force veteran has been outspoken recently against Trump’s behavior. He said Trump “incited this insurrection” and “if these actions–the Article II branch inciting a deadly insurrection against the Article I branch–are not worthy of impeachment, then what is an impeachable offense?”

5. Rep. Anthony Gonzalez, Ohio’s 16th: Gonzalez, a former NFL wide receiver, is in his second term in Congress. Trump won his district by 15 points, but Gonzalez was unequivocal: Trump, he said, “helped organize and incite a mob that attacked the United States Congress in an attempt to prevent us from completing our solemn duties as prescribed by the Constitution.” He added that during the attack, Trump “abandoned his post … thus further endangering all present.”

6. Rep. Fred Upton, Michigan’s 6th: Upton has been in office since 1987. He comes from a district that is more moderate. Trump won it just 51% to 47%. He has good relationships with Democrats, including President-elect Biden, and even has #WearYourMask in his Twitter bio. Upton said he would have preferred a bipartisan censure that would interfere with the business of the next administration, “but,” he said, “it is time to say enough is enough.” He also cited Trump’s efforts “to impede the peaceful transfer of power from one President to the next.”

7. Rep. Jaime Herrera Beutler, Washington’s 3rd: Herrera Beutler was swept in with the Tea Party wave in 2010, but her district is a moderate one. Trump won it just 51% to 47%. Herrera Beutler gained prominence several years ago for giving birth to a child three months early, born without kidneys and a rare syndrome. Her daughter, Abigail, became the first to survive the often-fatal condition. The now-mother of three and congresswoman from southwest Washington state declared on the House floor of her vote in favor of impeachment: “I’m not choosing sides, I’m choosing truth.”

8. Rep. Peter Meijer, Michigan’s 3rd: Meijer is a freshman, who won election in this moderate district with 53% of the vote that was previously held by Justin Amash. Amash is the former Republican-turned-independent who voted in favor of Trump’s impeachment in 2019. Meijer, a West Point grad who served in Afghanistan is a social conservative in favor of restrictions on abortion rights and against restrictions on gun rights and religious freedoms. But he said Trump showed no “courage” and “betrayed millions with claims of a ‘stolen election.'” He added, “The one man who could have restored order, prevented the deaths of five Americans including a Capitol police officer, and avoided the desecration of our Capitol, shrank from leadership when our country needed it most.” 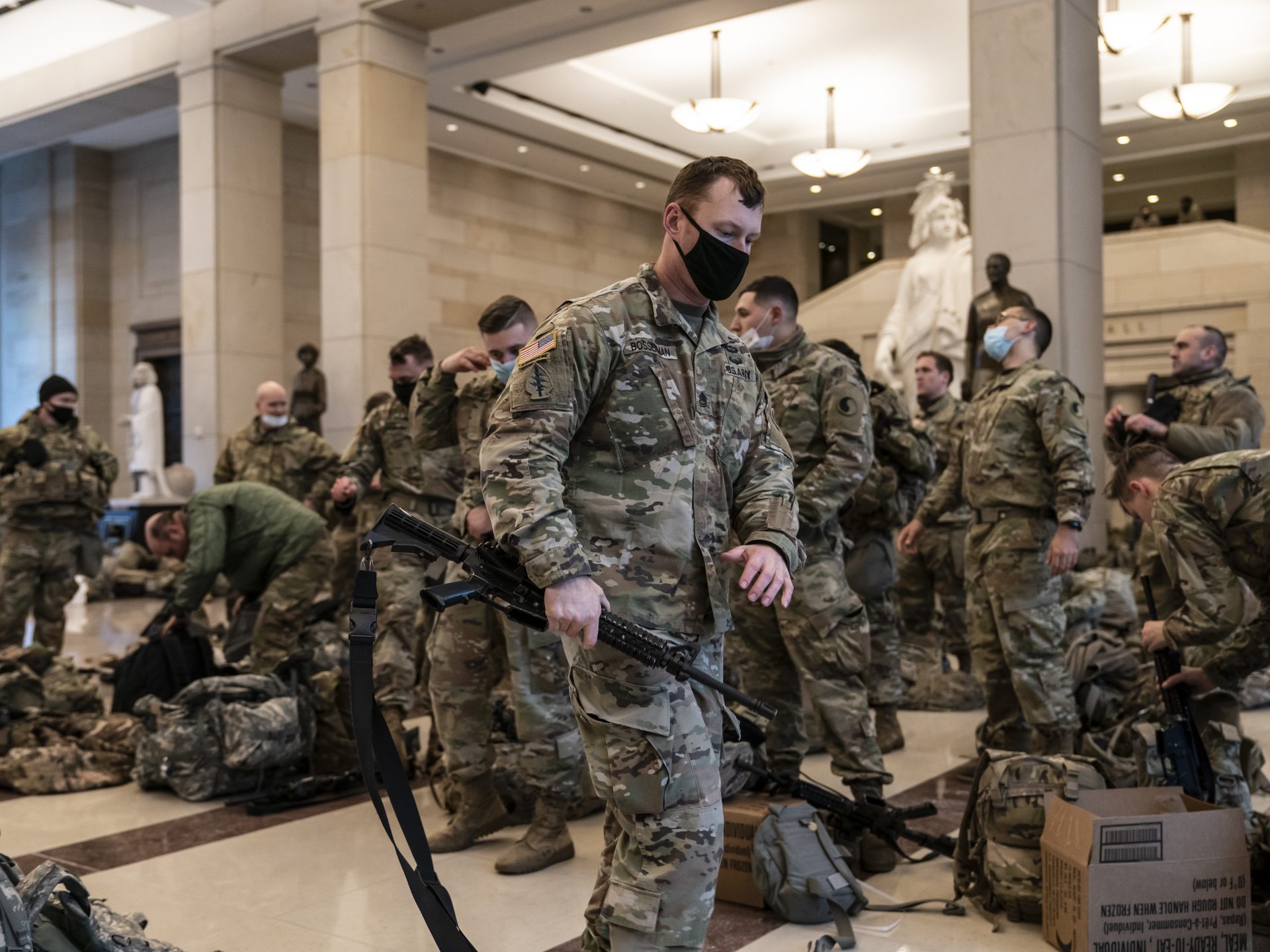 Hundreds of National Guard troops hold inside the Capitol Visitor’s Center to reinforce security at the Capitol in Washington on Wednesday. It comes a week after an insurrection at the Capitol and as the House of Representatives is pursuing an article of impeachment against President Trump.

9. Rep. John Katko, New York’s 24th: Katko is a moderate from an evenly divided moderate district. A former federal prosecutor, he said of Trump: “It cannot be ignored that President Trump encouraged this insurrection.” He also noted that as the riot was happening, Trump “refused to call it off, putting countless lives in danger.”

10. Rep. David Valadao, California’s 21st: The southern California congressman represents a majority-Latino district Biden won, 54% to 44%. Valadao won election to this seat in 2012 before losing it in 2018 and winning it back this past fall. He’s the rare case of a member of Congress who touts his willingness to work with the other party. Of his vote for impeachment, he said: “President Trump was, without question, a driving force in the catastrophic events that took place on January 6.” He added, “His inciting rhetoric was un-American, abhorrent, and absolutely an impeachable offense.”

Opening the door in the Senate

This time, there will be more. Some Republican senators have called on Trump to resign and even Senate Majority Leader Mitch McConnell said he is undecided at this point.

Trump’s impeachment won’t lead to his removal — even if he is convicted — because of the timeline. The Senate is adjourned until Jan. 19. The next day, Joe Biden will be sworn in as the 46th president. But there’s another penalty the Constitution allows for as a result of a Senate conviction that could be appealing to some Republican senators — banning Trump from holding “office” again.

While there is some debate as to the definition of “office” in the Constitution and whether that would apply to running for president or even Congress, that kind of public rebuke would send a strong message — that Republicans are ready to move on from Trumpism.

Some ambitious Republican senators have never been as on board the Trump train as the more feverish GOP members in the House and they might be open to convicting Trump. But their ambition cuts two ways — on the one hand, voting to ban Trump opens a lane to carry the Republican mantle in 2024 and be the party’s new standard bearer; but, on the other, it has the potential to alienate many of the 74 million who voted for Trump, and whose votes they need.

It’s a longshot that Trump would ultimately be convicted, because 17 Republicans would need to join Democrats to get the two-thirds majority needed for a conviction. But it’s growing clearer that a majority of the Senate will vote to convict him, reflecting the number of Americans who are in favor of impeachment, have disapproved of the job Trump has done and the results of the 2020 presidential election.