Additional officers are posted inside and outside of the complex, and barriers have been erected in recent days. 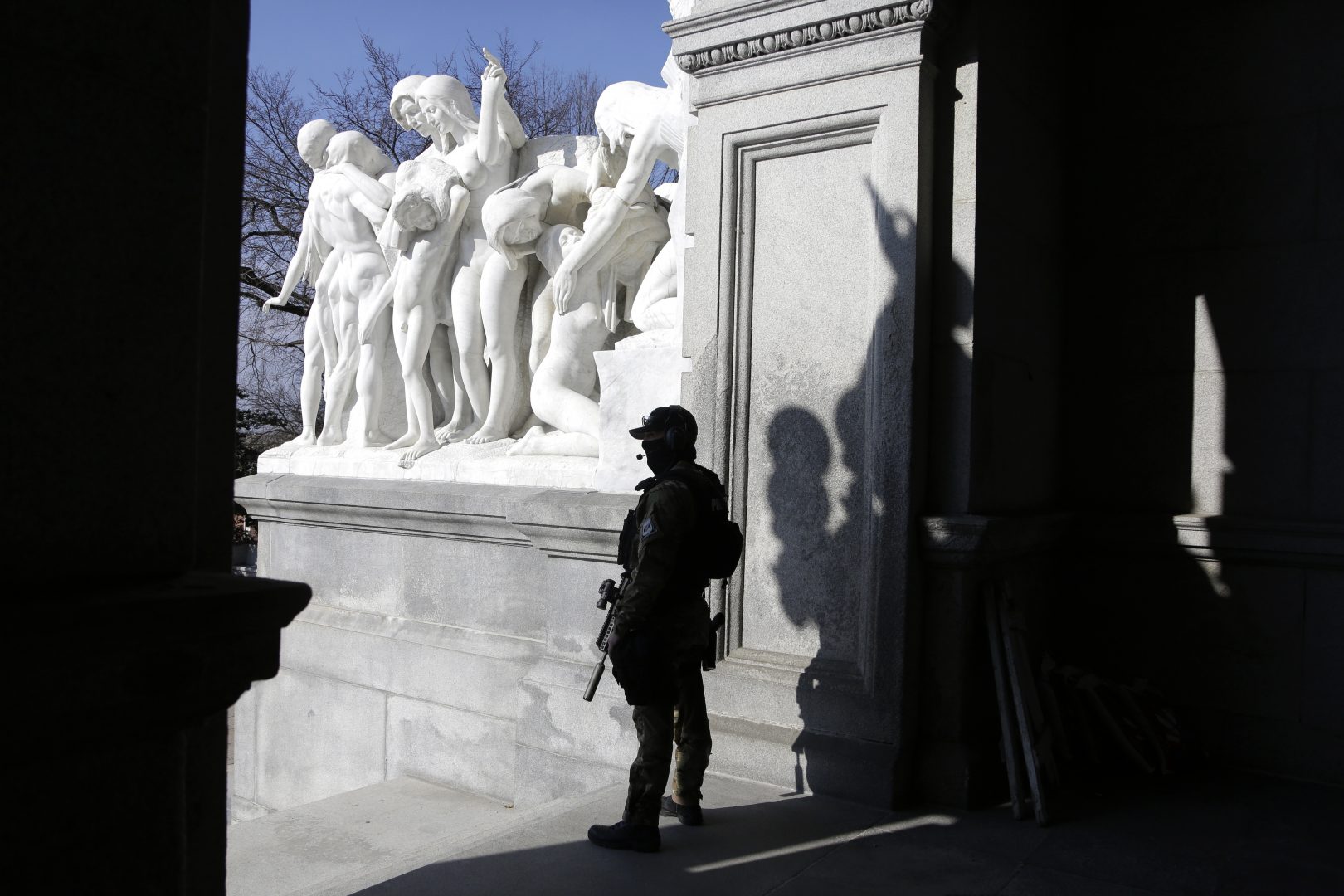 (Harrisburg) — A few hundred members of the Pennsylvania National Guard will be brought in to protect the state Capitol and other potential targets of unrest and violence in the week ahead, authorities said Thursday.

Law enforcement leaders said plans to handle any potential violence toward the Capitol include blocking off streets in Harrisburg and using helicopters, drones and horse-mounted officers.

“The Pennsylvania Capitol Police has the full support of Pennsylvania State Police and access to the significant resources we bring to bear,” state police Lt. Col. Scott Price said during an online briefing.

The focus of their plans is on Sunday, when armed marches to statehouses around the country by supporters of President Donald Trump could occur. Police said they know of no specific threat to the Pennsylvania Capitol but are taking precautions because of what they called generalized intelligence.

Harrisburg Police Commissioner Tom Carter said officers will not stand in the way of peaceful protestors.

“However, we are not looking to see or to get into any physical confrontation with anybody,” he said. “We understand that everybody has grievances. There’s a way to put those grievances out there.”

Harrisburg’s McCormick Riverfront and Madeline L. Olewine Memorial libraries will be closed Saturday as a “precaution due to heightened security concerns” and may reopen later in the week, according to a statement from the Dauphin County Library System released Thursday.

Gov. Tom Wolf on Thursday ordered the Pennsylvania Capitol closed for two days next week around the swearing-in of three statewide officials and the inauguration of President-elect Joe Biden.

The complex is already closed to the general public because of the coronavirus pandemic, and most Capitol employees under Wolf’s jurisdiction currently work remotely. But the new order advises employees who report to work in person to take off Tuesday and Wednesday. Monday is a holiday.

“While we are not aware of any specific threats at this time, we want to act with an abundance of caution to keep employees safe,” Wolf’s Office of Administration said on its website. 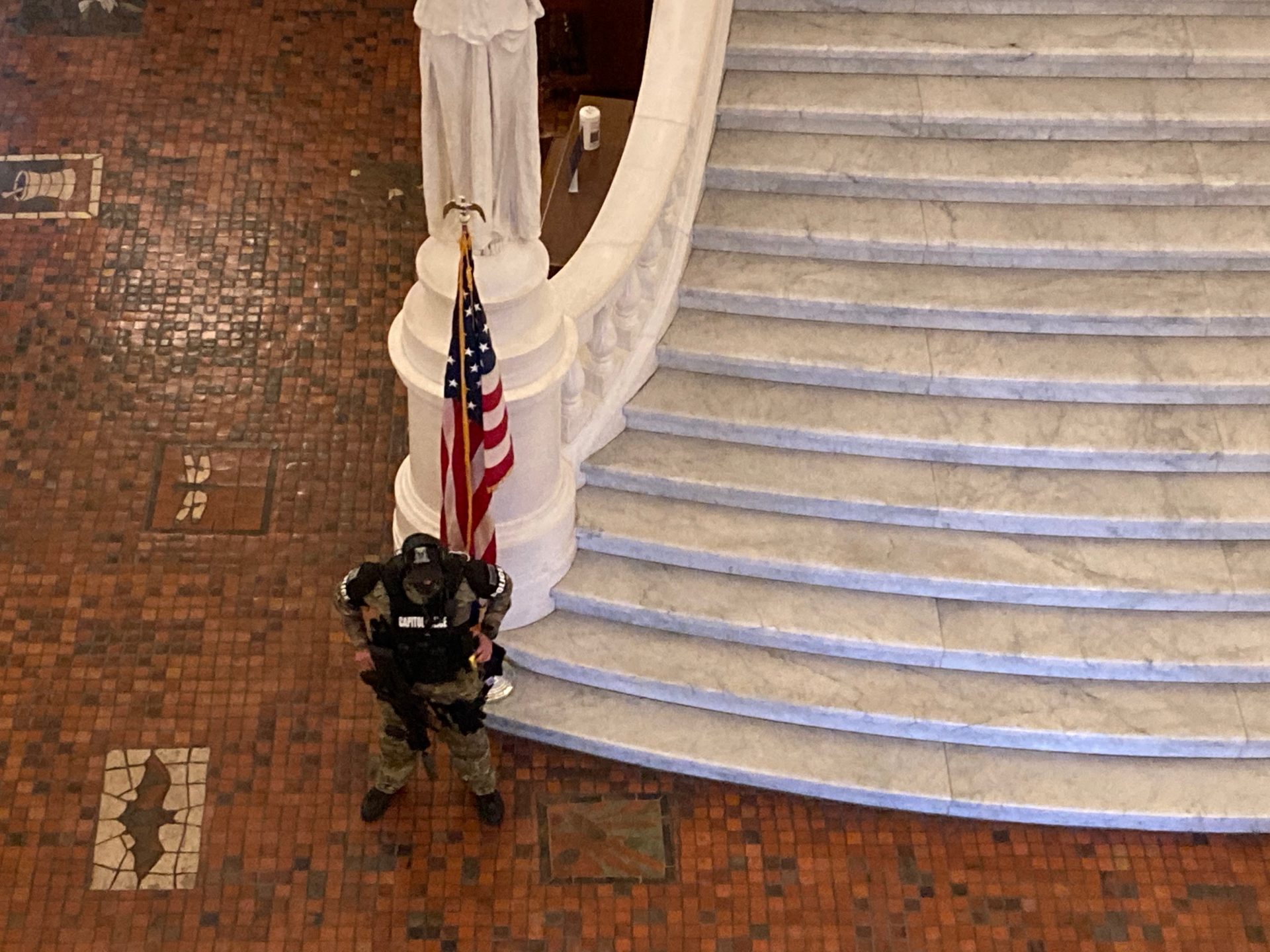 Meanwhile, the state Senate said its offices will close for five days, Saturday through Wednesday, a decision made in consultation with law enforcement.

In recent days, Capitol Police have tried to become more visible inside and outside of the building, and have erected orange plastic barriers, in light of last week’s violent siege of the U.S. Capitol.

State capitols around the United States have heightened security after the attack in Washington. The FBI has warned there are calls for armed protests at statehouses and in Washington on Sunday and ahead of Biden’s inauguration.

The thigh-high orange plastic barriers are keeping pedestrians away from walkways and side doors. Two heavily armed officers were stationed outside Thursday, and another was patrolling hallways in the largely vacant Main Capitol.

Shapiro said his agents and prosecutors were working with federal authorities on the investigation into the U.S. Capitol riot.

“We know the difference between protests and violence,” Shapiro said Thursday. “Anyone who attempts to be violent, break or destroy state property, or bring harm or destruction to the Harrisburg community — or any community across Pennsylvania — will be held accountable.”

In Philadelphia, officials added security personnel to protect historical and city-owned buildings, and the district attorney warned that those who intend to target the Capitol would expose themselves to state charges beyond the reach of any presidential pardon.

“We ain’t having Nazis in Philly. It’s not happening. I don’t care what flavor of Nazi you think you are,” Krasner said.

Why didn't the FBI and DHS produce a threat report ahead of the Capitol insurrection?