Pa. state Rep. Doug Mastriano, left, seen at the protest outside of the Capitol by Rick Saccone. right.

A review of the state senator’s campaign finance records shows that his committee paid $3,354 to Wolf’s Bus Lines in three installments.

(Philadelphia) — Campaign finance records show that State Sen. Doug Mastriano’s campaign spent thousands of dollars on charter buses ahead of the Washington D.C. rally that ended with supporters of President Donald Trump violently storming the halls of Congress last week during an insurrection.

Mastriano (R-Franklin), rumored to be a future GOP gubernatorial candidate, has faced calls to resign for attending the rally. A review of the state senator’s campaign finance records shows that his committee paid $3,354 to Wolf’s Bus Lines in three installments for “bus reservations” about six days before Trump’s “Save America” rally.

The same week the payments were made, Mastriano posted an event on Facebook offering bus rides to D.C. on Jan. 6 –– charging attendees $25 dollars for an adult and $10 for children.

State Sen. Vincent Hughes (D-Philadelphia) reiterated a call for his Republican colleague to be thrown out of the legislature.

“He needs to be expelled,” he said. “This was not a bus trip to the casino. This was a trip organized to overthrow the government.”

Supporters of US President Donald Trump protest inside the US Capitol on January 6, 2021, in Washington, DC. – Demonstrators breeched security and entered the Capitol as Congress debated the a 2020 presidential election Electoral Vote Certification.

In the aftermath of the insurrection, Mastriano said he took no part in a mob that rushed Capitol Hill, and he disavowed the violence. The action resulted in five deaths, including a police officer.

But in the days leading up to the event, the state senator repeatedly stoked unfounded voter fraud claims.

Robert Maguire, a research director for campaign finance watchdog Citizens for Responsibility and Ethics in Washington, echoed concerns about Mastriano. He says responsibility for the attack on Congress goes far beyond Trump.

“He was helped at every step along the way by political allies at the state and federal level who amplified his baseless conspiracy theories and actively helped rally supporters to the Capitol after weeks of whipping them into a violent frenzy over lies about a stolen election,” he said. “Every single one of these officials bears responsibility for the damage they have done.”

Mastriano was not the only Pennsylvania GOP official linked to orchestrating travel to D.C. last week.  A review of dozens of social media pages and event listings show that at least ten county level GOP chapters encouraged or directly facilitated trips to the capitol.

The Cumberland County Republican Committee scheduled buses to transport Trump supporters to D.C. the morning of Jan. 6. In a Facebook post from Jan. 3, the committee exhorted its members to “continue to rally for our President and stop the steal!!”

On Monday, the committee issued its first statement on Facebook addressing the violence at the Capitol. Leaders condemned it — with caveats.

“While we denounce the violence that occurred last week, we voice our support for the thousands of PEACEFUL protestors, including two busloads of protestors from Cumberland County, who went to Washington, D.C. last Wednesday, on December 12, 2020, and on November 14, 2020, to raise awareness of the widespread fraud that occurred during the 2020 election,” the committee wrote.

But in a statement issued after the violent incident, the group said it removed its sponsorship ahead of the event “due in part to a concern over rumors of possible violence.”

The group says the trip was “handed over to three private citizens from Berks and Chester Counties.”

At least one Pennsylvania business owner has seen fallout from his direct involvement in the Capitol chaos. Jim Worthington, a Trump donor and former electoral college delegate who owns the sprawling Newtown Athletic Club in Bucks County, chartered three buses to the Capitol through his group The People 4 Trump.

In a Facebook post several days later, Worthington bemoaned social media’s “horrifyingly negative” rhetoric about people who traveled to D.C. and said none of the riders on his three buses were “near the Capitol entrance when the rioting took place.”

According to Patch.com, at least eight of Newtown Athletic Club’s associates — mainly schools and other businesses that had used the club for health programming — have now cut ties. A petition urging others to follow suit has more than 6,000 signatures.

At least thirteen Pennsylvania residents have been arrested in connection with the Capitol riots. One, 69 year-old Terry Brown, was the only from the state caught inside the Capitol Building. He told Keystone Crossroads last week he stood by his actions.

“The doors were open,” he said. 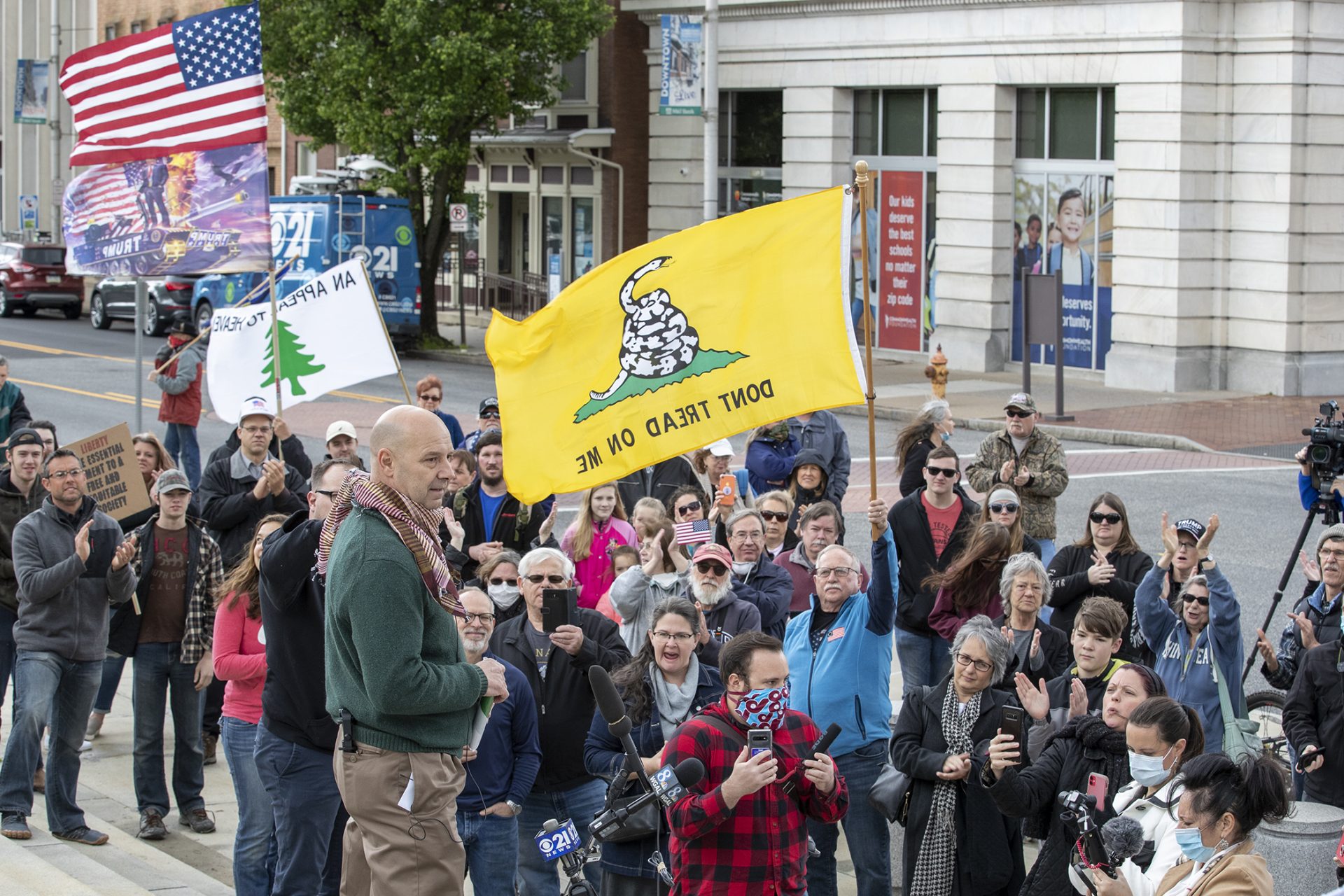 State Sen. Doug Mastriano (R-Franklin) speaks at a May 11, 2020, rally outside the state capitol in Harrisburg. Mastriano, in green sweater, called for the resignation of Pennsylvania Health Secretary Rachel Levine.

Mastriano’s actions leading up to the insurrection have added to the political division in Harrisburg.

The retired Army colonel has disseminated clearly false allegations of voter fraud and promoted conspiracy theorists, like lawyer Sidney Powell and QAnon supporting cartoonist Ben Garrison. He garnered national attention by helping to organize a controversial hearing in Gettysburg that cast doubt on the state’s election integrity and met with Trump at the White House.

He has also falsely pushed the notion that the lack of hard evidence for mass vote rigging was due to the media and others’ failure to investigate claims. He made similar arguments once again this week to the right-wing outlet Newsmax, repeating a long-debunked claim that the state recorded more votes than voters.

In a YouTube interview on January 4, the senator appealed to God to intercede, comparing Democratic Party supporters behavior to Bolshevik revolutionaries’ 1917 overthrow of the Russian Czardom.

“We have a side not interested in truth or facts but advancing their political interests over what’s right for the Republic,” he said. “Where does it stop? And ultimately when they get into power, you see the results of that.”

Two days later, Mastriano was in D.C. with a group of Trump supporters before many violently breached the halls of the Congress.

Special election to fill state House vacancy set for May 18