The network has yet to acknowledge how the heated rhetoric radiating from its shows and stars may have helped inspired the pro-Trump rampage.

(Washington) — Among some prominent Republicans, inside social media companies and in other major institutions throughout society, a reckoning has erupted following the violent attack on the U.S. Capitol last Wednesday.

Not at the Fox News Channel, however. On the contrary, the network that has helped shape conservative politics in the U.S. for more than two decades has yet to acknowledge how the heated rhetoric radiating from its shows and stars may have helped inspired the pro-Trump rampage.

Comments from prominent Fox News hosts and guests had helped stoke the MAGA mob’s fury for the two months following the November elections. In December, Fox Business host Lou Dobbs said opponents of Trump throughout the government had committed “treason,” and later suggested that any Republican who upheld Biden’s victory in the Electoral College may be “criminal.”

Three days before the protest that turned into the riot, Fox News host Mark Levin told viewers, “If we don’t fight on January 6th on the floor of the Senate and the House – and that is the joint meeting of Congress on these electors – then we are done.”

Among those taking inspiration from Fox News figures: Ashli Babbitt, the U.S Air Force veteran who joined the protests and was shot and killed while storming the Capitol. While she adopted fringe conspiracy theories of QAnon, an NPR analysis of her social media presence shows Babbitt was also significantly influenced by Fox News hosts, contributors and frequent guests. 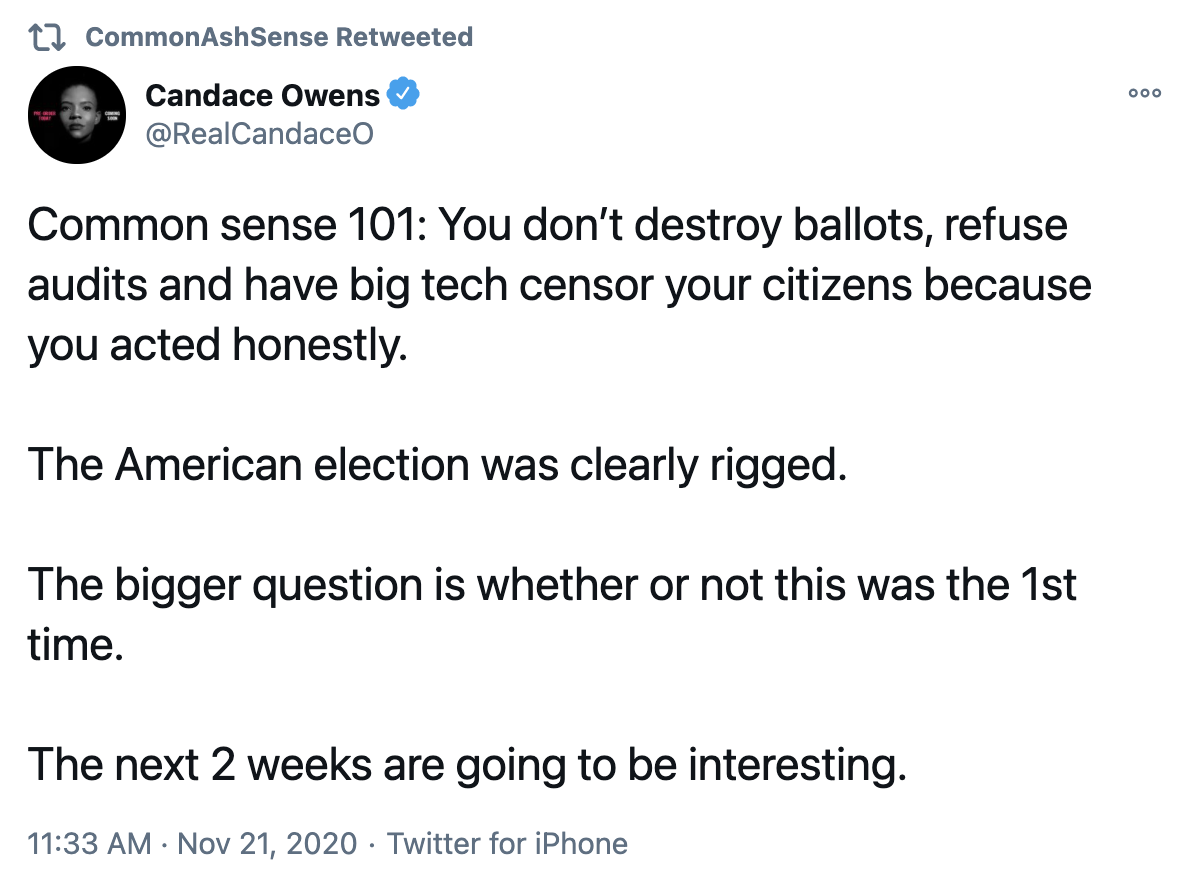 Ashli Babbitt, the Trump supporter who was killed by police while storming the U.S. Capitol, tweeted under the handle “CommonAshSense.” She frequently amplified messages from Fox News regulars like Dan Bongino and Candace Owens.

Three Fox News staffers and two other people with close ties to Fox say the network’s senior leaders have exerted no discernible effort to corral their leading figures or even express any coherent guidance for on-air discourse at a time of national crisis. (They spoke on condition of anonymity; Fox News declined to comment for this story.) For now, its strategic stance for the future is not clearly in focus to the outside eye, other than promising more of the same to hold onto Trump fans as continued viewers.

Compare that to Cumulus Media, which owns hundreds of commercial radio stations and podcasts. According to published reports, it has told its radio hosts — which include some Fox News stars — that they must accept the legitimacy of President-elect Joe Biden’s win. Several major corporations say they will no longer give money through political action committees to Republican lawmakers who sought to block Congress from confirming the Electoral College vote.

After the attack on the U.S. Capitol, some GOP officials who had pledged to challenge the election results changed their minds. Social media platforms vaporized accounts belonging to Trump and some of his most adamant supporters, saying they incited violence.

Notably, former GOP House Speaker Paul Ryan, a corporate director of Fox News’ parent company Fox Corp., had, prior to Jan. 6, denounced the Republican effort to contest the Electoral College results. But Rupert and Lachlan Murdoch, who lead Fox Corp., have been publicly silent on the subject. Since the riot, the Murdochs’ tabloid New York Post told Trump to yield to reality and accept his loss. After the mob attack on Congress, the Murdochs’ Wall Street Journal editorial page wrote that Trump committed impeachable offenses.

Protesters gesture to U.S. Capitol Police in the hallway outside of the Senate chamber at the Capitol in Washington, Wednesday, Jan. 6, 2021, near the Ohio Clock.

But Fox News’ only major move since the attack has been the announcement on Monday of the demotion of Fox news anchor Martha MacCallum’s show. She moves from a coveted 7 p.m. spot to the relative exile of mid-afternoon. She will be replaced in the evening by a rotating crop of opinion hosts, though the ultimate host is expected to be consistent with Fox’s conservative lineup. (The network also announced other promotions and shifts in the daytime schedule.)

While Fox News hosts and guests have pointedly criticized the violence in the days since the attack on Congress, the network has devoted far more time denouncing the fallout on social media for Trump and his most vocal followers.

“It’s not enough for them to stop doing it. They have to acknowledge what they’ve done in order to move forward,” said Columbia University historian Nicole Hemmer, a scholar of conservative media. “If they were prioritizing for democracy, they would scrub all this misinformation from their airwaves. They would acknowledge and even apologize for spreading misinformation about the election that helped fuel the insurrection at the Capitol.”

As a case study of one rioter who participated in the assault, NPR collected and analyzed all of Babbitt’s tweets going back to Feb. 2020. Babbitt most frequently retweeted Trump’s (now permanently banned) feed, which was a hotbed of election conspiracy theories and urged protesters to descend on Washington, D.C., en masse. Trump also called for them to pressure Vice President Pence to throw out Biden’s victory, which Pence did not have the authority to do.

Ashli Babbitt’s twitter feed frequently featured Fox News figures like Charlie Kirk, a regular guest whose bylined commentaries appear on the Fox News website. Kirk and his group supported the Jan. 6, 2021 protest events, though his group has since denounced the violence that took place.

Kirk made more than a dozen appearances and boasted in a since-deleted tweet that he had helped to arrange more than 80 buses to transport people to the Trump rally. (Kirk’s organization, Turning Point Action, later clarified to Reuters that it actually sent seven buses with 350 students to the rally. A spokesperson said Kirk “condemns political violence.”)

Bongino, who was undergoing treatment for cancer, appeared at least five times on Fox in that period and acted as a substitute on hour-long prime-time programs hosted by Sean Hannity and Jesse Watters.

“Each of those people gains legitimacy from their connections with Fox News,” Hemmer tells NPR. “It makes them non-fringe people. The fact they are tied to Fox as part of this larger misinformation infrastructure matters.” (Hemmer also writes an online column for CNN.)

And for the past two months, many Fox News hosts, commentators and guests amplified or embraced false claims that Biden only won because of widespread voter fraud — assertions rejected by state and federal officials in both parties, including Trump’s most recent past attorney general, William Barr.

In a late November interview of the president, Fox News host Maria Bartiromo repeatedly affirmed Trump’s disproven claims of electoral fraud, saying “This is disgusting, and we cannot allow America’s election to be corrupted.” In mid-December, Bartiromo announced that “an intel source” told her that Trump had won the election.

In the days ahead of the Jan. 6 siege of Congress, some Fox News figures hailed the arriving protesters like freedom fighters.

On Jan. 3, the Sunday before the insurrection, Jeanine Pirro compared those gathering to protest in Washington, D.C., with President Trump to the American soldiers in the Revolutionary War, adding, “January 6th will tell us whether there are any in Congress willing to battle for America.”

Hours before the rally started, Fox & Friends weekend host Pete Hegseth told colleagues, “The more you suppress it and tell these folks here, and others, [that] it’s just conspiracy theories, there was no fraud, there was not widespread fraud, you’re creating a bifurcation in the country where a lot of people feel their voices were completely abandoned.”

But his network made clear: it was not abandoning them. While Fox News reporters have conveyed factually Trump’s loss to Biden and his ensuing failed attempts to challenge the results in court, the channel has routinely sought to reassure Trump supporters, who number among its most ardent viewers. Fox hosts have repeatedly cited the feelings of the more than 74 million voters who checked the box for Trump — a reversal from their approach to Hillary Clinton supporters when she lost to Trump in 2016.

Babbitt’s feed suggests that she almost exclusively consumed conservative, pro-Trump media, and rejected other sources of news. “I don’t get my information from any MSM,” she tweeted in March 2020.

In a tweet targeting CNN, Babbitt wrote, “Y’all and every other MSM is garbage,” and at another point referred to MSNBC as “anti-American Commie Owened f****” [sic], and condemning mainstream media as “complete and utter crap”

In the aftermath of Election Day 2020, Babbitt retweeted Candace Owens’ baseless claim that “The American election was clearly rigged.”

Even as Republicans and corporations are distancing themselves from political figures who have joined Trump’s fight to discredit and derail the results of the November election, Fox has moved to keep such conservative voices front and center. It is doing so while seeking to fend off pressure on two fronts: from CNN’s ratings surge and from smaller right-wing competitors proving even more loyal to Trump.

On the day of the siege itself, Martha MacCallum initially said breaching the U.S. Capitol represented a “huge victory for these protesters,” even as she told viewers of tear gas in the Rotunda and orders to lawmakers to put on gas masks. “Revolt is a word that can be used here in some ways.”

As the day progressed, Fox’s journalists and opinion hosts denounced the violence, including Pirro and others who had encouraged the pro-Trump protests. Some quickly turned to the pain and frustration of Trump supporters. Others including Tucker Carlson, senior analyst Brit Hume and primetime host Laura Ingraham spread or indulged the idea — declared false by law enforcement officials — that somehow the attacks were organized by Antifa activists or other anti-Trump leftists.

Carlson later told viewers that it was violent and wrong, a protest that got out of control, but added, “It was not an insurrection! Stop with the lying!” Pirro compared the revocation of web services for the right-wing social media platform Parler to Kristallnacht, a deadly night of Nazi killing and repression of German Jews in 1938. And Fox News anchor Bill Hemmer asked whether stripping Trump of his Twitter account might not be the ultimate cancel culture move, “the events of the last Wednesday notwithstanding.”

Robert Benincasa of NPR’s Investigations Unit contributed to this story.

Republicans lash out against new security measures at the Capitol