US President Donald Trump responds to "The Atlantic" story on his attitude on service members after stepping off Air Force One upon arrival at Andrews Air Force Base in Maryland on September 3, 2020. - Trump attacked the report which claimed he referred to US Marines buried in a WWI cemetery in France as "losers" and "suckers." (Photo by MANDEL NGAN / AFP) (Photo by MANDEL NGAN/AFP via Getty Images)

In his ongoing quest to overturn the November election, President Trump has demanded total loyalty of his fellow Republicans around the country, but nowhere more dramatically than Georgia where the last thing Republicans needed was an intra-party fight heading into its competitive U.S. Senate runoffs on Tuesday. 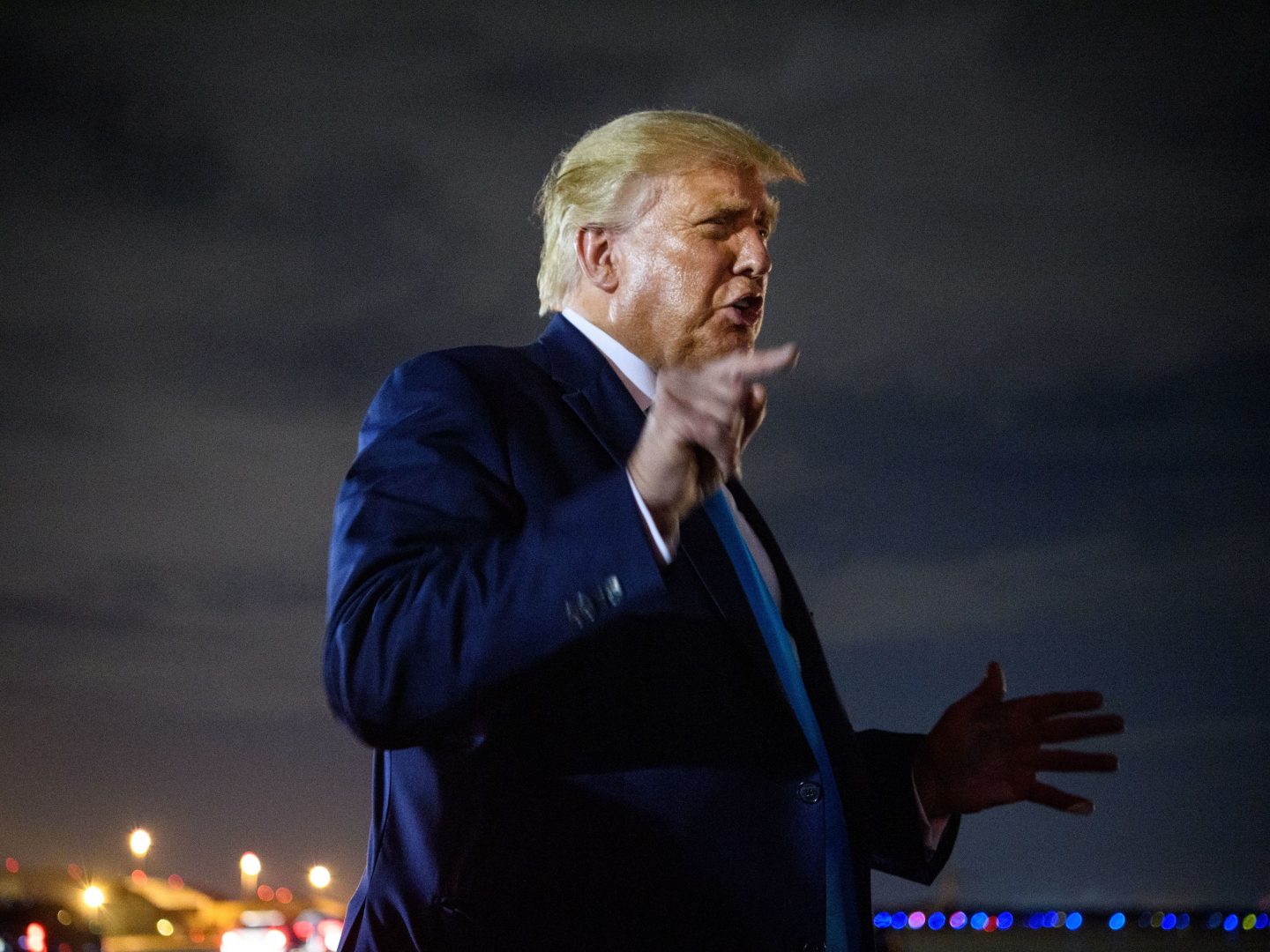 US President Donald Trump responds to "The Atlantic" story on his attitude on service members after stepping off Air Force One upon arrival at Andrews Air Force Base in Maryland on September 3, 2020. - Trump attacked the report which claimed he referred to US Marines buried in a WWI cemetery in France as "losers" and "suckers." (Photo by MANDEL NGAN / AFP) (Photo by MANDEL NGAN/AFP via Getty Images)

(Washington) — In his ongoing quest to overturn the November election, President Trump has demanded total loyalty of his fellow Republicans around the country, but nowhere more dramatically than Georgia where the last thing Republicans needed was an intra-party fight heading into its competitive U.S. Senate runoffs on Tuesday.

In recent weeks, the state’s top Republican officials have resisted Trump’s demands to overturn what has been upheld as a secure election. In a bombshell phone call leaked over the weekend, Secretary of State Brad Raffensperger stood firm against the president’s lobbying for him to “find 11,780 votes, which is one more than we have, because we won the state” and “recalculate” the vote tally in his favor.

In recent weeks the president has taken to regularly berating officials including Raffensperger on Twitter, encouraging a 2022 primary challenge to former close ally Gov. Brian Kemp, and last week in calling for Kemp to resign. It all begs the larger question of how this destabilization could affect Republicans’ chances in the newly-minted battleground state.

President-elect Joe Biden won Georgia by nearly 12,000 votes. The Republican secretary of state and U.S. attorney general have said there’s been no evidence of widespread voter fraud in the November election.

At a Monday night rally in Dalton, Ga., Trump vowed to “fight like hell” to keep the White House, again falsely alleging Democrats stole the election.

The situation created by Trump has left many Georgia Republican operatives incredulous, especially because the high-profile Republican drama comes as voters in Georgia are set to determine the balance of power in the Senate through two Tuesday runoffs. Polls show the races as close, and it’s evident that neither party can afford to leave any votes on the table.

“There’s definitely a civil war, if you will, brewing in the Republican Party, but not just in Georgia,” Garrett said. “It’s what does a post Trump presidency look like? And can we bring it back together?”

‘Do not self-suppress your own vote’

For Kemp, the runoffs and implications for Republicans in Georgia are clearly front of mind.

“No one, whether you’re mad at me, whether you like me, should get distracted by anything other than getting out to vote,” Kemp responded at a press conference hours after Trump’s tweet calling for Kemp’s resignation. “That is where my focus is. I don’t want to wake up on January the 6th and wonder what else I should have done.”

One of Raffensperger’s top deputies, Gabriel Sterling, on Mondayreiterated the same message, as he debunked a litany of conspiracy theories the president has perpetuated. “Given the nature of the president’s statements … We are specifically asking and telling you to turn out and vote tomorrow,” Sterling said. “Do not self-suppress your own vote.”

Yet Trump’s attacks on Kemp, Lt. Governor Geoff Duncan and Raffensperger have, at best, sown confusion and, at worst, caused some Republican voters in Georgia to turn against their officials. The president has also put the two incumbent Republican senators, Kelly Loeffler and David Perdue, in the unenviable position of being in the middle.

‘Whipsawed by their own party’

The two senators’ relationships with Kemp in particular have been close. Perdue’s lobbying secured Kemp a crucial Republican primary endorsement from Trump in 2018. Loeffler wouldn’t be a senator without Kemp, who appointed her to the position last year, against the president’s wishes.

And yet, Loeffler and Perdue have stayed in lockstep with Trump during their runoff campaigns, refraining from congratulating President-elect Joe Biden, and breaking with their caucus to support what had been a Democratic priority of $2,000 in coronavirus relief checks because Trump took up the cause.

They supported an unsuccessful lawsuit led by the state of Texas in the Supreme Court against the state of Georgia to overturn the election results, have not spoken out in Kemp’s defense and quickly called for Raffensperger’s resignation in November.

Loeffler, who has repeatedly labeled herself “100% with President Trump” has avoided directly answering from the press about the tape of Raffensperger and the president’s conversation, as well as the call for Kemp’s resignation.

Instead of trying to appeal to independent or more moderate Republicans as well as the Republican base, Garrett said, Loeffler and Perdue have been “forced” to focus on what would normally be easier voters to count on among their base. “The problem was, you had this huge megaphone out of Washington telling them ‘Don’t trust the system,'” Garrett said.

“The problem is the messages are almost so different,” he said. “The more you talk about Trump, the less you can talk to independents or soft Republicans in the suburbs.”

And the November numbers indicate there are some voters in the middle who voted a split ticket, for Biden and Senate Republicans.

The question, Garrett said, is whether Trump will be a “constructive” force in Republican primaries by backing candidates like Brian Kemp, or back pro-Trump challengers and undermine Republicans’ ability to win statewide in competitive states like Georgia.

“The big question amongst us, as operatives in this world is, are we going to have to lose races in 2022 and 2024, that we should have won, because of [Trump’s] outsize influence in Republican primaries?” he said.

“There are very few things that I can say I would guarantee, but I can guarantee that if there’s a well-funded Trump challenge to Brian Kemp as governor, then [former Democratic gubernatorial candidate and voting activist] Stacey Abrams is the most likely the next governor of the state of Georgia,” he said. “And we as Republicans better come to grips with that reality.”