January pick of the month: “Hang Tough” by Erik Dorr and Jared Frederick 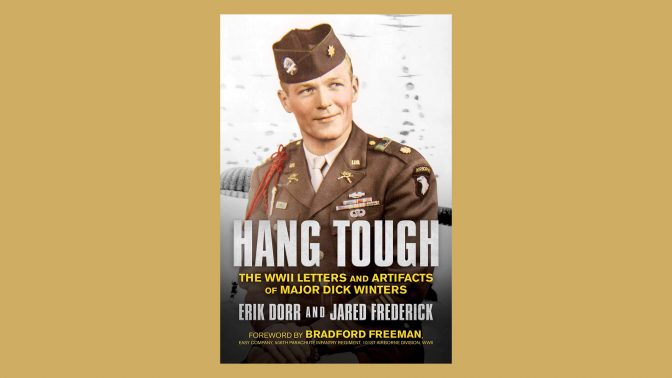 WITF is partnering with Midtown Scholar Bookstore on a Pick of the Month. Read along with us and discover books we think you’ll like. January’s pick is Hang Tough by Erik Dorr and Jared Frederick.

Major Dick Winters of the 101st Airborne gained international acclaim when the tale of he and his men were depicted in the celebrated book and miniseries Band of Brothers. Hoisted as a modest hero who spurned adulation, Winters epitomized the notion of dignified leadership. His iconic World War II exploits have since been depicted in art and commemorated with monuments.

Beneath this marble image of a reserved officer is the story of a common Pennsylvanian tested by the daily trials and tribulations of military duty. His wartime correspondence with pen pal and naval reservist, DeEtta Almon, paints an endearing portrait of life on both the home front and battlefront—capturing the humor, horror, and humility that defined a generation. Interwoven with previously unpublished diary entries, military reports, postwar reminiscences, private photos, personal artifacts, and rich historical context, Winters’s letters offer compelling insights on the individual costs and motivations of World War II service members.

Winters’s heartfelt prose reveals his mindset of the moment. From stateside training to the hedgerows of Normandy, his correspondence immerses readers in the dramatic experiences of the 1940s. Via the lost art of letter writing, the immediacy and honesty of Winters’s observations takes us beyond the traditional accounts of the fabled 506th Parachute Infantry Regiment’s Easy Company. This engaging narrative offers a unique blend of personal wit, leadership ethics, and broader observations of a world at war. Hang Tough is a deeply intimate, timely reflection on a rising officer and the philosophies that molded him into a hero among heroes.

December pick of the month: "Humans" by Brandon Stanton