Satellite offices gave Pa. voters more options to cast early ballots in person. Were they worth it?

Six of the state's most-populated counties decided to open auxiliary offices. Just one has firm plans to continue using them in the future. 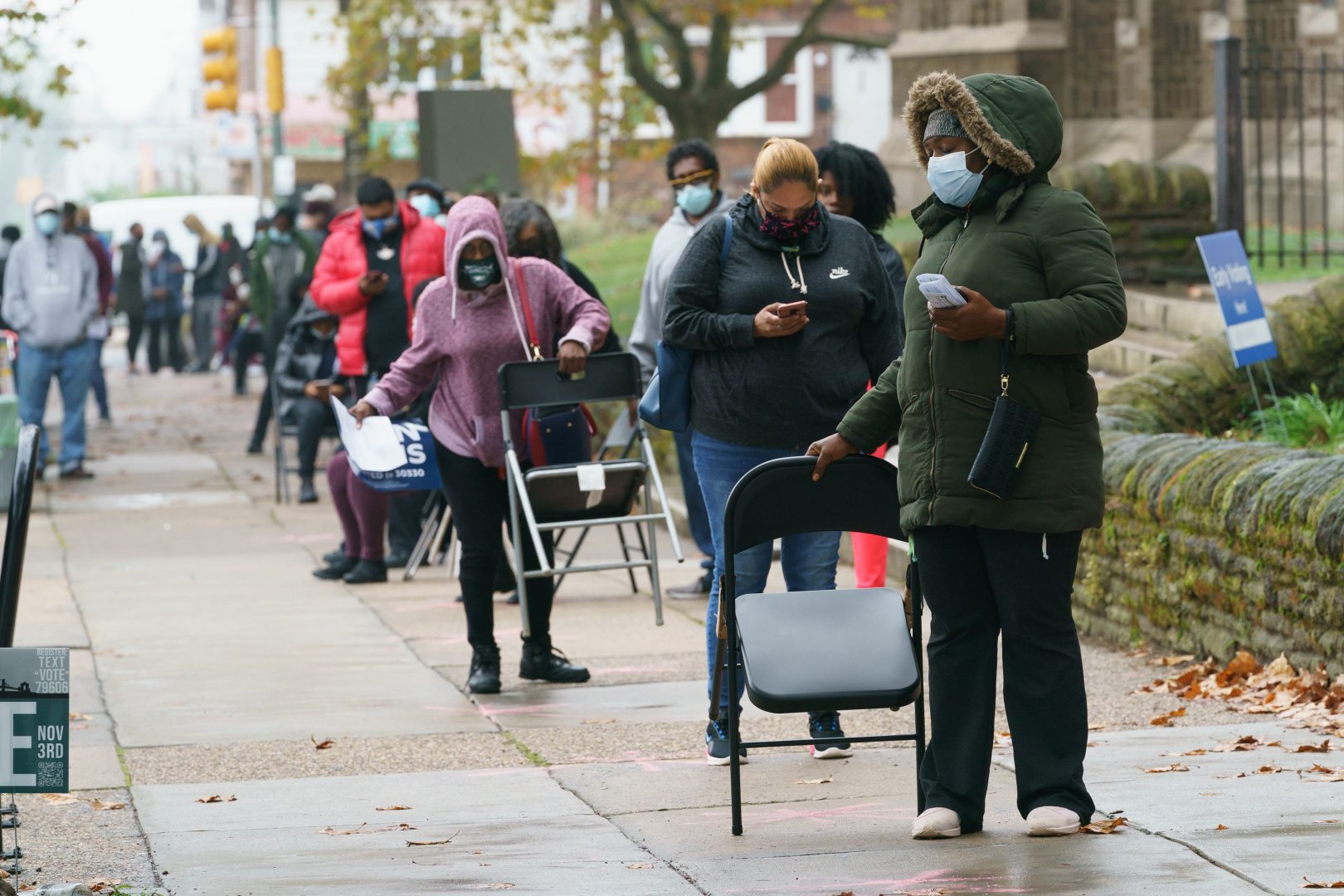 (Harrisburg) — A week before the Nov. 3 election, state officials urged voters not to risk a late arrival of their ballot through the mail and instead to return it in person.

All voters could do that at their county election office, but some Pennsylvanians had the additional options of drop boxes and satellite locations. The latter expanded the number of places where people could essentially vote early, by requesting a ballot in person and submitting it on the same day.

Of the state’s 67 counties, six of the most highly populated decided to open auxiliary offices. Pro-voting organizers said they made voting easier and more accessible to those who couldn’t or didn’t want to go to the polls.

But after what local officials said was the most expensive election ever, counties aren’t sure how, or if, they’ll keep using satellite offices. The next opportunity to do so is the May 18 municipal primary, the first lower-turnout election under the law that created no-excuse mail voting.

It’s also unclear whether the offices contributed to this year’s record-high 71% turnout among the voting-age population.

State officials did not provide a hard number for how many voters took advantage of the satellite offices, but a spokesperson for the Department of State said that about 125,000 ballots were cast in person at a county election or secondary office. That’s about 5% of the 2.6 million mail ballots cast in the general election.

Of the six counties Votebeat and Spotlight PA contacted, just Bucks County said it has firm plans to make use of the offices in the future.

Philadelphia election officials are currently talking to the mayor’s office and City Council about funding satellite offices in the future, a spokesperson for the City Commissioners’ office said. Spokespeople for the four other counties — Allegheny, Chester, Delaware, and Montgomery — said officials have not yet decided if they will make use of these offices in the future.

At least one Republican in the state House wants to make it impossible for any counties to use them moving forward.

Rep. Dan Moul, of Adams County, said he plans to introduce legislation that would ban both drop boxes and satellite offices — an idea, he said, that has overwhelming support among his caucus.

His complaint is a common one among the GOP: that the Democrat-controlled state Supreme Court had legislated from the bench when the justices ruled on election matters.

Satellite election offices, as well as drop boxes, were the target of unsuccessful litigation from the Trump campaign and state Republicans, with the GOP arguing they violated the state’s Election Code and claiming without evidence they increased the risk of voter fraud.

State Supreme Court justices said the additional ballot services aligned with the intention of Act 77, to give people more options to vote. A federal judge dismissed another suit because the Trump campaign could only claim the law would theoretically lead to fraud.

“Yes, sometimes the postal system is not very credible, I get that, but if you feel it’s not credible, drive it to a permanent office of the election bureau and drop it off,” Moul said. “Take it to the courthouse and drop it off, it’s not a hard thing to do.”

But at least during the final two years of Democrat Gov. Tom Wolf’s term, such a ban is unlikely to happen.

Wolf “would veto an attempt like this to reduce citizens’ access to the kinds of voting options that were widely embraced in this election, and which many other states have enjoyed for years,” said Lyndsay Kensinger, a spokesperson for the governor. The Eagles mascot, Swoop, and team cheerleaders greeted voters dropping off their mail ballots at a satellite election office site at Lincoln Financial Field in Philadelphia on Nov. 2, 2020.

In January, the state sent counties guidance on Act 77, the law that brought no-excuse vote-by-mail to Pennsylvania and eliminated a straight-ticket voting option on ballots.

Erie County Councilman Carl Anderson III, chair of the elections board, said officials there looked at various options they thought would help them handle the new mail ballot system — without breaking the bank. They decided against satellite offices, but became the first county in the state to approve a drop box.

The metal receptacle located in front of the county courthouse, which already had constant surveillance, only cost about $2,000, Anderson said. Satellite offices would have meant hiring more workers and implementing additional security measures.

“We just said, ‘There’s no way we could underwrite that type of expense,’” Anderson said.

Few did, though the counties that set up satellite offices for the general election are home to 40% of the state’s population.

In Philadelphia, officials expected each office to cost an additional $100,000. The city ultimately funded 17 using part of a $10 million grant from the Center for Tech and Civic Life. Bucks and Delaware Counties made use of existing sites to control costs, The Philadelphia Inquirer reported in August.

These satellite offices gave many voters an opportunity to safely drop off their mail ballots closer to home than their county’s central office. Suburban counties kept satellite offices open until 8 p.m. some weekdays, well beyond normal working hours for county governments.

Some sites in Bucks County, Montgomery County, and Philadelphia saw long lines of voters who wanted to request a mail ballot without having to risk U.S. Postal Service problems.

“Interest in requesting a ballot in person at our satellite offices has been very high,” Montgomery County spokesperson Teresa Harris told Patch in October.

To excite voters and make the experience more enjoyable, campaigns and pro-voting organizations in Philadelphia and Pittsburgh showed up outside some of the voting sites, offering music, free food, and a block party atmosphere.

“Standing in line doesn’t seem so boring when you have music, and you have a drum corps, you’re eating really good food from a food truck,” said Andy Toy, development and communications director at SEAMAAC, a Philadelphia-based nonprofit that serves refugees and immigrants.

In October, SEAMAAC brought a food truck to one of the city’s satellite offices and offered free food to passersby. Toy said the agency has focused on encouraging those in Asian and Pacific Islander communities to register to vote in recent years, and promoted Philadelphia satellite voting sites this year.

“Making it a real community kind of thing, you can’t argue with that, I don’t think,” Toy said.

The ability to vote on a Saturday or Sunday was also a boon for those who couldn’t get out of work on Election Day, he said, and the festive atmosphere helped some voters feel more comfortable than they would at the polls.

“In general, you won’t find any Asian Americans working at the polling place as poll workers, and so you know, something that might feel intimidating to begin with is even more intimidating,” Toy said. Limited English proficiency at the polls can contribute to that unease, he said.

Calyx Deroche, media and data consultant at the Pittsburgh-based Black Political Empowerment Project, said the option to cast a vote during the weekend was helpful for voters, and the games, music, and food helped generate more excitement around voting this year.

Organizers even billed one event at a satellite office as a tailgating party for a Pittsburgh Steelers game.

“It was a great celebration and people responded as a result,” said Khalif Ali, executive director at Common Cause Pennsylvania, a watchdog and voting rights group. Ali attended one of the events next to a Pittsburgh satellite office in October.

Despite the community celebration, it’s unclear if the events, in Pittsburgh at least, ultimately boosted turnout, said Will Anderson, chief of staff for the Democratic National Committee’s Black caucus and director of the Allegheny County Democratic Black Caucus.

The satellite offices themselves are a great option to make voting more convenient, but parties outside them are “more expensive than it is beneficial,” Anderson said. “We’d rather have those expenses put into voter education, voter outreach. We can have our own parties and celebrate after the election.”

But some political scientists and pro-voting groups point to research that suggests voting festivals are a winning strategy to boost turnout.

Experiments conducted in recent years by Donald Green, a political science professor at Columbia University, showed a turnout rate boost of about two percentage points in areas where the festivals were promoted.

Still, it’s unclear whether festivals will catch on in future elections. When it comes to the spread of a new campaign tool, he said, “the question always in American politics is, is it profitable for campaign consultants?”