Like many of his colleagues, postal worker Rickey Ramirez is working overtime to keep up with the crush of Christmas deliveries. Many packages are likely to be delivered after Dec. 25.

Millions of gifts may arrive late, as the U.S. Postal Service grapples with an unprecedented volume of packages from people shopping online, instead of at stores, and shipping holiday gifts instead of bringing them in person. 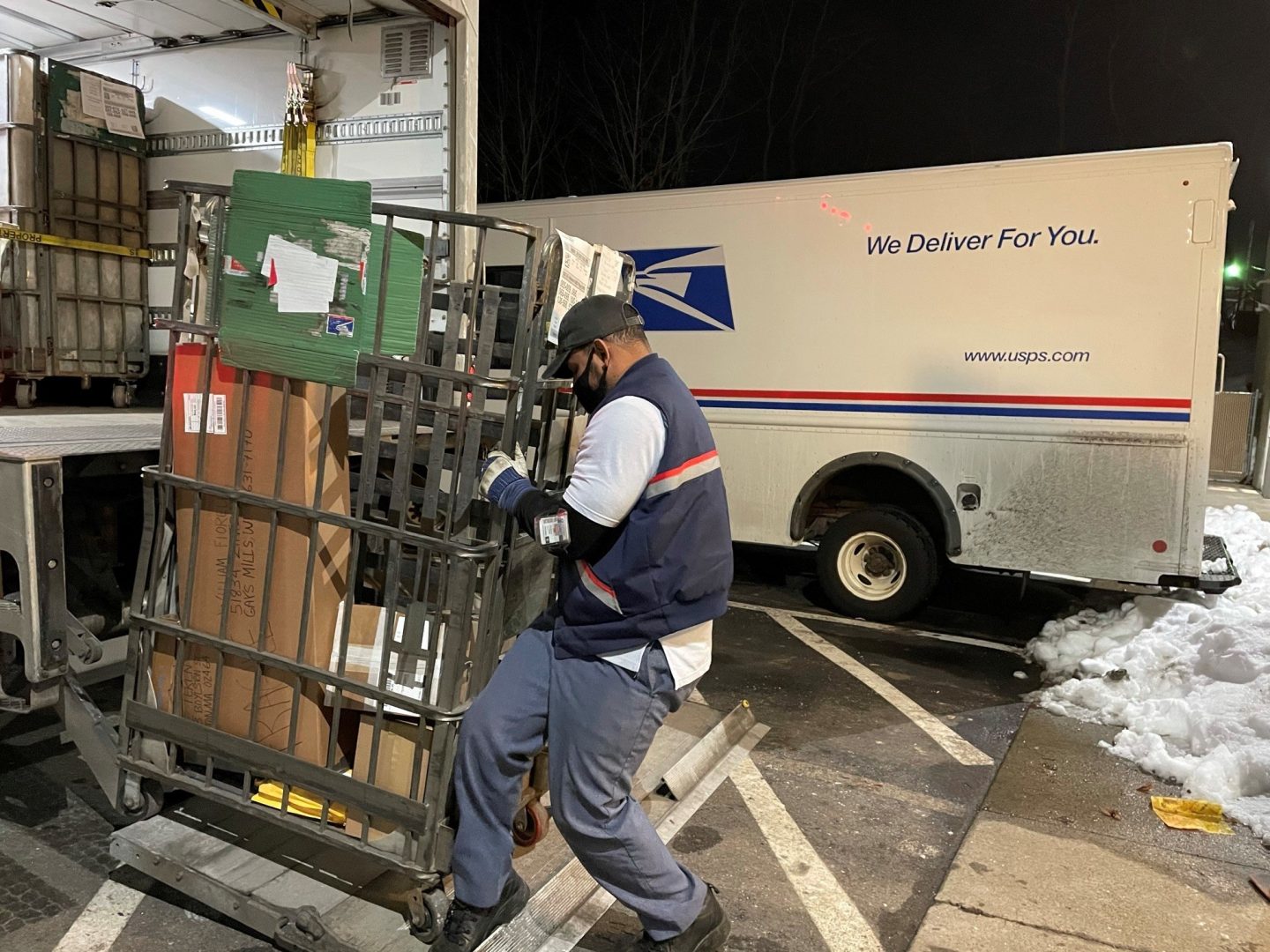 Like many of his colleagues, postal worker Rickey Ramirez is working overtime to keep up with the crush of Christmas deliveries. Many packages are likely to be delivered after Dec. 25.

(Washington) — If you’re the type to be disappointed by what’s under the Christmas tree, this year you may find yourself even more dismayed by what’s not under the tree. Millions of gifts may arrive late, as the U.S. Postal Service grapples with an unprecedented volume of packages from people shopping online, instead of at stores, and shipping holiday gifts instead of bringing them in person.

“We’re really busy. It’s been unbearable,” sighed Manny Huenchunir, a Postal Service truck driver who was unloading and reloading crates of mail at a post office outside Boston on Tuesday night. The main Boston processing center, he says, is overwhelmed.

“The warehouse is packed,” Huenchunir said. “Boxes from wall to wall and trucks waiting to get into dock for like three hours, waiting in line just to unload.”

“We’ve been bombed. It’s been crazy,” says postal clerk Debbie Aspell, who’s feeling it from both sides of the counter. She has been working 11-hour days, six days a week, for most of the month. And she’s trying to get Christmas gifts to her own family, including the pajamas she sent to her son in Texas.

“I sent it by express mail, and I keep tracking it, and it says it’s still in Boston,” she says. Her son is 36, but Aspell says, “No matter how old your kids are, you still don’t want to see them wake up Christmas morning with nothing.”

In her living room in Natick, Mass., Elizabeth Pruitt, 39, is also feeling the pressure as she shows off her glimmering Christmas tree, bedecked with ornaments and lights but still bereft of any gifts underneath. Some are hidden away from her kids, but the big haul she ordered online in November is three weeks late. When she tracks it online, all she gets is a message saying there is a high volume of packages and no further information is available.

Her 8-year-old daughter, Brooke Dell Orto, is bracing for yet another week of waiting.

“If it doesn’t come on time, that would be terrible,” she says. “Then we’ll be celebrating Christmas on New Year’s Eve.”

The Postal Service’s on-time delivery rate for first-class mail sank to about 75%, from 95% last season, according to agency data from early December. And it’s not just Christmas gifts that are imperiled, of course. The Postal Service handles more than 1 billion prescriptions every year, and many of those are also running dangerously late.

Terri Vacca, a 61-year-old bookkeeper in Cleveland, is waiting on two prescriptions that she ordered nearly three weeks ago for her 81-year-old mother. She’s tracking the delivery online multiple times a day, but its status hasn’t been updated since Dec. 9, so there’s no telling when it will arrive.

“That’s where the anxiety comes in, because she’s talked about rationing this medication by taking it every other day instead of every day, but it is essential,” Vacca says. Her Christmas gifts are late too, but she says, “Those are not a matter of life and death.”

It’s nerve-wracking, says her mother, Carole Vacca. “Not only do you have to worry about this virus going around, but then you’ve got to worry about your medications being in limbo.”

The Postal Service declined to speak to NPR for this report but in an email said the agency’s “entire Operations team, from collections, to processing to delivery, is working around the clock to address the historic volume.”

This year’s load is estimated to be 40% over normal, with some days spiking much higher.

Even the 50,000 extra temporary workers hired this season and vast amounts of overtime aren’t enough to keep up.

“It’s a tsunami,” says Scott Hoffman, president of the American Postal Workers Union, Boston Metro Area. “We’re going to do the best we can, but there’s no stopping a tsunami.”

To make matters worse, just as post offices need all hands on deck, some 19,000 workers are either out sick with COVID-19 or in quarantine, according to the postal workers’ union.

“We continue to see high rates of absenteeism in hot spots around the country,” said Postmaster General Louis DeJoy in a video to employees last week. “This has impact on local and national service performance, and it adds stress throughout the workforce.”

The Postal Service has been scrambling to divert packages around the most hard-hit and understaffed areas, sometimes confounding customers who are tracking their packages online and watching them going in the wrong direction. But Hoffman says that’s often a better option than standing still.

“I mean, I hate to say it, but it’s like a giant sewer system,” he says. “Everything has to keep flowing. If it’s not flowing, then it’s backing up. And then how are you going to dig out?”

Compounding the Postal Service’s problems is the extra burden of having to pick up the slack for private carriers — for example, when UPS stopped taking certain packages.

“The private carriers got overwhelmed and had a safety valve, which is to tell customers to get lost,” says Mark Diamondstein, president of the American Postal Workers Union. “The Postal Service does not have that safety valve. The post office will never say no.”

In fact, by law, the Postal Service is not allowed to do that kind of “cherry-picking,” as Rep. Gerry Connolly, D-Va., calls it. A member of the House Oversight and Reform Committee, Connolly says the Postal Service’s challenges have also been exacerbated by chronic underfunding and cost-cutting initiatives implemented by DeJoy over the summer.

“The Postal Service is still paying a price for the disastrous reorganizations imposed on it by a postmaster general who was hired essentially to disrupt the ability of the Postal Service to deliver ballots in November,” Connolly says.

Others dispute the notion.

“I don’t think you can blame any service outages now on those decisions last summer,” says Michael Plunkett, president and CEO of the Association for Postal Commerce, a trade group for commercial mailers. He blames the holiday rush for “crashing” the Postal Service and “causing cascading impacts throughout various networks. I’m observing a level of frustration that I’ve never seen before.”

Steve Hutkins, a retired English professor from New York University’s Gallatin School, who runs a Postal Service advocacy website called SavethePostOffice.com, is hardly a fan of Postmaster General DeJoy. But if the impact of his summer cost-cutting measures is “murky,” Hutkins says, “DeJoy knew this [holiday rush] was coming, and it’s ultimately his responsibility to make sure the Postal Service runs right, and now it’s a big mess. The buck stops with him.”

Back around the Christmas tree at her home in Massachusetts, Elizabeth Pruitt is still holding out hope for a surprise delivery to come in under the wire. But as those chances dwindle, she and the kids are making peace with the growing likelihood that their gifts aren’t going to make it by Christmas.

“I’m just trying to keep it all in perspective and be grateful that we can spend the day together and we’re healthy,” she says. “It is what it is. And [the children] have to learn that sometimes things don’t always play out as planned.”

Indeed, that seems to be the recurring lesson of 2020.

COVID-19 relief bill could stave off historic wave of evictions