Kathy Dahlkemper of Erie County, Parliamentarian of the Electoral College casting her ballot. Secretary of State Kathy Boockvar presided over the 59th Pennsylvania Electoral College meeting at noon today, during which the commonwealths 20 electors unanimously voted for Joseph R. Biden for president and Kamala D. Harris for vice president of the United States. Harrisburg, PA December 14, 2020 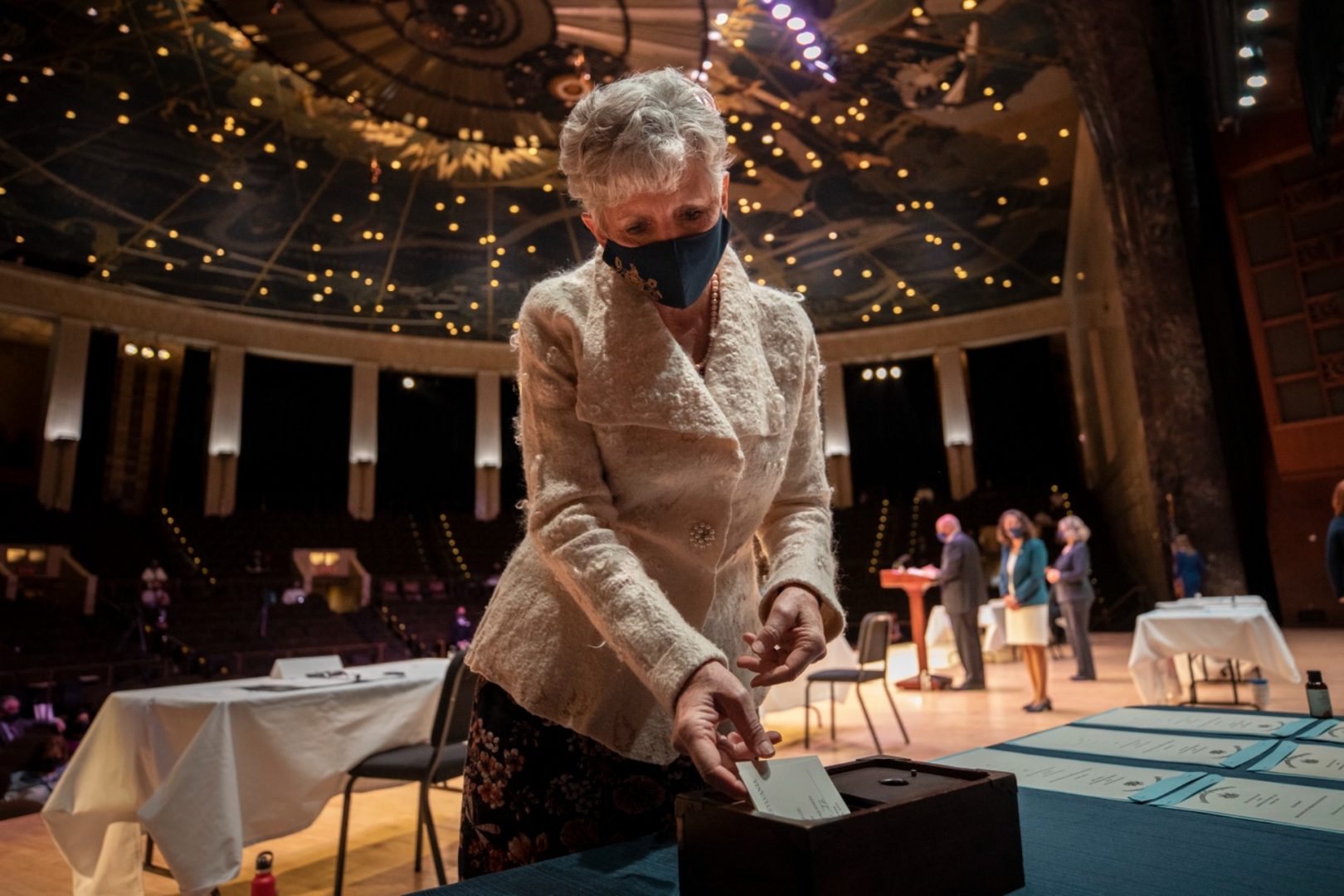 Kathy Dahlkemper of Erie County, Parliamentarian of the Electoral College casting her ballot. Secretary of State Kathy Boockvar presided over the 59th Pennsylvania Electoral College meeting at noon today, during which the commonwealths 20 electors unanimously voted for Joseph R. Biden for president and Kamala D. Harris for vice president of the United States. Harrisburg, PA December 14, 2020

(Harrisburg) — Despite the potential for protests during Monday’s Electoral College vote, Pennsylvania’s routine certification ceremony was just that.

Between 40 and 50 people gathered in an auditorium on the Capitol grounds, and because of the pandemic, all sat far apart and wore masks. Only the 20 electoral college members, required state leaders and staff, and a handful of media were allowed inside. A morning snowstorm might have discouraged any outside crowd from forming.

“The bigger [concerns] were around COVID-19: the fact that we’re all wearing masks, we’re socially distanced, we weren’t in the hall of the House,” said state Sen. Sharif Street (D-Philadelphia), one of the group of 20 Democratic Party faithful who met with reporters after the vote.

This year’s meeting was a departure from four years ago, when protestors railed against Donald Trump’s election and called on electors to “vote their conscience.” Nonetheless, this cycle’s meeting was rife with historic moments of its own apart from taking place amid the coronavirus pandemic.

Secretary of State Kathy Boockvar said a record number of voters participated, nearly 100 years to the date when women were first allowed to vote after the passage of the 19th Amendment to the US Constitution.

“Despite being in the middle of a global pandemic, more Pennsylvanians than ever before – 6.9 million – participated in the Nov. 3 election and had their voices heard,” Boockvar said.

“A couple of times I felt myself having goosebumps as they made certain announcements and certainly as we had the final vote count put forward. So it was truly an honor to be here,” said Erie County Executive and Democratic elector Kathy Dahlkemper.

The routine nature of Monday’s ceremony stood in stark contrast to what has been a turbulent post-election season in the Keystone State. President Trump’s campaign and others, including Pennsylvania Republican Congressman Mike Kelly and even Texas Attorney General Ken Paxton, have brought dozens of legal challenges to the election results — including cases that specifically targeted Pennsylvania’s vote — over the last six weeks.

State and federal courts, notably including the U.S. Supreme Court, have either ruled against or dismissed each of those cases for lack of evidence.

“Texas has not demonstrated a judicially cognizable interest in the manner in which another State conducts its elections,” the court wrote in a short judicial order dismissing the Texas case.

Nonetheless, concerns about demonstrations such as those in Washington, D.C. over the weekend disrupting electoral college ceremonies were palpable among Pennsylvania’s delegation.

Dahlkemper was among those who were glad they didn’t come to pass.

“I always had faith in the process and I always believed that truly, in the end, it would result in us being here today but there was a lot of uncertainty as each challenge came forward,” she said.

“Luckily there were no incidents and it was a very calm and uneventful process.”

A special session of Congress will vote to approve the state’s Electoral College votes on Jan. 6. Biden’s inauguration is set for Jan. 20.