Demonstrators with the Movement of Immigrant Leaders in Pennsylvania gather outside York County Prison on Dec. 10, 2020.

Demonstrators in York call for releases from immigration detention

(York) – Advocates are raising alarms about the risk of COVID-19 infection inside immigration detention centers.

At a vigil outside York County Prison on Thursday evening, leaders from several groups spoke and played testimony from people who had been detained – or had loved ones detained – in the building across the parking lot.

“Today, which is International Human Rights Day, I ask that we join in prayer that they free all our people who are detained,” said Carolina Ramirez through a recording. Her husband was detained there for six months before being deported.

In another recording, a woman identified as Maria shared her story in Popti’, an indigenous language spoken in the Huehuetenango Department of Guatemala. She talked about being unable to communicate with her family while she was detained and thanked the people who helped her during that time.

ICE reports coronavirus cases and deaths among those it detains, and the non-profit Vera Institute of Justice has archived that data throughout the pandemic. The organization notes inconsistencies and trends in that data that it says indicate a higher actual number of infections.

In York, ICE has reported nine active cases for a total of 117, with a spike in September. Pike County Prison has eight active cases, bringing the total to 32. Cambria County Jail had 11 total reported cases, though none are active. Clinton County Correctional Facility’s mid-November outbreak has resulted in 55 total cases and 52 active infections among ICE detainees, more current cases than ICE was reporting in any of the other facilities as of Dec. 9.

The data does not reflect a case reported at Berks County Residential Center, where a member of the medical staff tested positive in October and immediately resigned. 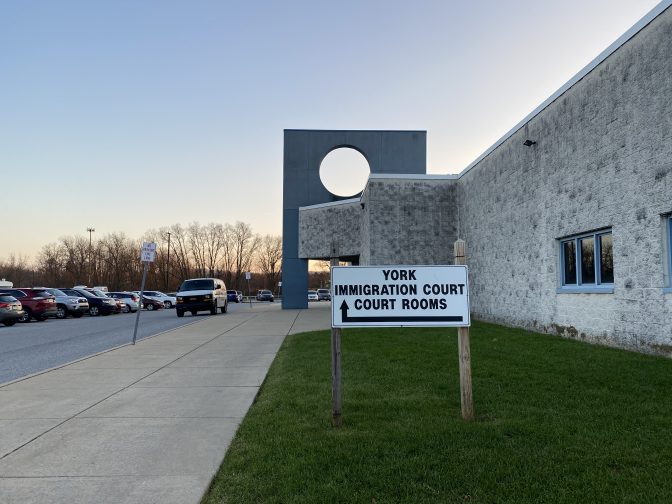 According to Syracuse University’s ICE-tracking tool, nearly 28,000 cases were pending in Pennsylvania immigration courts as of October, 267 of those in York, though not all those waiting are in detention.

This year, 21 people died in ICE detention across the country, the highest number in 15 years, CNN reported in September. Eight deaths were due to complications from coronavirus. A study in the Journal of the American Medical Association found from April to August, the disease spread more rapidly inside ICE detention centers than outside of them, despite the government’s mitigation protocols.

“We stand here holding light because we know it does not have to be this way,” Burnette said at the vigil Thursday. “We are calling on officials, from county commissioners, to the governor, to directors of ICE. We are calling on them to come together and to create a comprehensive plan to release those detained in ICE facilities.”

Online, the groups distributed a list of eighteen demands for Immigration and Customs Enforcement directors in Pennsylvania and elected officials. The petition includes points on healthcare access, virtual visitation, reentry, and the release of prisoners, particularly those at high risk because of age or preexisting conditions.

The first item is a request for the state to hold daily briefings about “conditions and plans” for people in prisons, jails, and detention centers.

As the York Daily Record reported that month, U.S. District Judge John E Jones III ordered the release of 13 people in Pike, York, and Clinton counties, but later ruled several had to return to the latter two, saying conditions had improved.

According to Syracuse University’s ICE-tracking tool, nearly 28,000 cases were pending in Pennsylvania immigration courts as of October, 267 of those in York, though not all those waiting are in detention.

International Human Rights Day takes place on Dec. 10 each year and commemorates the 1948 signing of the Universal Declaration of Human Rights.

‘There’s going to be a loss of jobs’: Indoor dining ban hits restaurants already in crisis