In this Monday, Dec. 7, 2020, file photo, people wait in line for COVID-19 testing at a site operated by CORE in Los Angeles. Virtually every state is reporting surges in cases and deaths.

COVID-19 is blamed for more than 280,000 deaths and almost 15 million confirmed infections in the United States. 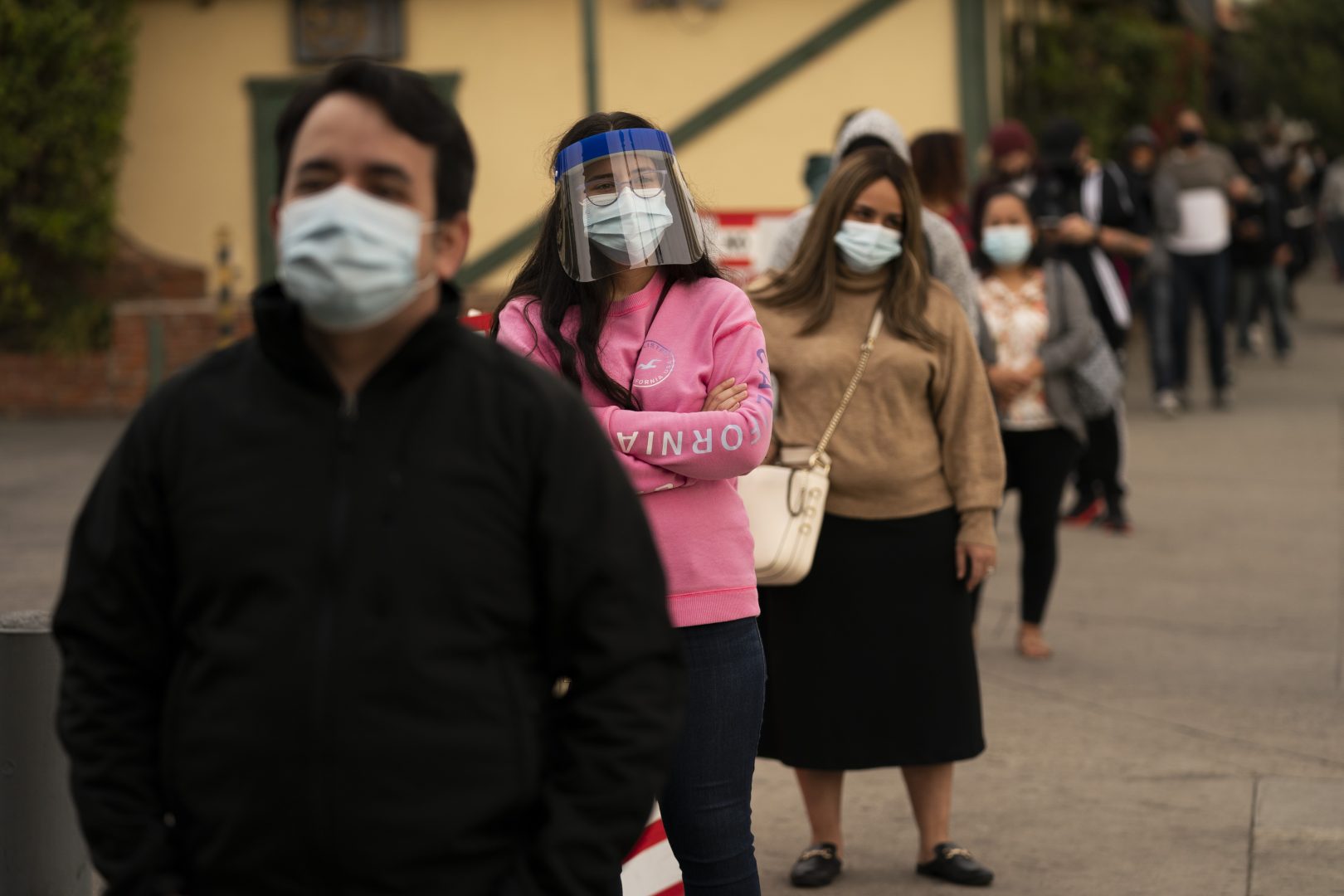 In this Monday, Dec. 7, 2020, file photo, people wait in line for COVID-19 testing at a site operated by CORE in Los Angeles. Virtually every state is reporting surges in cases and deaths.

(Washington) — Deaths from COVID-19 in the U.S. have soared to more than 2,200 a day on average, matching the frightening peak reached last April, and cases per day have eclipsed 200,000 on average for the first time on record, with the crisis all but certain to get worse because of the fallout from Thanksgiving, Christmas and New Year’s.

Virtually every state is reporting surges just as a vaccine appears days away from getting the go-ahead in the U.S.

“The epidemic in the U.S. is punishing. It’s widespread. It’s quite frankly shocking to see one to two persons a minute die in the U.S. — a country with a wonderful, strong health system, amazing technological capacities,” said Dr. Michael Ryan, the World Health Organization’s chief of emergencies.

The virus is blamed for more than 280,000 deaths and almost 15 million confirmed infections in the United States.

On Thursday, a Food and Drug Administration advisory panel is widely expected to authorize emergency use of Pfizer’s COVID-19 vaccine, and shots could begin almost immediately after that. Britain on Tuesday started dispensing the Pfizer vaccine, becoming the first country in the West to begin mass vaccinations.

Still, any vaccination campaign will take many months, U.S. health experts are warning of a surge in the coming weeks, in part because of Americans’ disregard of warnings not to travel over Thanksgiving. Dr. Anthony Fauci, the nation’s top infectious-disease expert, said the upcoming holiday season could compound the crisis even more than Thanksgiving did.

“It’s a very critical time in this country right now,” he told CNN on Monday.

The WHO’s Ryan said that the U.S. is accounting for one-third of all world cases over the last several weeks and that the “brutal reality” is that holiday hugs are ill-advised.

In Georgia, the number of confirmed and suspected coronavirus infections has soared more than 70% in the past week, and hospitals are sounding alarms about their ability to absorb new COVID-19 patients.

The stage is averaging more than 5,000 confirmed and suspected cases per day. Even then, Georgia ranks only 44th among the states for the most new cases per capita in the past 14 days because infections are spreading so rapidly everywhere else.

More than 2,500 COVID-19 patients were hospitalized Monday statewide. That’s below the summer peak of 3,200 but more than double the most recent low point in mid-October.

“We are effectively reversing the gains we made after the summer surge,” said Amber Schmidtke, an epidemiologist who does a daily analysis of Georgia’s COVID-19 numbers.

Health experts warn that well after the vaccine arrives in the U.S., masks and social distancing will remain vital to bringing the coronavirus under control.

In Pennsylvania, overwhelmed hospitals may have to begin rationing care and turning away patients, Gov. Tom Wolf warned Monday, calling it a “dangerous, disturbing scenario.”

“If the worst happens, hospitals will not be able to treat all sick Pennsylvanians,” he said. “They’ll be forced to turn away people who need treatment, and that means more Pennsylvanians will die.”

Even with that stark warning, Wolf, a Democrat, all but ruled out a return to the kinds of statewide restrictions he imposed last spring, when schools were closed, thousands of businesses deemed nonessential were shut down, and all 12.8 million Pennsylvanians were under a stay-at-home order.

In Nevada, the number of people hospitalized with COVID-19 has more than tripled over the last month, as did the number of patients needing ventilators.