People sit under a heater at a restaurant in the Old Town neighborhood of San Diego, California, U.S., on Thursday, Nov. 19, 2020. California Governor Gavin Newsom imposed a curfew on the vast majority of residents to curb coronavirus transmission, deepening measures to stop a rapid outbreak while stopping short of a full lockdown.

Nearly 85% of Californians to be under stay-at-home orders through Christmas, due to coronavirus surge

The order was triggered after ICU capacity in the two regions fell below a 15% threshold announced this past week by Gov. Gavin Newsom. 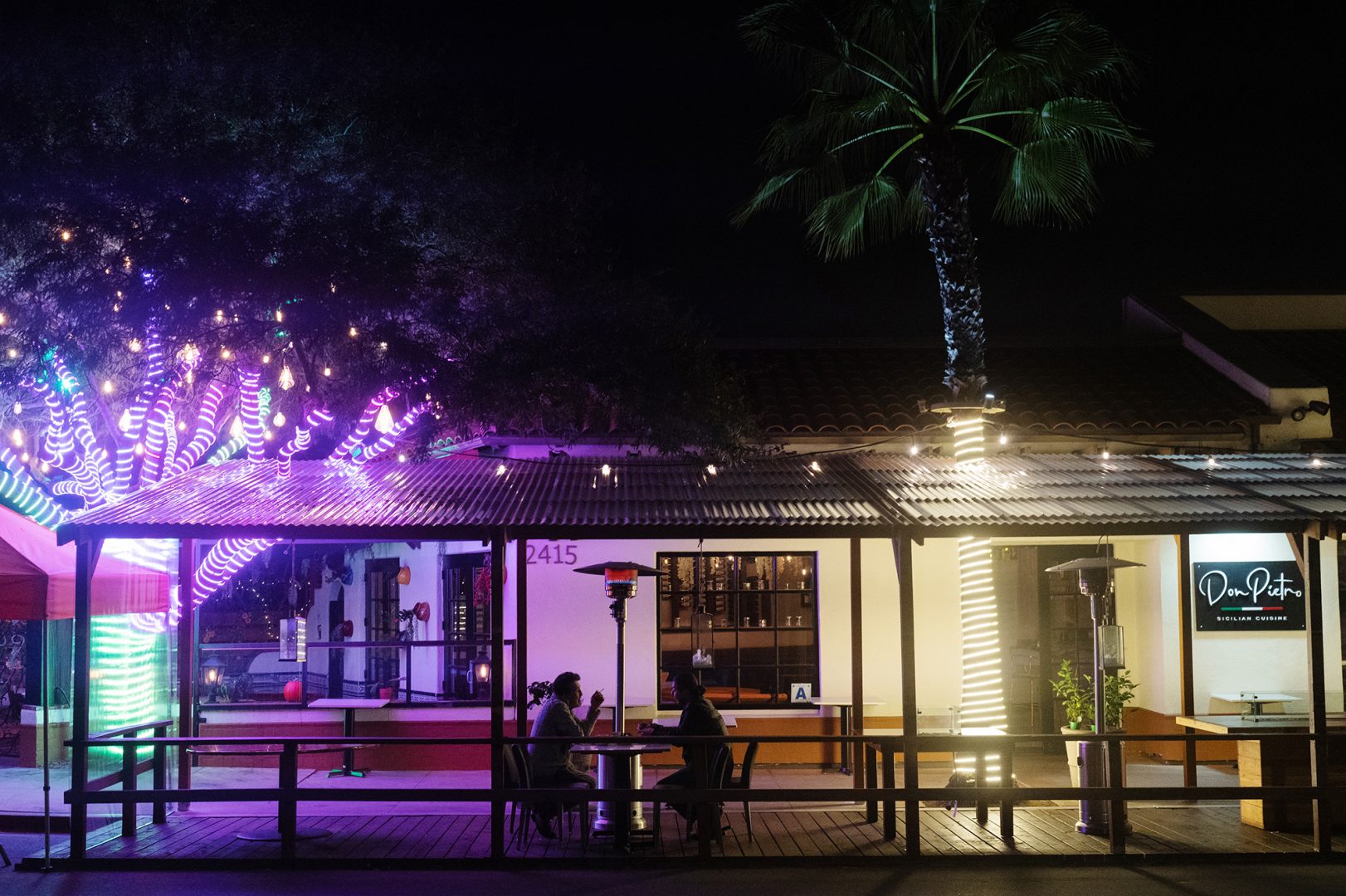 People sit under a heater at a restaurant in the Old Town neighborhood of San Diego, California, U.S., on Thursday, Nov. 19, 2020. California Governor Gavin Newsom imposed a curfew on the vast majority of residents to curb coronavirus transmission, deepening measures to stop a rapid outbreak while stopping short of a full lockdown.

(Washington) — With coronavirus cases surging and capacity inside intensive care units rapidly nearing dangerously low levels, nearly 85% of California residents will soon be under sweeping new restrictions as part of the state’s latest salvo to bring the pandemic under control.

Residents in Southern California and the San Joaquin Valley will be under a stay-at-home order through the Christmas holiday beginning at 11:59 Sunday evening. The order will mean strict new closures for many businesses and a ban on gathering with anyone outside of your household in two regions of the stae that are collectively home to some 27 million people. The order will be in effect for at least three weeks.

The order was triggered after ICU capacity in the two regions fell below a 15% threshold announced this past week by Gov. Gavin Newsom. In Southern California, the rate fell to 12.5%, while in the San Joaquin Valley it had dipped to 8.6%, state health officials announced Saturday.

“We are at a tipping point in our fight against the virus, and we need to take decisive action now to prevent California’s hospital system from being overwhelmed in the coming weeks,” the governor said ahead of Saturday’s announcement. By invoking the order, Newsom said, “we can flatten the curve as we’ve done before and reduce stress on our health care system.”

The order marked a dramatic shift for California, which for months had managed to avoid the worst of the virus relative to the rest of the United States. Much of that success was owed to early action. In March, the state ordered all 39.5 million of its residents to stay at home indefinitely in what was then the widest-ranging directive in the nation. That order came at a time when California had roughly 1,000 confirmed cases and 19 deaths. As of Friday, the state had recorded more than 1.3 million cases and nearly 20,000 deaths. 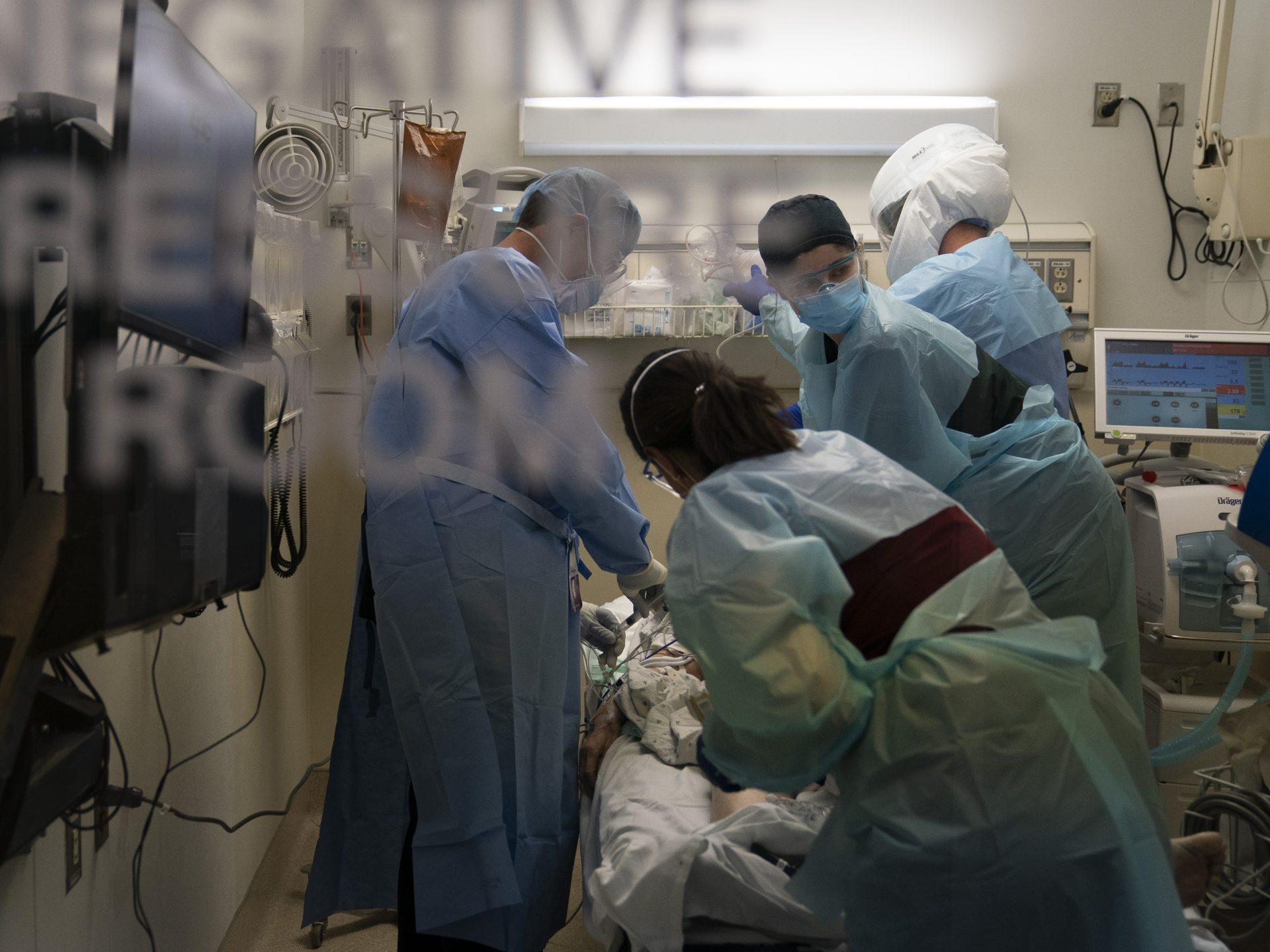 EMT Giselle Dorgalli, second from right, looks at a monitor while performing chest compression on a patient who tested positive for coronavirus in the emergency room at Providence Holy Cross Medical Center in the Mission Hills section of Los Angeles, Thursday, Nov. 19, 2020. California is imposing an overnight curfew on most residents as the most populous state tries to head off a surge in coronavirus cases that it fears could tax its health care system, Gov. Gavin Newsom announced Thursday.

The latest directive will be felt in nearly every aspect of daily life. It asks residents to stay at home “as much as possible” and for “100 percent masking” when they are outside. Restaurants will be open only for takeout or pickup, while businesses such as hair and nail salons, movie theaters and bars will be closed. Playgrounds, museums and zoos will be closed as well.

Retailers, including grocery stores, will remain open, but capacity will be limited to 20%. Schools that are currently open will be allowed to continue in-person learning. Places of worship will also be allowed to stay open, but only for outdoor services.

“Staying home for three weeks is a sacrifice, but if every Californian did that for a month, we could stop this disease in its tracks,” said Dr. Erica Pan, the state’s acting public health officer, when the restrictions were announced. “This public health order strikes the balance between saving lives, providing essential services that we all rely on and still allowing Californians to participate in lower-risk outdoor activities that are crucial for our physical and mental health.”

In the three other regions being tracked by the state — the Bay Area, Greater Sacramento and Northern California — ICU capacity was above 21%.

Some areas, however, weren’t waiting for ICU capacity to fall below the state’s threshold. Los Angeles County adopted a stay-at-home order late last month, and on Friday, health officials in five of the 11 counties that make up the Bay Area chose to follow suit. The five counties — Alameda, Contra Costa, Marin, Santa Clara and San Francisco — are home to some 5.8 million residents.

“We must do whatever is necessary in order to get the virus under control,” said San Francisco Mayor London Breed on Friday. “This is about protecting people’s lives. We see how quickly it moves and how devastating the effects. We need to do everything we can to prevent our hospital system from becoming overwhelmed and to save lives.”

The rise in cases hitting California has mirrored the surge currently tearing through the rest of the country. On Saturday, the U.S. recorded 213,875 new cases and more than 2,200 deaths, according to the latest figures from Johns Hopkins University. More than 101,000 Americans were in the hospital, with roughly a fifth of those patients in the ICU.

Despite promise, few in US adopting COVID-19 exposure apps