"Dozens of armed individuals stood outside my home shouting obscenities and chanting into bullhorns in the dark of night."

(Washington) — Michigan Secretary of State Jocelyn Benson says “dozens” of armed protesters descended on her home Saturday night, using megaphones to disrupt what had been a quiet evening with her young son. It was meant to intimidate her, Benson said — adding that it didn’t work.

The crowd was made up of people angry over President Trump’s election loss. They shouted and chanted slogans outside Benson’s house in a Detroit neighborhood, echoing conspiracy theories about the Nov. 3 voting process.

“As my four-year-old son and I were finishing up decorating the house for Christmas on Saturday night, and he was about to sit down to watch How the Grinch Stole Christmas, dozens of armed individuals stood outside my home shouting obscenities and chanting into bullhorns in the dark of night,” Benson said in a statement about the incident. 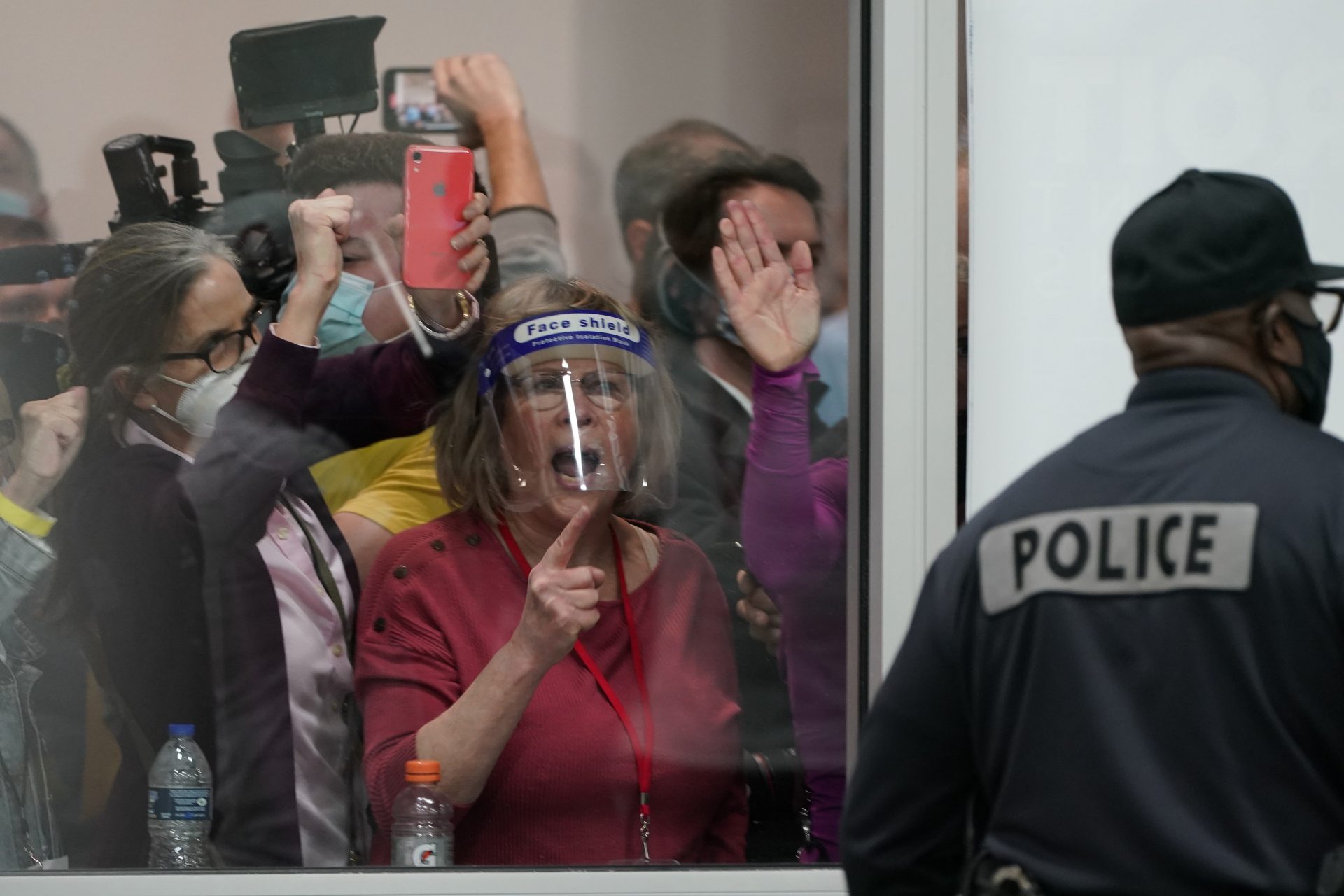 Election challengers yell as they look through the windows of the central counting board as police were helping to keep additional challengers from entering due to overcrowding, Wednesday, Nov. 4, 2020, in Detroit.

A video livestream from the scene that one protester posted to Facebook showed the group lined up along the edge of Benson’s yard, railing against what they insist was a “stolen” election.

“They targeted me in my role as Michigan’s Chief Elections Officer,” Benson said. But she added that the threats shouted outside her home “weren’t actually aimed at me – or any other elected officials in this state. They were aimed at the voters,” because she said they want to overturn the election results.

To reach Benson’s home, the protesters walked past a security car at the end of her block; an officer soon took up a position outside the secretary’s front door. Minutes after the protest began, several police cars also arrived to monitor the situation. The secretary thanked state and local police agencies “who are working to protect my family.”

The incident took place two months after the FBI, as part of a joint operation with state and local police, said it thwarted a plot by militia members to kidnap Michigan Gov. Gretchen Whitmer. Men who were allegedly involved in that plot were recorded repeatedly saying they wanted to kidnap Whitmer before the national election.

LANSING, MI – OCTOBER 17: The Boogaloo Boys stand on the steps of the Capitol Building during a rally on October 17, 2020 in Lansing, Michigan. The Boogaloo boys called it a Unity Rally in an attempt to distance themselves from the Wolverine Watchmen who plotted to kidnap Michigans Governor Gretchen Whitmer. Two of the men arrested in the plot were affiliated with the Boogaloo Boys.

Outside Benson’s home on Saturday night, “at least one individual could be heard shouting ‘you’re murderers’ within earshot of her child’s bedroom,” Michigan Attorney General Dana Nessel said in a joint statement with Wayne County Prosecutor Kym Worthy.

“This mob-like behavior is an affront to basic morality and decency,” Nessel and Worthy added.

Genevieve Peters, a protester who posted video online, said her group wants a forensic audit of the vote, refusing to accept the results of what they call a “fraudulent election.” In her video, a fellow protester tells two police officers that the group planned to leave the house by around 10 p.m.

“We’re not here to do anything,” the man tells the officers. “We’re just here to get attention” for their grievances, “because that’s what we’ve got to do.”

But Benson, Nessel and Worthy said the protesters went too far, targeting an elected official at her private home rather than airing their opinions through civil means.

Late in the video, Peters seemed to promise more protests.

Michigan’s Board of State Canvassers voted two weeks ago to certify the state’s election results of a win for Democrat Joe Biden, despite Trump’s repeated attempts to overturn the outcome. On that day, Benson proclaimed, “Democracy has prevailed.”