Jeremiah Young, 11, right, listens as Dr. Janice Bacon, a primary care physician, with Central Mississippi Health Services explains the necessity of receiving inoculations prior to attending school, Aug. 14, 2020, while at the Community Health Care Center on the Tougaloo College campus in Tougaloo, Miss. As a Black primary care physician, Bacon has created a safe space for her Black patients during the coronavirus pandemic. 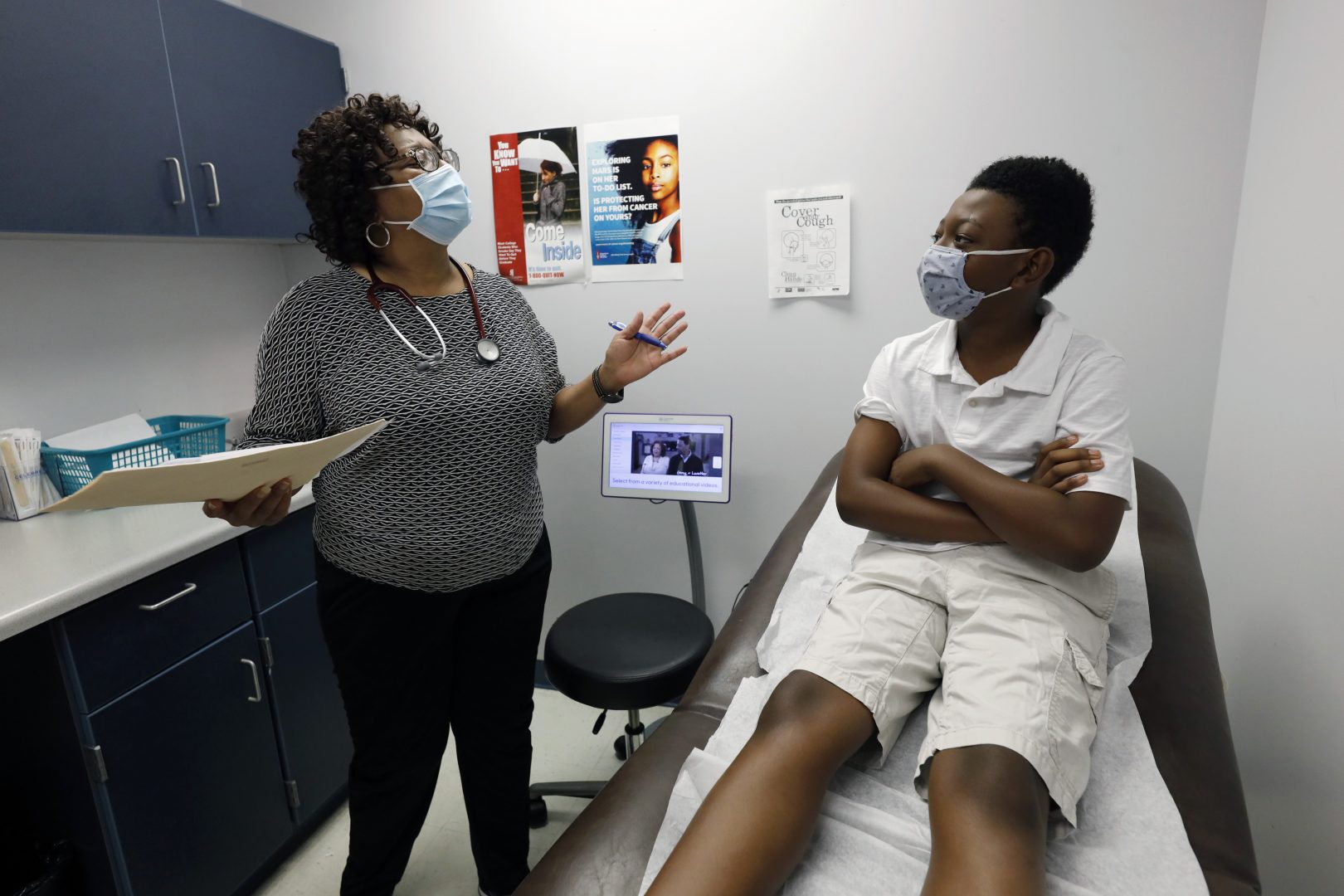 Jeremiah Young, 11, right, listens as Dr. Janice Bacon, a primary care physician, with Central Mississippi Health Services explains the necessity of receiving inoculations prior to attending school, Aug. 14, 2020, while at the Community Health Care Center on the Tougaloo College campus in Tougaloo, Miss. As a Black primary care physician, Bacon has created a safe space for her Black patients during the coronavirus pandemic.

(Reading) — Drug companies are on the verge of releasing coronavirus vaccines to the public, but getting Black people and Latinos to trust the vaccine is yet another hurdle in the pandemic that has affected people of color the most.

A new study by the COVID Collaborative, a nongovernmental group of researchers and health experts, shows around a third of Latinos and only 14 percent of Black people say they mostly or completely trust a vaccine.

The study also showed people of color are more likely to trust messages about the vaccine from someone of their own ethnicity.

“Our strongest line of reaching those citizens is through the agencies and the individuals that they trust and that they spend the most amount of time with,” said Vicky Kistler, director for the Health Bureau of the Latino-majority city of Allentown. “So we make sure that our messaging as much as possible gets funneled through to those individuals and we ask them for partnership.”

Black people and Latinos are hospitalized for COVID-19 at a rate nearly five times higher than white people, according to the Centers for Disease Control and Prevention. Black people are twice as likely as white people to die from the virus.

Black people make up only 14 percent of Allentown’s population and similarly 12 percent in Reading, where Latinos are also the majority.

The Rev. Bruce Alick is the president of Pennsylvania Baptist State Convention and the pastor of Zion Baptist Church in Reading, where his congregation of around 175 parishioners are mostly Black.

Clergy, in general, have long been a bridge of communication to reach the Black community, he said.

Zion Baptist Church has a health ministry that has hosted health fairs before the pandemic. During the pandemic, the church has moved virtual sermons and has served as a free COVID-19 testing site.

The Berks Community Health Center sets up a tent in the church’s parking lot once a week and around 400 people have used the testing site, Alick said.

Alick said he is not going to push the vaccine on the members of his church, but let them make that choice for themselves.

He said there is a long history of generational trauma tied to medical experimentation and mistreatment of the Black community in the United States that has fostered mistrust.

The survey found Black people were less likely to trust vaccines if they had knowledge of the Tuskegee Syphilis Study, the unethical 40-year study where Black men were not treated for the disease so their deteriorating physical conditions could be monitored.

“The Tuskegee experiment is probably the most notorious, but there are others,” Alick said.

“And so there’s reasonable suspicion of a vaccine, something that would take eight to 10 years maybe, to get developed all of a sudden.”

Kistler said community health organizations need to be transparent and proactive in sharing information about the vaccine.

“I think we have a lot of work ahead of us, for people to have faith in this vaccine, we need to explain very clearly how a fast tracked vaccine can be safe, and why the fast tracking occurred,” Kistler said.

Dr. Mary Kelleher is the chief medical officer at the Berks Community Health Center, and she is very familiar with Black and Latino people’s mistrust of healthcare providers.

The hesitancy to consult with medical professionals is a common comedic trope among Latinos and is also echoed in data.

The study also found that Latinos are less apt than Black people to have health insurance and significantly less likely (only 46 percent) to have seen a doctor in the past year.

Kelleher said that some immigrants do not have a regular healthcare provider, which exacerbates the problem.

“Sometimes they come from countries where the only way they could access care, is to go to a public health clinic and sit for hours and get access to care,” Kelleher said. “And then there are others who really, really delay entry to care, until they’re so sick, that they’ve already got some of the complications that come with delaying entry to care.”

Reading Hospital has the busiest emergency room in the state and 10th busiest in the country.

The study found half of both Black people and Latinos trust Dr. Anthony Fauci the highest out of six government institutions and individuals.

The administration of President Donald Trump was the least trusted institution by both groups. About one in five Latinos trusted the Trump administration as compared to only 4 percent of Black people.

Kelleher, who identifies as a white Latina, said she can empathize as a doctor because of the Trump administration’s politicization of the pandemic.

“I found myself being a doubter, like, ‘I don’t know if I get this vaccine,’ and so I could identify with that mistrust,” she said. “I gained back [the trust] in people that I respected and people that were leading the process … They had to show me that they were studying it, and then show me it was effective, show me that it could be successful.”