Baltimore Ravens tight end Mark Andrews (89) reacts after scoring on a touchdown pass from quarterback Lamar Jackson, not visible, during the second half of an NFL football game against the Tennessee Titans, Sunday, Nov. 22, 2020, in Baltimore. Titans' Amani Hooker (37) and Malcolm Butler (21) look on. (AP Photo/Nick Wass) 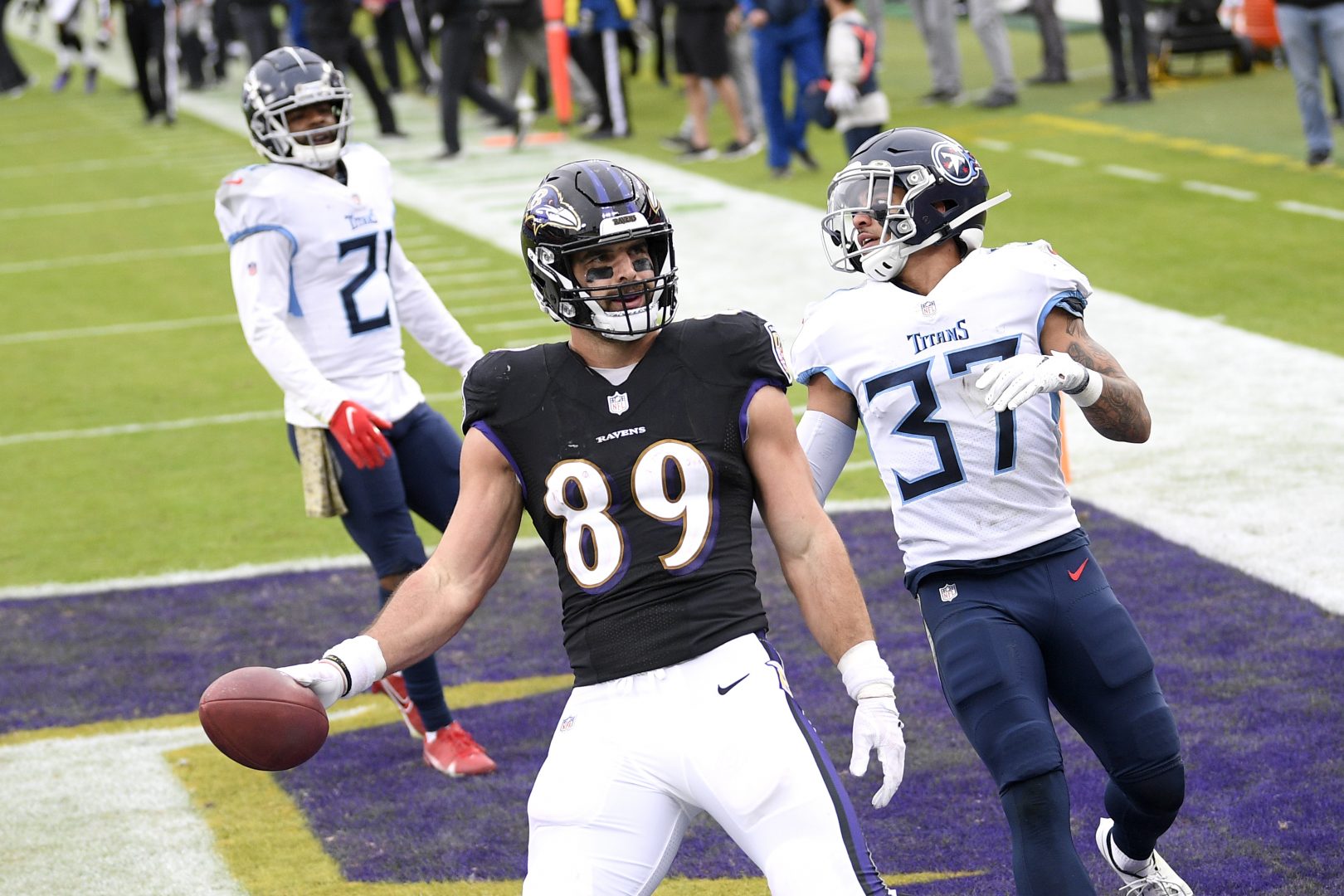 Baltimore Ravens tight end Mark Andrews (89) reacts after scoring on a touchdown pass from quarterback Lamar Jackson, not visible, during the second half of an NFL football game against the Tennessee Titans, Sunday, Nov. 22, 2020, in Baltimore. Titans' Amani Hooker (37) and Malcolm Butler (21) look on. (AP Photo/Nick Wass)

(Pittsburg) – The Baltimore Ravens’ struggle to contain an extended outbreak of the coronavirus forced their rescheduled game Tuesday night against the unbeaten Pittsburgh Steelers to be moved back to Wednesday.

It’s the third fix to a matchup originally slated to be played Thanksgiving night.

The NFL announced the most recent switch Monday after the Ravens placed starters Matthew Judon, Willie Snead and Mark Andrews on the reserve/COVID-19 list.

Although Baltimore also had four players return from that list, the team will still be severely short-handed when this game is finally played.

The addition of Judon, a standout linebacker, and Andrews, the leading receiver on the team, brings to seven the number of 2019 Pro Bowl players that Baltimore has placed on the COVID-19 list over the past week.

There was a bit of good news, however: Baltimore activated linebacker Jayson Ferguson, offensive lineman D.J. Fluker and defensive tackle Broderick Washington from the COVID-19 list. Defensive back Iman Marshall was also activated, although he’s been on IR since tearing his right ACL in August.

The contest pitting two longtime rivals was originally scheduled for Thanksgiving night before a rash of coronavirus cases among the Ravens forced the game to be postponed to Sunday. As Baltimore continued to stack up positive tests, the game was moved back to Tuesday night.

Now, perhaps, they’ll finally meet on Wednesday in Pittsburgh. Or not.

The Ravens (6-4) will face the Steelers without several of their top playmakers, including quarterback Lamar Jackson, running backs Mark Ingram and J.K. Dobbins, and defensive linemen Calais Campbell and Brandon Williams.

The loss of Andrews and Snead will further hinder backup quarterback Robert Griffin III, who will be taking snaps from a third-string center after Patrick Mekari and Matt Skura were placed on the COVID-19 list on Wednesday.

Andrews is a Type-1 diabetic, which makes COVID-19 potentially more dangerous. His loss should have an impact in that he leads Baltimore in receptions (38), yards receiving (454) and touchdown catches (6).

Andrews, Judon, Jackson, Ingram, Campbell, fullback Patrick Ricard and long snapper Morgan Cox were all selected to the Pro Bowl last season. Jackson, of course, was the NFL’s MVP in 2019.

Judon owns Baltimore’s franchise tag. He is tied for the team lead with four sacks and has 34 tackles.

Snead has 17 catches for 230 yards and two touchdowns over the past four games.