Pa. counties reported no major issues with Dominion voting machines, a target of Trump and his campaign

Of the six counties that responded, representatives from five said they were satisfied with the machines and had little or no problems during the November election or past elections. 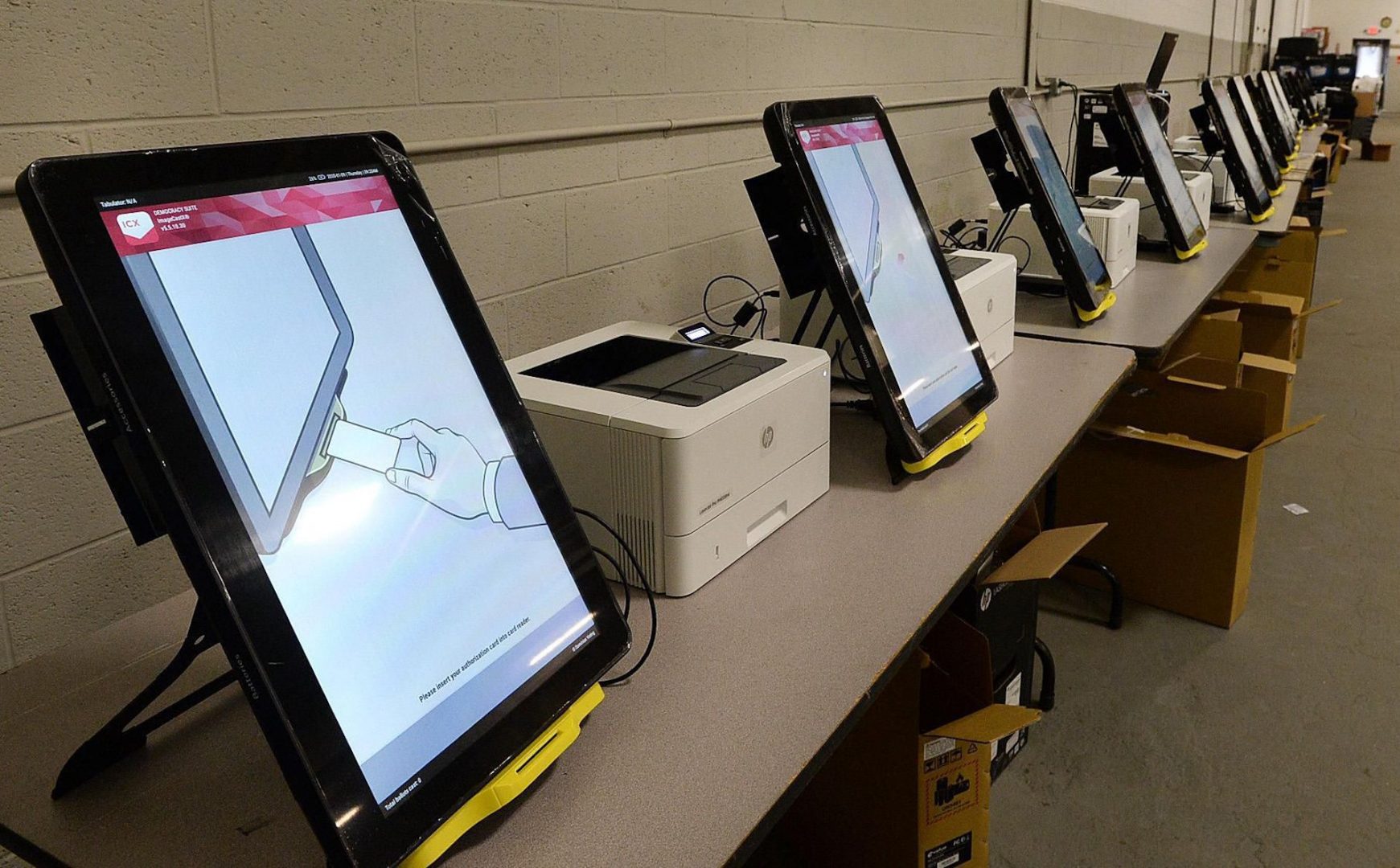 (Harrisburg) — In their latest attempt at sowing doubt in Pennsylvania’s 2020 election, a group of state Republicans has latched onto rhetoric coming from President Donald Trump and his legal advisers about voting machines used in 14 counties during the November election.

Trump, his campaign lawyer Rudy Giuliani, and attorney Sidney Powell have without evidence accused Dominion Voting Systems of deleting and switching votes, despite a report from a federal agency that found no proof the machines were compromised “in any way.”

Now, state Republicans including Reps. Seth Grove (R., York) and Dawn Keefer (R., York) have begun echoing Trump’s distrust of Dominion’s machines, despite the fact that Trump won in 12 of the 14 Pennsylvania counties that use the company’s devices. Trump lost to President-elect Joe Biden in the state by more than 81,000 votes.

Spotlight PA and Votebeat reached out to officials in the 14 counties that use Dominion’s systems. Of the six counties that responded, representatives from five said they were satisfied with the machines and had little or no problems during the November election or past elections. Officials from the sixth county said there was some voter confusion about how to use the machines.

Experts and officials acknowledge the systems aren’t always glitch-free, but say issues are caught thanks to Dominion’s paper trail.

During a press conference at the state Capitol on Nov. 20, Grove said representatives from Dominion were supposed to speak with the House State Government Committee to publicly address a “plethora of accusations” and have an “open and honest dialogue” about how those machines worked. He didn’t say what those accusations were.

In an emailed statement, Dominion Government Affairs Vice President Kay Stimson said Dominion had agreed to discuss the fact that the counties using their machines “enjoyed a smooth and successful election.” But the company asked to postpone the meeting following a press conference Giuliani held earlier this month, where he teased forthcoming litigation.

“As we await the opportunity to debunk the baseless conspiracy theories being offered about Dominion and its voting systems in a court of law, we had to ask for a postponement of the discussion,” Stimson said, adding Dominion would gladly schedule another meeting with legislators following the resolution of any litigation.

Grove said voters should be disappointed that Dominion “lawyered up and backed out” of the meeting without providing any answers to questions lawmakers had, such as what role it played in counting votes, who programmed the software, and whether tests were done on the machines.

“If they have nothing to hide, why are they hiding from us?” he said.

Dominion has denied what it says are “unfounded” allegations, including that votes for Trump were deleted or switched to Biden votes.

Many of the questions Grove and Keefer said they wanted to ask Dominion have been answered already by experts and election officials — and in some cases, by the lawmakers themselves in state law.

State lawmakers lay out the bare necessities that a voting machine must have in the election code. Those include making sure the machines allow voters to write in candidates, change their votes before casting the ballot, and vote in secret. The code also mandates how and when machines should be stored and secured and by whom, although lawmakers left many of the decisions, including who has custody of the machines when not in use, to the county boards of elections.

State lawmakers also mandate that any voting systems be certified by the federal and state governments.

The federal certification involves testing the machines in an accredited laboratory. The systems are checked to see if they provide all the basic functionality, accessibility, and security capabilities required, said Tammy Patrick, a senior advisor to the elections team at the Democracy Fund. The standards are set by the U.S. Election Assistance Commission.

At the state level, Secretary of the Commonwealth Kathy Boockvar certified Dominion’s machines in early 2019 after they were examined by third party consultants — SLI Global Solutions and the Center for Civic Design — while Department of State and Dominion staff attended.

“The tests that a voting system has to go through are exhaustive and very, very thorough,” Patrick said. In addition to a line-by-line review of the code, machines are examined in various ways, including to see how they hold up under extreme temperatures or whether they’re accessible to people with impairments, she said.

Once the equipment is certified, county officials perform logic and accuracy testing on the machines to make sure the details of the election are loaded onto the machine properly and the machine is accurately counting votes, Patrick said. Sometimes county officials will have support staff from the vendors available in person or by phone during the testing.

After each election, counties are required to perform a statistical recount of 2% of ballots cast or 2,000 votes — whichever is less — before results are certified to ensure voting machines were working properly and results are accurate.

And last year, the Department of State began piloting risk-limiting audits — a process that verifies whether a sample of paper ballots matches results captured electronically by voting machines — as part of a settlement with 2016 Green Party presidential candidate Jill Stein, who sued after seeking a recount. Boockvar said such audits would be performed again for the 2020 general election.

As part of that same settlement, counties had until December 2019 to select new machines that offered backup paper ballots that could be hand counted if a machine was compromised. Counties had to pick from a list of five companies whose machines were certified by the state and federal government in January 2019. State lawmakers agreed to give counties $90 million to help pay for the new machines.

Fourteen counties chose two Dominion voting machines that work together. One is a touch screen ballot-marking device that prints out a ballot with a summary of the voter’s selections, and the other is the ImageCast Precinct Scanner, where the ballot — either marked by hand on paper or printed from the touch screen — is fed into a tabulation machine.

The other 53 counties use machines manufactured by Election Systems & Software, Hart InterCivic, Clear Ballot, or Unisyn Voting Solutions, which were also certified by the federal and state government.

Before officially contracting with the company, many counties held open houses for people to view and test the machines.

“What it came down to on our end was the interest in having a voter-marked paper ballot,” said Lee Soltysiak, Montgomery County’s chief operating officer and chief clerk of the election board. “That was ultimately what carried the day, and it’s what we heard from the public who weighed in on the various options that were out there.”

He said other than an issue experienced with the machines in Hatboro in 2019, voters were “very satisfied” with the machines. In the 2019 primary, he said a ballot question got moved around during a reprogramming of machines before Election Day, and Dominion scanners misread the ballots.

“The good news is, we knew when it was discovered on Election Day, we had the paper ballots to back up the votes, and we were able to [do a] hand recount and get an accurate count of what the voter intent was in that municipality,” he said. “The heart of the system is what allowed us to go back and ultimately see what the votes were.”

In Luzerne County, several council members said an unknown number of voters accidentally walked out with their ballots in hand during the November election after making their selection on the touch screen, not realizing the ballots then had to be scanned into a separate machine and thinking the ballots were a “receipt” of their vote.

Harry Haas, a Republican county council member, said he thought it was a mistake to introduce new voting machines during an “already confusing” election.

Republican Council Member Stephen Urban said he didn’t like the machines — recommended by County Manager David Pedri, of whom Urban is a vocal critic — and would’ve preferred a machine that automatically cast the ballot after voters made their selections.

“People in Erie County are confident in the outcome of the election,” said Erie County Board of Elections Chair Carl Anderson III. He said elections board members chose Dominion because they wanted the option in future elections to use the paper scanner with hand-marked paper ballots rather than a touch screen and its printed ballots. Erie County first used the Dominion machines during the June primaries.

“By the way, if all of these complaints were happening, how come they didn’t occur in the primary?” Anderson said.

He called the Republicans’ rhetoric against Dominion a “last-ditch effort” at changing an outcome that didn’t go their way.

“To make accusations that — just because you didn’t get what you wanted — that the whole system and the whole process is somehow fraudulent or not accurate is absolutely the most irresponsible public thing that an elected servant can do,” he said.

Notably, Dominion machines weren’t used in the counties that Trump has falsely claimed rigged the election: Allegheny and Philadelphia, where voters cast ballots in large numbers for Biden.