Steelers looking for a perfect 10 against skidding Jaguars

Ten of the past 12 meetings between Pittsburgh and Jacksonsville have been one-score games.

(Jacksonville, Fla.) — Pittsburgh and Jacksonville have played some real nail-biters.

Ten of their past 12 meetings have been one-score games, including several decided on the final drive and a few on the final play.

The past two might have been the best between the former AFC Central foes, with Jacksonville winning a 45-42 shootout in Pittsburgh in the 2017 playoffs and the Steelers overcoming a 16-point deficit in the second half and scoring on their final play to pull out a 20-16 road victory 10 months later.

The undefeated Steelers (9-0) visit reeling Jacksonville (1-8) on Sunday, a matchup of one of the NFL’s most quintessential franchises and one of its most dysfunctional. 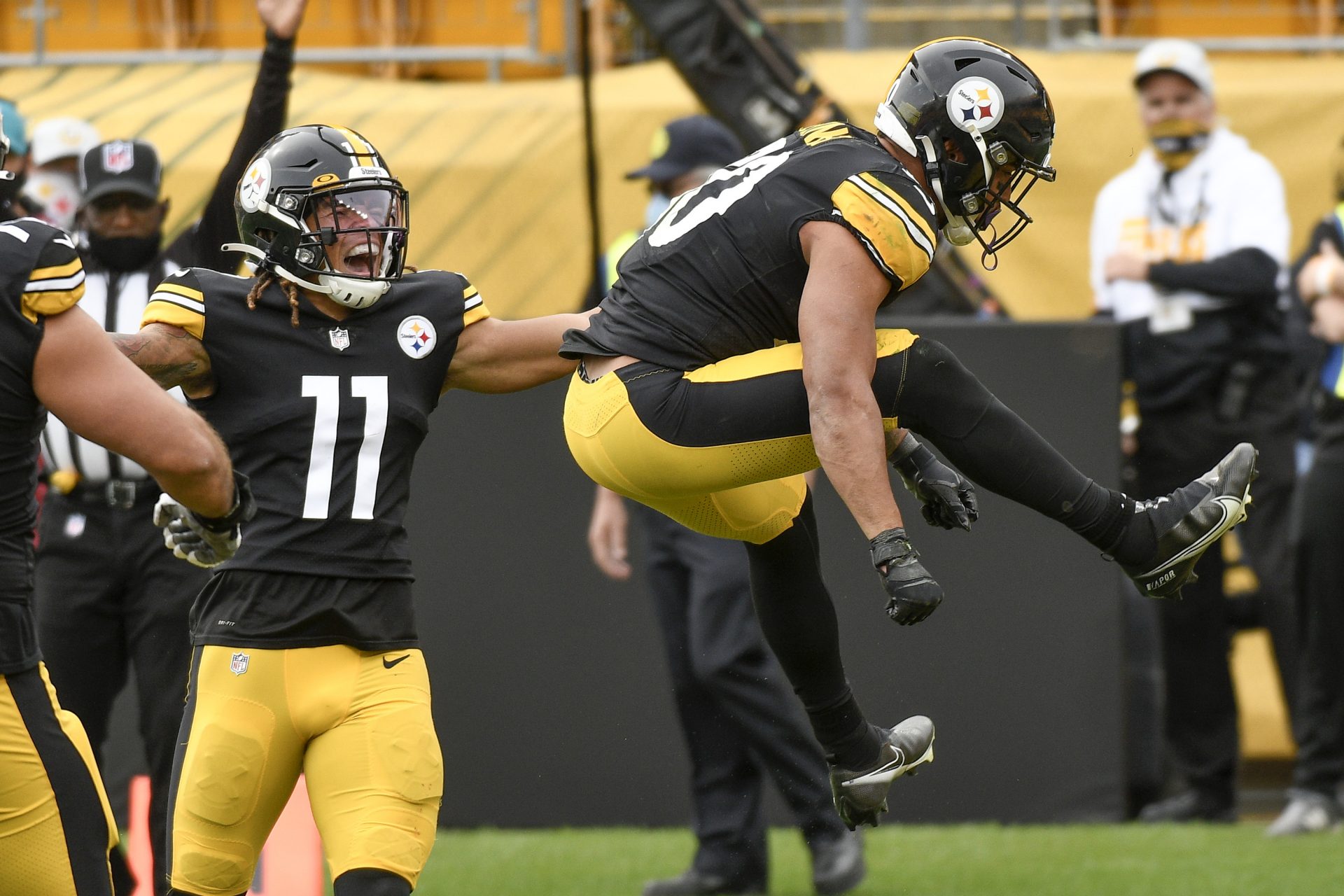 Pittsburgh Steelers running back James Conner (30) leaps after scoring a touchdown against the Cleveland Browns during the first half of an NFL football game, Sunday, Oct. 18, 2020, in Pittsburgh. Steelers wide receiver Chase Claypool (11) also reacts.

“It’s been fortunate that the games have been tight, but we have a lot of challenges this week in all three phases,” Jaguars coach Doug Marrone said.

The Steelers are trying to get to 10-0 for the first time in franchise history. They are the 21st team since the 1970 merger to start 9-0. All 20 previous teams reached the playoffs, with seven of them winning the Super Bowl.

“They have a lot at stake,” Marrone said.

The Jaguars have lost eight in a row since stunning Indianapolis in the opener, leaving them one shy of tying the single-season franchise record. Owner Shad Khan fired then-coach Gus Bradley following his ninth straight loss in 2016.

The Jaguars are 41-99 in Khan’s nine-year tenure. A loss Sunday would tie him with former New Orleans Saints owner John Mecom Jr. as the second fastest to reach 100. Khan would hit the dubious mark in 141 games, one more than late Tampa Bay Buccaneers owner Hugh Culverhouse.

The positives for Jacksonville: the team played well in its past two loses and had chances to upset Houston and Green Bay, and the Jaguars have traditionally played Pittsburgh tight. The Steelers have won their past three trips to Jacksonville, but each has been decided by a touchdown or less.

Pittsburgh, though, is a 10-point favorite this time around.

“We’re not playing Jimmy Smith and Keenan McCardell, and they’re not playing Hines Ward and Jerome Bettis, so none of that is very relevant,” Steelers coach Mike Tomlin said. “We respect the challenge that’s 2020, and that’s what we’re getting ready for.” 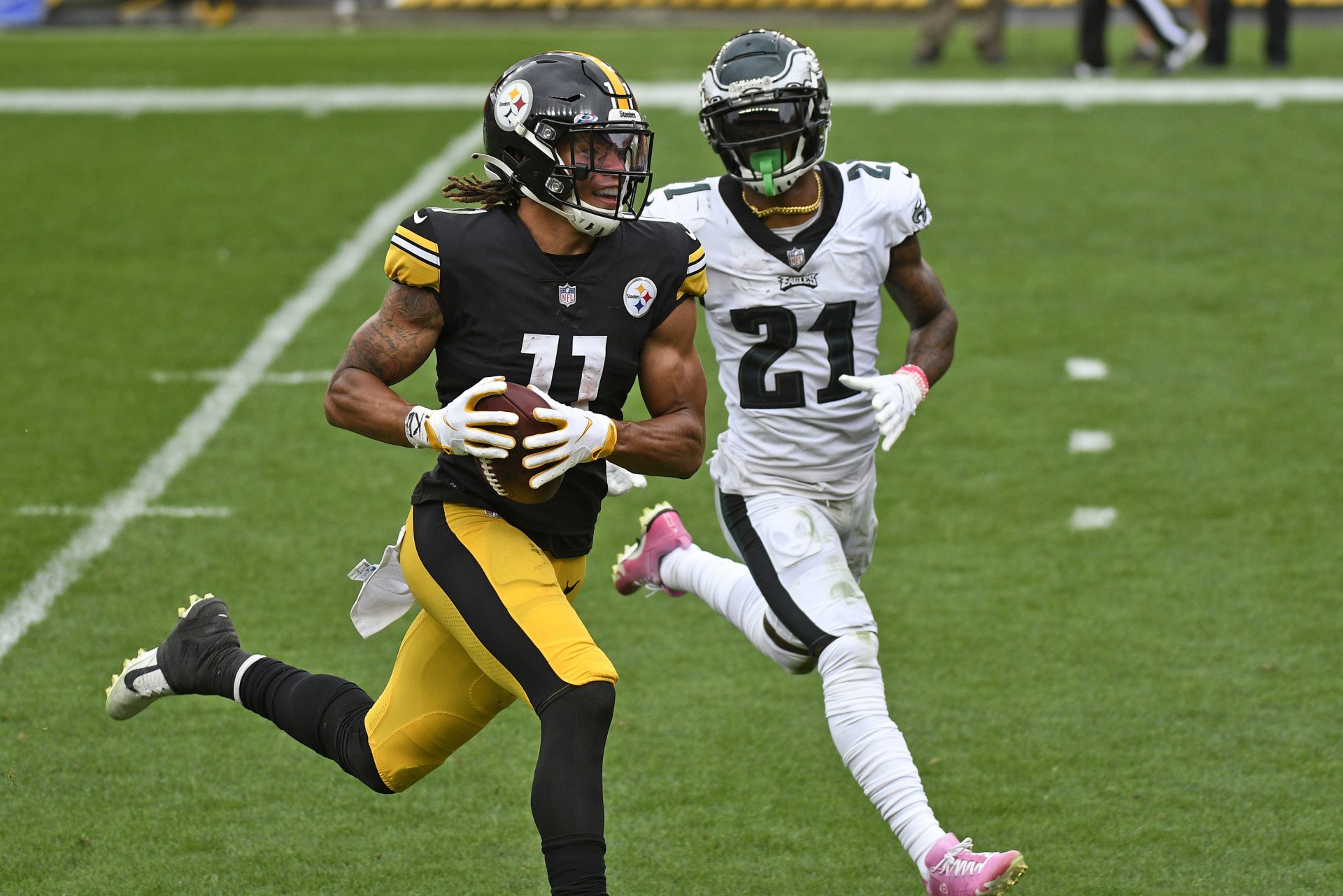 Pittsburgh Steelers wide receiver Chase Claypool (11) beats Philadelphia Eagles strong safety Jalen Mills (21) to the end zone for a touchdown during the first half of an NFL football game in Pittsburgh, Sunday, Oct. 11, 2020.

ON THE RUN, PART I

Pittsburgh’s defense has developed a surprising weakness over the past month: an inability to shut down the run. The Steelers were second in the league in fewest rushing yards allowed over the first five games, giving up just 66.2 yards.

That number has more than doubled to 157.5 yards over the past four weeks. Cincinnati averaged more than 5.0 yards a carry against Pittsburgh last week, providing a blueprint of sorts for a Jacksonville offense that will rely on rookie running back James Robinson to take some pressure off rookie quarterback Jake Luton, who will make his third start.

“It’s up to us to stop the run,” Steelers defensive end Cam Heyward said. “With a younger quarterback, you tend to lean more on the run. They’ve got a lot of road graders in the offensive line that do a good job. So it’s going to be up to us to really set the tempo, get off the run early, put them in advantageous situations for us.”

The Steelers aren’t just having issues stopping the run, they’re having trouble generating any sort of momentum on the ground on offense. While Roethlisberger has been able to pick up the slack — throwing for four touchdowns last week against the Bengals — Tomlin is well aware his team’s running game needs to take a significant step forward after failing to go over 50 yards rushing in any of their past three games.

“We are not up to snuff right now,” Tomlin said. “We accept ownership for that. We are going to roll our sleeves up and solve it.”

The Jaguars are counting on special teams to help close an apparent talent gap on both sides off the ball. The units helped give Jacksonville a chance the past two weeks.

Keelan Cole had the longest punt return in team history, a 91-yarder for a score against the Packers. Logan Cooke dropped five punts inside the 10-yard line the past two games, including three inside the 5. And Chase McLaughlin seemingly stopped the team’s season-long place-kicking carousel by making every kick last week, including a 52-yard field goal.