Quairah Tucker of Upper Darby, Delaware County, voted by provisional ballot on Nov. 3 -- and then had her ballot challenged by the Trump campaign as it sought to invalidate some ballots in Pennsylvania. The campaign ultimately withdrew its challenge to her ballot. 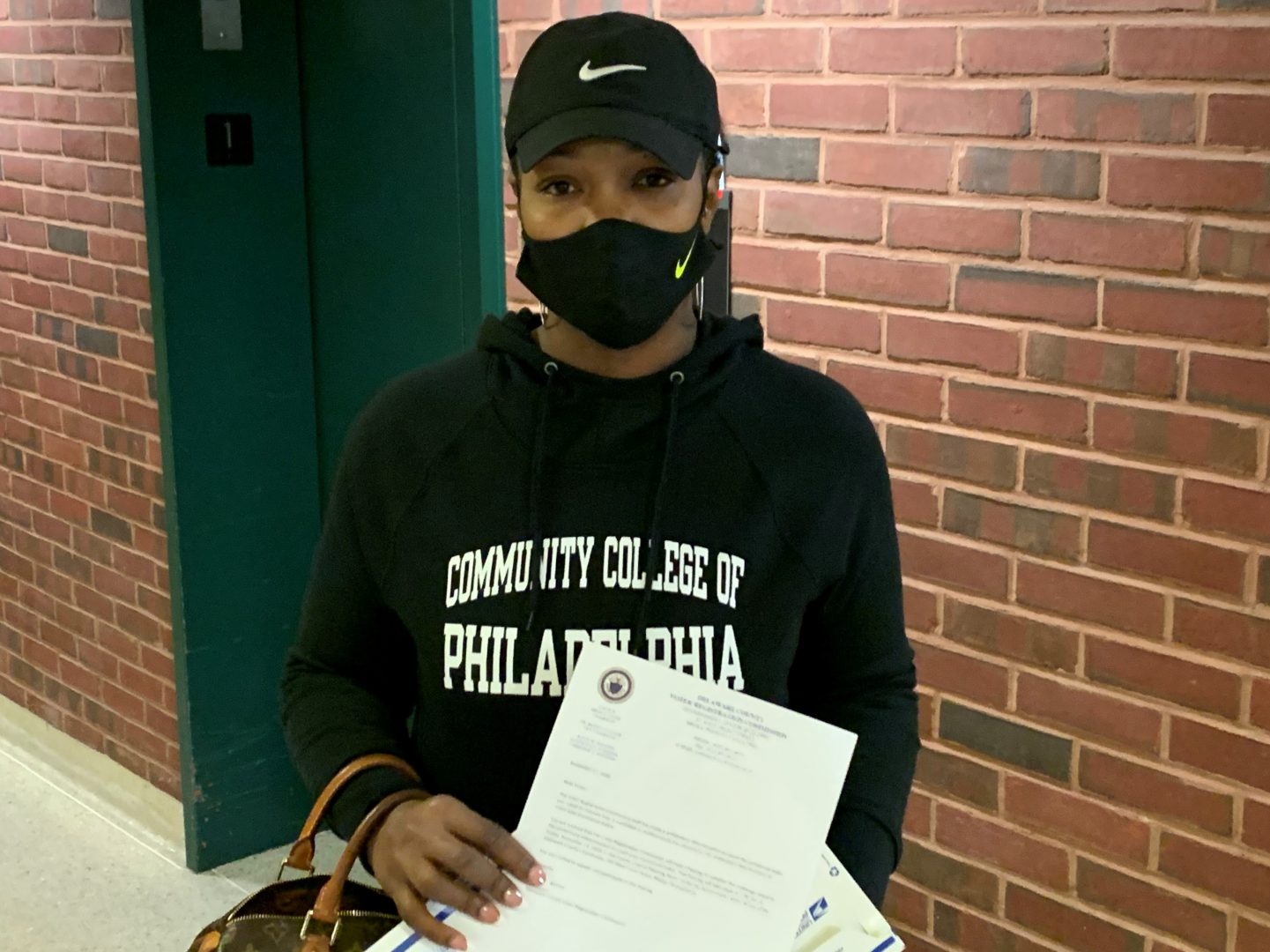 Quairah Tucker of Upper Darby, Delaware County, voted by provisional ballot on Nov. 3 -- and then had her ballot challenged by the Trump campaign as it sought to invalidate some ballots in Pennsylvania. The campaign ultimately withdrew its challenge to her ballot.

(Media) — Quairah Tucker votes in every election, but this year brought a lot of firsts.

She’s one of millions of Pennsylvanians issued a mailed ballot. Since hers never arrived, Tucker was among more than 100,000 who voted provisionally at the polls.

More than a week later, she received a letter in the mail, saying her ballot was being challenged.

“When I was at the polling place, I thought that my vote counted,” Tucker said. “I didn’t expect to have to come in and fight for my rights, for my vote counting.”

Tucker and more than 1,000 other Delaware County voters had their provisional ballots challenged by the Trump campaign for any number of reasons: signing in the wrong spot, using the wrong date, failing to seal the ballot envelope properly and so on. In Tucker’s case, she put her name in one spot, but not the other where voters are supposed to sign.

“I filled out the ballot, like I was told to do. I was instructed to only fill out one box. And I guess that was not enough,” she said.

The campaign has challenged thousands of provisional ballots in several majority-Democrat counties, including in Northampton, Montgomery, Chester and Allegheny. That’s in addition to its unresolved lawsuits in courts across the commonwealth. Plus, the petition before the U.S. Supreme Court initiated by Pennsylvania Republicans — which the Trump campaign has since joined — could invalidate about 10,000 ballots that arrived after polls closed on election night and before 5 p.m. on Nov. 6.

Since Election Day, the campaign has initiated at least two dozen cases in five states, and most of those cases are in Pa. They challenge election procedure, in addition to contesting provisional ballots. Millions of votes initially hung in the balance, but that number has plummeted because most of the campaign’s legal efforts have failed or been abandoned.

Listen to the story:

Tucker, 32, of Upper Darby, said she was closely following those cases even before she learned the Trump campaign had challenged her ballot. She plans to continue to do so, even though Joe Biden is president elect and the campaign’s lawyer last week withdrew his challenge for her ballot, as well as for the vast majority of the others in Delaware County.

“Honestly, with all this going on, challenging most of the Democratic votes – I can’t just go with how it looks right now,” she said.

Michael Latner, a political science professor at California State Polytechnic University, said the campaign is challenging provisionals in other states — like Nevada and Arizona — as well.

“They’re challenging every ballot that they can, if they can come up with any reason. They’re doing it to slow the process, more than to win any legal victories,” Latner said.

“Someone’s going to win this election, in every race, and someone’s going to lose it,” he said. “And it is important for us to determine the winner and loser, as it is for us to give the people who lost a sense that the election was fair, and that objections were reasonably heard (and) disposed of properly. If we don’t do that, it’s harder for the victors to rule legitimately.”

But election officials from both parties say voting went well and was secure, as do international observers and the Department of Homeland Security.

“People are selective with their attention, but the fact the we’re putting such a close microscope on some of these main cases — whether it’s Detroit or Philadelphia, or Las Vegas – the fact of the matter is that for those who really care, there is evidence that that our local election officials are doing a pretty good job, given the challenges that they face,” Latner said.

He said it’s increasingly unlikely – approaching impossible – that Trump will litigate his way to a second term as his legal efforts are tossed out of court or ditched, and as more ballots are counted that expand Biden’s margins.

Over the weekend, the campaign’s lawyers dropped one of its top claims in its latest federal lawsuit involving the election in Pennsylvania. It previously alleged its observers didn’t see nearly 700,000 ballots processed in Philadelphia and Allegheny counties. The case is due in federal court Tuesday in Williamsport.

“The best hope was to invalidate enough votes to outright claim victory for the Trump administration,” Latner said. “Or – and I think this is where we’re at now –gumming up the works long enough to justify some intervention on the part of the state legislators. Although I think it’s increasingly clear – now that Biden is winning by a big enough margin in Pennsylvania and in those other states – you’ve now even seen the GOP state legislators come out and say that they’re not going to intervene. So, it’s kind of game over.”

Judges have ruled against the campaign at every turn so far in Pennsylvania and in other contested states like Michigan, Georgia, Arizona and Nevada.

An exception is last week’s ruling that Pa. Secretary of State Kathy Boockvar wasn’t authorized to give voters who cast provisionals extra time to provide proof of identification. The decision is expected to impact just a few ballots.

Also last week, a federal judge dismissed a lawsuit seeking to invalidate late-arriving ballots — though the same ballots are at issue in that petition before the U.S. Supreme Court.

The campaign’s track record has been similar for provisional ballot challenges so far, according to attorney Stacey Rabbino, a lawyer for advocacy organization Pennsylvania Voice. She attended last week’s hearings in Delaware County.

The campaign has until Monday to revive withdrawn challenges to provisionals in Delaware and Northampton, or to appeal election board decisions on whether to count those the campaign didn’t challenge.

Although provisionals are challenged after every election, that’s happening at an unprecedented volume right now due to the rapid shift to voting by mail and the Trump campaign’s decision to contest them en masse. Counties’ voter notification policies have varied and at times caused confusion, according to Kehinde Whetstone, east region organizer for advocacy organization One PA.

“If you’re unsure whether your ballot is being contested, … people in my network are telling me they don’t have any way to find out. And they’re going to courthouses. They’re going on the ground in the midst of a virus. They’re trying to find out what’s happening with their ballots. And it’s very difficult to get the information,” Whetsone said. “There are definitely some good faith efforts going on by folks who work there to try to get the proper information out, [but] that information is not going out seamlessly, and people are confused.”

Some counties are just getting to the point where provisionals could be challenged.

That includes Bucks County and Philadelphia counties, where the campaign filed suits unrelated to provisionals.

One targeting 8,000 Philly ballots was dismissed Friday, but the campaign appealed Saturday.

Another, over the city’s canvassing rules, is pending before the state Supreme Court. It appeals a Commonwealth Court decision in favor of the Trump campaign. Two lower courts had earlier sided with the city.

The Bucks case, which goes to court Tuesday afternoon, contests the validity of just 76 ballots.

As of Sunday night, Trump was losing by 69,000 votes in Pennsylvania of nearly 6.9 million cast, and with more than 87,000 mailed, provisional and late-arriving ballots still uncounted.