A "for rent" sign is posted outside an apartment in Pittsburgh.

(Pittsburgh) — A statewide rental assistance program meant to aid both landlords and tenants struggling due to the coronavirus pandemic still has more than $130 million left unspent, according to numbers released last week.

“We anticipate there will be unused funds,” at the end of November when the money must be spent, said Scott Elliott, a spokesperson for the Pennsylvania Housing Finance Agency.

But any unused funds don’t appear to be due to lack of need.

More than 10,000 renters and close to 7,000 landlords had been approved for the program as of November 1, and had assistance paid out, according to statistics released last week.

However, that’s a fraction of the more than 68,000 renters and more than 37,000 landlords who have applied for the aid. Tenants and landlords must jointly apply for the program; money is paid to the landlord.

A total of more $169 million in help has been requested according to PHFA, exceeding the $150 million available for the program.

Elliott said officials are still working hard to get funds out to keep people housed.

“Our goal is for the counties and PHFA to process as many of the remaining submitted applications that we can in the time remaining to help the most Pennsylvanians possible.”

Housing advocates have been concerned for months that the still-shaky economy combined with high unemployment and a worsening pandemic has the potential to push people out of their homes, worsening the ongoing public health crisis.

Pennsylvania’s Rent Relief Program rolled out in July, though it soon became apparent there were roadblocks to quickly distributing money. Among them: a reluctance by some landlords to participate given the caps on monthly rental assistance, a requirement that tenants be in arrears to be eligible, a lag by the state in confirming tenants’ unemployment status, and a number of other bureaucratic hurdles.

When Gov. Tom Wolf, a Democrat, declined to extend an eviction moratorium past the end of August, he asked the Republican-controlled General Assembly to make changes to the program to allow county agencies administering it to get money to those in need more quickly. The state House voted to make some changes to the program, however the state Senate did not take up the bill. The governor made some changes via an executive order, such as allowing the program to continue taking applications until Nov. 4.

If unused funds remain at the end of November, it’s unclear what would happen to the money.

After Nov. 30, PHFA must return remaining funds to the commonwealth. 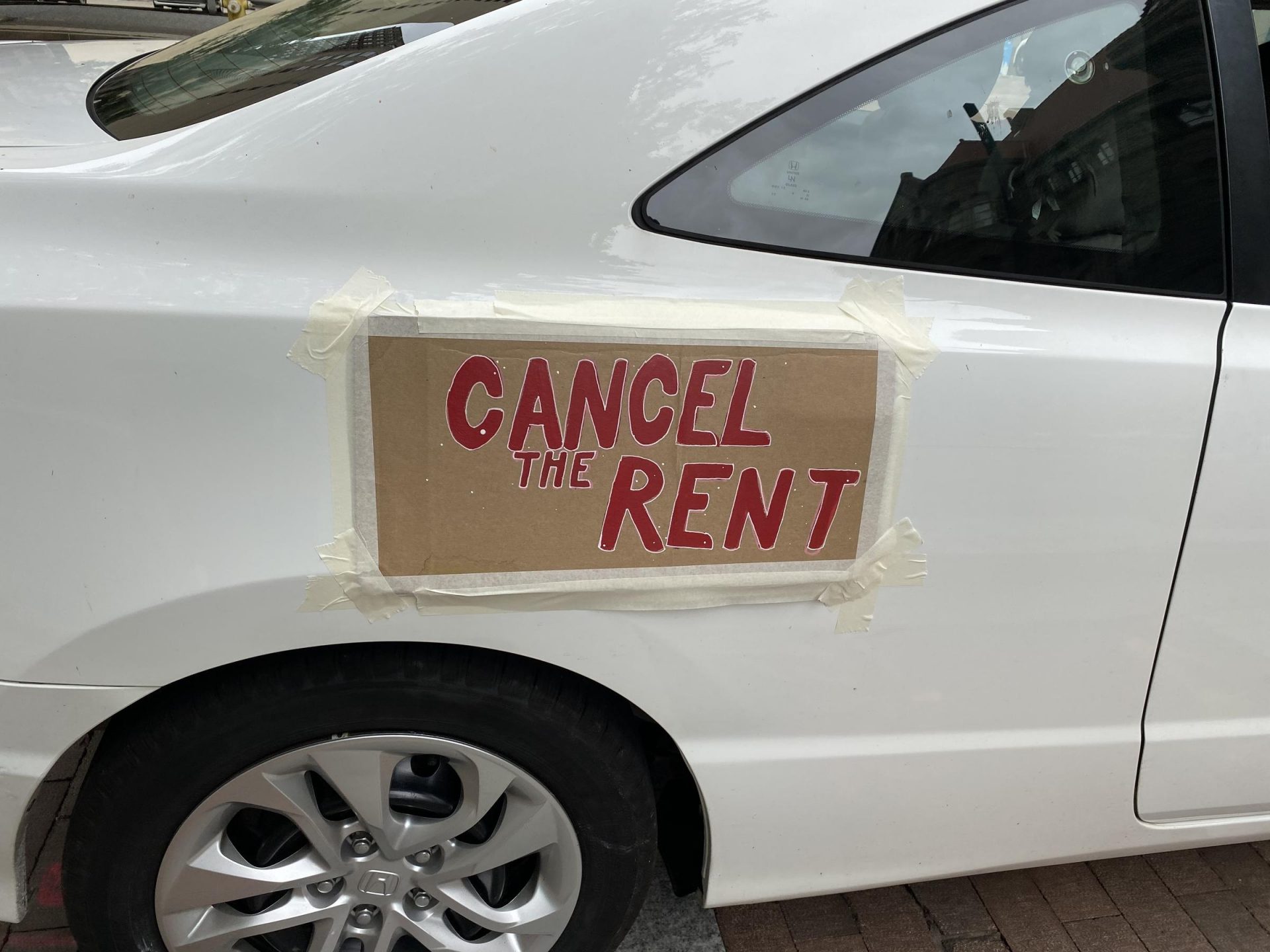 A “cancel the rent” sign is seen on a car at a rally to extend an eviction moratorium in downtown Pittsburgh on Monday, Aug. 31, 2020.

The Commonwealth has until Dec. 30 to use federal coronavirus relief funds, according to the CARES Act.

State lawmakers and the governor must agree to a partial-year state budget by Nov. 30.

An order from the Centers for Disease Control and Prevention has halted many – though not all – evictions until the end of the year. Many housing advocates say the CDC’s order is also not being applied consistently.

“It doesn’t look good for a lot of households who are still unemployed and are still struggling,” said Phyllis Chamberlain, executive director of the Housing Alliance of Pennsylvania.

As many as 15% of the state’s renters could be at risk of eviction by the end of the year, she said, citing a study by the National Council of State Housing Agencies.

More than $3.1 million has been paid out in assistance to Allegheny County landlords, according to county spokesperson Amie Downs. That number will increase as already-submitted applications continue to be processed.

The county and the nonprofit agencies administering the program locally are working to reach individuals who already applied for aid, but whose applications were incomplete or missing key documents, said Abigail Horn, Deputy Director for the county’s Office of Community Services.

Approximately $6.9 million remains unspent in Allegheny County, though county officials say its portion of unspent funds can be used for other aid programs. Allegheny County used some of its federal CARES funds to provide additional assistance beyond the $750 monthly cap in place in most other counties.

Additionally, in Allegheny County, some other assistance programs are still available for those facing eviction and seeking help staying in their homes.

“We have existing resources that will continue beyond this program,” said Horn.

However, that’s not the case in much of the rest of the state.

“There are not very many additional resources to help tenants and landlords that have been created, so without that statewide rental assistance program, there is definitely a gap,” Chamberlain said.