Advocacy groups gather outside the state Capitol building two days after the election to show support for a complete count of ballots. Alanna Elder/WITF

Latino immigrants in Pa. facilitate, react to a Biden victory

“I feel like my vote goes in there as well.” 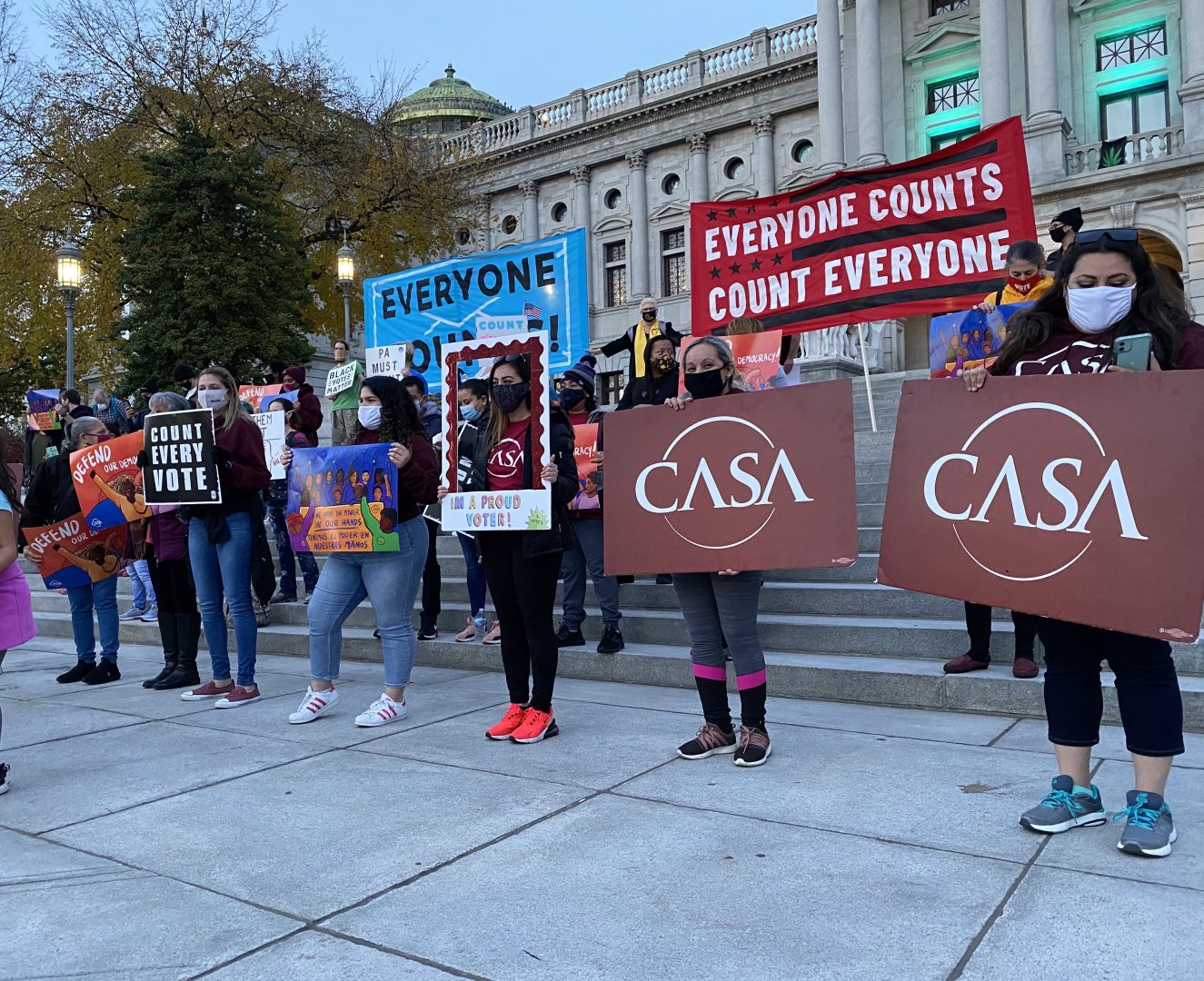 Advocacy groups gather outside the state Capitol building two days after the election to show support for a complete count of ballots. Alanna Elder/WITF

(Harrisburg) — Leading up to the election, Ana Nunez spent weekends knocking on doors, equipped with voter registration data and a lot of uncertainty. She did not know if anyone would answer, if their dogs would be friendly to strangers, or who would ultimately win Pennsylvania’s critical 20 electoral college votes in the presidential race.

Nunez did know she was doing everything she could to get Latino voters to turn out and President Donald Trump out of office. That included her becoming a U.S. citizen.

Trump’s election in 2016 galvanized Nunez, who is originally from the Dominican Republic, to apply for citizenship, in part because she was nervous the administration would yank her own legal status out from under her. But she said she also wanted to have a voice for those whose situations were even more precarious.

“I can have a voice for those who don’t. I now have the right to vote, and with it, to change the future of this nation and the future for the Latino community,” she said.

The day after the election last week, Nunez was tired and anxious while running through worst case scenarios like the possibility of violence over the process to count the votes.  Her best-case-scenario was a new chapter of organizing and a moment for holding politicians she’d supported accountable to their own promises. 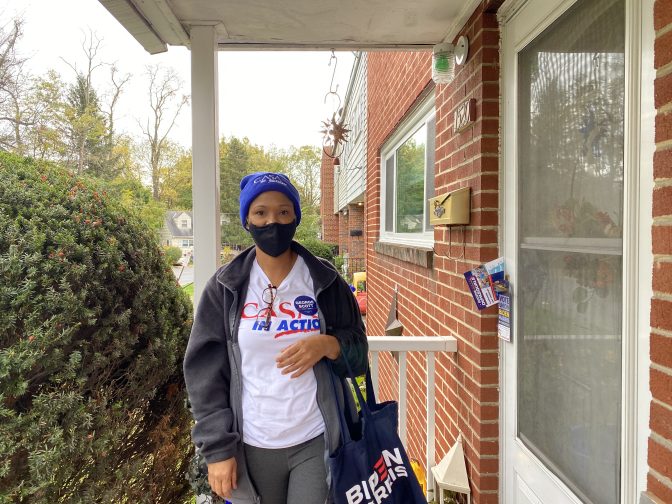 Ana Nunez knocks on doors in the Allison Hill neighborhood of Harrisburg for the advocacy group CASA in Action. Alanna Elder/WITF

“Okay, I helped you to win. Now you have to give me what I asked of you,” she said. “Give me drivers’ licenses in Pennsylvania for people who don’t have paperwork. Give me citizenship for the Dreamers.”

In addition to Biden, Nunez campaigned for state-level candidates, such as Democrat George Scott, who conceded to Republican incumbent John DiSanto in the 15th Pa. Senate District, and Democratic state Rep. Patty Kim for the 103rd District, who ran unopposed.

Nunez works for one of a few organizations that are working to build Latino and immigrant power in the Commonwealth. Many of the people joining the effort are immigrants who, unlike Nunez, cannot vote, but want to influence policy by other means. These groups met Trump’s anti-immigrant rhetoric and dizzying record of stricter immigration orders with organizing that helped carry Pennsylvania for President-Elect Joe Biden.

Stephanie Nuñez grew up hearing stories of immigration struggles in the Harrisburg community and weighing the risks for herself and her family with the calling she felt to speak out.

“Oh, this person is fixing their status, or this person got denied, or this person is in deportation proceedings now. It was very mind-blowing, because there were people who have no type of criminal background. The possible worst thing they have done was probably work under the table or drive without a driver’s license,” she said.

Nuñez came to the U.S. from the state of Jalisco in Mexico at five-years-old and was undocumented for ten years afterward. As teenagers, she and her younger brother were applying for Deferred Action for Childhood Arrivals, a program which protects people who came to the U.S. as children from deportation. During that time, Nuñez began tuning into the news more and became more interested in fighting for the immigrant community. A few years later, the Supreme Court heard arguments in the challenge to the Trump Administration’s attempt to end DACA. Nuñez went to D. C. to protest.

At first her mom, afraid of Immigration and Customs Enforcement showing up, asked her not to go. “She was like, if you’re going, we’re all going,” Nuñez said.

She watched other DACA recipients leave the Supreme Court building and stand in front of it to share their experiences. Riding one of the “big shuttle buses” home, she thought about all the people she could help using her own. Nuñez quickly changed her major at Harrisburg Area Community College from biology to political science. In 2020, she has been helping potential DACA recipients navigate the program’s uncertain standing, working on a campaign to allow undocumented people to get drivers’ licenses, and registering voters.

On election day, Nuñez drove four people to the polls.

“I feel like my vote goes in there as well,” she said. “I feel satisfied by what I did, because we’ve seen it. That one vote makes a difference. Those votes make a difference.”

Despite anxieties around the current immigration system and the two months remaining until Biden is expected to take office, she hopes the presidential win will just inspire more organizing. 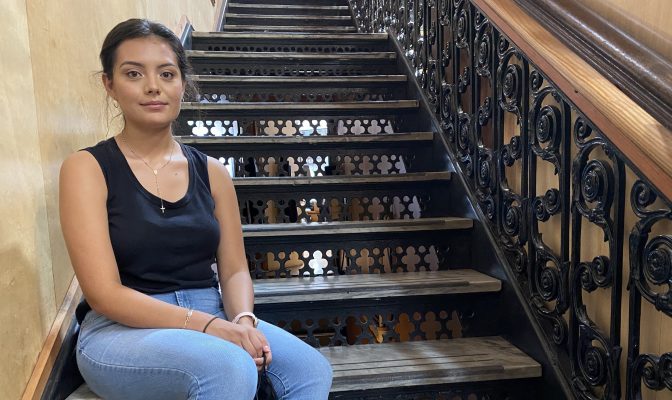 Stephanie Nuñez is an organizer with Movement of Immigrant Leaders in Pennsylvania.

Michael Jones-Correa, a political science professor at the University of Pennsylvania, co-authored a book, published in October, on Latino immigrant participation in politics and their relationships to the government. He and research partner James A. McCann found that even as Trump´s words and actions created anxieties in immigrant communities, people didn´t check out from civic life.

“We find that both for citizens and non-citizens, their levels of commitment and engagement stay pretty steady and in many ways increase after the Trump Administration takes office,” he said. “You see this reflected in turnout in 2018 and I would argue turnout in 2020.”

In 2018, Latinos overall turned out in record-numbers for a mid-term election. The most detailed data about 2020 turnout is not available yet — and reports from the U.S. Census and the Pew Research Center that analyze voter turnout among racial, ethnic, and other demographic groups won’t come out until the spring. But exit polls and overall turnout numbers suggest this year’s election broke records across racial and ethnic groups. What is also perhaps unprecedented is the attention on how Latinos vote.

“Often that narrative is about national origin – so Cubans versus Mexicans – or it’s about state of residence, so Florida versus California,” Jones-Correa said. “But what I think has been a bit underplayed is generation – generation in the U.S.”

Jones-Correa says voters’ proximity to the immigrant experience is an important dimension. He estimates, first-generation immigrants and their children make up more than half the Latino electorate and about a fifth of voters nationwide.

“For these voters, immigrant messaging matters,” he said. “And they are paying attention to Trump’s rhetoric.”

That rhetoric includes Trump´s fear-mongering about the migrant caravans of 2018, the promises about building a border wall in 2016, and his framing of immigrants as murderers and rapists, as well as policy changes like the attempt to end DACA protections and rules making it harder to get asylum. At times during the 2020 campaign, other issues took center stage, but the topic of immigration remained an undercurrent at Trump’s rallies across the country.

Trump’s campaign still placed ads meant to play on fear, racism, and xenophobia, while targeting others to immigrants who are critical of socialism. A month before the election, Immigration and Customs Enforcement used government resources to put up billboards of people “wanted by ICE” and charged with crimes. The agency also held press conferences to celebrate “mostly routine immigration enforcement operations”, Time reported.

As critical as the Trump Administration’s words and actions on immigration have been in mobilizing opposition to the president, they didn’t weigh as heavily on some immigrant voters and even appealed to others who backed his re-election effort. For his research, Jones-Correa talked to immigrants who supported Clinton in 2016 but liked Trump as a person as well as others who wanted Trump to become president. 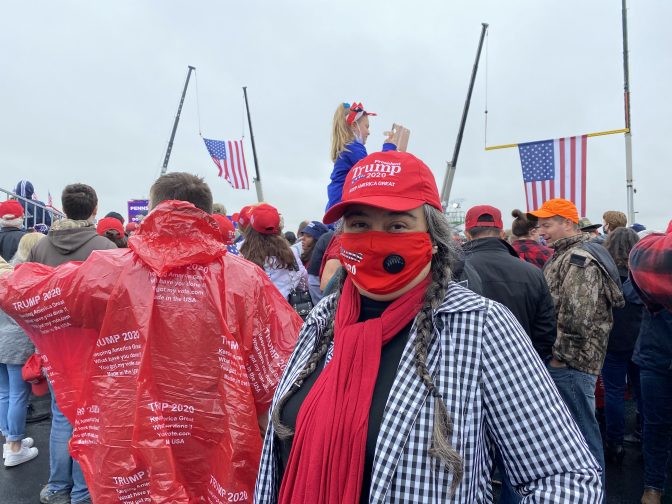 Maria Asin at a Trump rally in Lancaster County a week before the election. Alanna Elder/WITF

Maria Asin would have been part of that latter group. She attended a Trump rally at the Lancaster International Airport in Lititz, Lancaster County, the week before the election. Originally from Bolivia, Asin lived in several countries doing anti-poverty work, which she viewed as a constant testament to the perils of socialism.

“It’s destroying the world. It’s destroying nations. It’s turning countries into Venezuela,” she said. Asin lumped Biden in with the threat and listed other reasons she supported Trump: his nominating judges, moving the U.S. embassy in Israel to Jerusalem, and opposing steps to shrink the oil industry or pass a Green New Deal.

The one thing she said Trump could improve upon was to “finish the wall.”

John Rosales had his pick of two Trump rallies to drive to from his home in Douglasville in Berks County, on a day the president gave three speeches in Pa. before returning to D.C. to celebrate Amy Coney Barrett’s confirmation to the Supreme Court. Rosales went to Lititz.

“It was the closest one, other than Allentown, but that was too early,” he said. “I’m not a morning person anymore.”

Rosales became a citizen in 2010, but didn’t vote until after he finished serving in the Army in 2013. He cast his first ballot for Trump in 2016. Rosales does not consider himself a Republican, but liked seeing a businessman in office instead of a career politician. Having served in Iraq and Afghanistan, he credits Trump for the fact that his recent experiences with the Veteran’s Administration have been smoother. 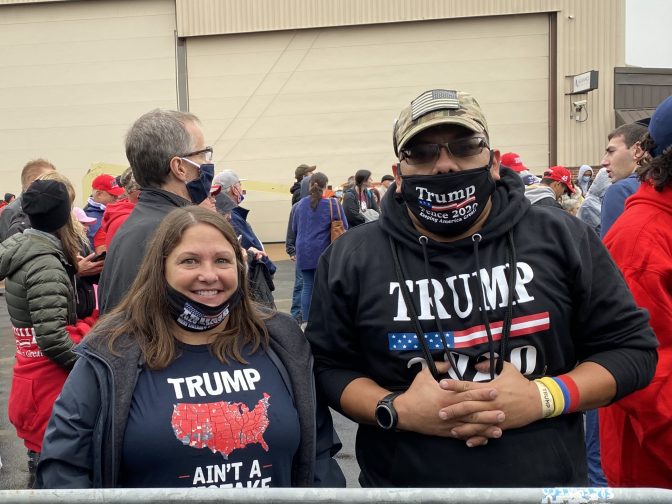 John Rosales and Melissa Gerber wait at the back of the crowd for Trump to speak in Lititz on Oct. 26. Alanna Elder/WITF.

“They’re reaching out to me now. I used to have to call like half a year ahead to make an appointment,” he said.

Rosales said he left Colombia to cross the U.S.-Mexico border in the mid-1990s. He obtained protections as a refugee from his home country’s decades-long conflict. Now, he sees immigration policy through the lens of that journey.

“I came in with the clothes I had on, the shoes I had on, and the backpack I had on my back. You gotta put your priorities first. If you don’t think the system is working, then do it another way, but prioritize it,” he said.

That was before the 9/11 terrorist attacks, which led to the creation of the Department of Homeland Security and heightened immigration enforcement, and before Trump, who added restrictions for refugees and asylum seekers. Rosales recognizes that it’s harder now but is in favor of a more securitized border.

After the election, he said he was disappointed that Joe Biden is now the President-Elect, but he does not buy into the unsubstantiated claims of voter fraud. Plus, there are some things about Biden that Rosales said resonate, like the promise that his taxes won’t go up. He is trying to move forward.

“I think one of the main things that we need to do is tackle the problem with racism. I think when people find out I’m a veteran they treat me with a lot more respect and dignity, but way, way before, when I was younger, before I was a veteran, I had a couple episodes where I felt uncomfortable,” he said. “Everybody’s life is different.”

Analysts predict Biden will quickly roll back Trump’s “Muslim ban” and fully reinstate DACA, according to NPR, though some of Trump’s more than 400 executive orders on immigration will be more difficult to dismantle. On the state level, advocates face a different challenge. They will have to convince the GOP-controlled legislature to consider some of the items on the agenda – starting with legalizing drivers’ licenses for undocumented immigrants.