Some Republicans repeated the president’s false claims of election fraud. 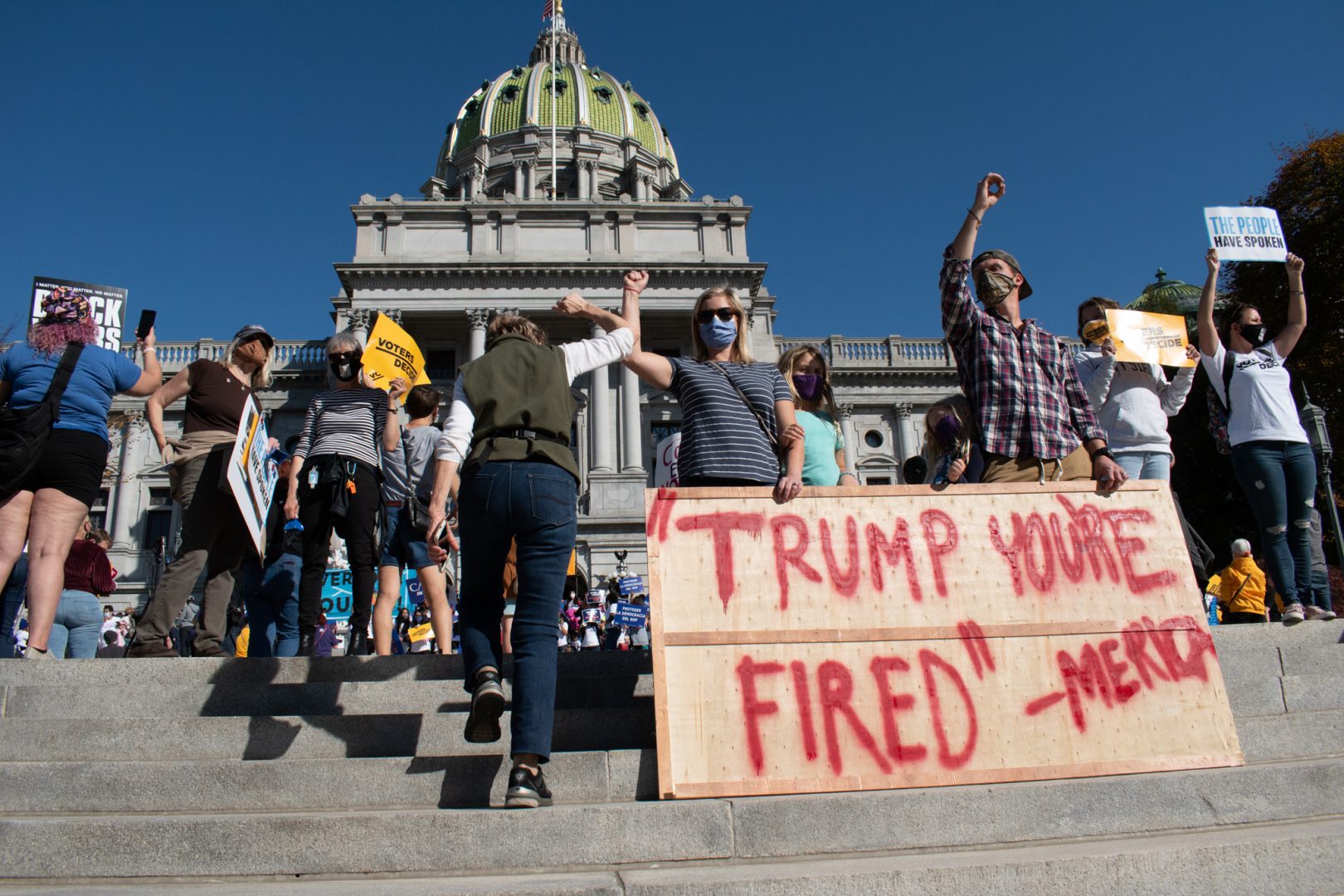 (Harrisburg) — Supporters of Democrats and Republicans were gathered in front of the state Capitol building at opposing political rallies late Saturday morning.

Then, the Associated Press called Pennsylvania for Democrat Joe Biden, making him the projected winner of the presidential election.

Biden supporters, who stood on the steps of the Capitol, broke out in celebration. Backers of President Donald Trump shouted up at them.

The two groups were separated by police.

“Will you unite with us?” a person on the Biden side with a microphone said to the pro-Trump crowd. 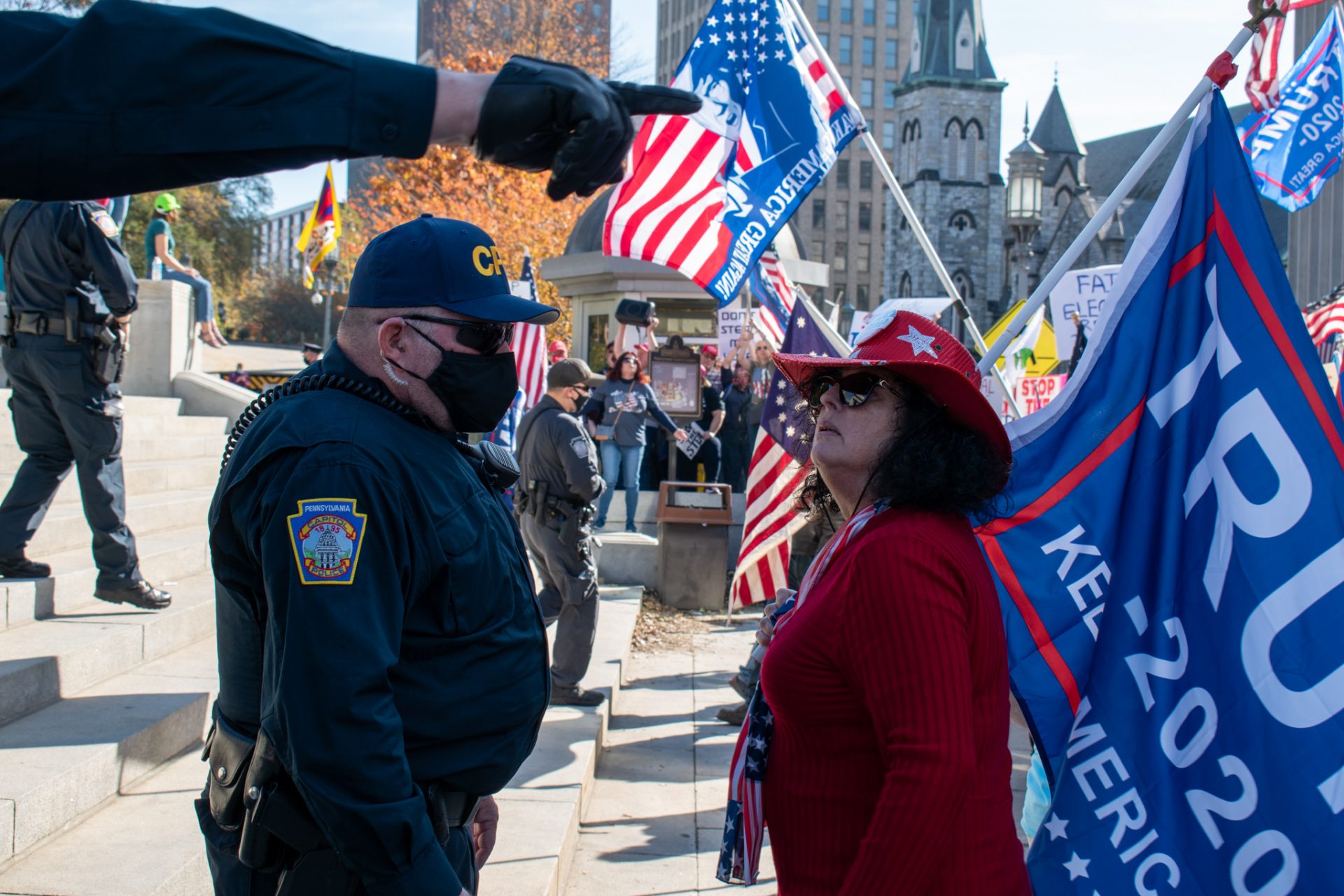 Soon, Republicans, some carrying Trump flags, split away to the other side of the Capitol building, where they held their own rally — a sign of a divided populace in a state where 49 percent of Pennsylvania’s nine million registered voters selected Donald Trump.

Charlane Benson shouted with joy when she learned Biden was declared the winner in Pennsylvania. She hopes the president-elect will roll out a coherent federal policy on the coronavirus, which has killed more than 237,000 Americans, with new cases skyrocketing in recent weeks. Biden is scheduled to make a plan to address COVID-19 public next week.

However, Biden won’t take office for more than two months, Benson noted. She worries that supporters of the president will believe his unfounded claims of election fraud, making it harder for people to come together. 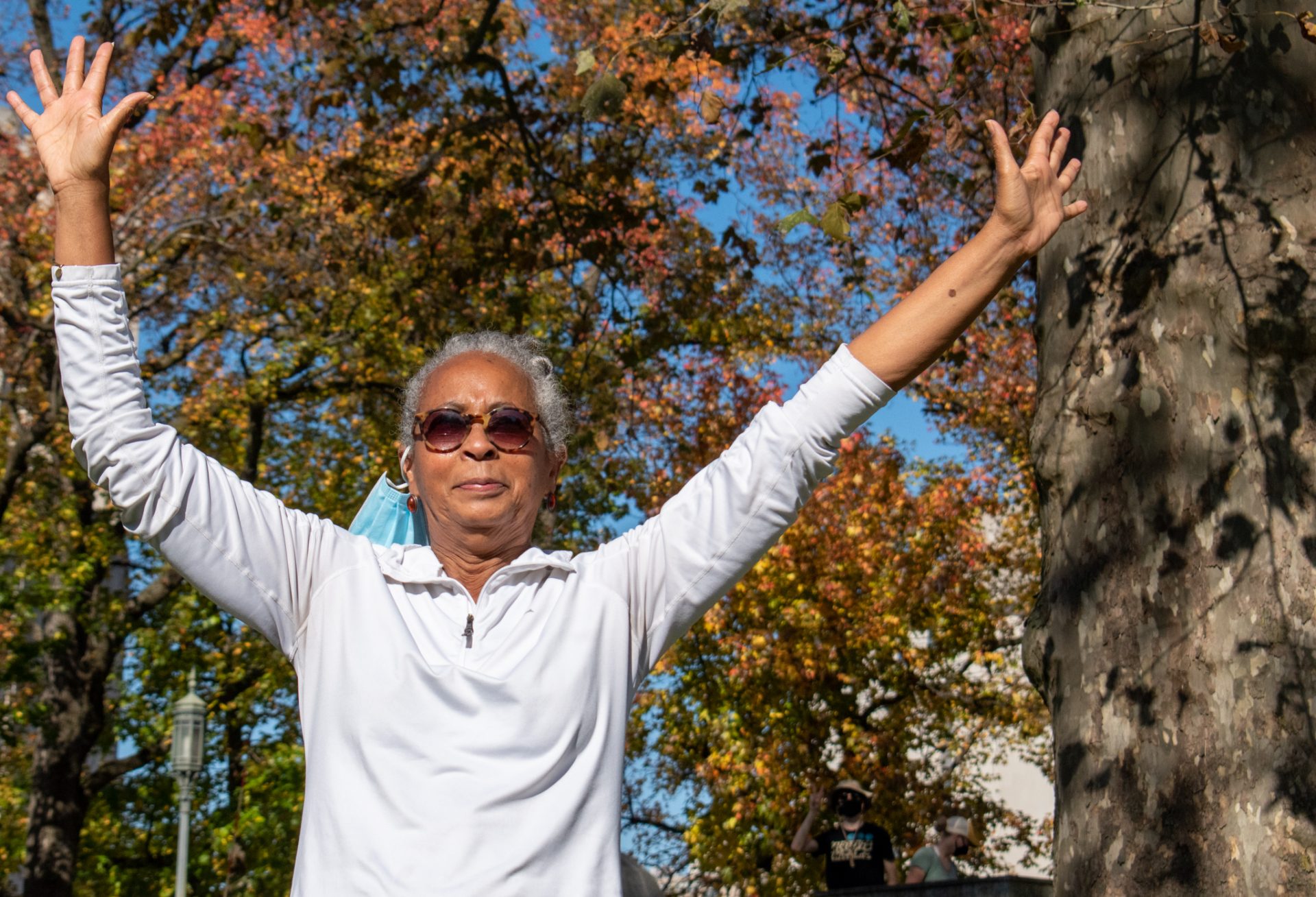 Charlene Benson joyously raises her hands for a portrait near the state capitol Sat., Nov. 7, 2020.

“We know it’s not true. He just lies. How can you believe a word he says?” she said, after citing that the president has made more than 20,000 verifiably false claims times since he took office.

There is no evidence of problems with Pennsylvania’s highly-scrutinized mail-in ballots. However, on the other side of the state Capitol, Richard Brink said that’s not what he’s hearing online on rightwing media.

“And the media is very divided too, so it depends on where you get your information, and I think it’s probably safe to watch both sides—because I’m kind of shocked [ about] the different realities people live in,” Brink said.

The longtime pastor says he is praying for peace and will accept the results of the election. 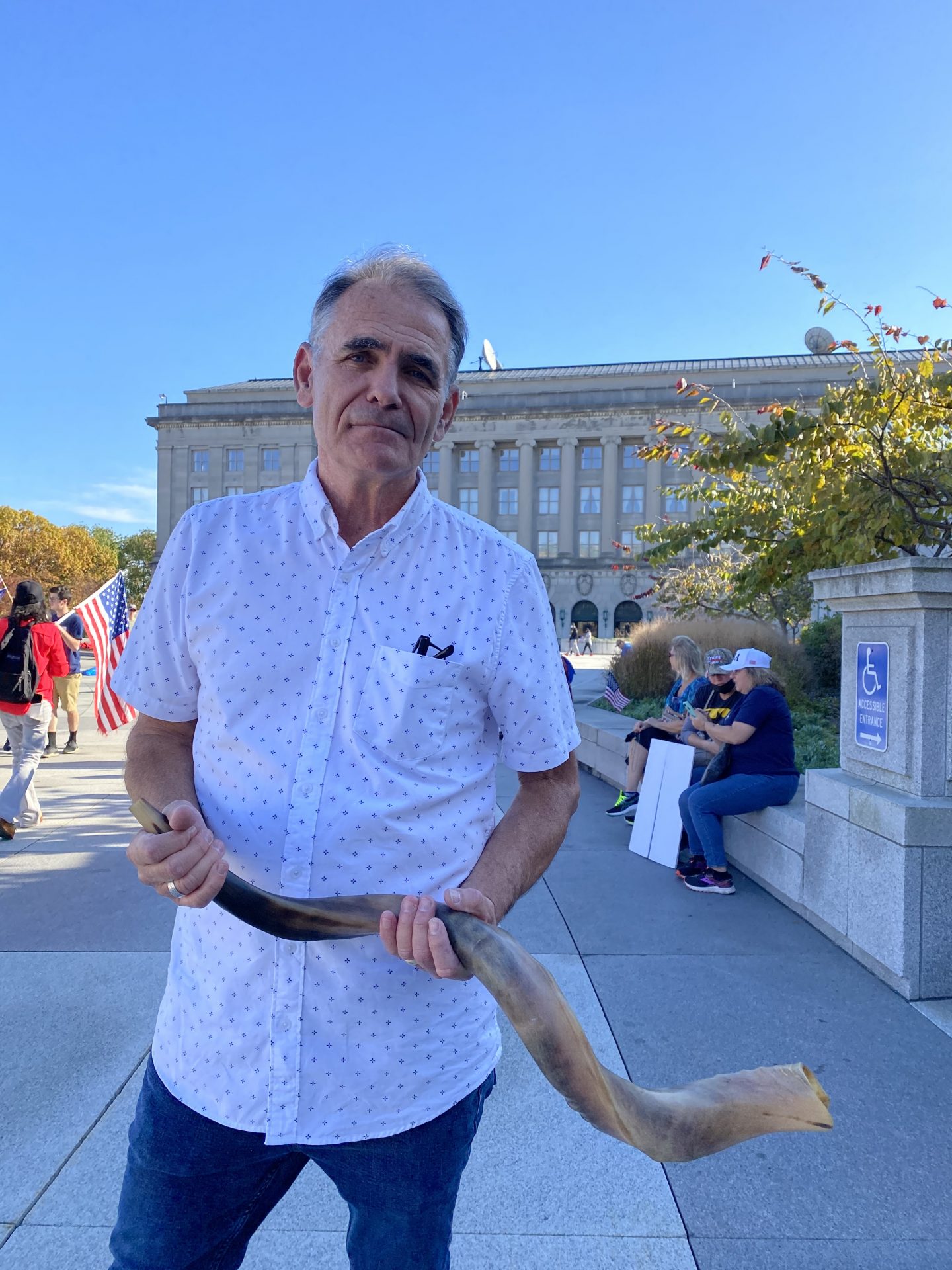 Trump supporter Richard Brink holds a shofar, a horn typically associated with Jewish rituals. Brink says he is not Jewish, but blows the horn for times of prayer.

However, that wasn’t the message among some of the speakers at the rally. State lawmakers, including Sen. Mike Regan, R-Cumberland and York, Rep. Barbara Gleim, R-Lancaster and Rep. Frank Ryan, R-Lebanon, spoke at the event.

Trump campaign organizer Tricia Cunningham asked the crowd, “Who is your president?” 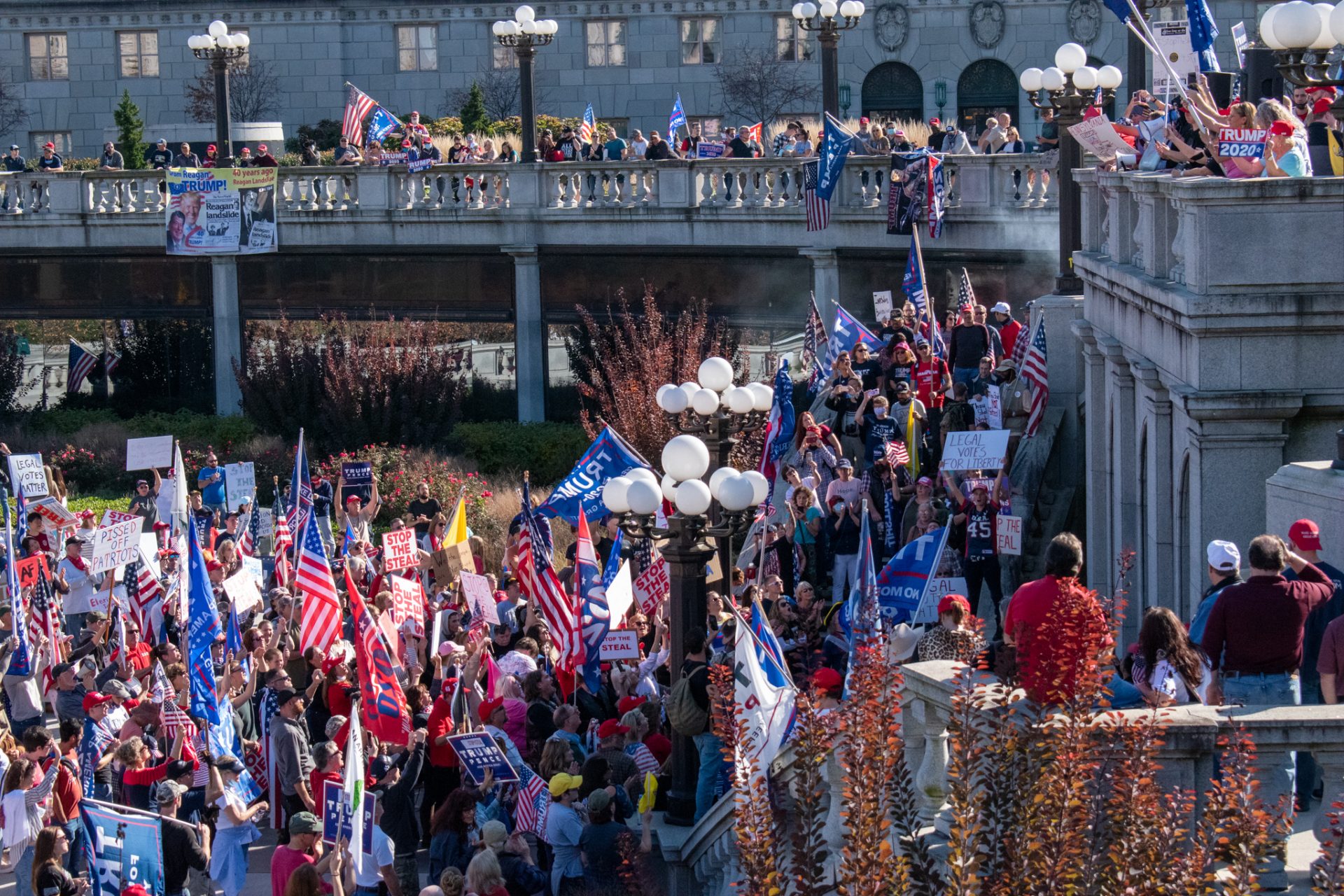 Trump supporters reconvene at the east side of the Pennsylvania state capitol Sat., Nov. 7, 2020, after splitting up from Democratic counter-protesters on the west side of the building.