Protestors confront police during a march Tuesday Oct. 27, 2020 in Philadelphia. Hundreds of demonstrators marched in West Philadelphia over the death of Walter Wallace, a Black man who was killed by police in Philadelphia on Monday. Police shot and killed the 27-year-old on a Philadelphia street after yelling at him to drop his knife.

Police Commissioner Danielle Outlaw said this is the first body camera footage release of a police shooting in the department’s history.

City leaders on Wednesday afternoon also named the officers who fatally pulled the trigger as Thomas Munz, 26, and Sean Matarazzo, 25, neither of whom have more than three years experience.

Police Commissioner Danielle Outlaw said this is the first body camera footage release of a police shooting in the department’s history, and its release also comes with a newly announced raft of crisis response reforms intended to improve police dispatches in the future.

“With this release, the world will see we are engaging in an open process — a process that acknowledges the harm our actions have caused,” Mayor Jim Kenney said.

Wallace’s killing sparked protests across the city, and additional marches erupted ahead of the video release Wednesday night.

The actions come at a time when Philadelphia is in the national spotlight as election officials carefully hurry to process an unprecedented number of mail ballots that could prove decisive in electing the country’s next president. Rallies that had been organized to press the message to “count every vote” merged with protests calling for justice for Wallace, one of 158 Black people killed this year by U.S. police. 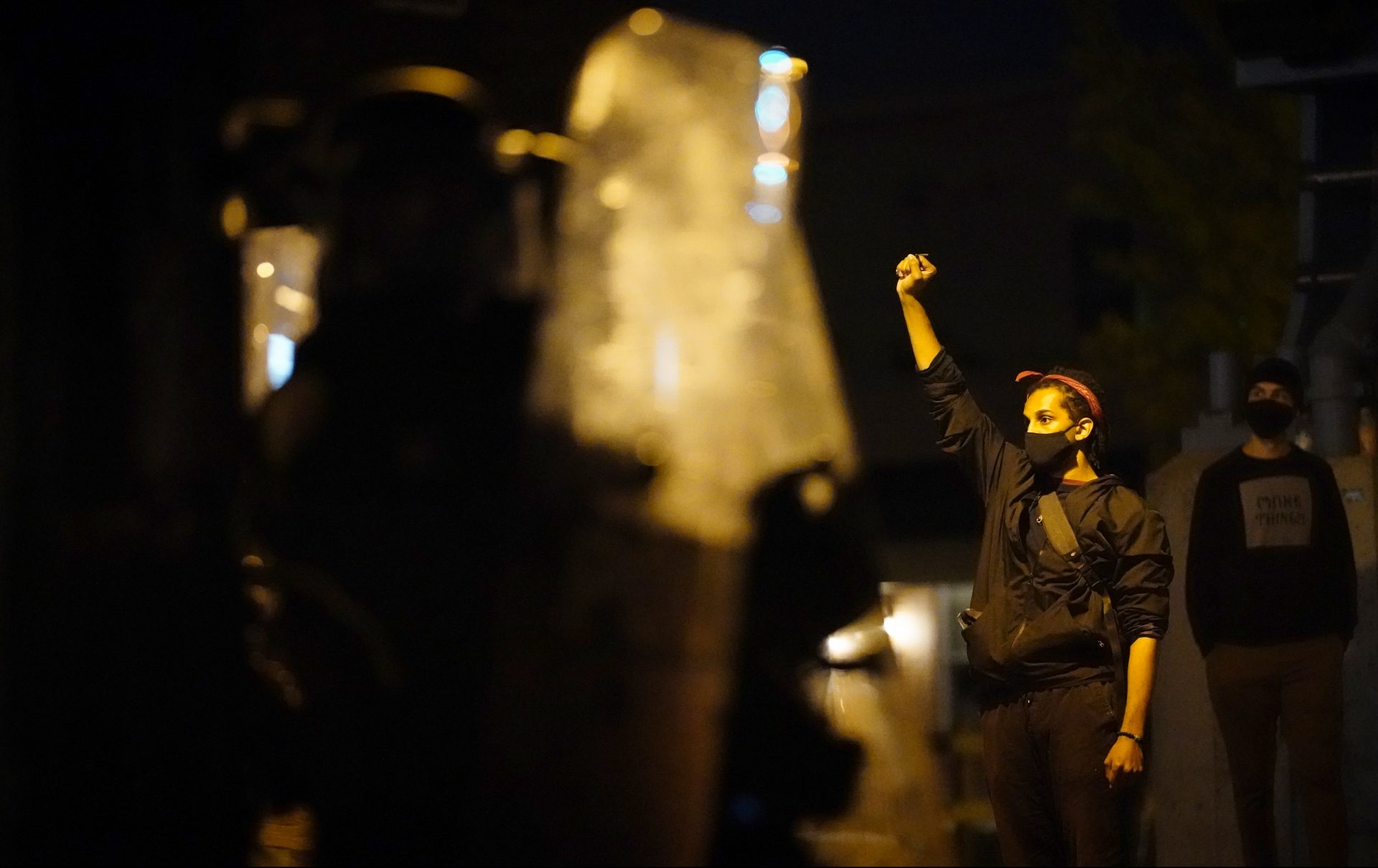 A demonstrator raises a fist near Philadelphia police in Philadelphia, late Tuesday, Oct. 27, 2020.

‘You killed my son’

The four-and-a-half-minute tape shows the encounter from both officers’ point of view.

Officers Matarazzo and Munz arrive at a distressing scene on the 6100 block of Locust Street in broad daylight. Seconds after the officers engage their cameras, the 27-year-old Wallace can be seen emerging from his family’s home with a knife in hand and walking slowly toward officers as his family members shout alerts about his mental status.

Wallace appears unresponsive to the torrent of screams from police and family. He moves away from police into the street, changing directions at several points. A woman who self- identified as his mother tries to get control of him, but he brushes her aside. Soon after, an unidentified bystander attempts to grab Wallace from behind. When he appears to feel the touch, Wallace darts away between two parked cars, moving toward officers once again in the street.

“Shoot him,” one officer can be heard saying to the other.

Wallace was not rushing officers nor did he have the knife raised at the time they opened fire from several feet away, both body camera videos show. A woman who identifies herself as Wallace’s mother rushes her son’s bloodied body on the ground.

“You killed my son,” the weeping woman screamed at the officers.

The final seconds of that encounter were largely revealed in graphic cell phone video on social media that day. But the new footage adds more context to the police response, from the moments officers arrived on scene to the aftermath of the gunfire, when a crowd gathers and officers rush to address the scene.

“We gotta get him to the hospital,” one officer said.

“Get in the car,” the other officer tells him. “We’ll scoop him.”

Both body camera videos cut off after officers’ get in their patrol cars. The video was trimmed at the family’s request, according to District Attorney Larry Krasner.

In the wake of the shooting, police reform advocates are calling for the termination of the two officers — and for sweeping reforms to the way police respond to mental health crises like the one Wallace was experiencing.

Councilmember Jamie Gauthier, whose district covers the area of West Philly where the shooting occurred, described the footage as an indictment of the officers’ training to handle the situation, from start to finish.

“It was clear to me that these officers had no idea how to handle this situation — from their use of force so quickly into the encounter to the lack of knowledge of what to do right after they literally killed a human being,” Gauthier said after reviewing the footage. “They just had no idea.”

Officials also released audio from police dispatch and 911 calls that led up to the incident. The first was a hangup. Then a concerned neighbor on Wallace’s block of Cobbs Creek called about the distress. A woman who says she is Wallace’s sister then called to report her brother being violent toward her parents, and requested medics to the scene. She told dispatchers that no weapons were involved.

“My dad said he’s about to faint and my mom’s blood pressure is all the way up,” the unnamed sister tells the dispatcher.

At least two more calls came from others, followed by a recorded call of the police dispatch to the scene. 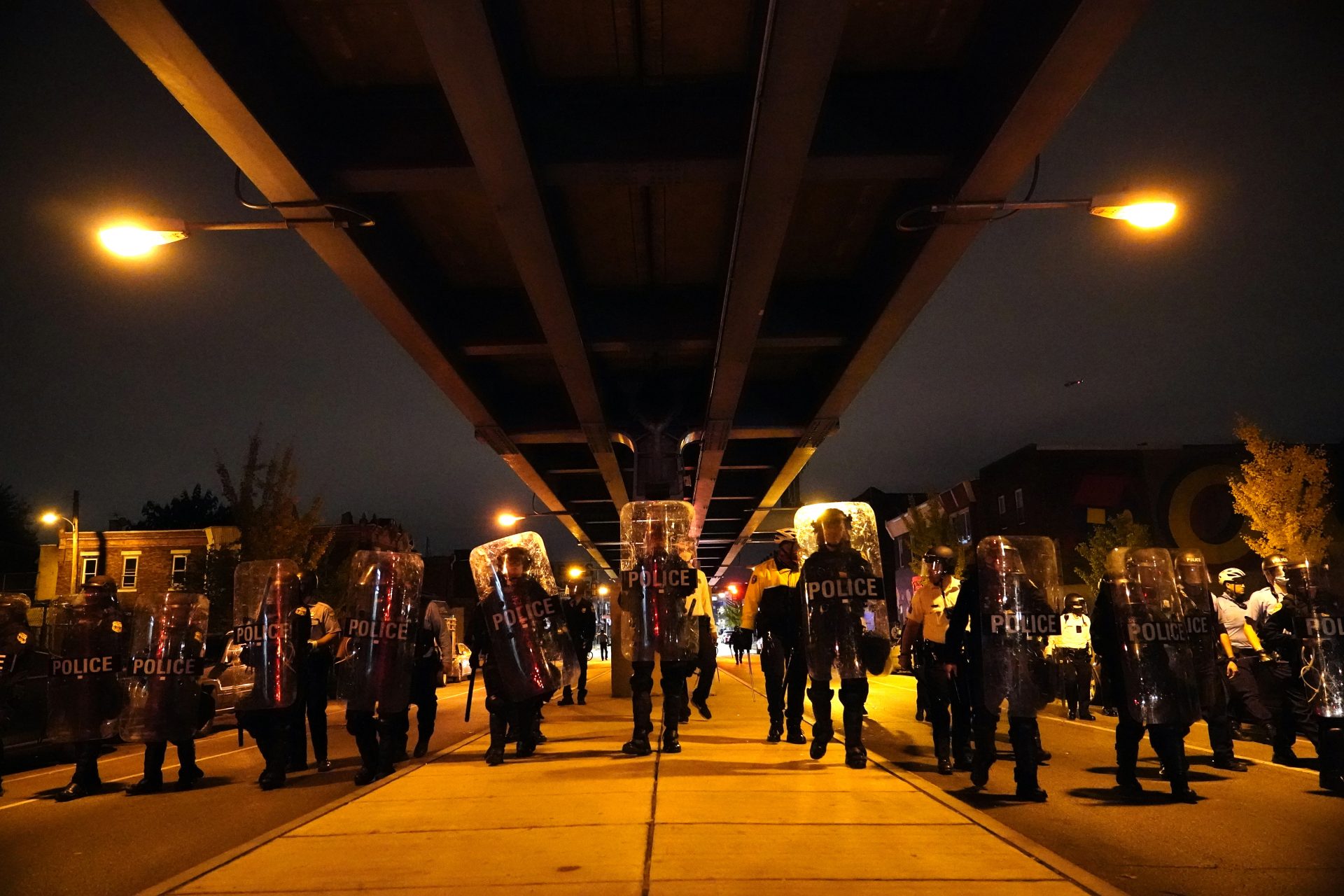 The Amistad Law Project, a public interest law center and advocacy group in Philadelphia, is one of the groups calling for the firing of both officers.

The two men are relatively new additions to the force, both assigned to the 18th Police District, which covers the Cobbs Creek, Cedar Park and University City neighborhoods. Ofc. Munz joined in 2017, while Ofc. Matarrazzo joined the following year in 2018.

Both officers have been taken off active duty pending the findings of a joint investigation by the PPD’s Officer Involved Shooting Investigation Unit and the District Attorney’s Office.

The Amistad Law Project is also demanding the city avoid advancing more funding to the police department — even if its intent is to fund Tasers. Neither Munz or Matarazzo was equipped with the “less-lethal” weapon when they were called to Wallace’s block in West Philly.

Advocates have for years been pushing the city to establish an alternate response team for mental health crises.

“Police are called for pretty much anything that people would call 911 for instead of a better service that could help folks,” said Kris Hendeson, Amistad’s executive director. “But I think we definitely have a create and visionary city and I think we can push our leaders.”

After Wallace’s death, Billy Penn reported that a mental health response center that knew Wallace and his family had been asking the police department to integrate their services and call them for assistance. But those calls went unanswered for months, in part because the police department does not have a formalized behavioral response team, according to PPD Commissioner Danielle Outlaw.

On Wednesday, Outlaw announced the department would dedicate resources to connecting more behavioral health specialists to police radio/dispatch and would increase crisis intervention training for all officers.

Prior to the Wallace shooting this fall, the city launched a new program to triage 911 calls that appear to involve mental crises, embedding behavioral health specialists in the police radio room. (No specialist was in the room on the afternoon of Wallace’s killing, Outlaw said.) To further improve the program, dispatchers will begin crisis intervention training next week to help them better identify these situations.

The plan calls for co-response teams involving mental health professionals to be deployed in the field by mid-January 2021.

Mayor Kenney and District Attorney Larry Krasner have said they hoped releasing the video and 911 audio would help the public heal and reconcile as the investigation into the police response runs its course.

Other leaders say the video will likely elicit mixed responses.

“People who have had bad interfaces with the police department are going to make judgment calls based on their lived experience,” said Councilmember Maria Quiñones-Sánchez, who represents a predominantly Black and Latino part of North Philly. “Police officers based on their training and their experience are going to look at it differently.”

Across the board, lawmakers and city leaders encouraged the public to focus on supporting the Wallace family and said they would press for a swift investigation to bring action.

Wallace’s family has said they do not wish to see the two officers face murder charges in their son’s death. The family’s attorney, Shaka Johnson, hinted at a possible wrongful death lawsuit. A GoFundMe page organized on behalf of Wallace’s widow, whom he married just weeks before he was killed, has raised more than $180,000.

Wallace became the 10th civilian shot by a police officer in Philadelphia this year, according to department statistics, and his death marked the second fatality. Police shootings have largely been on the decline in the city over the last decade.

Pennsylvania chips away at 1M vote count amid Trump lawsuit