(Harrisburg) — Pennsylvania had hundreds of thousands of ballots left to count Thursday, a number that state officials expected to dwindle rapidly as Democrat Joe Biden and President Donald Trump fought to the end for the White House.

“It’s very close in Pennsylvania, there’s no question,” said the state’s election’s chief, Kathy Boockvar. “So that means it’s going to take longer to actually see who the winner is.”

Some of the state’s most heavily populated locales, including Montgomery and Chester counties in the Philadelphia suburbs, reported finishing their tallies. The Trump campaign asked a federal judge to stop the count in Philadelphia itself, alleging city officials were depriving their observers of meaningful access. There was no immediate ruling.

Despite a flurry of legal action by Trump and the Republican Party over aspects of the count, counties across Pennsylvania headed toward the finish line of a massive tabulating effort that included millions of mail-in ballots. Pennsylvania remained the largest electoral prize yet to be called.

The counting of ballots continues after election night most years. This year’s surge in mailed ballots means election offices need extra time to tally all the votes.

Winners will be decided when all the votes are counted — that’s the American election system at work.

WITF’s journalists are covering that process, and WITF is relying on The Associated Press to call races for the winner based on the AP’s rigorous, time-tested method.

“We’re in a very good place with the mail-in and absentee ballots, but not quite there yet,” Boockvar, the secretary of state, said at a late-afternoon briefing. “What I’ve said all along is that the overwhelming majority of ballots will be counted by Friday. I still think we’re ahead of schedule.”

The Trump campaign and the Republican Party argued in court that GOP election observers were too far away from the tabulation in Philadelphia, that some Democratic-leaning counties unfairly allowed people to fix technical problems with their mail-in ballots, and that mail-in ballots arriving after Tuesday should not be counted.

Trump scored one legal victory as intermediate state appeals court on Thursday granted more access to party and candidate observers, allowing them to get closer — 6 feet away — to election workers processing mail-in ballots in Philadelphia.

The Trump campaign later filed an emergency action in federal court, asserting the city had failed to comply with the state court order. The campaign asked a federal judge to halt the count “so long as Republican observers are not present as required by state law.” 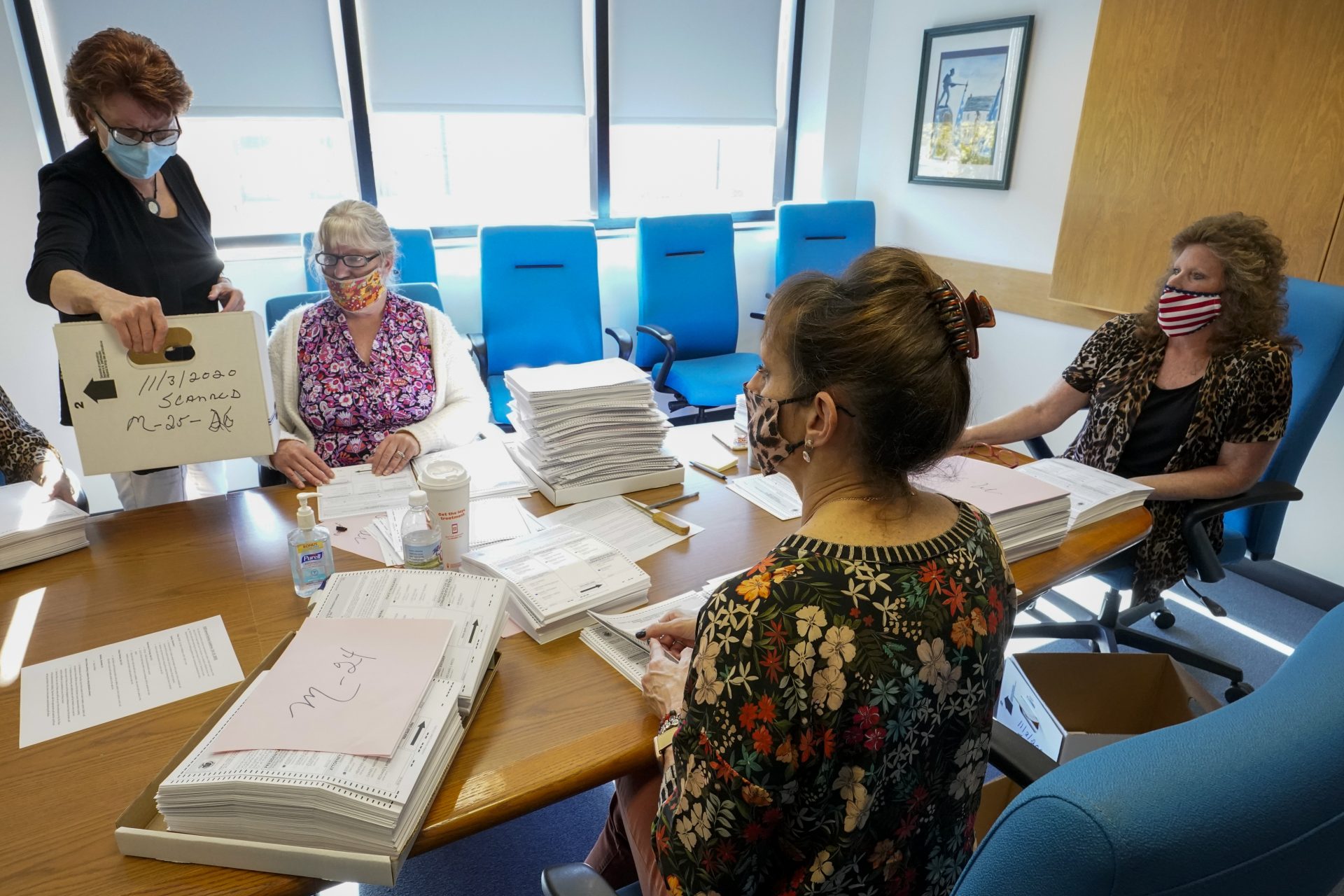 The city insisted it had moved barricades as ordered, even as it appealed the state court ruling to the Pennsylvania Supreme Court, citing concerns over worker safety amid the coronavirus pandemic and the potential for intimidation.

The Trump campaign said it wanted better access to the count to ensure that ballots contained a signature and an eligible voter’s name and address. Ballots without that kind of information could be challenged or disqualified.

It was unclear whether any of the legal challenges would make a difference to an eventual outcome.

Bob Bauer, a Biden campaign adviser, said the Trump campaign lawsuits don’t have any merit and are designed to spread misinformation, disrupt vote counting and confuse the public.

“It is to create an opportunity to message falsely about what’s happening in the electoral process,” Bauer said.

Wolf accused Republicans of seeking to undermine confidence in the election results, and Boockvar, the elections chief, said the state has acted legally and properly to ensure a complete and accurate count. More than 2.6 million mail-in ballots were cast, and there has been no report of fraud or any other problem with the accuracy of the count.

Appearing on “CBS This Morning,” state Attorney General Josh Shapiro — also a Democrat and seeking reelection in a race that has not yet been called — said the count “may be going a little slow, but it’s going very, very smooth.”

He added: “I recognize everybody’s on edge. … Everybody wants to know and the best thing we can do is get an accurate count and make sure that these legal votes are counted and that’s exactly what’s happening here in Pennsylvania.”

Allegheny County, where Pittsburgh is, wrapped up the initial vote count but had to wait until Friday to tabulate more than 35,000 mail-in and absentee votes. The delayed count of 29,000 of those votes stemmed from an earlier glitch in involving voters who were initially mailed ballots with the wrong contests on them. The county issued corrected ballots but said it would review them to make sure they were counting only one ballot per voter.

Other ballots that will be reviewed include ones that couldn’t be scanned, or that were missing a date or had an illegible voter declaration, said county spokesperson Amie Downs.