Three people showed support for President Donald Trump by playing music and recordings of his voice in the parking lot of a polling place at Sacred Heart Parish Center in Cornwall, Lebanon County, on Nov. 3, 2020.

In Lebanon and Lancaster counties, potential voter intimidation incidents appear to be resolved at polling places

One case involved an allegation of someone electioneering within 10 feet of the polling site.

Be patient: Results of today’s election in Pennsylvania, and across the country, likely won’t be known for days. Here’s how WITF’s newsroom is covering election night and beyond.

(Lebanon) — An election judge in Annville said she received two complaints from voters about a Republican party representative who was stationed outside the polling place at Annville Church of the Brethren in the 18th precinct in Lebanon County.

Hazel Diaz said the person was sitting near the entrance and insisting on talking to voters after they declined to stop and chat.

Campaigning is allowed, as long as it happens 10 feet from the room where people are voting. The poll workers at this location were enforcing that rule at the door of the church, which leads to a hallway and open floor plan.

Diaz said advocating for candidates is fine, but “anything where you’re going past asking people to speak to you and you’re saying no and moving it further than that can be seen as voter intimidation.”

She asked him to move 10 feet from the door, and later told him she would call the constable to remove him if she received further complaints.

“We are 50/50 split to whether he will come back today or not, because we’ve had similar experiences with him in the past,” she said at about 2 p.m. “This is not unusual for that individual, I would say.”

Later in the evening, Diaz said, the individual did return and earned a few more complaints from voters, whom he approached at their cars. She said he called the sheriff’s office and the sheriff told him to leave. Later, he returned with a poll watcher certificate and sat indoors during the last hour the polling place was open, but “was more subdued”, according to Diaz.

Lebanon County Sheriff’s Department has not yet responded to a request for comment.

Lebanon County Republican Committee Chair Ed Lynch said he could not comment on what happened because he was not there, but he spoke with the poll watcher about it. Lynch interpreted the incidents as a poll watcher and election judge “butting heads”.

“I think they were both being very difficult with each other the entire day yesterday,” Lynch said. “The county elections director was informed about it.”

The poll watcher could not be reached for comment. Lynch said he did not receive any other calls with complaints about poll watchers that day.

In the early afternoon, a group of three young people with Trump flags set up outside the Sacred Heart Parish Center in the 12th precinct of Cornwall. 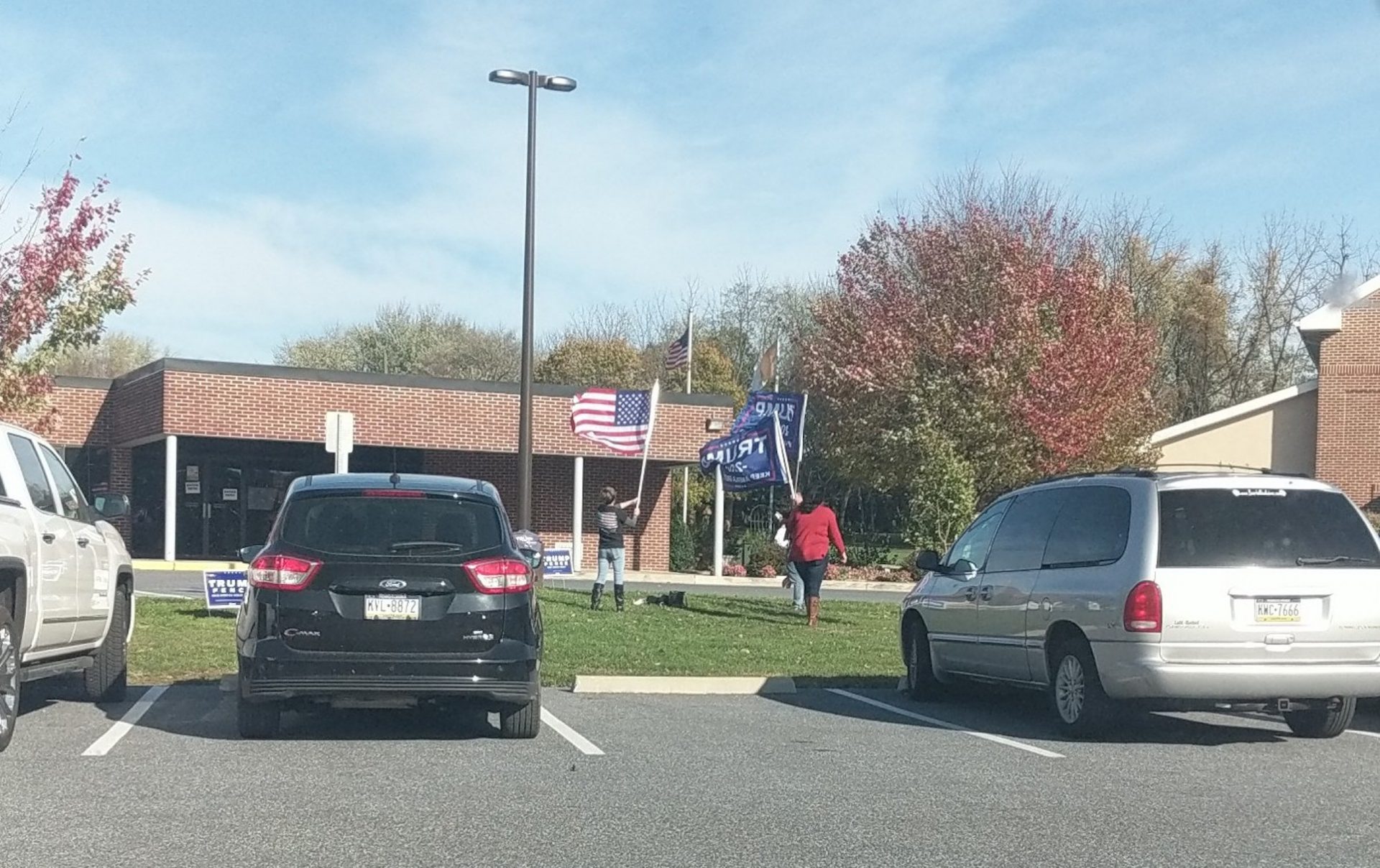 Three people showed support for President Donald Trump by playing music and recordings of his voice in the parking lot of a polling place at Sacred Heart Parish Center in Cornwall, Lebanon County, on Nov. 3, 2020.

Tealia Hutter arrived at the polling place to vote at 2 p.m. when she saw the group playing music and recordings of Trump’s voice on a grassy island in the parking lot. It struck her as excessive.

“It concerned me because it doesn’t matter what side you’re on. It’s very important to protect the sacredness of people voting,” Hutter said.

Hutter called the voter protection hotline to find out whether the activity was legal. People are permitted to campaign outside polling places as long as they remain 10 feet from the room where voting is happening. But, there are a number of activities that are prohibited, such as “aggressive or threatening behavior inside or outside a polling place.”

Inside the polling place, election judge Lorraine Lowrie said she heard the music and the recordings. She called county elections office to confirm the behavior was allowed and determined it was.

Alan Olson, a poll watcher with the Democratic Party who was stationed at a different polling place in Cornwall, heard about the commotion and stopped by during his lunch break. He did not think the behavior was extreme enough to file a complaint, however.

“It wasn’t really intimidating anyone,” he said.

A constable who had been driving between Sacred Heart and Cornwall United Methodist Church was also on the scene, according to Olson, and did not ask the group to leave.

Olson said he did file a complaint about another polling place, but could not comment on that case.

The Pennsylvania Election Protection Coalition reported 2,500 calls to its hotline as of this afternoon, including complaints about the presence or behavior of constables in Lehigh, Dauphin, and Cumberland counties.

Tony Perlstein, a volunteer with Latino advocacy group CASA, said it happened about 30 feet from a polling place at Burrowes Elementary School, 1001 E. Orange Street in Lancaster around 11 a.m. Tuesday.

Perlstein said he was called to help translate for the elderly woman, who was not named, when a man identified as a deputy constable at the polling place tried to dissuade him from helping. That man then shouted at Perlstein and the woman and accused them of cutting the line when they went inside to ask for help.

Perlstein said the woman needed help finding her correct polling place. He eventually escorted the woman to that location.

“She didn’t understand what he was saying or why he was saying it,” Perlstein said. “My instinct here was [he was] doing that to create an environment where people felt a little afraid and basically intimidate folks.”

Terry Christopher, the Republican party’s area chairman for Lancaster Township, said he worked with the deputy constable involved throughout the day, describing him as a “stickler.”

“He’s very strict in trying to be by the book, and he doesn’t want anyone cutting in line,” Christopher said. “He’s more of a stickler for the rules and he didn’t realize there was a language barrier. He just saw somebody that was cutting in line and it was just a bad look. I don’t think it was his intention to infringe on anyone’s rights.”

Both Republican Committee chairman Kirk Radanovic and Lancaster County commissioner Ray D’Agostino said they had not received reports themselves about the incident. Both declined to comment further.

Note: This article was updated on Nov. 4th  to include details about the first incident that emerged later in the evening and a statement from the Lebanon County Republican Committee.