In Lititz, Trump touts saving Pa. manufacturing jobs — but those jobs have declined overall since he took office 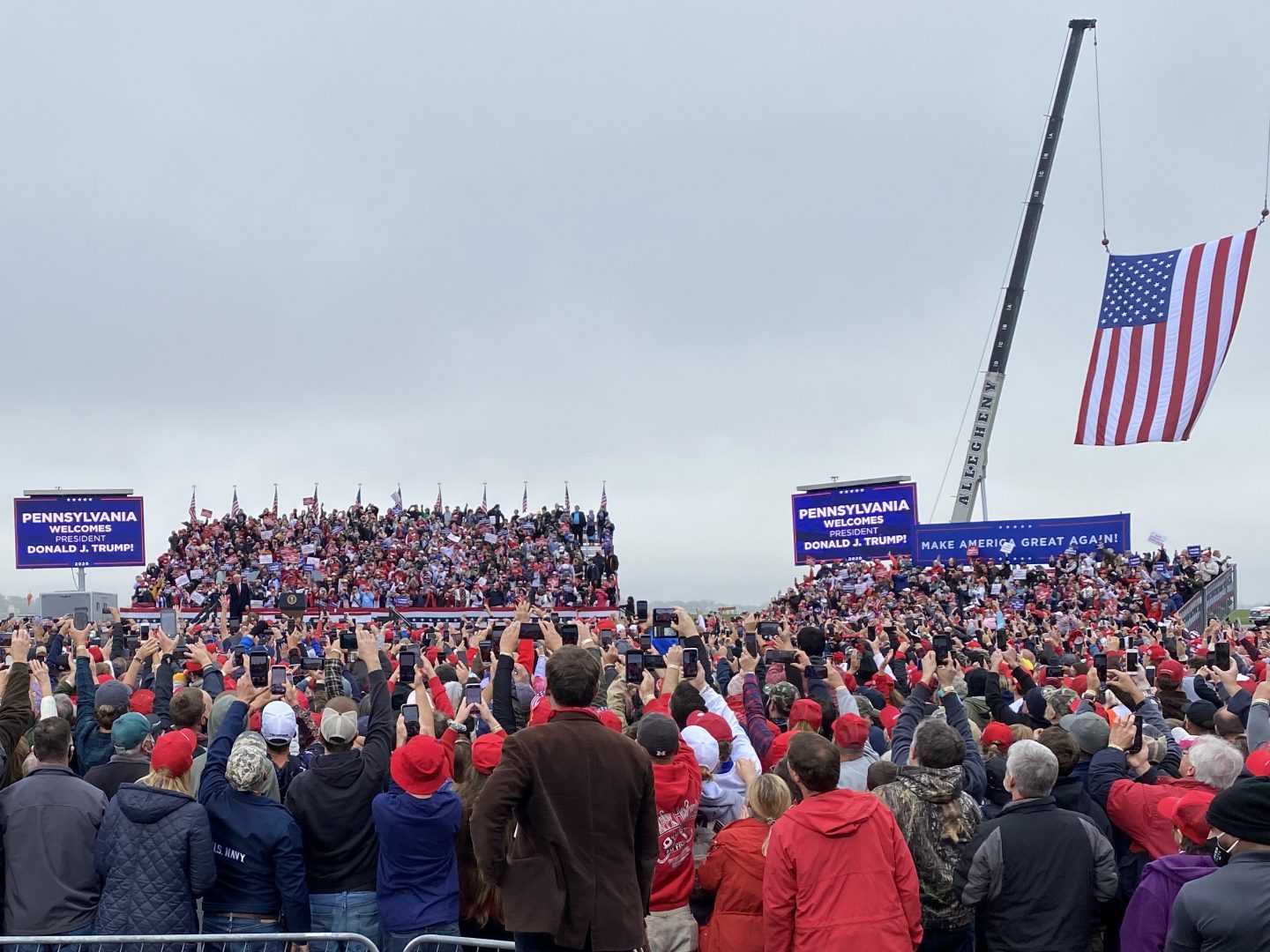 (Lititz) — President Donald Trump told a crowd outside Lititz on Monday that if re-elected, his administration would continue to preserve manufacturing and industry in Pennsylvania.

He touted deregulation and the renegotiated US-Mexico-Canada trade deal as he updated a case he made to Pennsylvanians in 2016, when he won the state by 44,292 votes.

Manufacturing jobs rose slightly in Pennsylvania during Trump’s term before plummeting during the pandemic. Overall, manufacturing jobs are down about 4 percent under Trump, whose response to the coronavirus is seen by many observers to have contributed to the resulting economic downturn. Excluding the 2008 recession and the pandemic, the manufacturing industry nationwide added jobs at about the same rate under Trump and former President Barack Obama.

Trump’s visit to Lancaster International Airport was one of three rallies he held in Pennsylvania eight days before Election Day. He also went to Allentown and Martinsburg.

When Trump talked about the USMCA, he reminded the crowd that he pulled the U.S. out of the North American Free Trade Agreement.

“[Biden] was a cheerleader for NAFTA, and I ended it. Remember everyone used to say, we’re going to end it, and everyone smiled, they said, ‘Hey, look. Give it a shot.’ And I got it done. Nobody thought I could get that done,” he said.

Former Vice President Joe Biden voted for the North American Free Trade Agreement in 1993 and has expressed support for the USMCA, particularly the stricter labor and environmental rules added by House Democrats. Biden’s campaign has focused more on supporting manufacturing than on trade, promising to invest in the development, creation, and purchase of products “Made in America.”

In a public statement responding to Trump’s focus on trade and jobs, Biden criticized the president for giving tax breaks to companies that outsource and losing jobs in a trade war with China. “Working families in Lehigh, Lancaster, and Blair Counties deserve a president who will fight every day for their families, their health care, and their jobs,” it read.

Trump said without evidence that a COVID-19 vaccine would be ready “momentarily.” Experts, including those within his administration, said a vaccine won’t be widely available to the public before the spring or summer of 2021.

A week before the election, cases are spiking in the commonwealth and across the country, and hospitalizations in Pa. have doubled in the last month, according to the Philadelphia Inquirer. Describing his own experience with the coronavirus and downplaying its risks, Trump attacked Democrats, including Gov. Tom Wolf, for imposing restrictions amid the pandemic.

Turning to the election itself, Trump once again made unsubstantiated claims about the trustworthiness of mail-in ballots, contradicting experts who say voter fraud is rare and mail-in voting has been tested in several states.

Biden made a surprise appearance in Chester on Monday, where he criticized the Trump Administration’s response to the pandemic, calling for rapid testing and for funding for schools and businesses to open safely. He also attempted to set the record straight on his energy policy, responding to Trump’s claim that Biden will ban fracking.

“I’m not shutting down oil fields; I’m not eliminating fracking,” he said. “I’m investing in clean energy and we’re going to make sure that we don’t continue to subsidize the oil companies.”

Both candidates will be campaigning in Midwestern states this week.

More than 3 million in Pennsylvania apply for mail-in ballots