(Waukesha, Wis.) — President Donald Trump assured supporters packed shoulder to shoulder at a trio of rallies Saturday that “we’re rounding the turn” on the coronavirus and mocked challenger Joe Biden for raising alarms about the pandemic, despite surging cases around the country and more positive infections at the White House.

Trump’s remarks came hours before the White House announced that a top aide to Vice President Mike Pence had tested positive for the virus. Pence has been in close contact with the adviser, the White House said, but still planned to keep traveling and holding rallies around the country.

The revelation of another high-ranking administration official testing positive for the virus coupled with the administration’s decision to continue business as usual punctuated a day that was marked the starkly different approaches that Trump and Biden are taking to campaigning in the age of the novel coronavirus.

Pence’s office confirmed late Saturday that his chief of staff, Marc Short, had tested positive — the public announcement coming just as Trump was wrapping up a day of big rallies in North Carolina, Ohio and Wisconsin, three battleground states that will have enormous impact on deciding the Nov. 3 election.

Pence is considered a “close contact” under Centers for Disease Control and Prevention guidelines, but will continue to campaign, his spokesman said. “In consultation with the White House Medical Unit, the Vice President will maintain his schedule in accordance with the CDC guidelines for essential personnel,” Pence spokesman Devin O’Malley said. The guidelines require that essential workers exposed to someone with the coronavirus closely monitor for symptoms of COVID-19 and wear a mask whenever around other people.

O’Malley added that Pence and his wife, Karen Pence, both tested negative for the virus on Saturday “and remain in good health.” Pence, who held campaign events in Florida on Saturday, is set to campaign in North Carolina on Sunday.

The revelation bookended a day in which Biden and Trump demonstrated remarkably different attitudes about what they saw as safe behavior in the homestretch of a campaign that, as with all aspects of American life, has been upended by the pandemic.

“We don’t want to become superspreaders,” Biden told supporters at a “drive-in” rally Saturday in Bucks County, Pennsylvania, picking up a term that has been used to describe the Rose Garden event in late September in which Trump announced his latest Supreme Court nominee. More than two dozen people linked to the White House have contracted COVID-19 since that gathering, as have campaign aides. Trump spent more than three days hospitalized at Walter Reed Military Medical Center after becoming stricken. 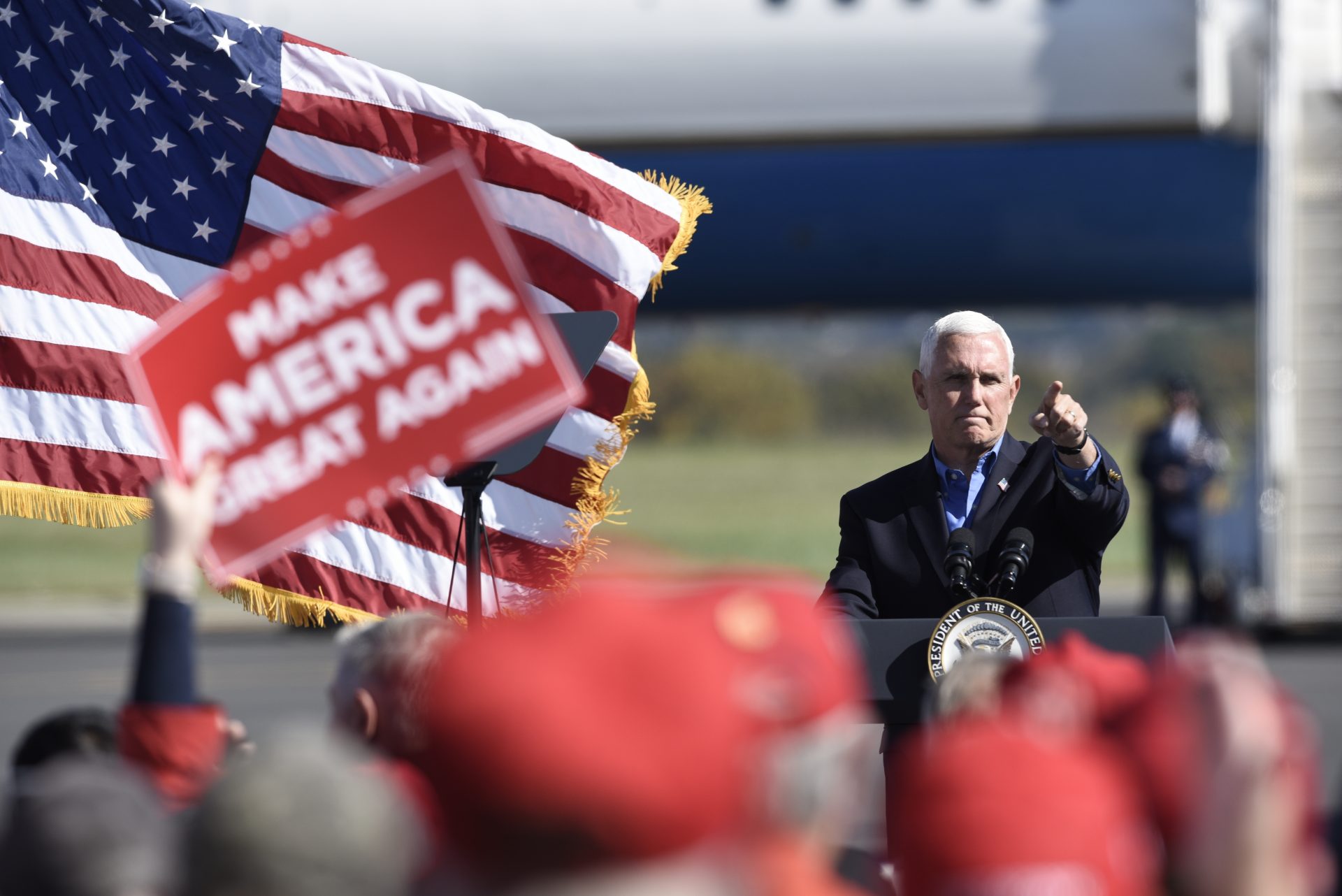 Biden pressed his case that Trump was showing dangerous indifference to the surging virus on a day he looked to boost his candidacy with the star power of rock legend Jon Bon Jovi, who performed before Biden took the stage at a second drive-in rally in Luzerne County, Pennsylvania.

Meanwhile, in Lumberton, North Carolina, his tongue firmly in cheek, Trump called Biden “an inspiring guy” for raising alarm about the pandemic. The president said that he watched Biden’s Bucks County rally as he flew to North Carolina and sarcastically observed that it appeared attendees, who were in their cars, weren’t properly socially distancing.

Trump at his rallies repeatedly criticized the news media for focusing on the virus, which has killed about 224,000 people in the United States and more than 1 million across the globe.

“It’s always cases, cases, cases. They don’t talk about deaths,” Trump complained to a crowd of several thousand at an outdoor rally in Circleville Ohio, where few wore masks even as they stood and sat shoulder to shoulder. “They’re trying to scare everybody,” he said.

Trump emerged from his own illness with even greater certitude that the nation has gone too far with efforts to stem the virus, and has spoken out repeatedly that children should be in school and healthy Americans should get back to normal life with limited restrictions.

Pence has generally been more measured in public commentary about the virus. Still, he has echoed Trump’s impatience at times and sought to contrast Trump’s push to reopen the economy with Biden’s caution, including during a campaign stop in Lakeland, Florida. just hours before the White House confirmed his top adviser had tested positive.

“When Joe Biden is talking about shutting down our economy, we are opening up America again,” Pence said.

Saskia Popescu, an infectious disease expert at George Mason University, called Pence’s decision to continue campaign travel “grossly negligent” and suggested that campaigning was a stretch of the CDC’s guidance for essential worker. 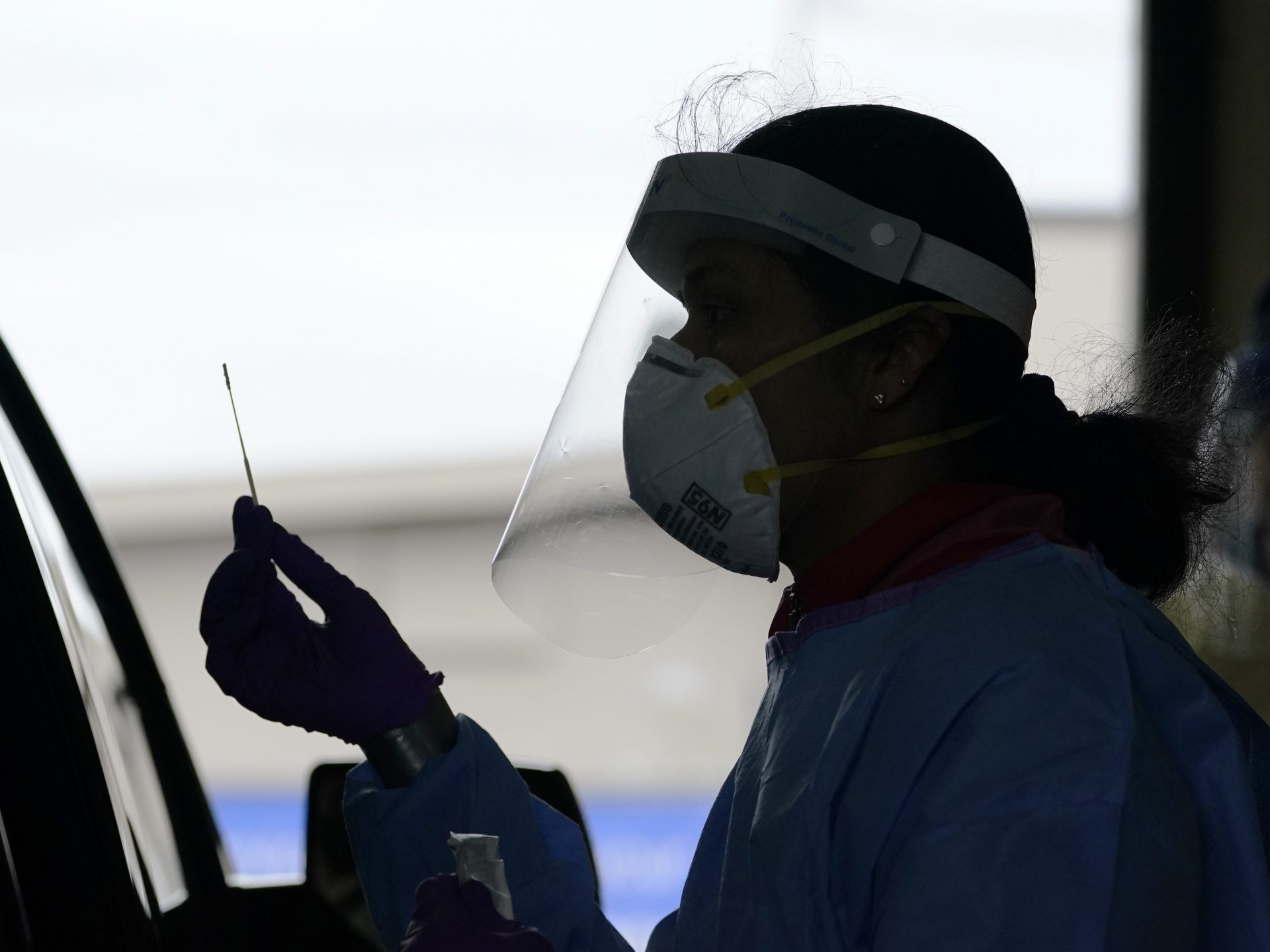 University of Washington research coordinator Rhoshni Prabhu holds up a swab after testing a passenger at a free COVID testing site Friday, Oct. 23, 2020, in Seattle. The United States is approaching a record for the number of new daily coronavirus cases in the latest ominous sign about the disease’s grip on the nation, as states from Connecticut to Idaho reel under the surge. (AP Photo/Elaine Thompson)

“It’s just an insult to everybody who has been working in public health and public health response,” she said. “I also find it really harmful and disrespectful to the people going to the rally” and the people on Pence’s own staff who will accompany him.

In North Carolina on Saturday, Trump questioned the value of testing, taking a stance in opposition to public health experts across the globe.

The rise in coronavirus cases is an ominous sign the disease still has a firm grip on the nation that has more confirmed virus-related deaths and infections than any other in the world. Many states say hospitals are running out of space in areas where the pandemic seemed remote only months ago. And in addition to the spike in cases, in many parts of the country, the percentage of people who are testing positive for COVID-19 is up as well.

Trump went further, pushing a conspiracy theory that hospitals are over-classifying coronavirus deaths because “doctors get more money and hospitals get more money” — even though there is no evidence of that and experts say the count is likely under-reported.

The U.S. and its reporting systems, “are really not doing it right,” he claimed. “They have things a little bit backwards.”

As he dug in on his defense on the panic, Trump also criticized Biden for saying that the country was headed for a “dark winter” because of the pandemic — the scenario of a surge in infections that health experts have warned about for months.

“I thought Sleepy Joe was very dark,” he told his biggest crowd of the day at a night-time rally in Waukesha, Wisconsin. “How dark was that? How horrible was that?” he asked.

A record of more than 83,000 infections were reported on Friday alone.

Biden in his stop in Luzerne reminded supporters that Trump had suggested the COVID-19 mortality rate was lower outside predominantly Democratic states.

“Where does this guy come from?” Biden said.

The president has repeatedly accused Biden and other Democrats of pushing measures that are worse than the coronavirus itself by advocating for social distancing and limits on gatherings that Trump says wreak havoc on the economy.

Biden, in an interview with Pod Save America aired Saturday, said his first priority was to “get control of the virus” because the economy can’t move forward without stemming the disease.

“As I said before, I will shut down the virus, not the economy,” Biden said in Bucks County. “We can walk and chew gum at the same time, and build back better than before.”

Universal mask wearing could save some 130,000 lives in the U.S., study suggests