A worker organizes mail ballots in Chester County. Pennsylvania counties have been flooded with mail ballot requests, and the days-long process of counting them can’t begin until Election Day under current state law.

The processing of mail ballots can’t begin until 7 a.m. on Election Day 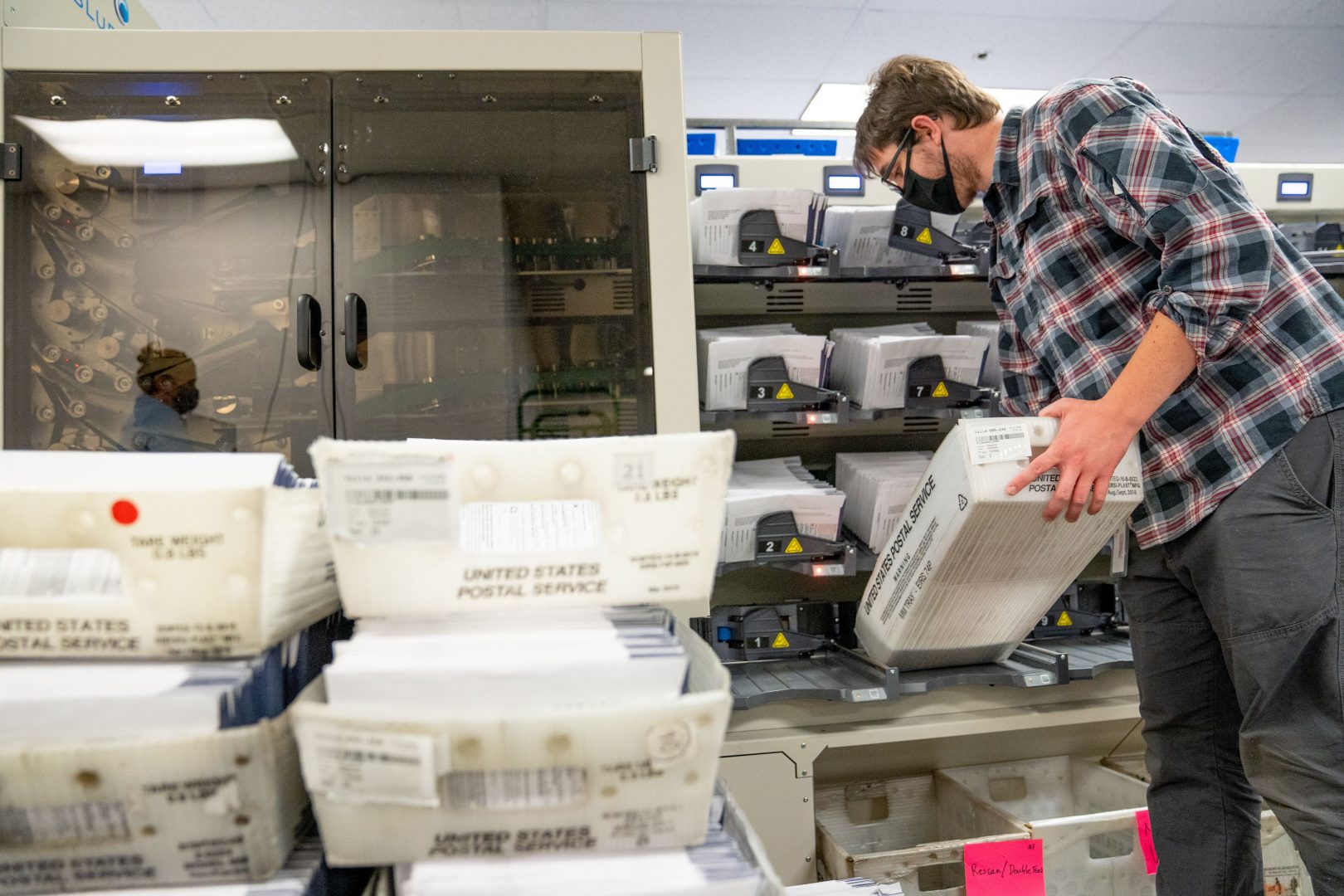 A worker organizes mail ballots in Chester County. Pennsylvania counties have been flooded with mail ballot requests, and the days-long process of counting them can’t begin until Election Day under current state law.

(Harrisburg) — Negotiations between the Republican-led legislature and Gov. Tom Wolf to let counties begin opening mail ballots in Pennsylvania before Election Day appeared to collapse Wednesday, setting up a potential nightmare scenario that some fear could leave the state counting millions of ballots for days after Nov. 3.

The Democratic governor and legislative leaders had been negotiating behind closed doors as recently as Tuesday to change the election code after months of inaction. But the General Assembly adjourned Wednesday and is not scheduled to reconvene until Nov. 10, a week after the election.

In adjourning, Republicans turned away pleas from county elections officials across the state, who said allowing them to open ballots before Election Day would reduce staffing strain and administrative headaches on top of whatever issues they’re dealing with during in-person voting.

Without a deal, the days-long process of counting mail ballots can’t begin until 7 a.m. on Election Day, potentially leaving the results unclear for days and opening room for candidates to falsely declare victory. Still, Pennsylvania’s top election official said Monday she’s confident the “overwhelming majority” of ballots would be counted by the Friday after Nov. 3.

As the day ended, both sides were left pointing fingers.

“[T]he Republican leadership of the General Assembly has failed to pass legislation to ensure that election results will be known promptly after the November 3rd presidential election,” Wolf spokesperson Lyndsay Kensinger said.

The collapse comes less than two weeks before a historic and divisive presidential election, conducted under a pandemic and in one of the few states widely predicted to determine the outcome. It also leaves county elections offices facing the daunting task of quickly counting what the Pennsylvania Department of State estimates could be three million mail ballots.

All sides left open the slightest possibility of an eleventh-hour deal late Wednesday. Jennifer Kocher, a spokesperson for Senate Republicans, said the chamber is not scheduled to meet again before Election Day “at this time.”

House Republican spokesperson Jason Gottesman declared “nothing is dead until it’s dead,” and said that if Wolf “were to reach out again we would be happy to continue talking.”

Negotiations stalled mid-September after the state Supreme Court ruled to extend to Nov. 6 — three days after Election Day — the deadline for certain mailed ballots. But hopes were high two weeks ago, when House Republicans participated in a call to discuss giving some counties a few days to do what’s known as “pre-canvasing” ballots — preparing them for tallying — while also codifying drop-box safeguards.

House Republicans had passed a bill to the Senate that would have allowed counties three days before Election Day to count mail ballots. But it also would have also allowed partisan poll watchers to drive across the state and work in counties where they were not registered to vote, something President Donald Trump’s campaign had pushed for in court and which Democrats and election watchdog groups oppose.

On Monday, Gottesman signaled in a statement that negotiations had gone nowhere.

“Given that the governor has not put anything on the table that can get through our caucus and has once again removed himself from the process of discussing the issue, we have no plans at this time to consider changes to the election code that will affect the upcoming election,” he said then.

But talks continued into Tuesday, according to a person familiar with the negotiations but not authorized to discuss them. They did not yield a deal.

“The governor and the legislature spectacularly failed the voters by not coming to some sort of agreement on this issue,” Forrest Lehman, the director of elections in Lycoming County, said Wednesday night.

Lehman said counties have been asking the legislature for pre-canvassing and other changes since April, “so nobody can pretend that they didn’t have enough time.”

Counties big and small, led by Republicans and Democrats, he said, all agreed on the need to allow ballots to be processed before Election Day: “I feel like this was a historical moment. We really needed something from them, and they didn’t live up to the moment.”