In oral argument, the justices focused questions on whether the plaintiff waited too long to sue the Roman Catholic Diocese of Altoona-Johnstown.

(Harrisburg) — Pennsylvania’s highest court on Tuesday grappled with whether a woman’s lawsuit on claims of sexual abuse by a priest decades ago should be allowed to proceed — a lower-court ruling that has launched many other lawsuits since it was issued a year ago.

In oral argument, the justices focused questions on whether the plaintiff, Renee Rice, waited too long to sue the Roman Catholic Diocese of Altoona-Johnstown.

Rice has argued that a 2016 grand jury report alerted her to allegations that church officials’ silence about a priest who she says molested her amounted to fraudulent concealment.

The 2016 report in Altoona-Johnstown preceded the wider 2018 report that found decades of sexual attacks on children by priest in other Pennsylvania dioceses.

Eric Anderson, lawyer for the diocese and two now-deceased bishops, but not the Rev. Charles F. Bodziak, the priest Rice says abused her, told the justices that Rice had a duty to pursue the matter once she realized she had been harmed, was aware of who did it and knew where he worked. 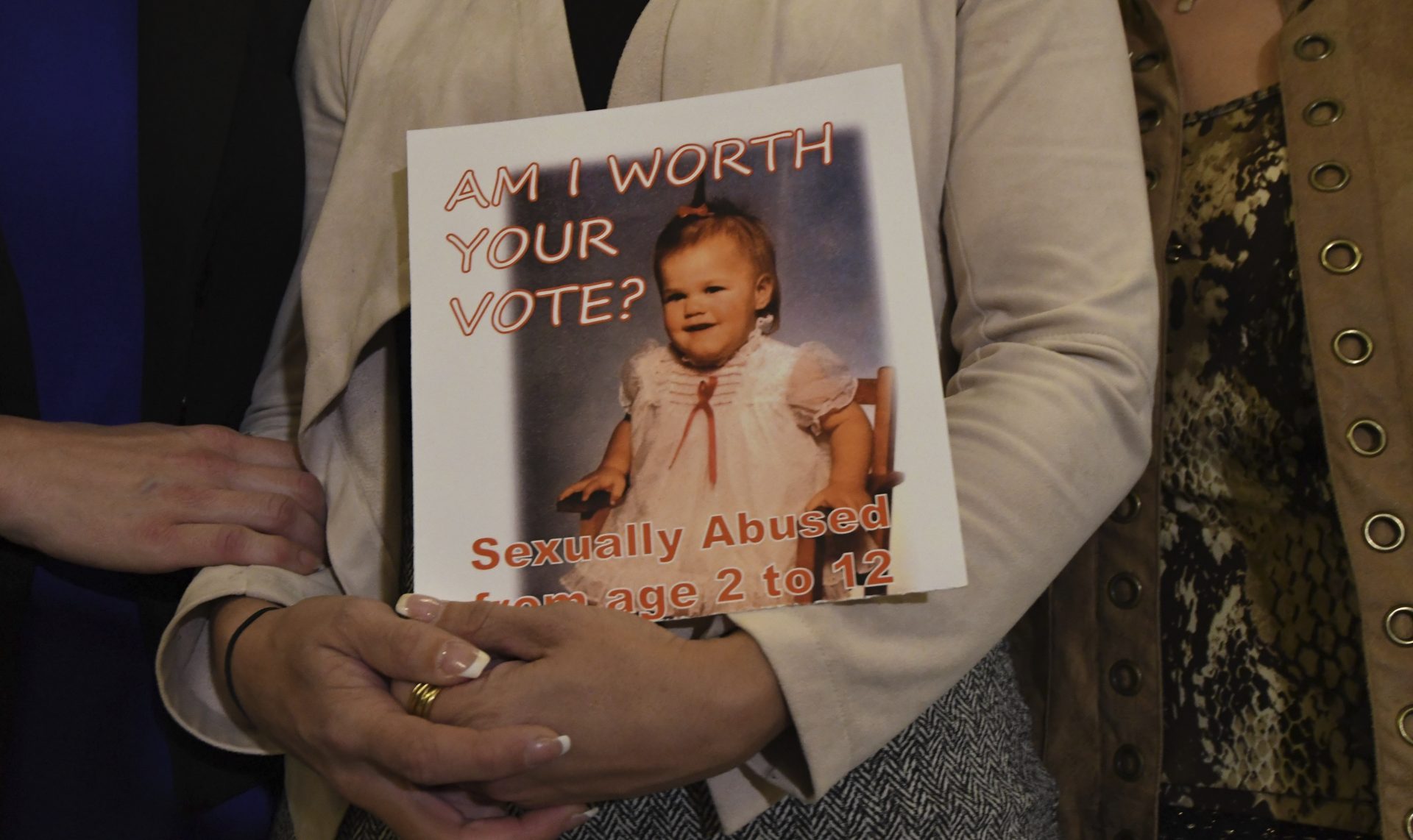 FILE PHOTO: Carolyn Fortney, a survivor of sexual abuse at the hands of her family’s Roman Catholic parish priest as a child, awaits legislation in the Pennsylvania Capitol to respond to a landmark state grand jury report on child sexual abuse in the Catholic Church, Wednesday, Oct. 17, 2018 in Harrisburg.

“Once she knows those salient elements or facts, then she has to make the effort to conduct the investigation,” and possibly sue, Anderson argued. “Then she can explore all claims she has against potential defendants. And there’s no evidence she did anything like that.”

Rice’s lawyer, Alan Perer, said there is disagreement about what Rice knew and whether she responded properly, a dispute that he argued a jury should sort out.

“She alleges she did not know and it was not reasonably knowable that the diocese was the cause of her injury until she read the 2016 report,” Perer said.

The Associated Press typically does not name people who say they are victims of sexual assault unless they want to be identified, as Rice has indicated she does. Now in her 50s, Rice claims the abuse occurred for several years when she was a child, ending in 1981.

She claims Bodziak abused her while a parish priest at St. Leo’s Church in Altoona, including attacks in the choir loft, a car and a cemetery. Bodziak has denied her allegations. Rice’s lawsuit was dismissed by a county judge in 2017 because of the statute of limitations.

Her lawsuit also claims the bishops and diocese knew or should have known Bodziak molested girls when they assigned him to St. Leo’s.

The court is considering whether last year’s Superior Court decision improperly did away with the statute of limitations and a discovery rule for civil actions. It also will decide how long the church and church officials were obligated to disclose what they may have known about Bodziak.

The lower court ruled Rice can try to persuade a jury that church officials’ silence about the priest amounted to fraudulent concealment and the diocese may have “induced” her “to relax her vigilance or to deviate from her right of inquiry” by not disclosing information about Bodziak’s history or by efforts to cover it up, the Superior Court said.

The Pennsylvania Legislature passed changes a year ago on legal handling of future abuse allegations, giving prosecutors more time to pursue cases and victims more time to sue. Legislation to set up a retroactive two-year “window” for otherwise time-barred lawsuits failed, but lawmakers instead began the process of amending the state constitution to allow the lawsuit window.