Philadelphia resident Dexter Ayres pauses after speaking with The Associated Press outside his contracting job site, Wednesday, Oct. 14, 2020, in west Philadelphia. Philadelphia has been the cornerstone of Democratic victories in the battleground state — producing Democratic margins so massive that winning statewide has been longshot for most Republicans. But it's a longshot Donald Trump pulled off in 2016 and is trying to repeat again. (AP Photo/Matt Slocum)

His debate stage disdain for the City of Brotherly Love quickly inspired memes and T-shirts.

(Philadelphia)  —  When President Donald Trump told the world that “bad things happen in Philadelphia,” it was, in part, a blunt assessment of his party’s struggles in the nation’s sixth-most populous city.

For decades, Philadelphia has been the cornerstone of Democratic victories in the battleground state — producing Democratic margins so massive that winning statewide has been a longshot for most Republican presidential candidates.

But it’s a longshot Trump pulled off in 2016 and is trying to repeat again. His debate stage disdain for the City of Brotherly Love — which quickly inspired memes and T-shirts — underscored his campaign’s months-long effort to fight the blue tide that starts in the city.

And it came as Trump openly declared, citing no evidence, that the only way he can lose Pennsylvania to former Vice President Joe Biden is through a massive fraud engineered by Democrats in the city of 1.6 million.

But Trump can’t change the basic political math in the state: one in eight registered voters live in Philadelphia, a city that keeps delivering increasingly large Democratic margins, routinely provides one in five votes for Democratic presidential candidates and is spurring a leftward drift in the heavily populated suburbs around it.

Recent polls show Trump and Biden in a competitive race in Pennsylvania, or Biden ahead by single-digits in a state Trump won by just over 44,000 votes — less than a percentage point — in 2016.

Trump’s victory was the first by a Republican presidential candidate since 1988, and it shocked Pennsylvania Democrats to the core.

Brady predicted Philadelphia will carry the rest of Pennsylvania and produce a bigger margin of victory for Biden than the 475,000 it produced for Hillary Clinton in 2016. That gap was slightly smaller than the historic margins Obama had in 2008 and 2012.

The Biden campaign has several “voter activation” centers around the city, not to mention Biden’s campaign headquarters.

Thanks to a year-old state law that greatly expanded mail-in voting, people now have weeks to vote and turnout is brisk at newly opened election offices around the city where voters can fill out and cast ballots.

That is giving hope to Philadelphia Democrats, after the city’s predominantly Black wards did not turn out as strongly in 2016 for Clinton as they did for Obama, including some that delivered 10% fewer votes.

“The line went around the block,” state Rep. Chris Rabb, whose district is 70% Black, said of a newly opened election office there. “It was nothing that I’ve seen since 2008 and I’ve worked the polls for 16 years now.”

In a city that is 42% Black, the belief that Trump has fueled a racist surge is widely held.

Breaking up concrete on a contracting job at a west Philadelphia rowhouse this week, Dexter Ayres, a lifelong Democrat, said he already voted for Biden in hopes of improving how Black people are treated in America.

Some of his friends are skeptical that voting will change anything. Ayres, who is Black, admitted that makes him wonder, “Wow, why did I vote?”

“But then I look at it like: ‘Well, maybe my vote will make a difference,’” Ayres said. “I’m just praying and leaving it in God’s hands.”

Sitting on her front porch in west Philadelphia this week, Latoya Ratcliff, a Democrat, said she will vote for Biden, and sees more enthusiasm in her neighborhood to vote out Trump than in 2016 to vote for Hillary Clinton.

The defining issue for Ratcliff, who is Black, is racism.

“They understand a little more about getting out and getting that vote out,” said Ratcliff, 39. 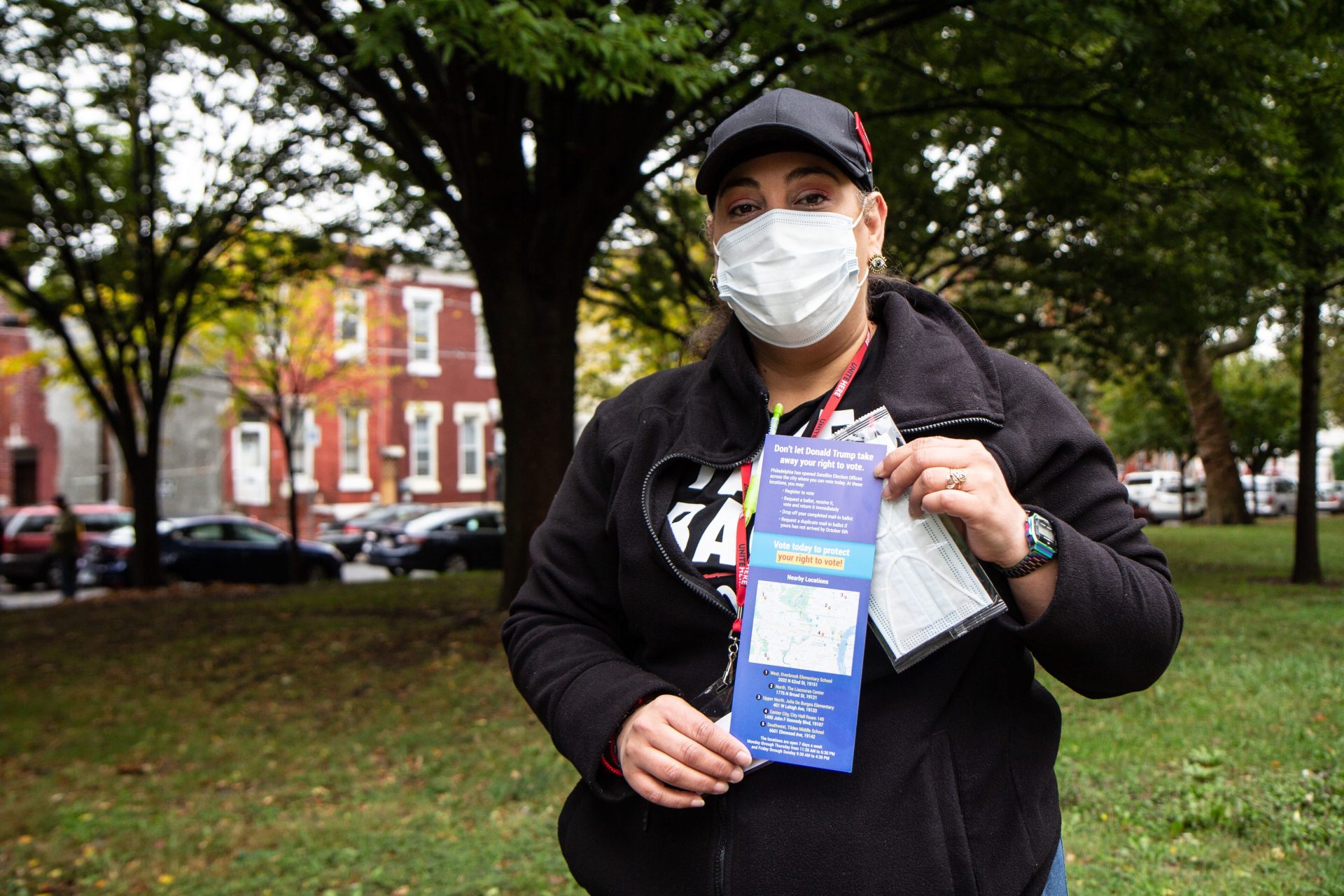 Iris Sanchez is a housekeeper in Atlantic City with Unite Here, out in Philadelphia Monday knocking on doors with information on how to vote.

In northeast Philadelphia, Trump saw unexpectedly strong support from an area with a reputation for being home to unionized building trades members, police officers and firefighters. Republicans say they now expect even stronger support for Trump there.

“Back the Blue” yard signs and thin-blue-line flags are everywhere in some neighborhoods, the city’s police union endorsed Trump again and the city’s firefighters and paramedics union also endorsed him, breaking with its international association’s endorsement of Biden.

Leaving his northeast Philadelphia home to go shopping recently, lifelong Democrat Joe Dowling said he will vote for Trump after backing Clinton four years ago. The issue that changed his mind, he said, has been the violence in the wake of George Floyd’s death and a backlash against police.

“It’s out of control,” said Dowling, 60, who is white. “There’s no reason for anybody to disrespect the police.”

Democrats acknowledge that they slipped in northeast Philadelphia in 2016 — the swing was about 11,000 voters from 2012.

Still, the area snapped back for Democrats in 2018 and U.S. Rep. Brendan Boyle, who represents it in Congress, said he expects Biden to do better there than Clinton.

He recalled a paper-shredding event his office last fall, attended by hundreds in the parking lot of the plumbers’ union office in northeast Philadelphia.

“I was surprised by the animus toward Trump, people unsolicited saying, ‘Gotta get him out of there, he’s a disaster,’” said Boyle, a Democrat. “And it was different. I wasn’t hearing that a few years earlier.”

Stephen Lomas, a long-time registered Republican who lives between two Trump supporters in northeast Philadelphia, said he will vote for Biden.

Lomas, 84, who is white, said Trump and members of his administration “are tearing down our belief in the system. … They’re out-and-out crooks. They’re almost traitors to our Constitution.”

Besides mail-in voting, another thing that is different in this presidential election is a network of allied liberal issues and community groups in Philadelphia, organizers say, with a long-term focus on reaching people unlikely to vote in predominantly Black and Latino neighborhoods.

Briheem Douglas, vice president of Unite Here Local 274, a union of casino, food service and hotel workers that supports Biden, said he is canvassing harder than ever before.

Douglas, 36, tells a personal story to everyone he meets who isn’t planning to vote: He is caring for the infant child of his 21-year-old niece, Brianna, who died in September from the coronvavirus.

“So I’m laser-focused on canvassing more than in 2016,” Douglas said.